I’ve described a bunch of situations as “white privilege” when I see cops talking politely to threatening-looking white people who have guns. For sure, white privilege is part of it, but I think there’s something more basic going on, as well. 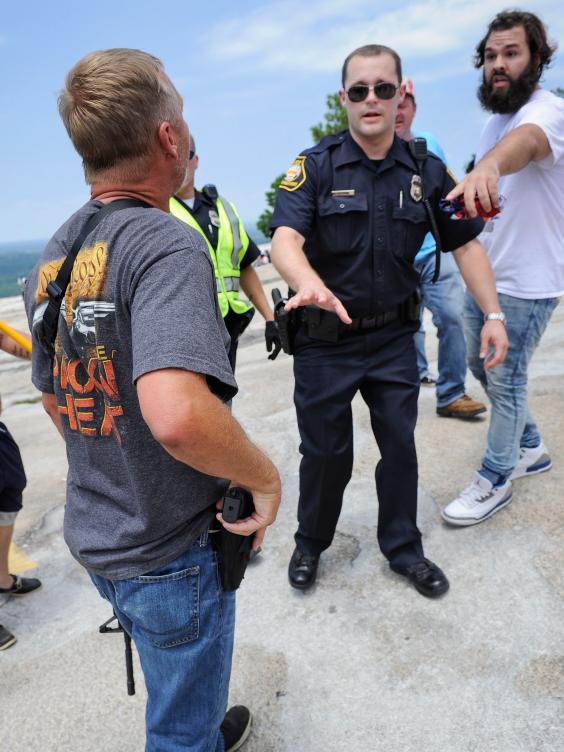 Do you think the cop would be reasoning with that guy if he was black? [source]

I think the cops are scared shitless of thugs with guns. And they respect them as peers, members of their tribe. It’s bad for business for rental tough-guys to be shooting at eachother, that’s not what they’re there for. They’re there to put their boot on the neck of poor people, and anyone who can walk around with a bunch of military-style semiautomatics is probably not a poor person. In other words, the situation is not just “white privilege” it’s a toxic brew of tribalism, class, and racism. 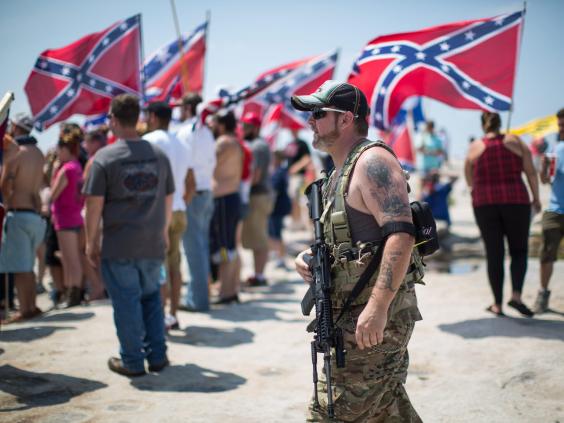 The visual in the top picture is pretty incredible, to me: that’s a guy with his hand on a gun; there’s a magazine in it (so we could assume it’s loaded) and he’s threatening a cop. The cop’s body language is conciliatory. “Now, there’s no need for that.”  It appears there were a lot of goons with guns running around at the event; again – the goober in tacticool clothing has a (regulated, but clearly not very well-regulated!) 30-round clip locked in his AR-style rifle. Loaded or not, there’s a lot of potentially scary firepower walking around out there. Cops shoot people all the time for being a lot less scary than that. Unless the cops are actually scared.

All that firepower appears to have had its intended effect, of making the cops think twice, or maybe even three times.

Is the driving factor “white privilege” or is it that cops are cowards that are at their most dangerous shooting unarmed, fleeing, people in the back? Seems like both. I sure as hell wouldn’t want to try to disarm the idiots running around with guns at that rally – any of them, including the cops. 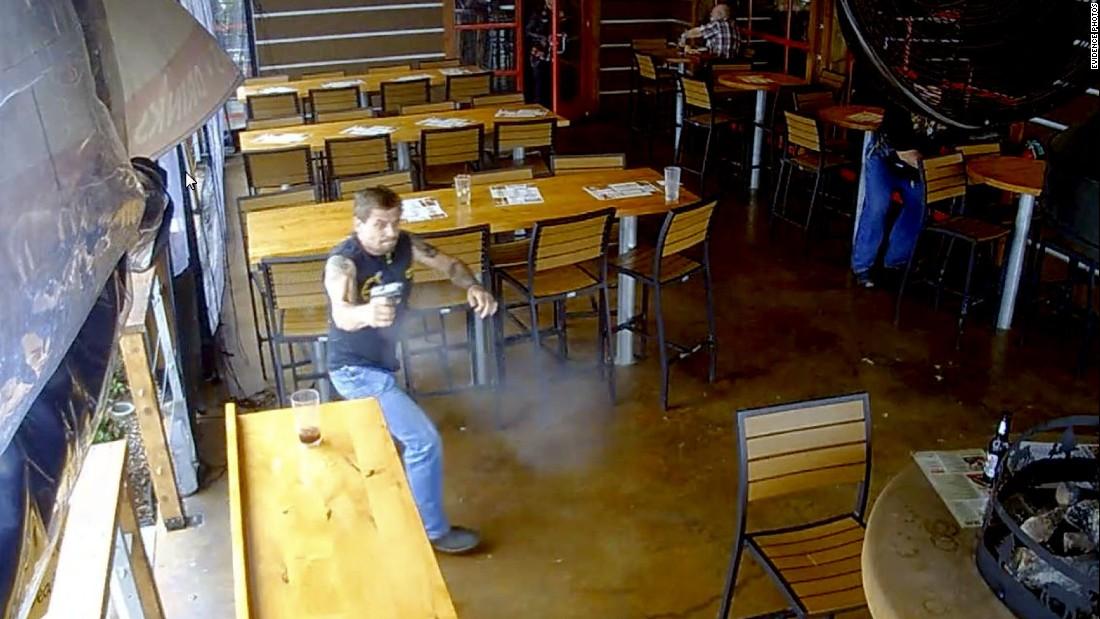 The gunfight between biker gangs in Waco, TX (2015) [cnn] was characterized by the SWAT team and an army of cops showing up and carefully disarming everyone. They collected a total of 480 weapons and arrested 177 people. Again, class may enter into it as much as white privilege: the biker gangs involved were hardly the classical “Hell’s Angels” gun-and-drug dirtbags – these guys look more like the roving packs of former investment bankers that I see on the highways sporting club colors “born to be wild” driving $20,000 Harleys. If you look at the pictures of the bikes, it looks like a Harley dealership, not the Road Warrior. They’re weekend bikers.

When I look at the proponents of organized racism in the flag rally, I see the same thing: they’re clean, well-dressed, and they’ve invested a lot of money in their gun-toting racist LARP weekend. 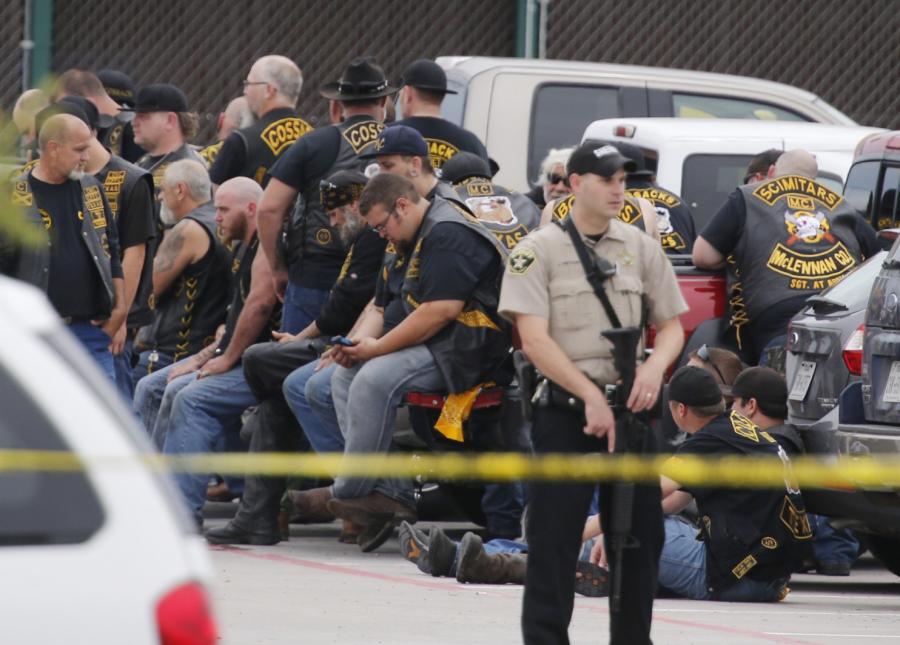 There’s another group that was well-armed and never got into a massive gun-battle with the police. The NRA hasn’t exactly stuck up for them, though the laws that banned open carry were specifically written in response to The Black Panthers’ habit of demonstrating that they were armed. Note the cop in the center/middle, who is not shooting at the scary black guys, as so many cops feel obligated to do. 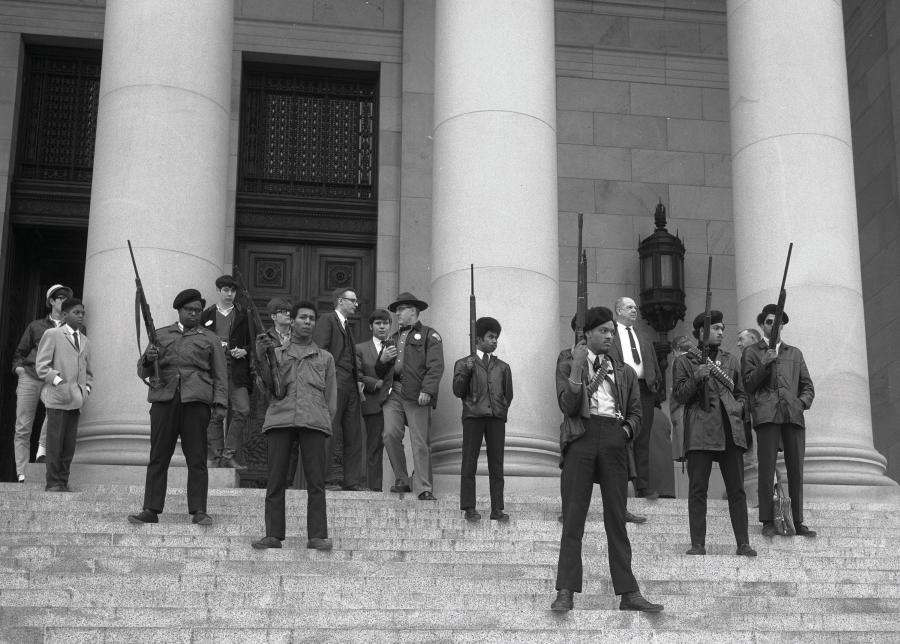 It’s not a straight divide along lines of “white privilege.” It seems more complex than that. First and foremost, the cops seem to generally be most fond of shooting people who are unarmed and have their back to the cop. After that, it’s people who are alone and unsupported; cops appear to be pretty careful around groups of armed civilians. Next, they asses your privilege – cops know that they are here to support the establishment, which means wealth. And somewhere in there, race also factors in.

One other thing that’s depressing about the reporting of the flag rally: it was organized by the KKK. You know, a terrorist organization that has claimed responsibility for a lot of incidents – it’s certainly killed more Americans than ISIS. Those who attended that rally can’t play the “pride in the flag” fig-leaf when the entire event was organized and promoted by a racial hate group.

By the way, it took a long time, but the bikers involved in the Waco shootout are slowly receiving “swift” and timely justice: their case has been being delayed over and over. [kwtx] Some 40 of them remain unindicted. The delay is because there’s also an ongoing federal investigation that bears on the case, and since some of the results of that investigation may be exculpatory, the whole trial gets put off until at least 2018. I’m willing to bet a couple of boxes of donuts that the biker gangs are pretty lawyered-up and it’s going to turn out to be cheaper to let them go. I’ll check back in on this case this time next year.

“Gun-toting racist LARP weekend” – I wonder when I’ll hear someone claim that they were just playing a role and they don’t really mean it, therefore it’s OK. I run into that a lot in gaming.

Lies National Geographic Told Me: Discoverer » « Monday Meslier: 28 – To Adore God is To Adore A Fiction