In an odd move, the Trump administration today declared “bump stocks” illegal. This was a perfectly common-sense response to a technology that was designed in order to bypass restrictions on automatic weapons.

There have been other devices intended to tread the line; I remember back in the 80s there were these little cams with a crank that you could install in the trigger guard of a rifle – then you turn the crank and it pushes the cam forward faster than one could pull a trigger with just a finger. Those were made illegal, too. Bump stocks are just another cheesy prank toy that tries to establish a gray area where there doesn’t need to be one. 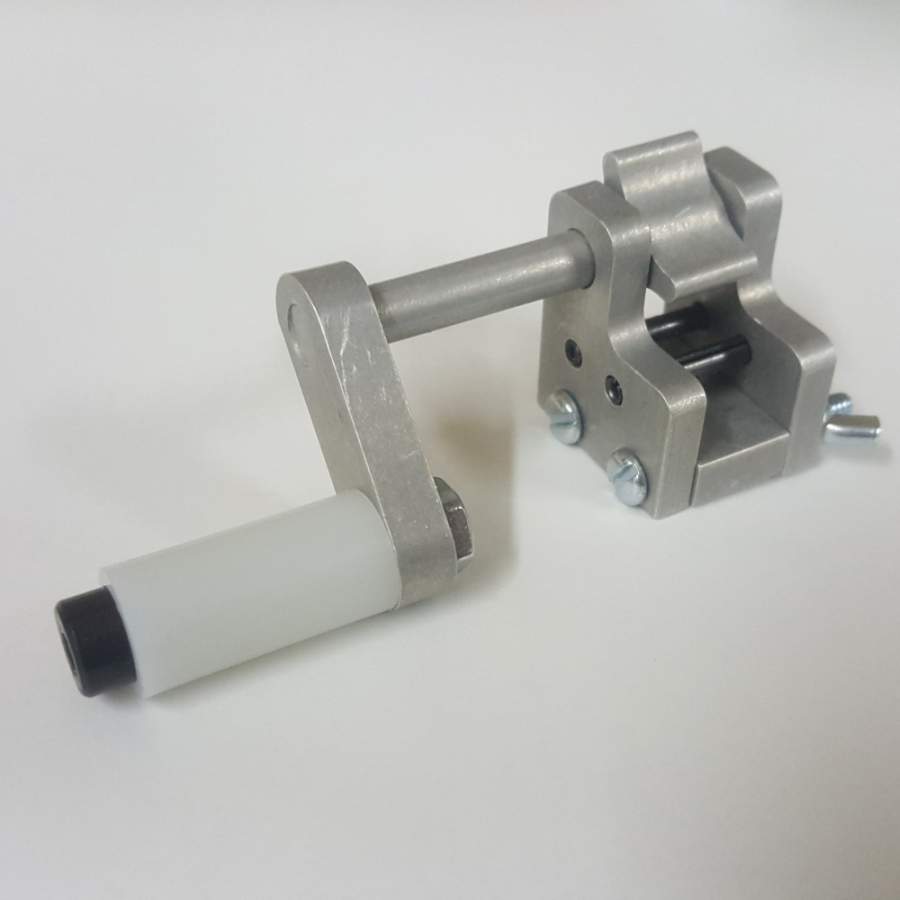 The “gat crank” – like an automatic rifle for chucklefucks

Apparently the “gat crank” lobby has managed to keep them legal except for in some states where the legislators are not complete assholes. Seriously, look at that thing and imagine trying to maintain a sight picture on a target while cranking that stupid machinist’s nightmare of an actuator? Somehow that wobbly kludge equates to a toxic masculinity buff for some gun owners. 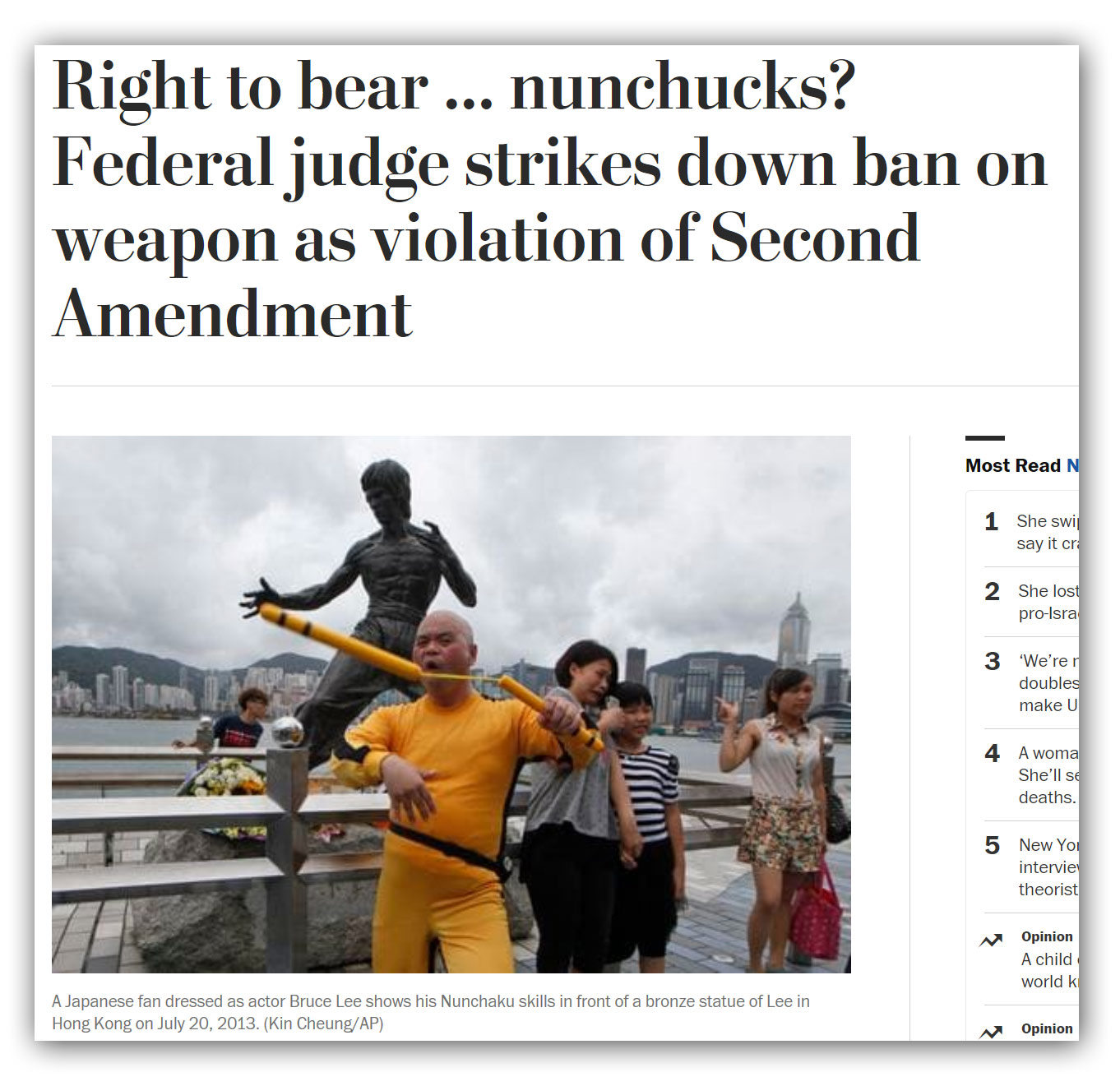 But America is the land of liberty. What the government taketh away, something else giveth, or something like that. In a blow for freedoms that we never actually wanted, a judge has determined that “nunchuks” (nunchaku) ought to be legal. I am sure this ruling was greeted with cries of despair and plaintive complaints of “activist judges!” 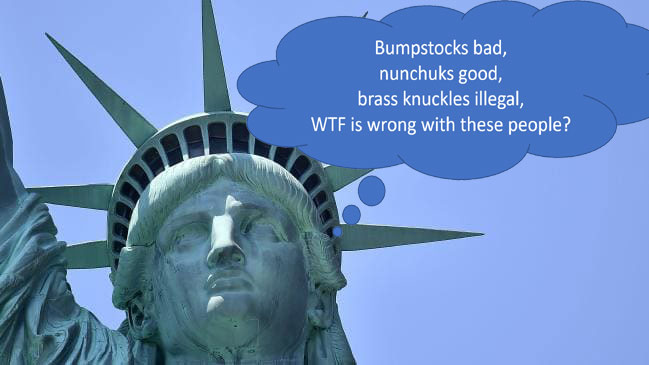 I remember when the nunchuk ban went into effect. There was a propaganda campaign about how the striking edge of the flail could generate 100 times the amount of force needed to crack a skull. Naturally, I asked my teacher how they had ascertained that. The real issue was explained over dinner by our next door neighbor, Dr. Worth D., who was the head of the teaching faculty in diagnostics at Johns Hopkins Hospital – he said “we get a lot of people in who have hit themselves in the head trying to use those things.” At that time I was a battojutsu snob and had already sparred with nunchuk users; I was able to say “they are a good way to get yourself hurt.”

The laws regarding weapons are – odd. You used to be able to buy “tannerite” high explosive (ammonium nitrate and aluminum) on amazon.com; you can still buy the precursors. You cannot buy “brass knuckles” but you can buy a carbon fiber cane with a great big stainless steel golf ball on top. In Pennsylvania, you cannot “make a dagger” unless you are a collector or a knife-maker.

Put all of this in the context of the endless stream of “tactical” spam I’ve been sharing with you, and the picture gets muddier: Americans want stuff that they’re told they can’t have. It’s around this time in the discussion that some rational person says “nobody needs a machine gun to hunt a deer!” but that’s missing the point: nobody in their right mind would want to hunt a deer with a machine gun in the first place. It’s not a matter of “need” it’s a matter of “I want it!” a primal scream of thoughtless desire, of exceptionalism. “I don’t care if nobody else can have it – in fact that makes me want it more because then I’ll have something they don’t have!”

It’s another day in America!

When I went through Basic Training (class of July 1983, Ft Dix, NJ!) I was amazed by how inaccurate automatic rifles are. Sure, I suppose if you were trying to make a great deal of noise and holes in things, then it makes sense, but mostly it seems to be a way to wear out a rifle and waste a lot of ammunition. I suppose I got my pointless displays out of my system at the taxpayers’ expense, so I can afford to sneer at this garbage.

Who needs a bumpstock when they can have a legal “as used by the military” tactical flashlight?

Pennsylvania laws: now I guess I need to find out if making a damasteel tactical spork is a felony around here.

The Withdrawal Method » « A Plethora of Wrong