We are often told we have “instincts” – behaviors that are wired into us through evolution and time. These instincts are different from operational functions like peristalsis (the rythmic clenching of our intestines) and … well, where’s the line? We’d like to think that walking is, maybe, an instinctive behavior but – has anyone who believes that ever had a baby? Is eating an instinctive behavior? Has anyone who believes that ever cleaned baby-projected food off the ceiling? It appears that there is a lot more learning going on than instinct.

Since my property is a safe zone against hunting, I have a pretty good population of critters that mostly get along. So everyone is pretty low-key, now that my dogs have retired from the woofing at things business. The dogs’ occasional chug-a-lug of a rabbit or dissection of a woodchuck has been replaced by the far more professional work of Dr Robert Cat, and Miss Coyote; their paw-prints are unseen except for the occasional tuft of former rabbit-fur.

Spring is when the herd of deer that live here drop their babies; and deer babies sure are adorable little nitwits.

The grass grows like mad in the spring mountain rains, so I have to mow the boundary that keeps the larger critters away from the house. Sometimes, when the baby toads from the pond are flushing all over the place, I just let it grow a few weeks; I don’t like killing things if I can help it and baby toads are really really cute. Then there are the larger babies: 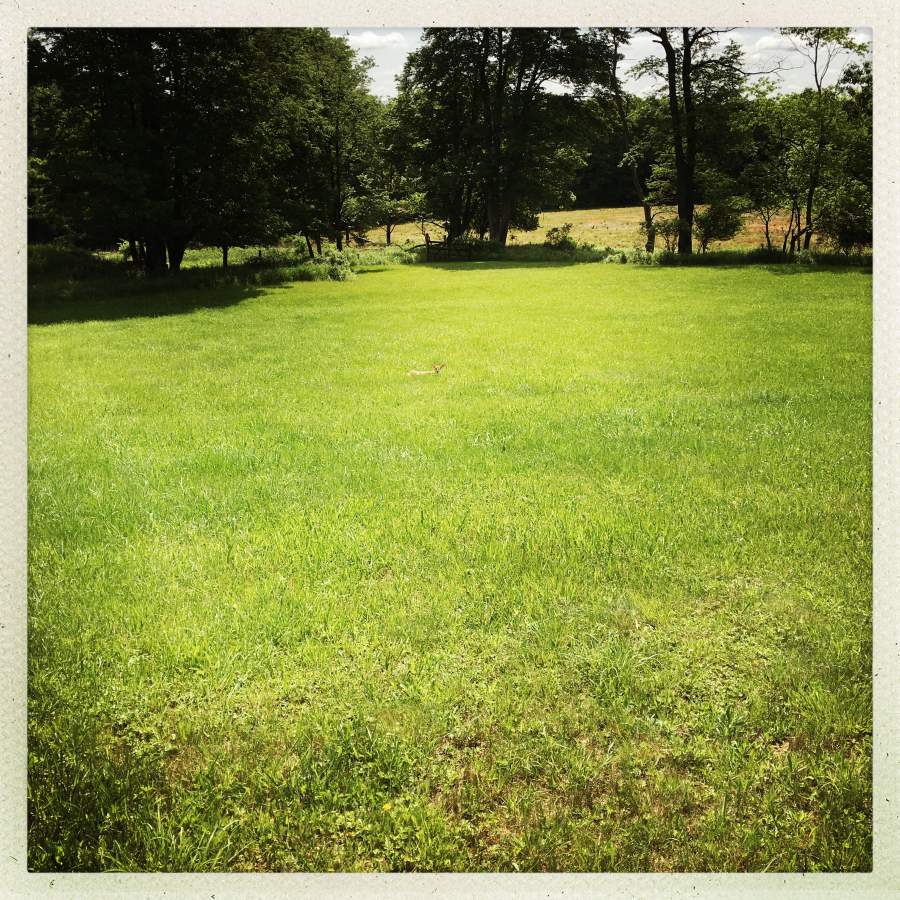 As usual for one of my photos, the interesting ${whatever} is in the center-vertical of the frame. See it? 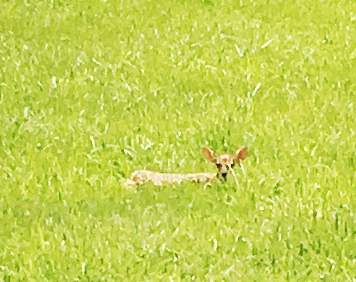 Those radar antenna ears are always a give-away. I have no idea why this particular baby thought that low grass was a good hangout. Later, as I was mowing along the tree-line, I startled two more babies, that burst awkwardly to upright and wobbled away.

So, as I mowed, I thought about learned behavior versus instinct, and how even animals like deer and horses, that are born to run, are born not knowing how to run very well at all. People say “horses are born knowing how to stand” but I don’t think those people have ever actually seen a newborn horse trying to stand. They’re adorable but they are not very good standers, let alone runners.

Neither are deer. When I got my phone out and started advancing to get a better picture, the baby jumped up and fell over, then jumped up again and totter-tumbled off to the treeline where I could see its mom waiting. I wonder if she’s the same deer who had her baby up in the treeline last year, or if a hunter got her, or she ran into a road and a car – deer maybe don’t have a very good life; the dappled sunlight of the woods and the sweet sun and scents of the fields, are probably just less misery than they could be, for a deer. 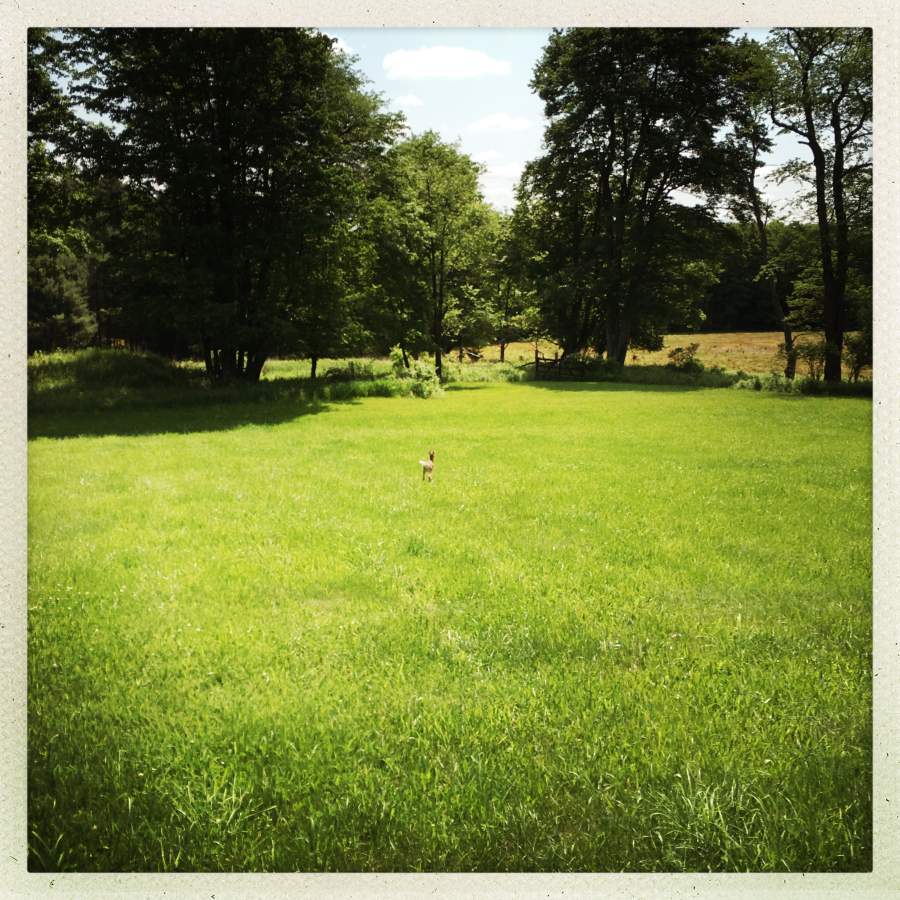 to the tune of Christopher Cross “ride like the wind”

There are other instincts – the mother deer’s ‘instinct’ is to leave her baby someplace safe while grazing or foraging. But are maternal ‘instincts’ really in the genes, or are they learned? Back between 2007 and 2009 I had a barn-cat who took up residence down with the horses, and had several litters of kittens (before I was finally able to trap her and have her spayed; and then she ran into the road some weeks later and that was the end of her) – that cat was a terrible mother: she kept having her litters in places where the kittens were easily accessible by owls and raccoons, or had deep places to fall into. I tried to intervene but she was down to one kitten in a couple weeks and then there were none. Some ‘instinct’. We learn that many first-time mother cats lose entire litters; perhaps being a mother cat is more learned behavior than instinct?

Baby deer are not born knowing how to run like the wind. Nor are baby horses. Perhaps an evolutionary psychologist might say “that’s a feature: it keeps a baby horse from running headlong away from its mother!” or some such nonsense. But even deer babies exhibit less than optimal behaviors: 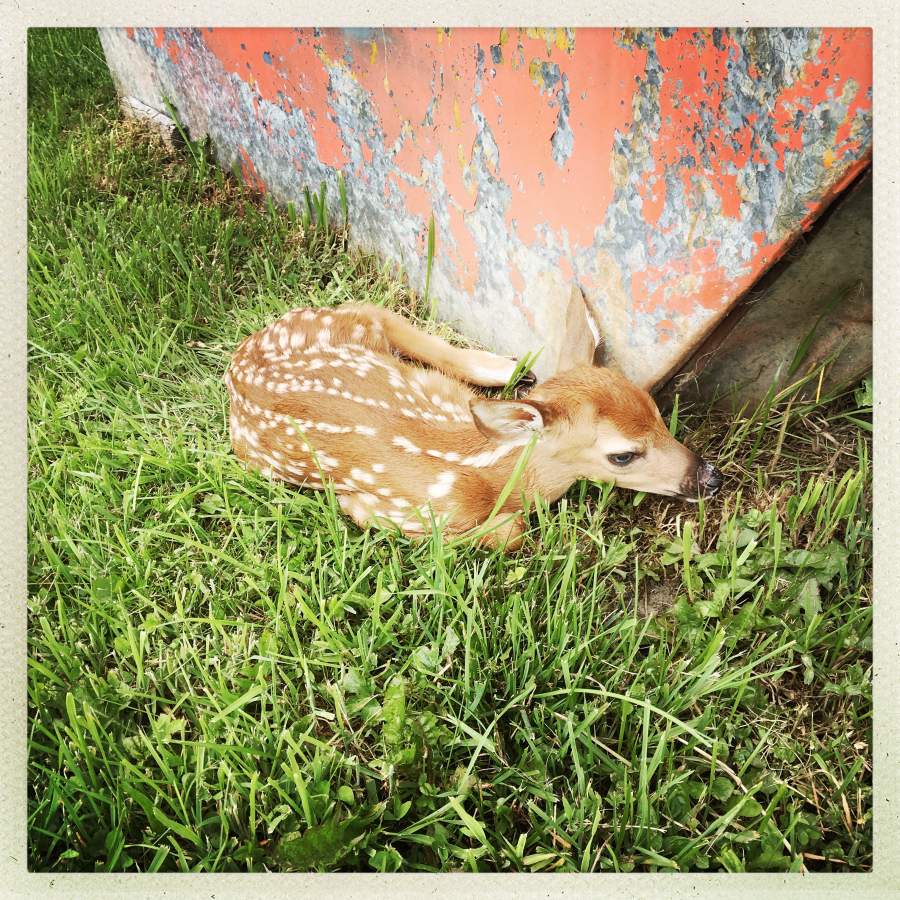 As I was driving to my shop, later, I noticed another deer baby hiding against the side of the garbage. I went over to check and see if it was OK and it seemed to be fine but didn’t have the ‘instinct’ to run, yet. I didn’t touch it, but it was tempting to feel that beautiful empty little head and velvety ears. Maybe I have instincts after all. I didn’t eat it, though, so maybe not.

The grubs are active this time of year, so Master Skunk comes out around dusk to hunt for them. He’s absolutely adorable – very serious, very studious, not very bright and can’t see so well. He stomps across the grass, pausing to dig and eat, then stomps off again. He does not like being photographed and usually vanishes pretty quickly but I’ll try to see if I can get a shot of him with the telephoto.

This week I’m going to be in Seattle speaking and moderating at IANS 2018. It’s a fun conference but for me it’s a lot of stage-time and being on my best behavior. I’m not sure if I’ll have time to write or not; my plan is to be home friday afternoon, though my plans are complicated by the death of my Honda’s alternator about 60 miles from my home – so I need to drive my big truck down to Washington airport and back, and hope it makes it, then loop by and pay the mechanic for the work on the Honda, and somehow get it home. My posting may be intermittent and I may not be responding in comments very much.

I gendered the coyote as a female because she’s got puppies, and they have “coyote committee” meetings in my yard under the moonlight, sometimes. It’s kind of hair-raising until you know what it is, then you can just smile and roll over and go back to sleep knowing all’s right in this little corner of the world.

Hanging Out in Bars » « Wow, That Sure is … inCONVENIENT…