One of the things I love about science is that it proceeds not just by learning what is true, or what works – but by learning what is not true or what does not work. Naturally, we’d all rather make great leaps of understanding, but sometimes we can learn a bit, and push things in a good direction if we can handle a bit of failure.

Today, I advanced the art of blade-smithing a tiny bit by discovering another thing that does not quite work.

When you’re trying to weld stainless steel and non-stainless steel, you need to prevent an oxide layer forming on the stainless; that’s how stainless keeps from rusting – like aluminum, it forms an invisibly thin, very tough, oxide layer that doesn’t react any further and which shelters the rest of the metal from atmosphere. The problem is it’s hard to weld to that oxide layer. With a MIG (metal inert gas) welder you are using an electric arc to bring a small part of the metal to welding temperature under a bubble of argon or other shielding gas, which prevents that oxide layer from forming, and the weld takes.

If you’re trying to make a thing called “San Mai” you want to take two pieces of stainless steel and weld them as facings onto a piece of high carbon steel. It’s a cool technique and you get some beautiful effects. This is not a blade I made: 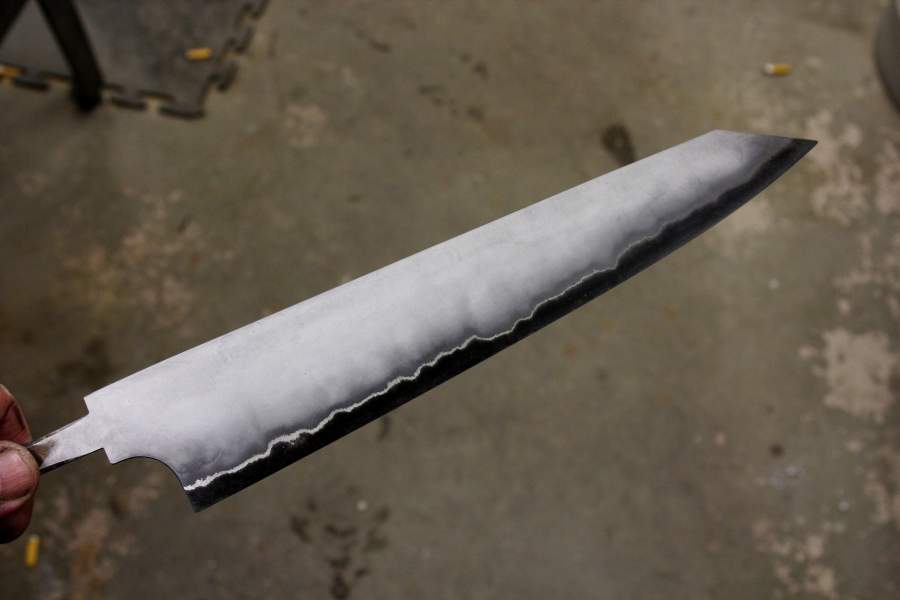 I suspect the HHH knife has a bit of nickel in the area between the stainless and the high carbon steel; that’s a popular trick: it looks great and the nickel acts sort of like a very very strong solder.

Making san mai is a pain; some blade-smiths stack the pieces of metal then run a weld all the way around the sides, to keep the air from getting between the slices. It’s labor-intensive, and you have to grind the weld off later, which is also a great pain in the neck. Then, I was drifting in and out of consciousness on the airplane to LA, thinking about beating on hot metal, and an idea occurred to me: mokume gane! The way mokume gane is made, you press it so that there’s basically zero atmosphere between the plates. Then, another idea occurred to me: furnace cement. 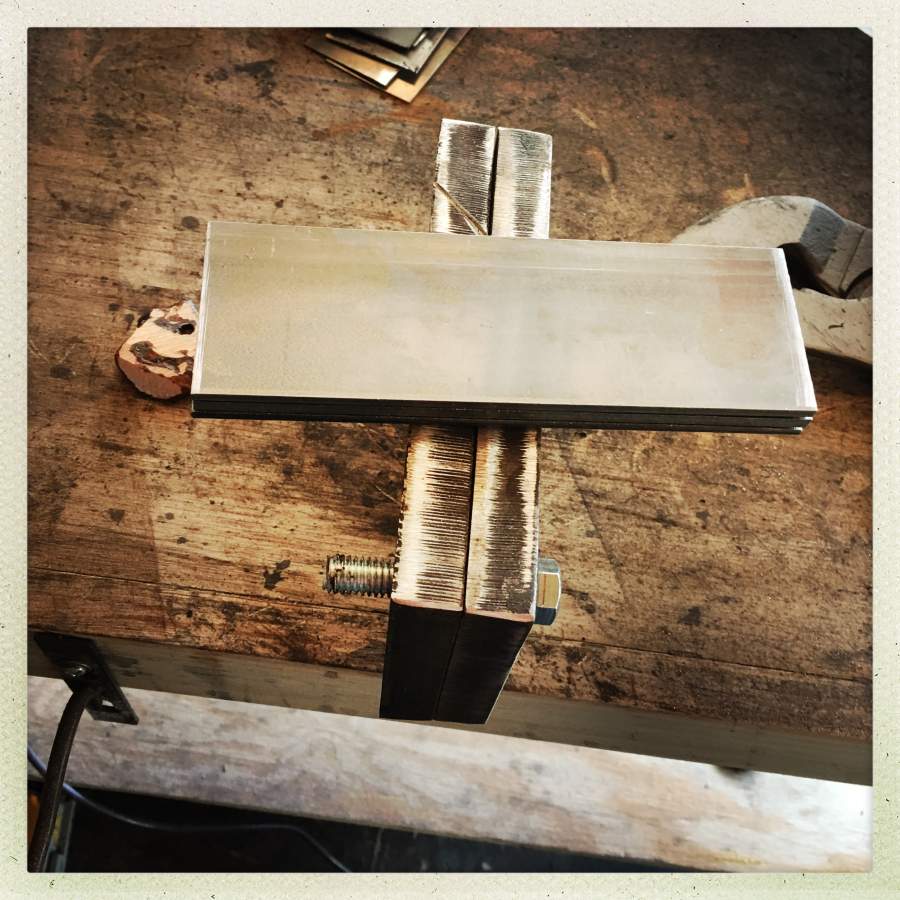 Two pieces of 304 stainless steel and a piece of 1095 high carbon steel. The thing they are resting on is my prototype “Simple San Mai” press – it’s just two blocks of 6×3″ 5/8″ thick mild steel that I got four pieces of on ebay for $10. The US Postal Service has these “flat rate” boxes for VHS cassettes and a lot of metal moves around in those; you can imagine how much the postmistress in Morrisdale appreciates occasionally picking up a little box (always for Marcus) that weighs 20lbs. The press was a snap to make on the milling machine – nice precise holes on demand is what milling machines are for. 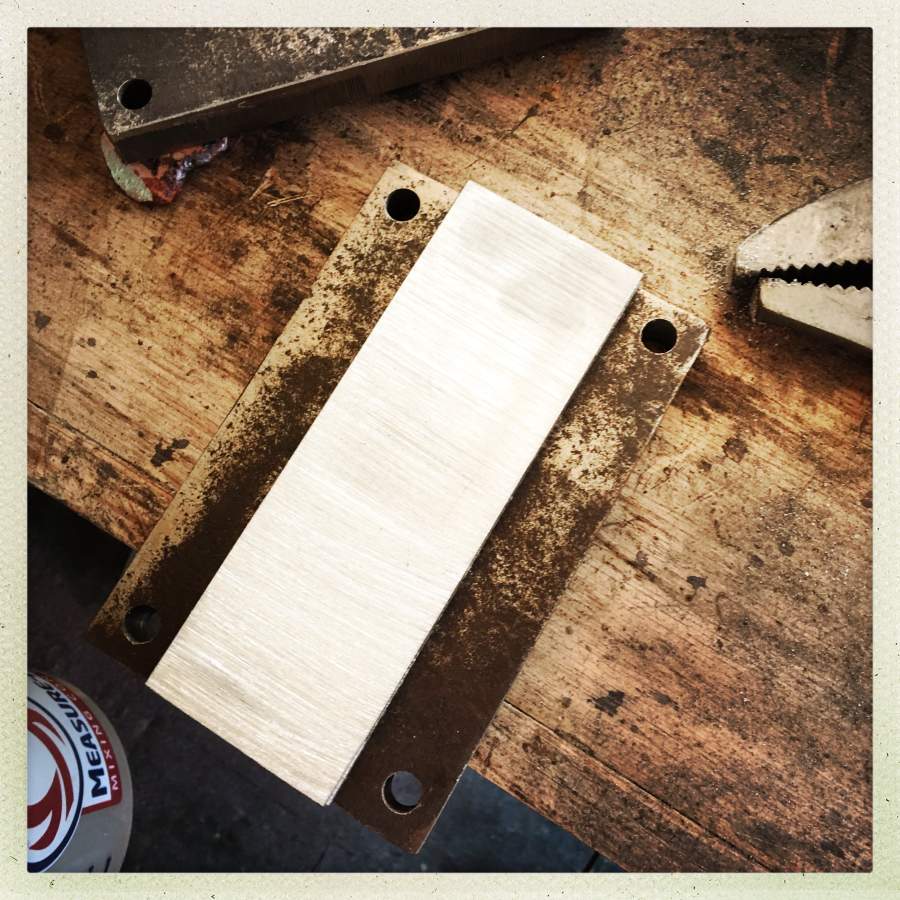 I surface-ground the pieces of steel, then bolted the stack between the plates and tightened the bolts until they absolutely would not budge any further. Then, I took a small paintbrush and painted furnace cement around the cracks in the edges of the steel stack, to keep air out.

Part of my reasoning behind the huge steel plates for the press: thermal mass. One thing that helps screws up your welds is when you put the metal on an anvil and it immediately begins to transfer its heat into the anvil – if it drops below welding temperature, you have just wasted your time. So, I was thinking a great big thermal mass with my stack of air-proofed steel in the middle: sure-fire winner! 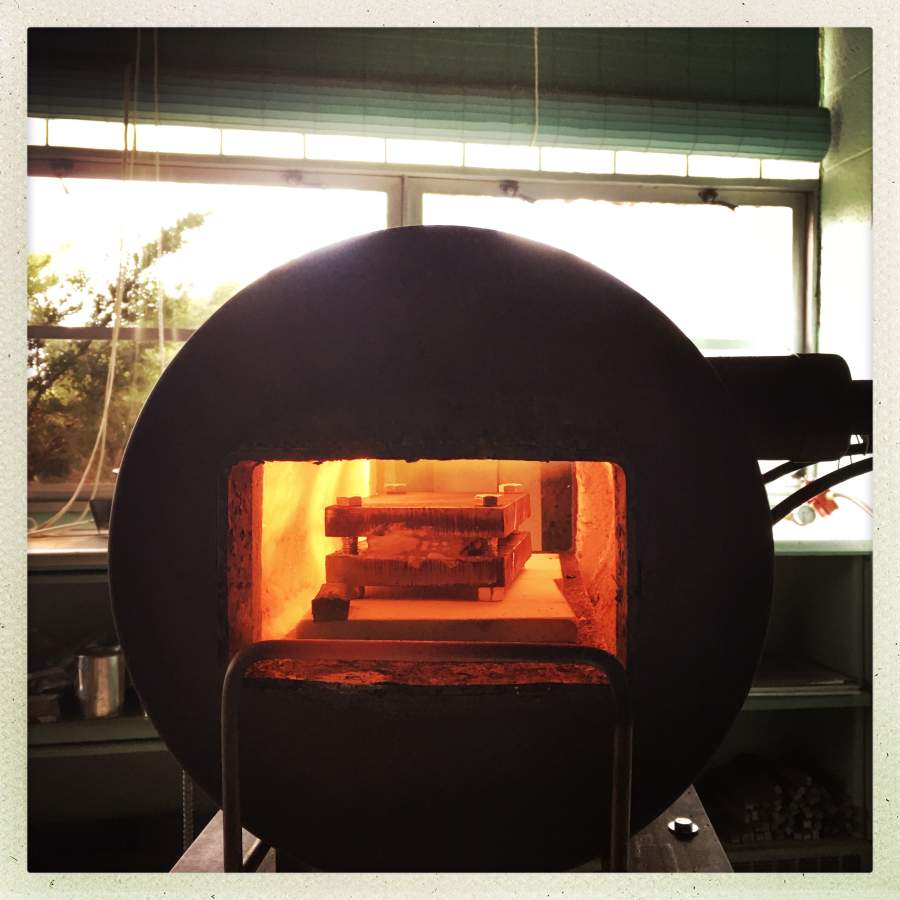 Then, I let the whole thing soak in 2300F+ heat for a while until it came up yellow/orange. Because I was busy doing some other stuff, I forgot to take as many pictures of this process as I should have.

Here you can see the furnace cement dried rapidly and foamed up a bit. But: so what? It’s disposable and it’s $20 for a half gallon – very very much easier to get off a bar of steel than welds. The chunk of stuff in the lower right is a chunk of damascus I was forming for another experiment (smaller pieces heat and cool faster so you can work at different time-scales on multiple projects).

When the moment was right, I brought the whole mass out – it’s about 7kg/15lb – put it on the anvil – and gave it a bunch of good raps with my hammer to set the weld. I was happy to see that it held its temperature a good long time, so I gave it some great poundings after the initial rapping. Then (while it was still glowing malevolently on the anvil) I used a cut-off saw to grind through the bolts at the corners. The moment of truth had arrived!

The top didn’t want to come off, so I took it over to the vise and used a pry-bar on it, carefully. The red-hot top piece popped off. The bottom did not. It’s stuck there like it’s welded… uh… it is welded. 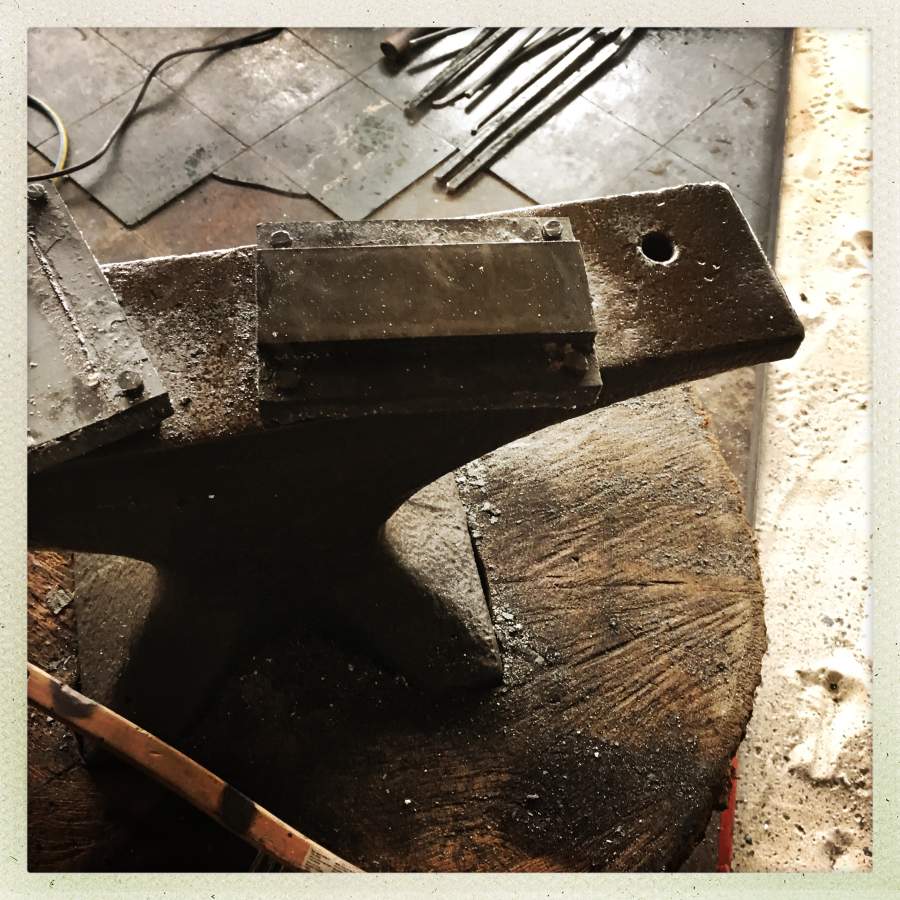 In fact, I got one more excellent weld than I had bargained for: the billet is permanently married to the crusher. It’s a beautiful weld. The bars are beautifully welded, too. What Marcus has joined, let no one put asunder.

So, I would say I have almost invented a vastly simpler way of reliably making san mai. Obviously, the only thing I need to do is repeat the experiment, using a thin coat of furnace cement on the top and bottom of my billet as well. Furnace cement appears to be a good “weld resist” – at forging temperature it prevents metal from sticking to other metal. Some smiths use White-Out(tm) for that purpose and I suspect that furnace cement may prove to be a great cost-saving for them. [I have another experiment in progress on that dimension, as well!] I will contemplate mixing a teaspoon of titanium dioxide to some furnace cement and coating the top and bottom of the billet, and using pure furnace cement on the sides. Titanium dioxide, I predict, would be the archenemy of a weld – it’s basically a high temperature-capable version of that oxide layer, anything with titanium dioxide on it ought not to weld to anything, so I want to keep it at arms length from my work area.

All in all, I would rate this test a “near miss.” If this technique can be made to work, it’s about 10 times easier than the current prevailing method for making San Mai.

Does anyone want a nice san mai billet? It would make a good cooking knife. There’s only one little problem with it…

I still haven’t managed to actually make anything except experimental chunks of stuff which are mostly winding up in a “stuff” box. That frustrates me but I understand it’s how these things go. I could be just grinding up a storm if I chose to use someone else’s metal, or not to forge-weld my stuff. I’m reaching for a much more difficult set of techniques and it’s a struggle – but I will prevail!

The other technique I am experimenting with is called “canister damascus” – the technique involves assembling a bunch of bars and/or powdered metal in a steel tube with the ends welded shut to keep the air out, except for one small hole; the whole thing is then soaked in kerosene to replace the oxygen, and brought to welding temperature, then smashed. Canister damascus requires welding the canister airtight. I have a pair of experimental canisters I am slowly working on, which are tack-welded instead of airtight-welded, and I have used a long paintbrush to air-seal them from the inside using furnace cement. Again, if furnace cement works, it will be much faster, easier and quicker to clean up. Another problem with canister damascus is removing the canister once the whole mass is welded. If the interior of the canister is painted with furnace cement and a bit of titanium dioxide, I expect the contents to not weld to the canister at all – another huge time-saving, and a cost-saving on all the White-Out.

If either of these techniques (“simple san mai” or “simple canister damascus”) work, I will save my fellow blacksmiths a few thousand hours of their lives every year. So the failure and investment of my time is worth it. Besides, if it works, it’ll save me hours, too!

It is unsettling how a couple hammer-blows will bend 5/8″ thick steel when it’s yellow-hot. If this technique works, I’m going to probably make a better press out of something hellaciously tough like S7 tool steel, and I’ll make sure I flatten it back out on the anvil each time I use it.

Brains are funny things: I use ether for my wet plate photography, and titanium dioxide for soap-making and casting. So, when I saw someone using White-Out for forging, I immediately figured out what White-Out must be made of: ether, titanium dioxide, and a tiny bit of acrylic glue. I could, literally, go to my supply cabinet and whomp up about a half a gallon of the stuff – except my ether supply is precious to me. That stuff is hard to get nowadays. Thanks, methamphetamine addicts!

I Welcome Complete Falsehood » « Accuracy Is Not The Objective