The last run of mokume was nearly a disaster. This time, it was nearly a cakewalk. For me, that’s the fun of doing crafts: figuring them out and getting better and understanding them more. And not hurting myself.

I don’t have a TV and since I have metered bandwith I don’t watch stuff like Forged in Fire but from some comments on one of the knife-makers’ forums apparently the most recent episode included someone burning their forge down while quenching a blade in oil. Yes, that’s why you don’t use flammable oil. One of my friends uses bacon grease from a local diner; maybe he’ll switch to using a better-designed quench oil. I use a stuff called “matrix 50” which, from the smell, is a mix of some light machine oil and some alcohol and glycol. One thing it does is smell. One thing it does not do is burst into flame. I also have an extinguisher standing by: you’re not dealing with a large thermal mass of welding-hot metal, so a fire extinguisher would actually help.

My last attempt at Mokume was so-so. [stderr] It melted and splashed on the floor. This time I did it differently: 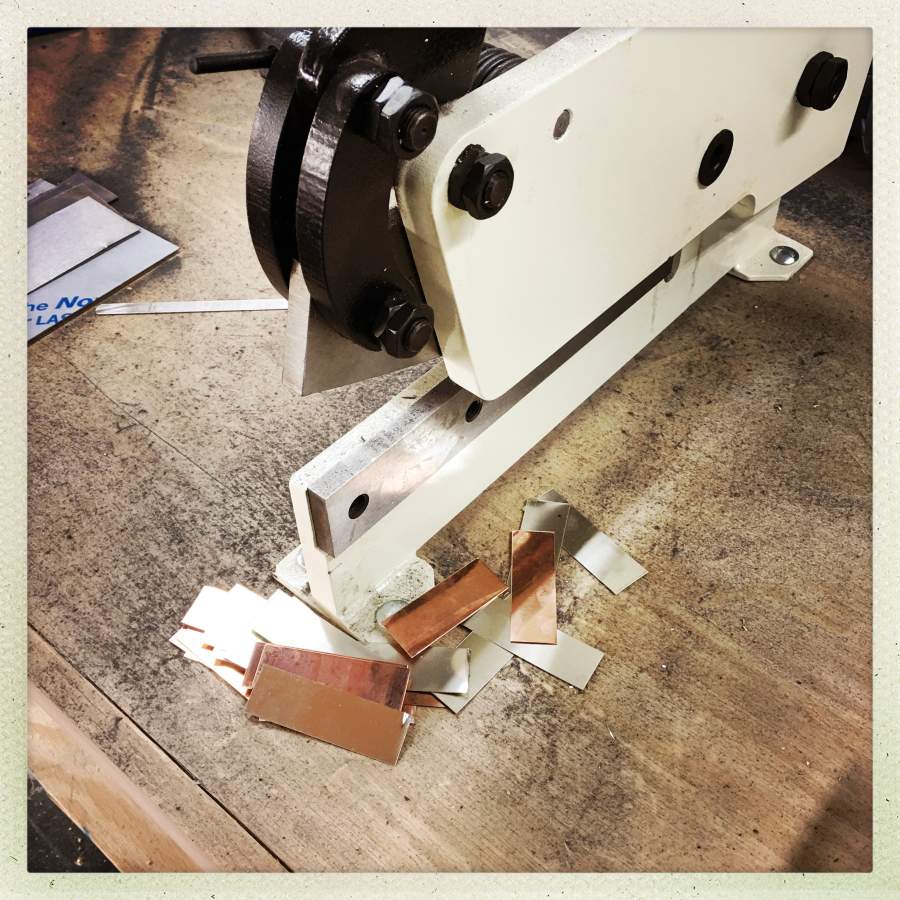 Chomped up the copper and nickel on the chomping device. 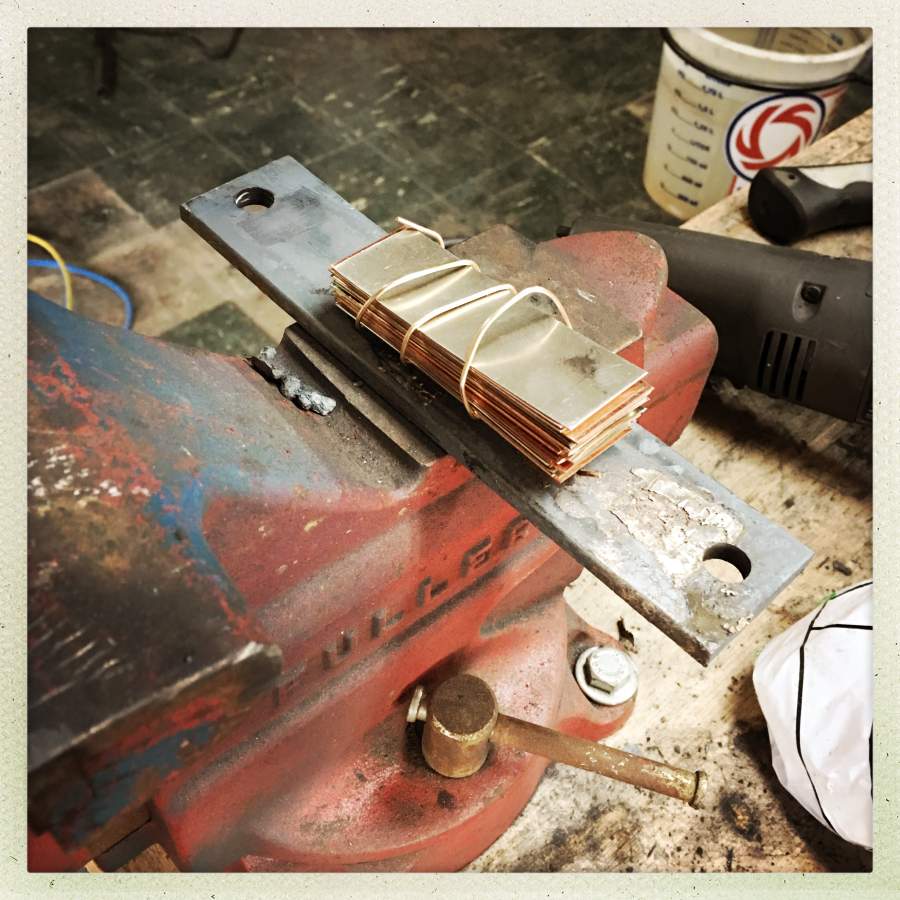 Wrapped it with bronze wire that would serve as a melt-sensor: when the bronze wire disappears it’s time to watch closely. 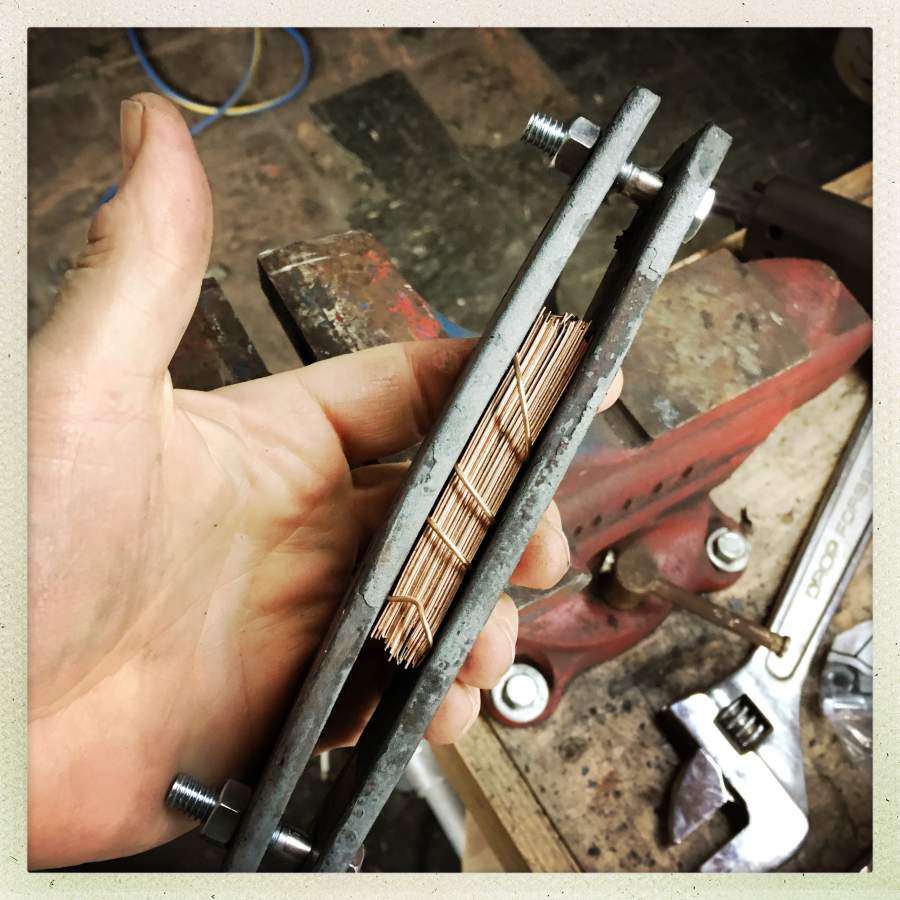 Tighten the bolts until they scream. Some mokume-makers insist you should use a press at this stage but I think they don’t understand how much pressure you can apply with plain old bolts. In this case I don’t care what happens to the bolts because they are going to get cut off with an angle grinder – so I just clamped them and went after them with a big socket wrench. 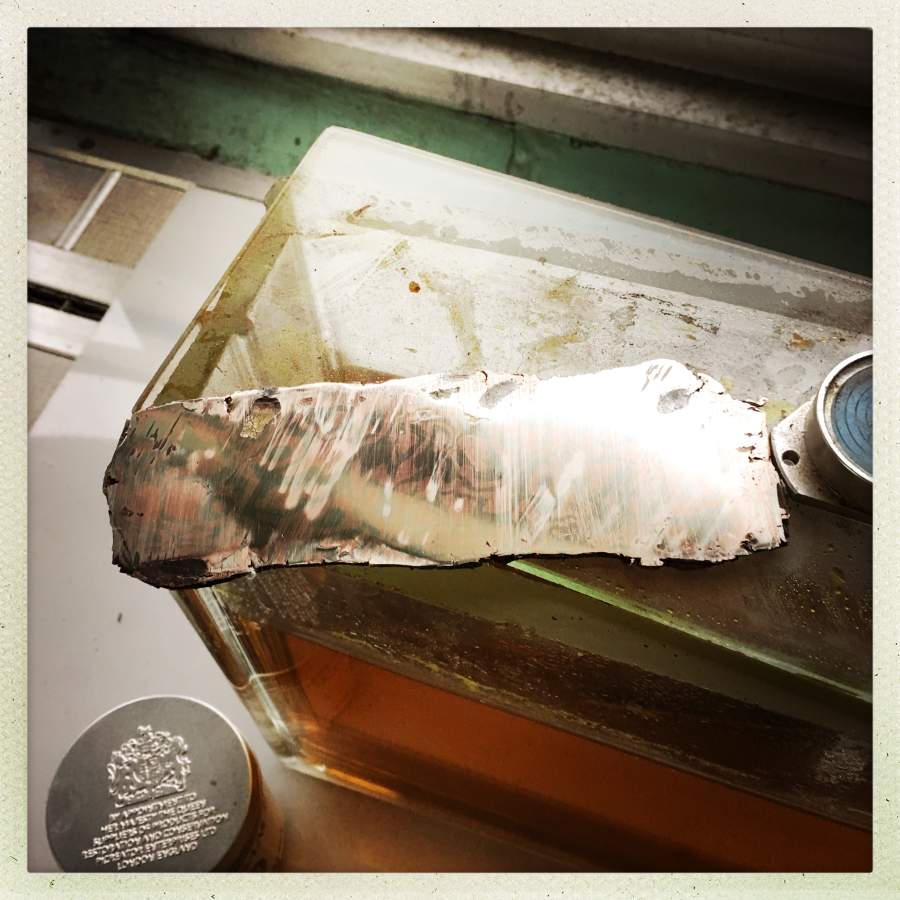 I am eventually going to set up a camera on a tripod so I don’t have these big lapses. When you have big gloves on, you can’t work an iPhone. I need to bring my laptop and my DSLR along and do some time-lapses.

“There was a great deal of heating and hammering.”

I also took it over to the milling machine (!) and made a bunch of dimples in the surface with a ball end mill. That was when I discovered how crunchy copper/nickle can be – it did a fine job but the bar wanted to disintegrate. So I brought it back up to welding temperature and very gently tapped it to set it. A bit of copper drooled out the side. That made me think I should make a polished stainless anvil-cover for doing stuff like this – the surface of my anvil usually has fine bits of steel scale dust on it. 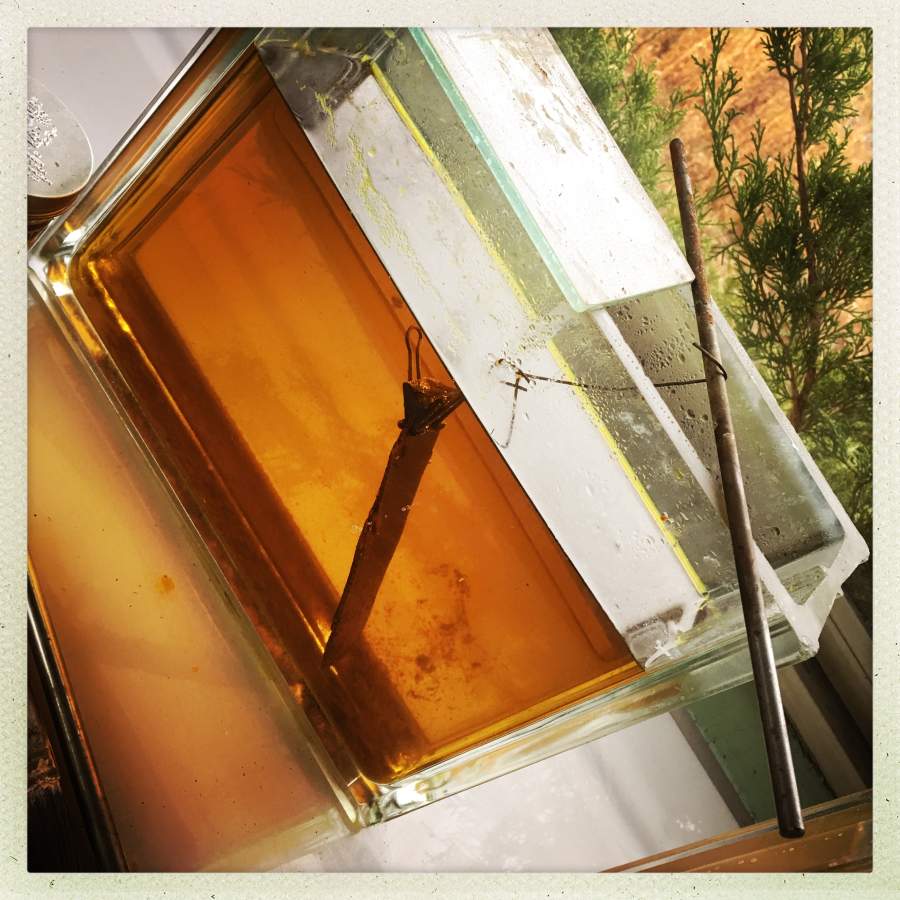 I keep thinking of making a damascus cross so I can shoot a photo that looks like Piss Christ except I can call it Ferrous Chloride Christ. And now you see why my career in the arts has not been stellar. 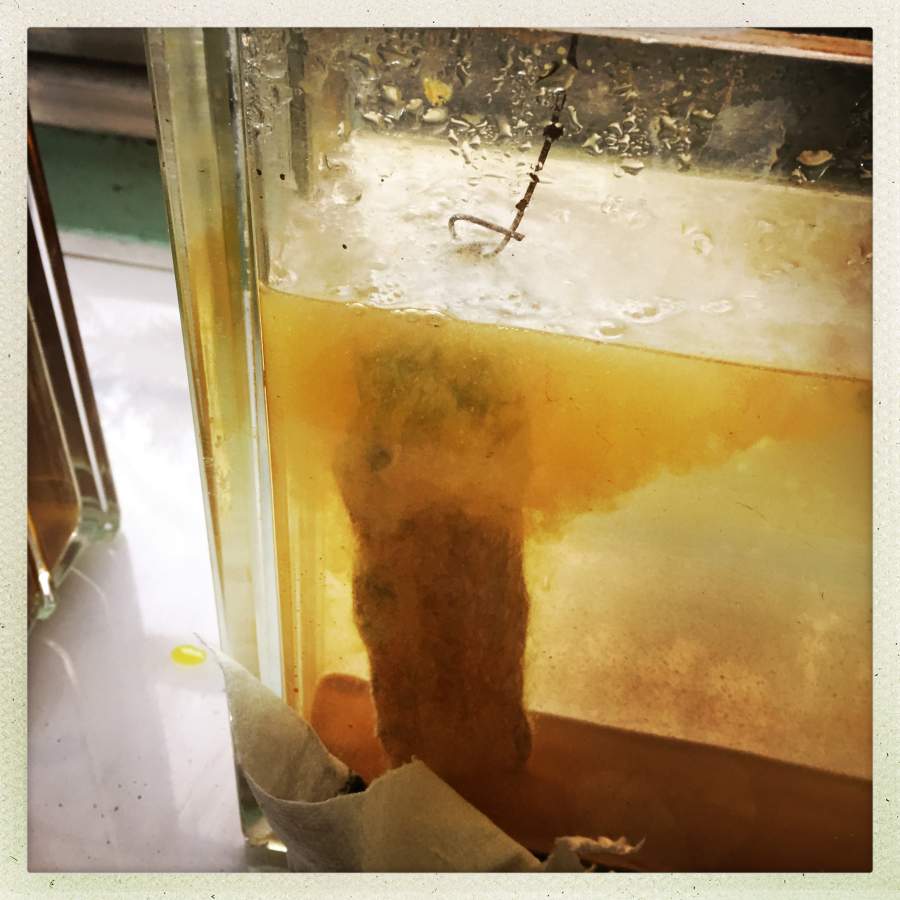 Water and baking soda to neutralize it. 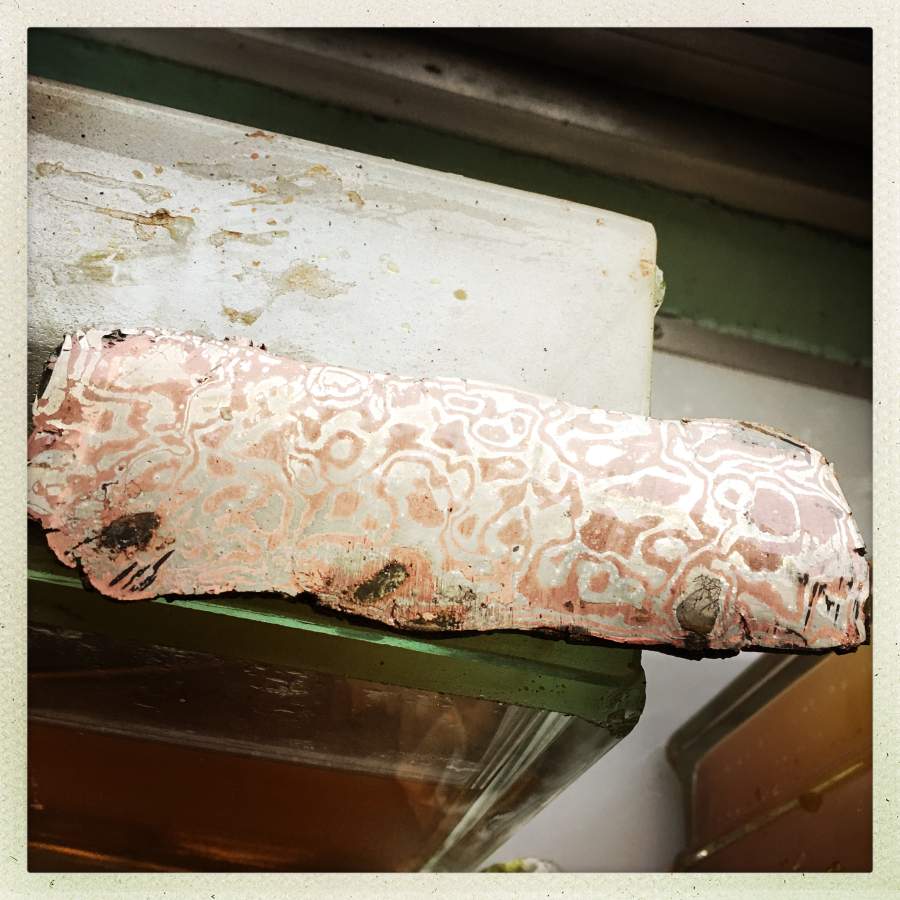 A little Brasso and it’ll look great. The bar is about 1/8″ thick – a bit small for a guard, but plausible for a dagger or a piece of jewelry. As the size of the work-piece goes up, the cost of the goods skyrockets and the potential for failure goes up, too. There are people who make entire sword-guards out of mokume: there you’re looking at a 5/8″ thick piece, 4 or 5″ around. Ancient Japanese royalty had mokume made of gold and silver, naturally. Because they didn’t have to polish it.

It Sounds Like They Had to Get Some, Too » « I Suppose “At Least We Weren’t Shooting People” Is An Excuse