The Baltimore Police have a huge problem. Not only has it turned out that the street cops are thugs that murder citizens, lie when giving testimony, and retaliate against whistleblowers – they’ve got a large contingent that appear to pad their books very heavily.

The scam is a straight-up shakedown, like you’d see in victorian New York (documented in Scorsese’s wrenching Gangs of New York) – the cops charge local events for overtime event security, and they claim way more overtime than they put in. The problem for the event is that if you want to hold an event you are required to have security, which means there are cops or off-duty cops, and they charge overtime. It doesn’t take a genius to see that is a situation ripe for corruption: basically the cops are allowed to print money.

If you want a full expose of the horribleness that is police “overtime culture” you can read this [bb] – it’s depressing. It reminds me a lot of when I was a kid and read Serpico, there was a description of “cooping out” – the police would find a safe place where they could set up a little nest and work on their morale by napping, drinking, doing drugs, or having sex extorted from prostitutes or anyone else they could “collar.” When Serpico tried to tell his bosses about this, he was set up by his fellow cops, and basically pushed into the path of a bullet. In Baltimore, right now, the same sort of thing is going on. A whistle-blower (the article, inappropriately refers to him as “Rat Cop”) is being hounded by his former mates – for reporting their thuggish brutality [huff] – note how this sort of thing only happens after Freddie Gray is safely dead and in the ground, and the system has decided it’s not worth pursuing a case against Freddie’s killers. I will note that Joe Crystal joined the force in 2011 and Freddie Gray was killed in 2015 – so Crystal was at that time a contributing member of the police system. 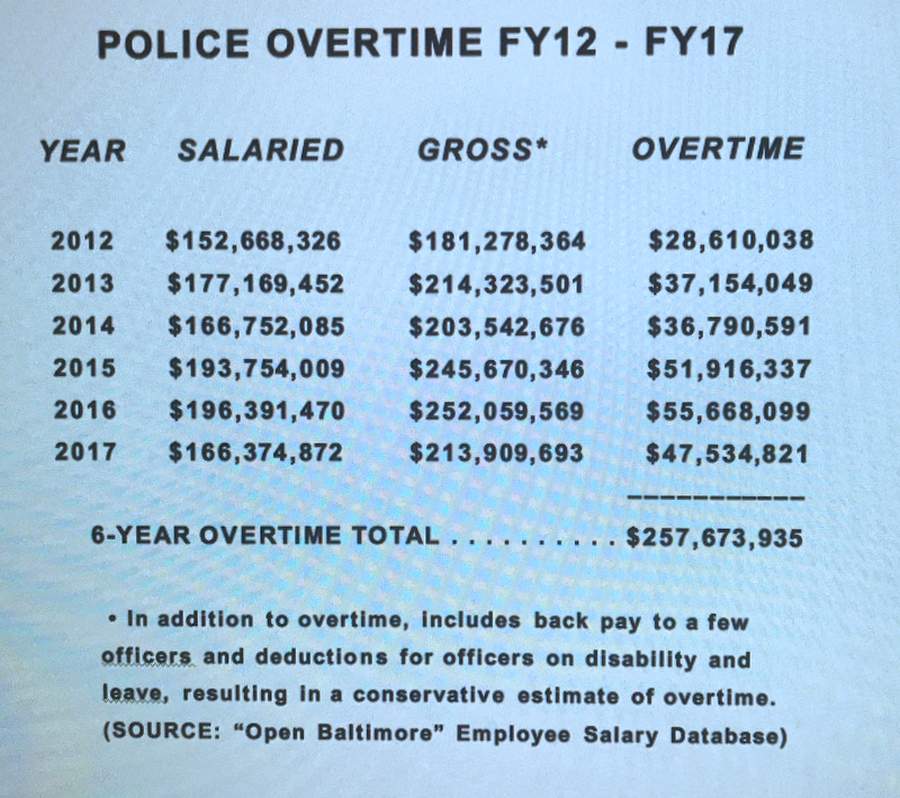 When they weren’t murdering citizens, they were padding their time cards. To the tune of millions of dollars. It’s hard being a cop, we are told – it’s heroic and dangerous. You might hurt your thumbs playing playstation in your $200,000 suburban house: [bb]

$700,000 in overtime is pretty impressive. That’s Donald Trump-level scamming. But, it gets worse: [wp]

Jennifer Simms, 38, who is expected to report to jail to start her sentence Friday, entered an Alford plea to one count of theft over $25,000. The Alford plea means Simms does not admit guilt but acknowledges prosecutors had enough evidence to win a conviction.

The guilty plea stems from work Simms claimed she did for the city of College Park between 2012 and 2014.

Simms filled out timecards reporting she was working during times investigators later found she was actually at home, on cruises or trips away, said John Erzen, a spokesman for the Prince George’s County State’s Attorney’s Office.

Simms was also charged with theft in a similar scheme connected to her work as a crime analyst with the Prince George’s County Police Department, netting about $140,000 in unearned pay, prosecutors alleged.

Judge C. Philip Nichols Jr. initially found her guilty in a six-week trial but reversed the conviction after her attorney filed a motion for reconsideration.

Is a motion for reconsideration like a “mulligan” or a “do over”?

Here’s how it works: The City of College Park pays the cops for overtime, so it’s on the city’s books. I.e.: the police force doesn’t care – scam away, cops. There are stories (that I believe) that it’s a regular thing that officers buy their supervisors’ silence with an “envelope” … of cash. Usually dispensed at Christmas.

These payouts are for event security. So, imagine: not only did the cop miss the parade they were supposedly doing “security” at – they charged massive fees for having what would have been a pretty low-key day walking around, telling the weed smokers to go somewhere else, and maybe beating up a hippie or something.

Part of the problem is that cops have the wrong metrics; a perverse incentive: “get arrests.”

The phenomenon of high-earning but not-highly-productive officers is well known in police circles, according to a veteran officer who requested anonymity because department policy forbids police from talking to the press.

“We call them house cats. They stay inside the downtown bureaucracy and they’re not making a lot of arrests,” he said.

Frank Serpico says [politico] “The police are still out of control” – what do you mean? They are still in control.

How does one measure police effectiveness?
Plan A: I would start with looking at number of incidents responded to by category, then I would look for incidents reported by category; that would let me see if the cops are responding to what 911 is getting on the input. Cops could also report incidents and would be expected to have body cams on at all times, so incident reports would be randomly spot-checked for accuracy (if the cop says “got old lady’s cat from tree at 11:05am there should be video) – that would help produce a metric for cop-cam accuracy as well as reporting accuracy. Then, we would randomly contact the citizens involved and ask them whether they were satisfied by the response, build a metric out of that, and publish it monthly in a newspaper. Every police department needs an Office of the Ombudsman, as well.
Plan B: Fire all the cops and start over.
Plan C: Outsource policing to Amazon.com or SpaceX. For all intents and purposes, policing is outsourced right now anyway.

Edit: I think the “motion to reconsider” is the tip of an iceberg of officially reducing police corruption. If they report police corruption as “we had only 2 officers convicted of corruption” that’s what’s going on – they’re gaming the conviction-rate. What you want to look at is the complaints-to-offenses-to-convictions ratios.

More Mokume » « Of Course They Will