Last Wednesday, knowing the milling machine move was coming up, I assembled a load of stuff-moving gear in the back of my truck: engine crane, crank cargo straps, tow straps, chains, variety of wrenches, 2×4 pieces, pipe pieces, and a first aid kit.

I usually spend my Thursdays and Fridays in Pittsburgh, and this weekend we had tickets for the Lewis Black show in Greensburg on Sunday night. So it was important to have everything ready so that I could hop up perkily at 4:30am on Monday, drive home, switch cars, pick up my semi-volunteer Worthy Assistant, Mark A., and head towards Williamsport. The Ryder rental truck company there had called earlier to confirm my reservation and inform me that they didn’t have the truck I had arranged for – instead they would upgrade me (free!) to the extra great gas-guzzler model. As long as it had a hydraulic lift gate, I was going to be happy.

Getting the truck went without a hitch and we transferred our implements of destruction, then headed up to the seller’s shop to load up. After a bit of jockeying to line up the truck’s lift gate, we put a tow strap around the ram of the machine, turned the head downward, removed any breakable thingies, and set the engine lift for 3 tons, and started to lift. Up until that point everything had gone swimmingly because basically we hadn’t done anything yet, except drink coffee. The milling machine started to come up off the ground most gratifyingly and I decided to give it an encouraging nudge with a pry-bar. That was when one of the casters on the engine hoist blew off the leg, flew across the room and the machine dropped about 2″ onto the floor.

I said something silly like, “did you know that a feather would fall at exactly the same speed except for air resistance?”

We stood around clutching our temples for about 15 minutes and decided that Plan B was to use black iron pipe as rollers, after tipping the machine up a bit with a pry-bar. It was surprisingly easy and the machine could be turned or re-oriented by just changing the angle of the rollers. The aliens that taught the ancient Egyptians how to make pyramids really did them a favor when they gave them the roller technique.

One other thing I liked about the roller technique was that it addressed a concern: what if the thing starts to roll? I had a spirit level and made sure the truck was not inclined before we tried the engine hoist, because I had this nightmare image of the whole mass charging forward and slamming into the front of the cargo compartment, then ending up in the passenger’s seat after blasting through the thinnish aluminum of the truck body. The roller technique only puts you at risk of moving halfway the length of the machine’s base. Built-in brakes are good! Another tool that turned out to be useful was the pair of 12″x24″ 1/2″ thick steel plates that I brought along in case we needed ramps. The guy who sold me the mill threw in a 36″x24″ 1/2″ thick steel plate that he had been using as a base, so we had plenty of extremely heavy and tough roller-ramps. 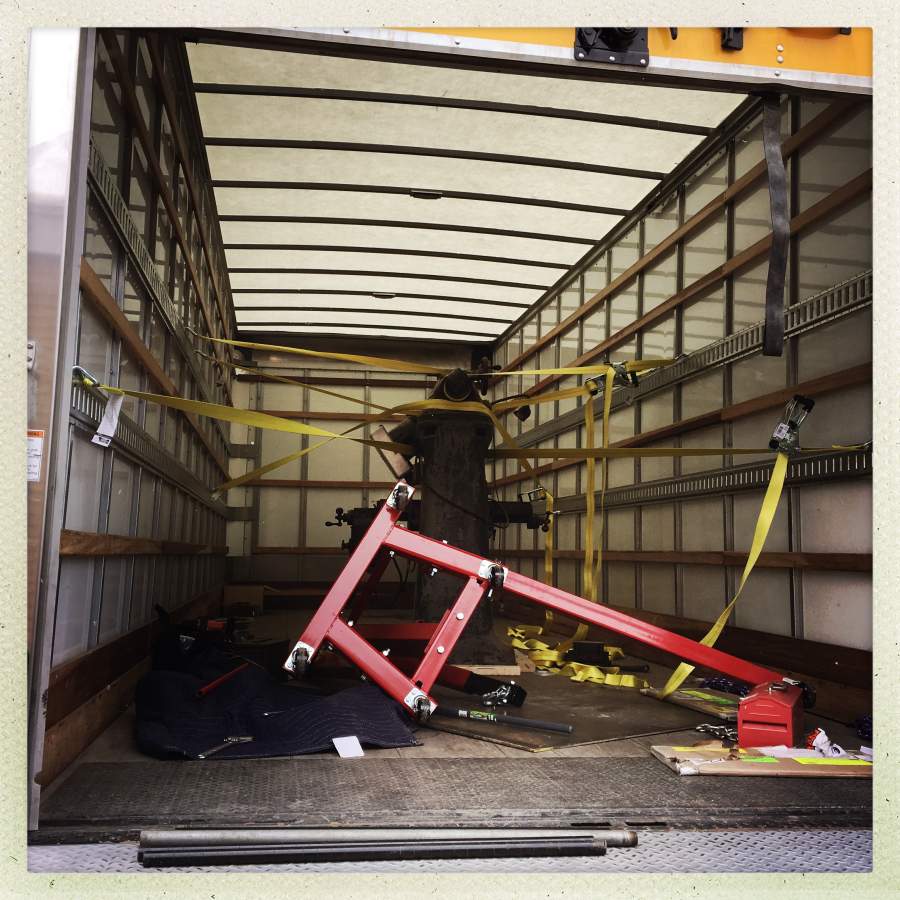 I hooked a come-along (hand winch) to the top of the lift-gate and cranked the whole thing right up, as easy as you please. Then, we lifted the gate and rolled the machine into the center of the truck and strapped it in. There are some 2x4s screwed into the floor to keep the base from skidding around if it was so inclined.

After that it was an hour and 45 minute drive to my shop. Unloading was easier – just unhook everything and roller it back onto the lift-gate by tugging gently on it with a chain attached to the bucket of Mark’s bobcat. The bobcat was definitely not able to hoist the milling machine, but it was a great anchor-point and pusher. 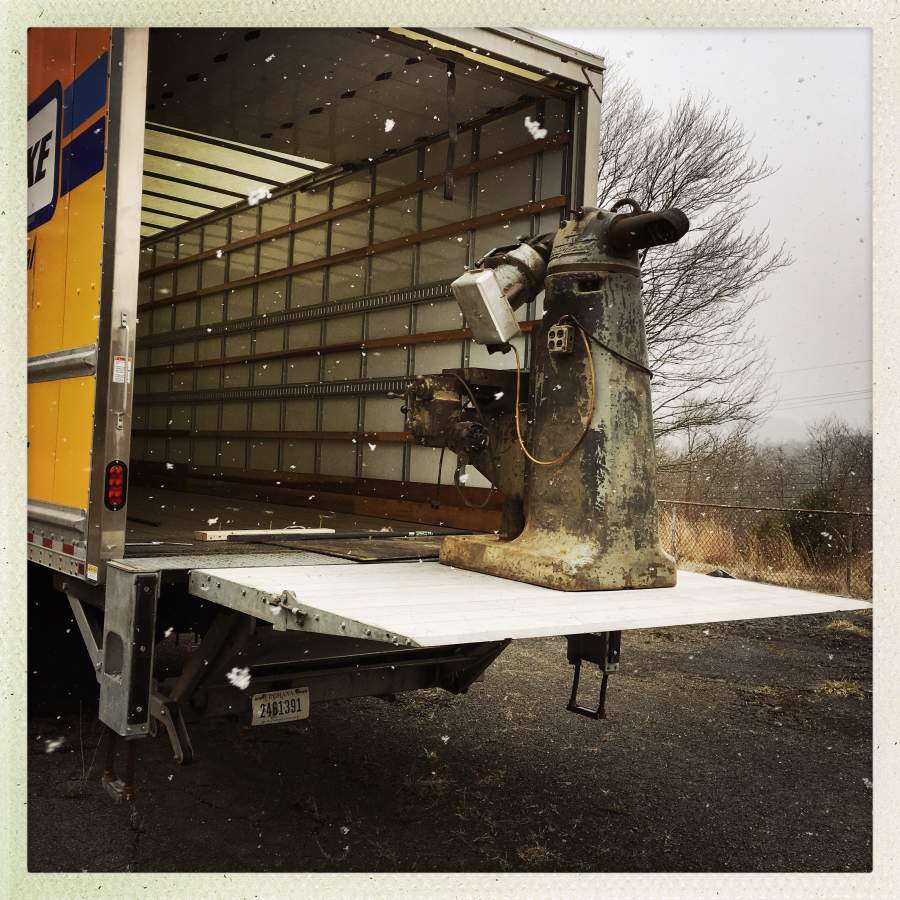 The side-doors of my building have a central post between them, and it did not want to come out. We were getting tired and it was about 4:00pm by then, so I just used a cutoff wheel on an angle grinder to persuade the old screws to leave. In a couple weeks, when things calm down, I’ll clean up my cuts and weld a new piece onto the top.

It was shortly after we got the machine in the side door that I thought to run down and measure the door to the shop. It’s 35 1/2″ and the machine was a whopping 40″. So, we called it a night. I realized that I was going to have to disassemble the table, which is no small task. This afternoon, I got started by removing the ancient power-feed motor assembly, and the control wheels. It’s 33″ wide, now! 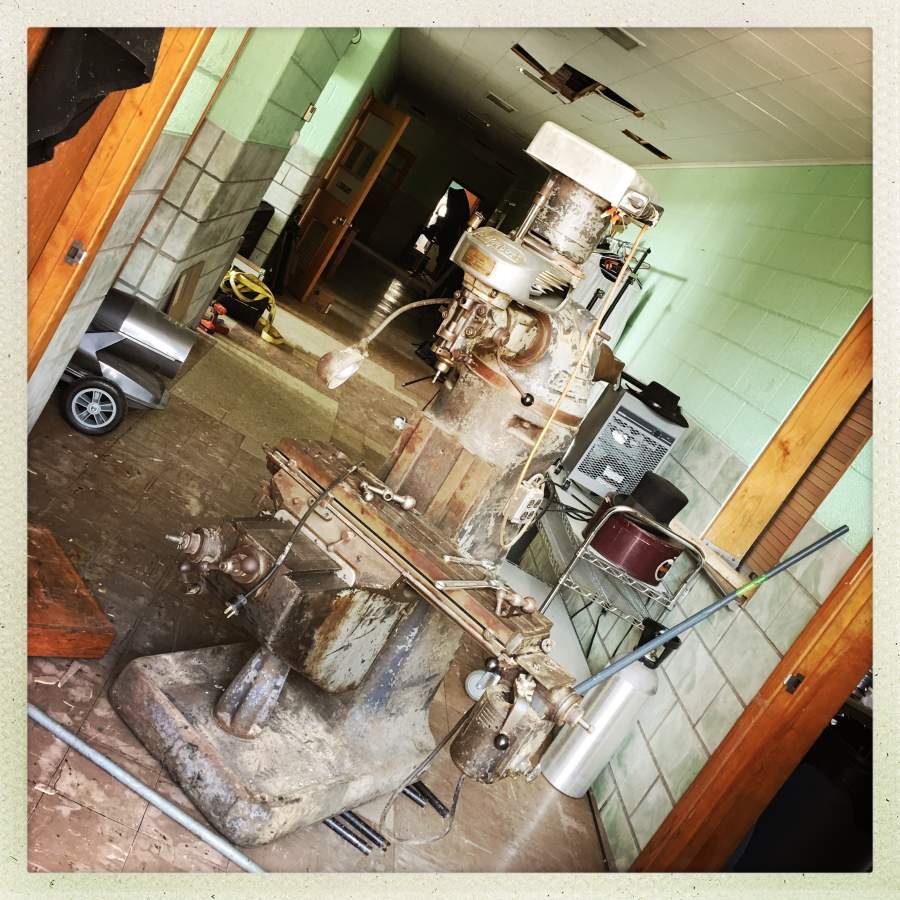 The ancient power-feed motor and gearbox are the thing on the right end of the table. They came off pretty easily, and only weigh about 50lbs. I don’t believe I need to disassemble anything further to move the machine down the hallway to its final resting-place.

But, meanwhile, other forces were in motion. The trucking company had “misplaced” the 1/8″ 4’x8′ steel sheet I had ordered to make a sandbox for the forge. This morning, bright and early, the disgustingly cheerful truck driver called me, “hey, I am 10 minutes away, are you there?” Arrgh, no, I was not. But I was there in 15 minutes and the driver (who had no lift-gate) and I pulled the palletized sheet off the back of the truck. By this time, a mere 230lb box was a laughing matter: I hooked a chain through the pallet and my trailer hitch and just dragged the whole thing 100yd up the driveway and then negotiated it past the milling machine that some idiot left blocking the hallway. 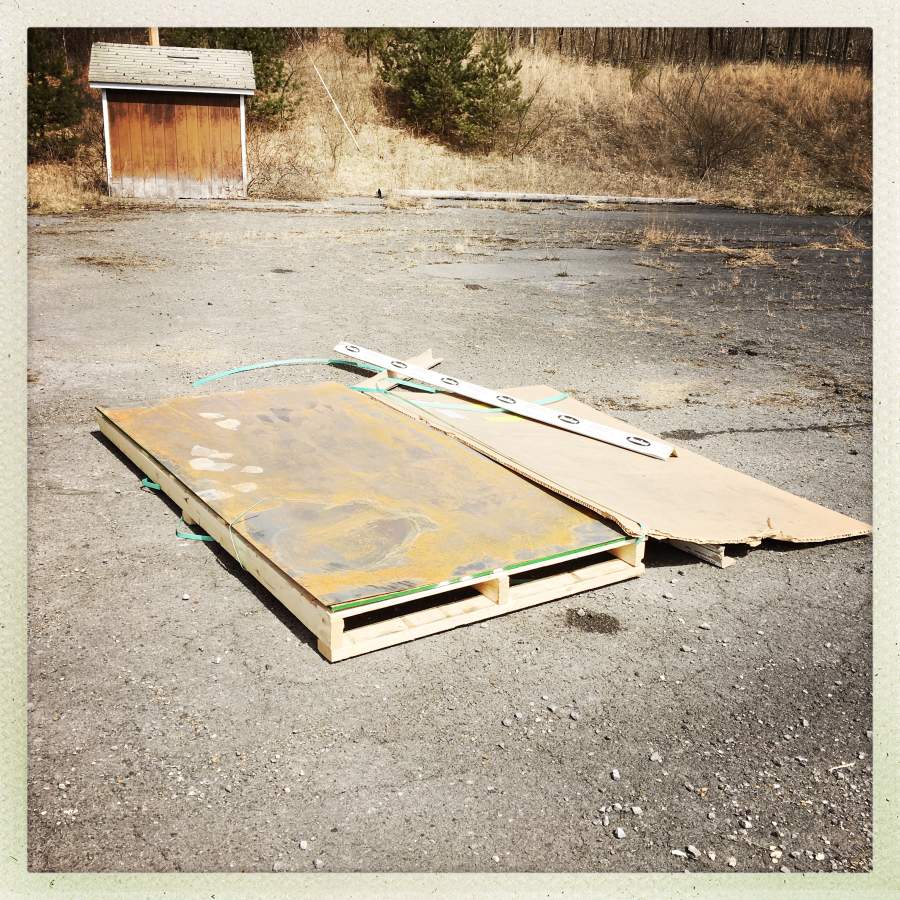 The worst part about the sandbox project is that I have to move everything in order to figure out where it will go. That’s not too bad, because it gives me an opportunity to re-assess the position of my log/anvil and press. “Opportunity to re-assess” is corporate-speak for “groan and do it all over.” Then I hauled the steel sheet up onto some jack-stands and demonstrated once again that I am The Worst Welder in The World. 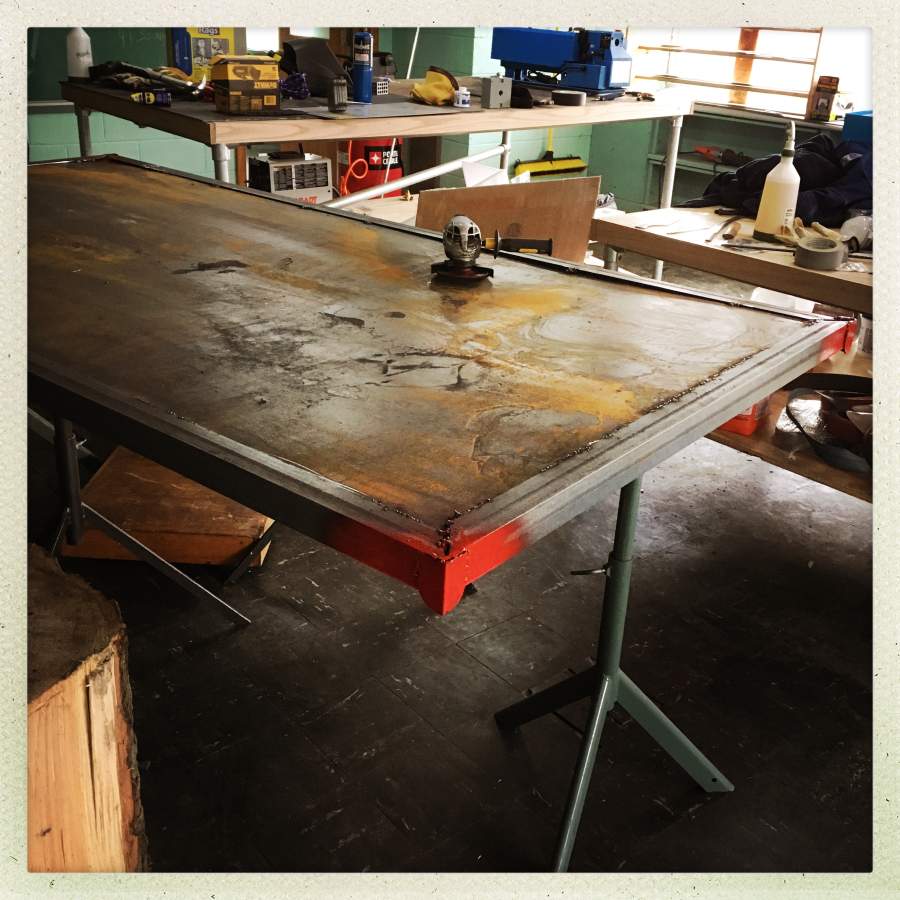 Those spiky things are unfortunate but necessary because the lengths of the bottom-piece was a bit larger than I ordered, so the side-pieces were short. I did not want to cut off the sheet, lengthwise, so I just engaged in some ugly fudging. My plan is to put some cut tennis-balls on the end of those corner-pieces so nobody steps on one and cuts their leg or anything. The bottom is just tack-welded to (sort of) keep it together.

Tomorrow, it’s going to get wafted over into position and I’m going to return the engine-hoist and get a couple big bags of sand.

“It just snapped off sideways and kept going.” I took the caster to Tractor Supply (Harbor Freight) today and they were duly shocked, understood right away what had happened, and agreed that we were all very happy it had not happened when the machine was up on the lift-gate. They offered me a replacement hoist, but I opted for a refund. I have discovered a great love of Egyptian-style rollers for moving heavy stuff. But mostly, I plan to avoid moving heavy stuff.

Roller technique: When I visited Teotihuacan, someone pointed out to me that the rocks the pyramids are made of are fairly small – nothing larger than can be hand-carried. Apparently the ancient aliens only explained the roller trick to the Egyptians, because the pre-Aztecs had to do it the harder way.

Roller-ramps: I bet the Egyptians had some kind of roller-ramp that they used to make a good base for the rollers. Now, once you’ve got that picture firmly in your mind you can see that the Egyptians had invented the tracked vehicle/bulldozer. The beauty of bulldozer treads is that they lay down the roadway that they are going to go over, then automatically pick it up again as they go past.

The roller technique depends on having a solid, packed, and mostly smooth surface to move over. You can get over door-sills and stuff pretty easily, by just staging the rollers on the other side. We were repeatedly amazed by how well it worked.

Somehow during the course of my life I have inherited a pretty impressive collection of angle grinders. 4, to be exact. That turns out to be really convenient since I can keep a variety of grinding or cutoff wheels on them, and not have to swap wheels. Swapping wheels is an opportunity to screw up and have something come apart, so I’m happy to be able to have the grinders “ready to grab.”

A 2’x3′ 1/2″ steel plate weighs about 180lbs. The smaller 1’x2′ plates were about 60lbs. Moving them, and the engine hoist, was harder work than moving the milling machine.