We humans can move very heavy things, using just our brains and simple tools. Or hydraulics. For everything else, there are hydraulics.

One of the best ways of keeping machines from vibrating is to not worry overmuch about what they weigh. Make everything of steel, bolt it together with huge bolts, and let it be so heavy that it sinks into the concrete floor, slightly.

The guy I bought the grinder from loaded it into the back of my Chevy Tahoe using a forklift. He runs a business building high-performance tractors for tractor pulls, and had obtained the it for some unfulfilled purpose-or-other. I saw it on Craigslist and snapped it up. When the weight of the machine hit the back of the truck, the entire truck sighed and sank a couple of inches. 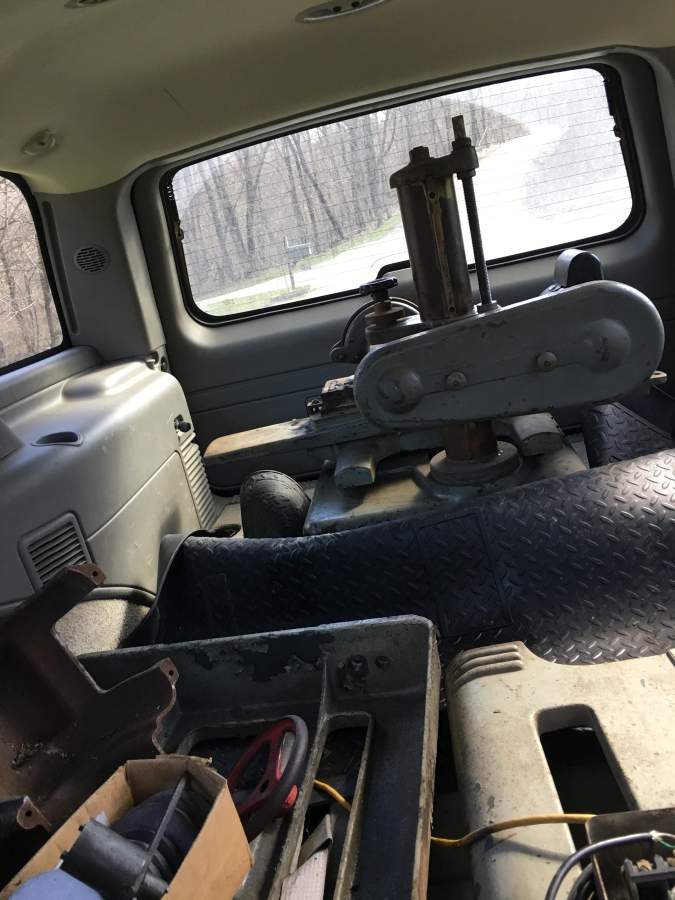 Steel weighs roughly 500lbs/cu ft. Which is 226kg per 30cm/cu. In those terms, the thing is positively “light and fluffy” since that would mean there is less than a cubic foot of steel, total, comprising it.

My patient neighbor with the bobcat (who helped me unload the forging press) [stderr] unloaded it onto my fine art shop dolly, and we pushed it down the hallway into the shop; he had to go do some Easter Sunday stuff, so I ended up staring at the thing for a while. 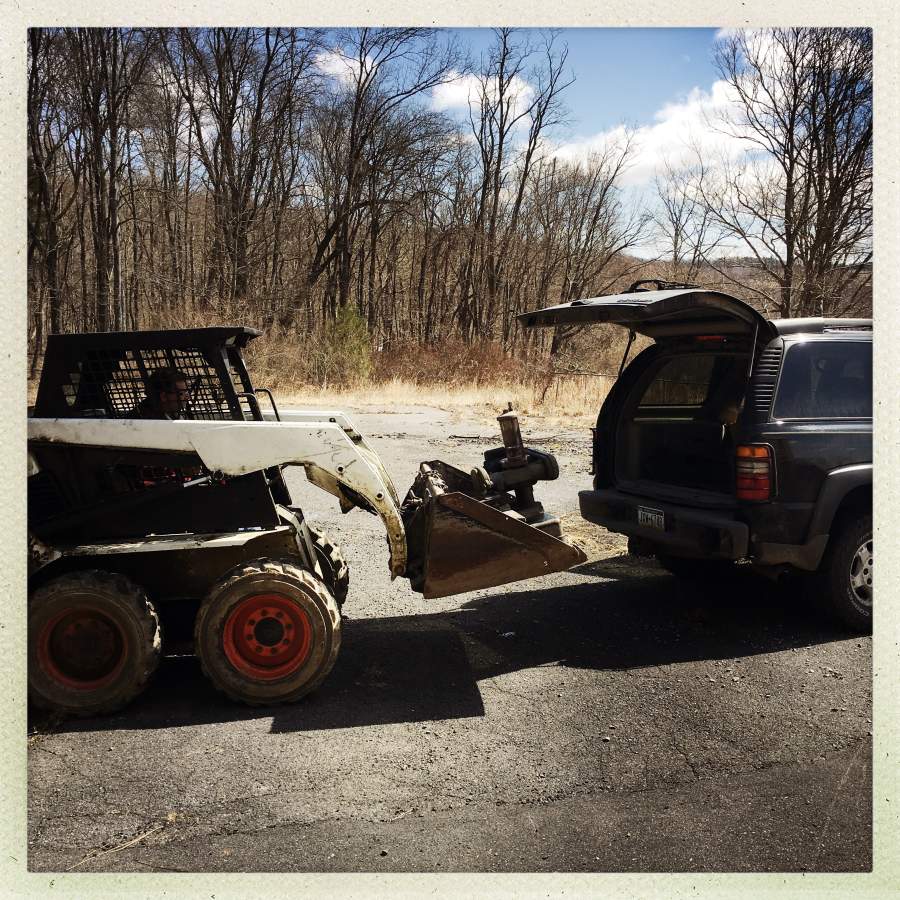 I sometimes describe people as a “FWATS” or a “FWAPT” (friend with a table ${table saw, pickup truck}) – but I convince myself it’s doing Mark a favor to start his bobcat every so often and make sure the tires are inflated and the hydraulics are working. 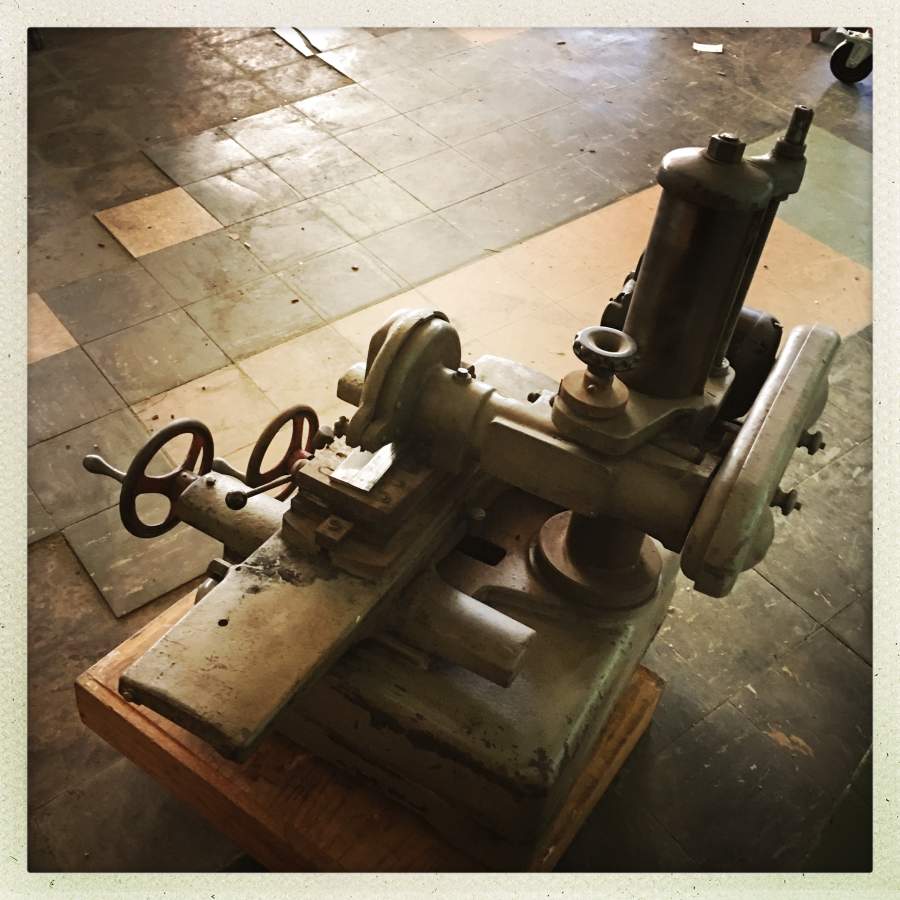 The grinder head moves up and down with the motor and drive assembly, and the table (with a magnetic chuck) goes back and forth with the work-piece, bringing it in contact wit the grinding wheel. Then, there are sparks. There isn’t much vibration because the machine’s legs are cast iron and the machine is heavy. I regret not photographing the leg-bolts (but I am never going to take them out; I will die with them in) – they are 1″/25mm machine bolts, 4 of them. 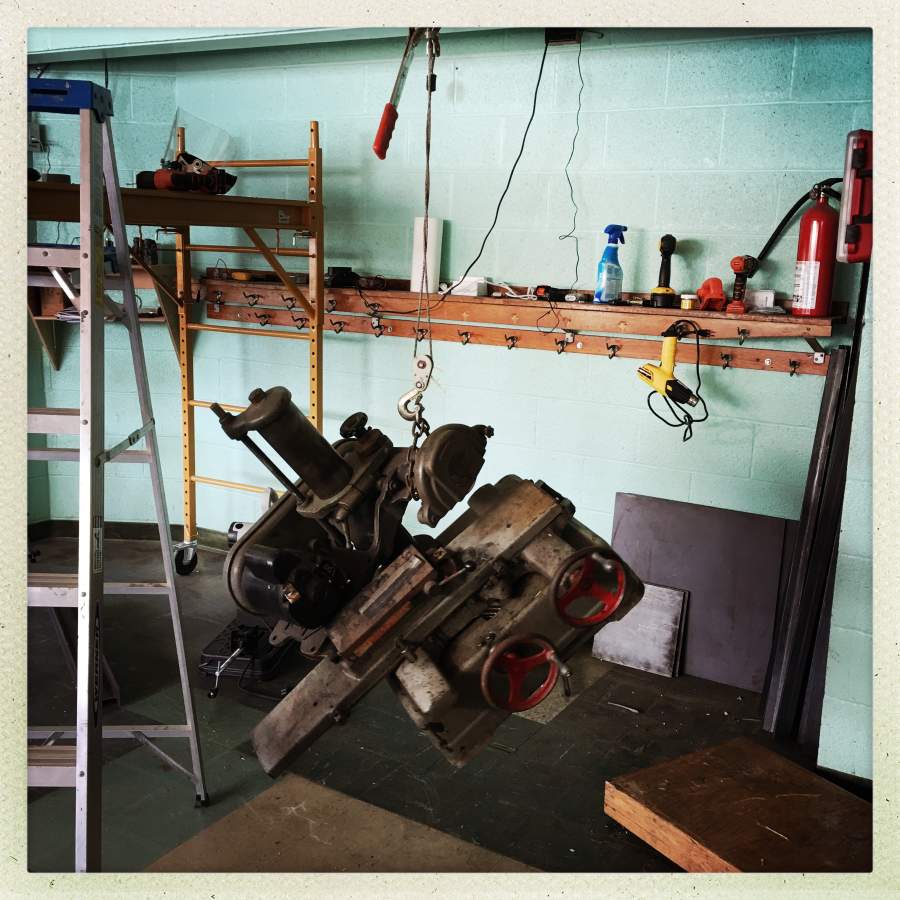 I actually wanted it to tilt when I raised it; that way I could get the leg on without having to haul it all the way up. As it worked out, I lifted it pretty high. The entire time I was near the machine, I was ready to maneuver rapidly backward. 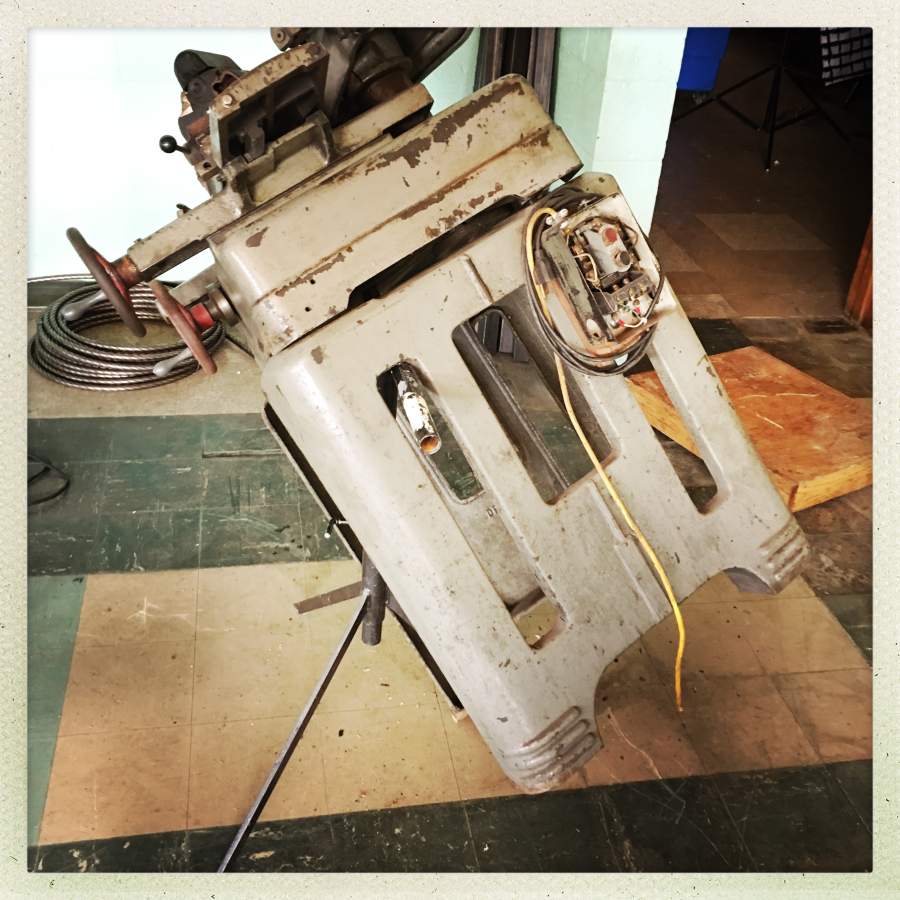 I put the jackstand under the leg to raise it so I didn’t have to use one arm to hold the 100lb/45kg leg while I fitted the bolt. I also didn’t want any part of my body under the machine until it had its legs on.

Look at the power switch! When I got the machine, I borrowed some wire cutters and snipped the power wire (yellow) so that it would not work at all until I had a chance to re-wire it.

Do you see the razor blade hidden in the apple? I did!

Here’s the problem with the switch: it is positioned so that while you’re using it, your face is right where the work-piece is going to fly if you forgot to engage the magnetic chuck and the grinder wheel is in contact. Zwipp! Ow! I cut the wire and I’m going to mount a nice new emergency-paddle style switch on the front leg. And maybe a switch that is not full of dust and junk (the old one, open, is in the path of the cloud of ground steel coming off the wheel) 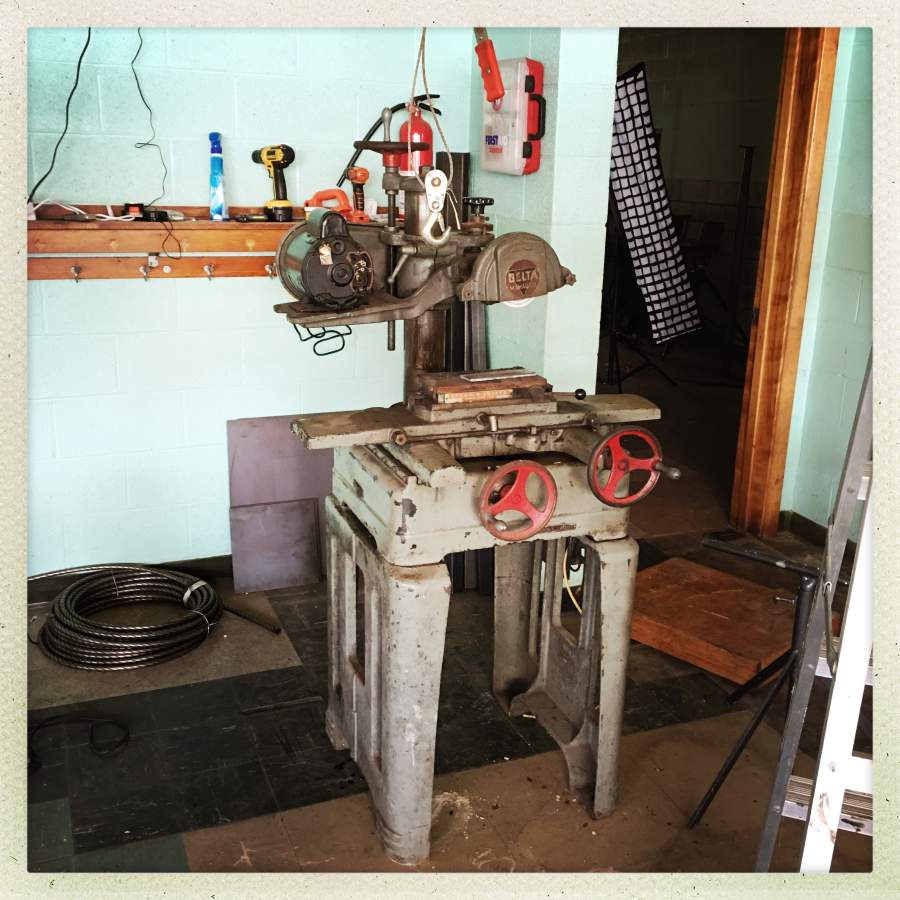 I spent about 2 hours with a paintbrush and some Gum Out engine cleaner, and – other than chipped paint – it looks like new, now. All the rust came right off with Gum Out and steel wool and a roll of paper towels.

This was all sort of a mental dry run for the real equipment move, which comes next monday. Literally, while I was driving down to do the transaction on the grinder, someone listed a Bridgeport knee mill on craigslist – 100 miles north of my house, while I was 100 miles south of my house, near Pittsburgh. The price on the mill was so embarrassingly low I asked the seller, “do you mean $1,100 or $11,000?” The seller said he’d sell the machine to the first person who put the money in his hand so I decided that I was going to piss my girlfriend off by screwing up our weekend, and got up at 5am, drove 220 miles to close the deal on the mill, then drove back to Pittsburgh so we could spend the rest of the day and evening together. Screwing up a dinner and computer gaming date is serious business, and I can’t think of the last time I did anything like that, deliberately. But that’s a ludicrous price for a working Bridgeport mill. It even came with what is easily $500 worth of collets and mills.

I’ll post the tale of that adventure if everyone (and the mill) survives. Since I know some of you are expecting catastrophe: so am I. I’ve been researching how to take the table off a Bridgeport (it’ll need to be off to fit it in the door, and it’s less likely to get damaged) and watching a lot of “how to” on field disassembly of the machines. I’ve gotten (“some assembly required!”) an engine hoist and a rental truck with a lift-gate, pry bars, truckers’ ratchet-straps, moving blankets, t-nuts and eye-bolts for the table. This is going to be a memorable project, hopefully in a good way. 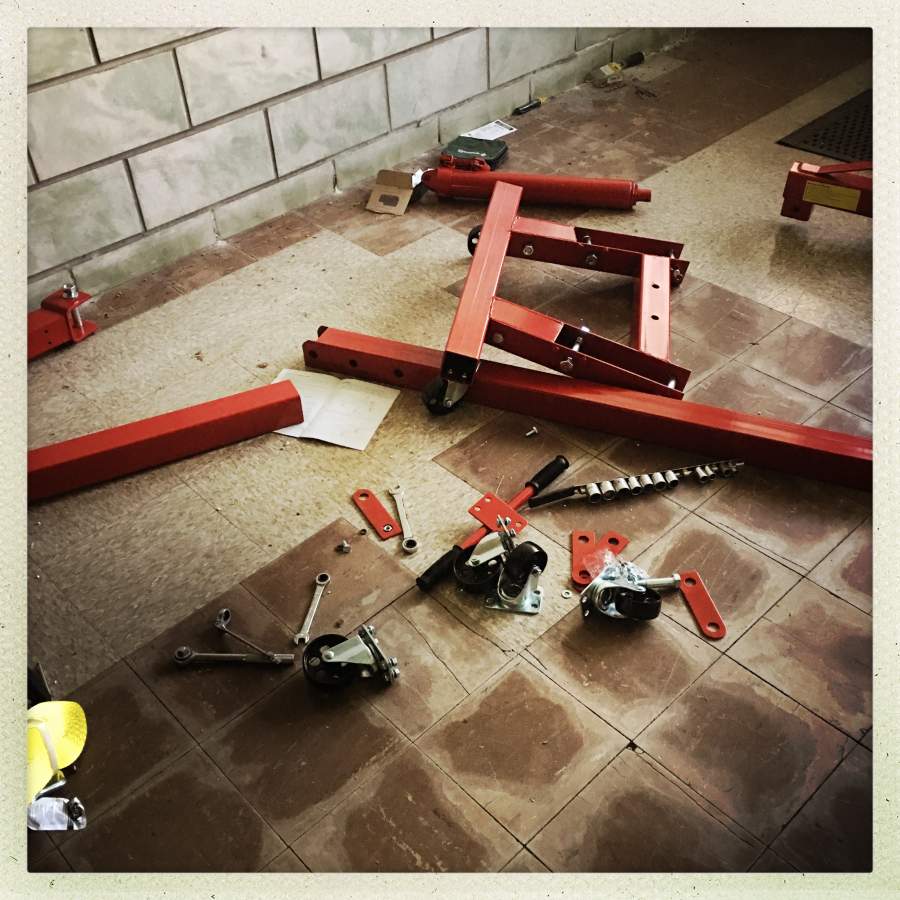 I have also put word out on the local whisper network (i.e.: my neighbor Bob) that I am going to be looking for an experienced machinist who’ll be willing to come check out my set-up, check the machine out for safety, and teach me how to trim and straighten the edges of my billet-bars, and fly-cut surfaces. I’m terrified of great big machines but I have been deriving a sort of law: big static machines are probably safer than lighter portable ones. A table saw is dangerous, but not as bad as a portable circular saw. Surface grinding a billet on my belt sander is much more dangerous and time-consuming than doing it on the surface grinder, because the controls on the surface grinder are two feet from the wheel and with a belt sander you’re holding the work-piece up against an 80-grit belt using your thumb-meat.

Today, the trucking company delivered the steel I ordered to make the sandbox around the base of the forge. Or, they tried to. The guy showed up with the semi-trailer and handed me a small box that only weighed about 60lb/30kg. “Is there a 230-lb 4 foot by 8 foot sheet of steel back there?” I asked the guy (I used English measures because 230lb sounds a lot heavier than 100kg!) It turns out the trucking company didn’t load it, or something, and it’s lost or sitting on a loading dock somewhere. I’ve got my hands full right now, anyhow.