This is not a complaint. It’s just a fact, though, that sometimes projects get complicated. Things don’t work quite as simply as they ought to.

One thing that – pretty much basically never – works simply is rural truck delivery. Or maybe it’s just me.

The other day, the bench-top for my welding bench arrived (in a full-sized semi!) and that was “only” 250lb or so to get into the back of my Tahoe. But the “pièce de résistance” arrived yesterday, in the form of a bubblegum pink 16-ton forging press made for me by Coal Iron Works. It weighs in at a cool 700 or so pounds.

The trucking company calls (as they do) “We’re delivering it tomorrow. Uh, OK?” So I explain that it’s a bit hard to get to my facility and I hope they have a truck with a lift-gate, as was clearly specified on the bill of lading. “Yes! The driver’ll text you a half hour before he’s in the area.” So, yesterday afternoon, I get a text “I am about 10 minutes out. Where are you?”

It being frozen hell over at the shop, I am sitting at home, 10 miles away, wrapped in my fleece bathrobe, drinking coffee and pondering the disaster that is the American Political System. Run! Run!

I get there as the full-sized semi is pulling up. I had told the dispatcher that it’s hard to get back to my shop and they should send a shorty. Naturally, the driver heard nothing of this; he takes one look at the driveway and its steep ditches on either side and says, “not backing down that.” The best he can do is either take it back and I can come get it with my own semi (not happening) or: he can deliver it to the side of the road and it’s my problem. That’s when things start getting complicated.

The driveways at my studio are on a 25 degree slope, with riprap-filled ditches about 3′ deep. It’s pretty icy and it’s snowing. I have a 700lb forging press sitting on a pallet by the side of the road; motorists whipping by slow down to stare. Perhaps they think I am taking it out for a walk? 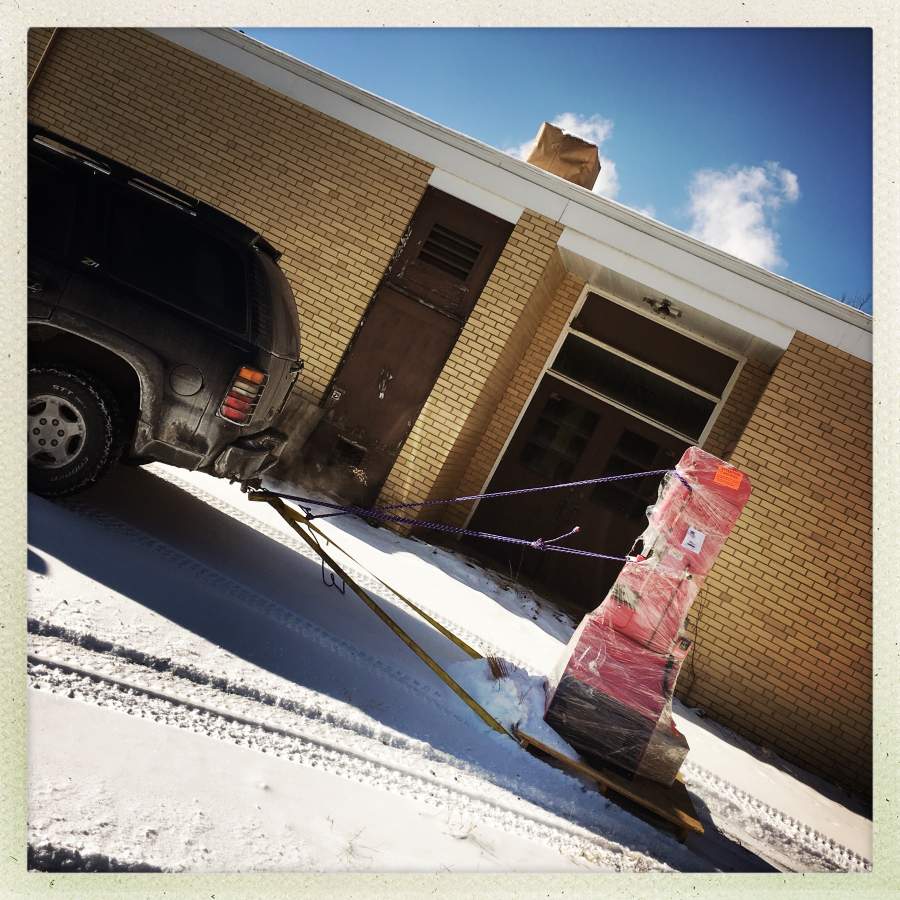 Why do they call it “jury rigged”?

So, that’s how I got the forging press up to the door. It worked surprisingly well, other than a bit of slipping tires; my truck didn’t slide side-to-side much because I had this great big land-anchor attached to the back. The upper guylines turned out not to be necessary but seemed like a good idea anyway: I could imagine the whole thing flipping over backwards and winding up in the ditch. 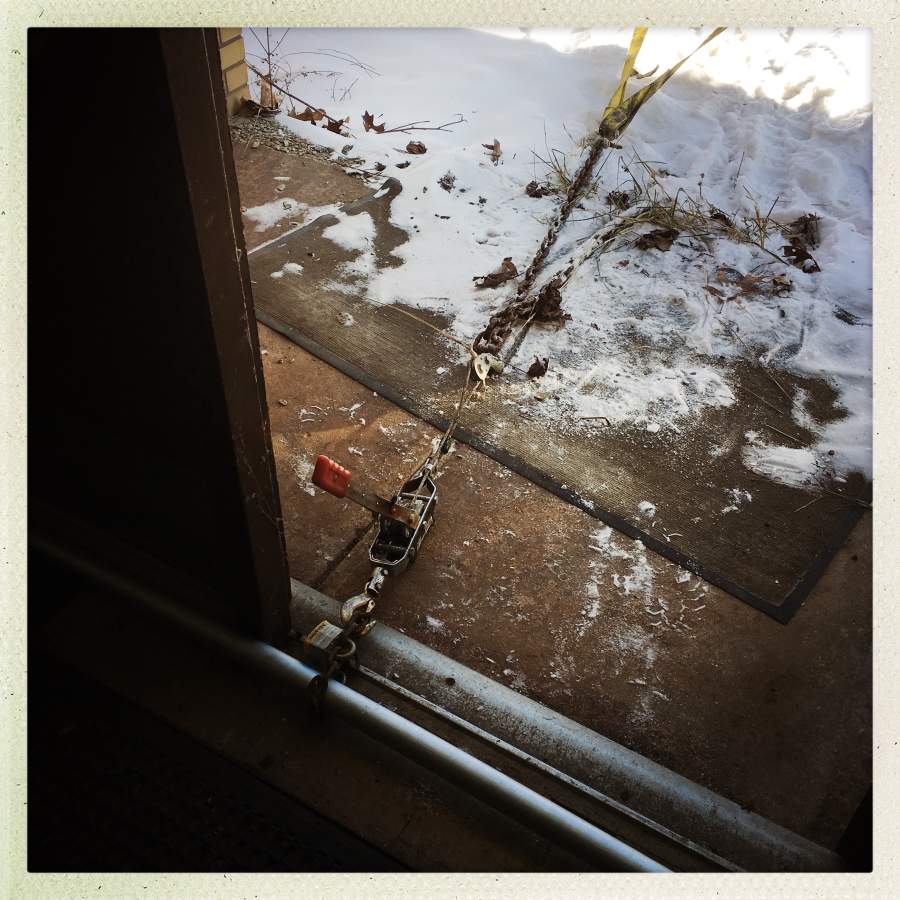 Then, it was 2 hours of winching the pallet across the parking lot, until it was up against the step leading to the door. At that point, I was numb, stupid, and hungry, and called it a day.

All night my subconscious cranked obsessively about how to a) get it up that single 8″ step and b) get it in the door (which is too small for the pallet, and too short for the palletized press.

This morning I got up bright and early, drank too much coffee, and headed over, with a plan. My plan was that I was going to take my hammer drill and a concrete bit, and drill holes in the floor as necessary so I could stage the come-along further up the hallway. I also took a car floor-jack that was going to go under the leading edge of the pallet so I could tip it back enough to crunch it forward up the step. So, I had a complete, though laborious, messy, and potentially disastrous plan.

As I went around the side of the driveway, I noticed that the next door neighbor had a bobcat.

So, I rang the doorbell; we talked, he said he’d be perfectly happy to help but he needed help getting the tire on the ‘cat inflated because it was off the rim, so I ran into town and got a 5-gal jerrican of diesel (my “thank you”) and some starting fluid (to blow the wheel back onto the rim) and in about a half an hour the ‘cat was operational and he drove over and scooped the darned thing right up onto the step in about 15 seconds. That is what hydraulics are for! Yes, I wasted my time with the come-along yesterday.

The press came off the pallet pretty easily and we slid it onto my shop dolly, and puffed and pushed the thing down the hall and off the dolly and unwrapped it. 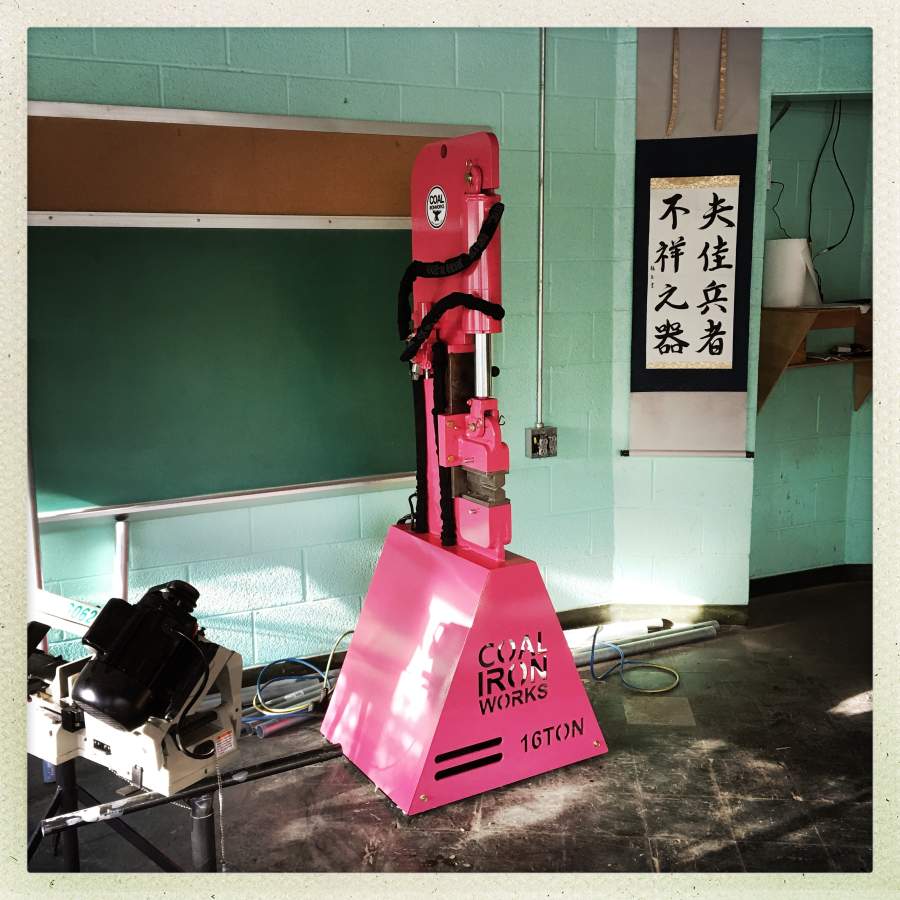 When I ordered the press, the nice people at Coal Iron Works said they could powder-coat it whatever color I wanted, so naturally I said “bright pink.”

I’m going to make sure I keep my fingers clear of the bitey end of that thing.

All that’s left to do now is to assemble the grinder bench (I have all the parts ready now) and bolt the grinders and vices and bandsaw to it, top the welding bench, finish the electrics hookups, and get the propane hookup. The propane company’s sending an engineer out the 17th to take a look at the forge – apparently they are concerned about just hooking stuff up and seeing how it works – they like to send someone who theoretically knows what they are doing, before they entrust a large steel bomb to random people off the street. I approve. That was a fun conversation:
Lady on the phone: “a 2-burner what?”
Me: “blacksmithing forge.”
Lady on the phone: “how much propane does it use?”
Me: “I have no idea. Lots, probably.”
Lady on the phone: (rolls her eyes so hard I can hear it)

My experience with projects is that each step of the project unlocks more steps. Sometimes it’s one step forward after 5 steps back. Helping the neighbor get his ‘cat operational was more effective, faster, and easier than drilling and winching along the floor – but at the time it felt a lot like I was dealing with side-quests in an adventure game. You know, you’re in the middle of preparing your armor for the final battle between light and darkness and before you can get the piece of leather you need for your armor, you have to rescue the old leather-worker lady’s cat from the tree. But the tree is guarded by an imp and the imp wants a can of baked beans that can only be found in a castle half a map away…

So that’s why I’ve been a bit quiet the last couple days.

I’m aware that Badger forge is excessively well-geared. Basically, I have all the nice stuff. This entire project is neatly funded within a limited budget based on selling my old Harley Sportster, which I hadn’t ridden in a couple years. Sure, it’s all still a bunch of money but I am convincing myself it’s “re-allocation” not “outlay” so much. Since I’m doing all the construction work and assembly myself, the costs are lower. I know I’m fooling myself; this is what I want to do when I retire, instead of traveling around the world staying in hotels and stuff – I’ve already done enough of that. So I’m preparing to stay home, get a couple dogs, and become a game-playing blog-posting metal-squishing hermit.

A Thesis » « A Weird Stress-Dream