There is topic I’ve wanted to explore but haven’t because I am not sure how to explain it or make sense of it, but thanks to the NYPD I think I’ve figured it out. The problem is “what does ‘helping’ someone mean?” at a strategic level.

It’s more complicated than it seems at first. When someone asks for help, it’s not so hard to figure out: you hear their request and decide yes or no, factoring in feasibility, long-term consequences, etc. But where it gets complicated is when someone doesn’t want your help, but you decide to barge in and help them in spite of themselves. Basically, that’s what cops are supposed to do, right?

The premise of barging in and helping someone in spite of themselves is that you know what’s best for them. In civil society that is, in principle, encoded in a body of law. That, in turn, is according to the principle of harm: if I’m doing something that harms someone else, the law’s bar for intervening is lower because there’s a greater likelihood that person already doesn’t want to be harmed. But if I’m harming myself, then the law has to argue that my choice of self-harm also harms society at large – it may increase society’s burden in terms of medical costs, or it may contribute to the moral decay of society, or encourage other bad behavior. That gets much more complicated.

The city’s top cop faced the City Council Monday and defended the NYPD’s approach to marijuana arrests, which has sparked a weeks-long fight between the lawmakers and police brass.

“This is something we need to do,” NYPD Commissioner James O’Neill said of busting people for smoking pot in public — the vast majority of whom are black and Latino.

“I understand that there are disparities,” O’Neill said. “If you look at the stats, I’m not going to deny that. But you’ve got to see the whole body of work that we’re doing here.”

I am tempted to put one of those animated .GIF-memes of someone going “whaaaaaat?” but that’s not compatible with this blog’s high level of gravitas. Seriously, though. Whaaaaaat?

Someone asked the Commissioner “what about the obvious racism in your policing statistics?”, and the cop basically said, “we have to do it wrong for your own good.”

“You acknowledge that there are disparities,” said Councilman Donovan Richards, chair of the public safety committee. “And the question is, how are you going to fix it?”

O’Neill shot back that the “question is how are we going to continue to keep people safe in the city.” 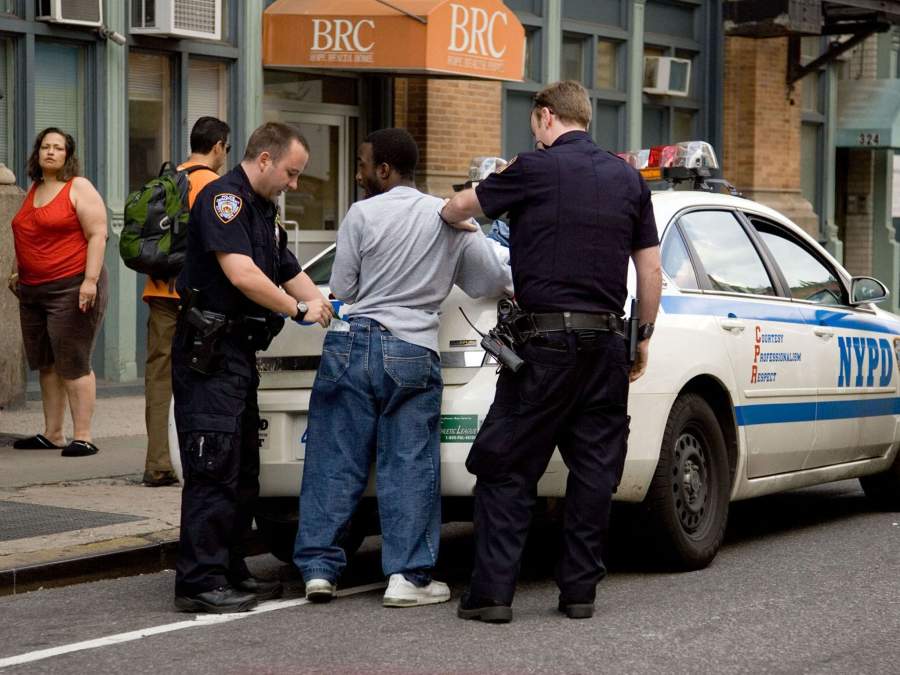 My claim possibly seems a bit shocking, but let’s deconstruct the situation further:

Cops arrested nearly 18,000 people for low-level marijuana possession last year — down from 29,000 in 2013, after they changed their policy to give a summons instead of making arrests for many pot possession cases. But people caught smoking on the street still get handcuffed — and 86% of those arrested are black and Latino. 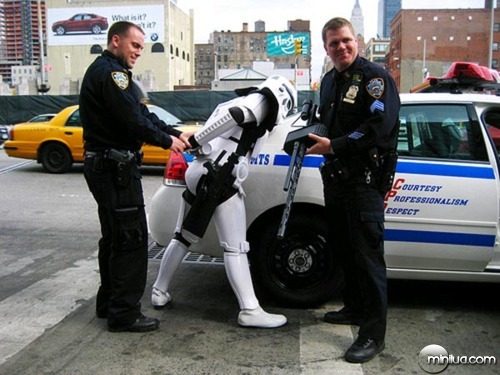 Oh look NYPD busted a white guy. If he was black they’d have shot him even if that blaster was properly licensed and he had an imperial permit

In other words, they’re not arresting anyone for “many” pot possession cases (unless the person is young, female, and “hot” and they want to take her someplace to trade for some sex) – pot has been decriminalized. Decriminalization is, literally, when the cops say “this offense is not harmful enough to society that we need to do more than write you a ticket for a small fine.”

If an offense is that harmless, you don’t need to stop and frisk for it.

Of course we know what’s going on in NYPD. When the commissioner says “how are we going to continue to keep people safe in the city” he’s talking about NYPD. He’s not thinking about the people of New York, at all, he’s just thinking about this as an NYPD problem: we have to justify our existence somehow! I believe that’s what economists call a “perverse incentive” – in which a reward structure serves to reduce the likelihood of a desirable outcome, rather than increase it. If NYPD were supposed to “smile and shake people’s hand and wish them good day” there’d be a “stop and greet” program. There would be SWAT teams kicking in doors and shooting people’s dogs, just to say “Have a nice day!” What there wouldn’t be is wealthy-looking white people getting that treatment.

This all brings me around to the philosophical conundrum I wanted to talk about: punishing people for harming themselves. Let’s suppose I have an activity that is basically harmless to anyone but me, but society’s masters decide that it’s a sin and ought to be illegal. Then, they pass a law and order the police to arrest and imprison anyone committing that crime. The premise is “we don’t want you doing that thing because it’s bad for you so in order to keep you from ruining your life, we’re going to ruin your life by throwing you in prison!” I don’t know a philosophical term for that, other than maybe “circular WTF.”

If the idea is that you shouldn’t smoke dope because you’re going to just sit around the house watching Big Lebowski and drinking white russians, let’s kick your door in, cuff you, a haul you to prison – thereby saving you from the life of a slacker by giving you an opportunity to join a prison gang. And we are going to really fuck your life up.

This is the same logic that leads our politicians to talk about helping people in Syria by dropping high explosive on them. Hey, if it works in Syria, maybe they’re going to try it in New York next.

A school district in New Jersey plans to punish students who took part in the nationwide walkout on Wednesday against gun violence with two days of out-of-school suspension, according to reports.

“As punishment for not coming to school, we are going to send you home from school.”

By the way, random google image-searching for “NYC stop and frisk” returns an awful lot of pictures of white guys digging around in black guys’ pants. They’re into it.

The stop-and-frisk idea is based on a theory of policing that said that you should enforce against even minor infractions because that way you create an environment in which the police presence is obvious and criminals are deterred. By the way, that theory was based on psychology studies that have failed to replicate. That probably has something to do with why that theory, when put in practice, produced no favorable outcome. (It produced a huge backlog of cases in the courts and collected lots of fines, so in terms of perverse incentives, it worked) Psychology and social sciences fail once again.

This Would be Pretty Cool » « Stephen Hawking