Recent discussion in some comments brought up the nature/nurture question and Steven Pinker’s book The Blank Slate. 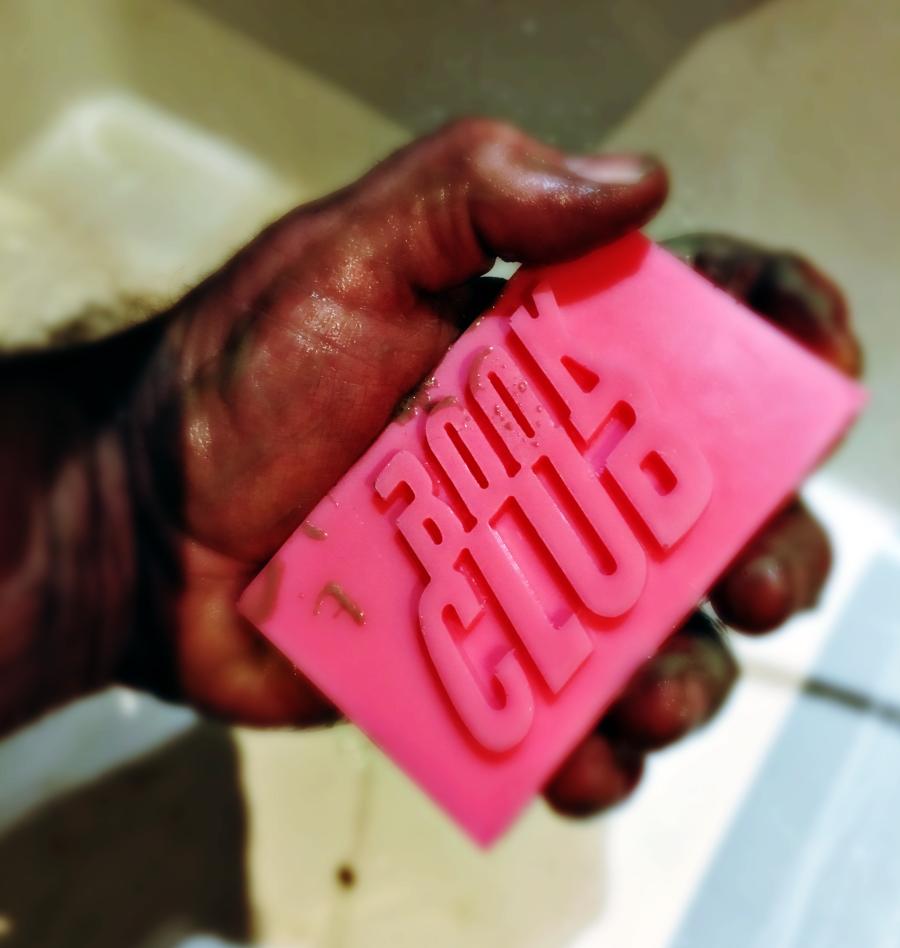 There is one part in the book which I remembered distinctly as a muddled-seeming swat at feminism. But, at the time when I read the book (2002) I didn’t really care very much because I interpreted Pinker as taking sides in a theoretical point between feminists. So, I blew past his argument but its existence stuck in my memory; I was mostly paying attention to see if he offered a good defense of evolutionary psychology.

I thought, as an exercise, perhaps we could collectively take a look at a few specific pages from Pinker – the ones I remembered – and see what’s there. Since I know FtB’s own H.J. Hornbeck is also interested in this topic, I’ve hinted broadly that he might also wish to take a look at these specific pages, since I value his thoughts greatly. Update: H.J. got hung up on the first sentence [reprobate spreadsheet]. He did a much more detailed reading.

We’re going to focus here on Pinker’s characterization of feminism, found beginning on page 341 and ending on 343.[of the 2002 edition] I will include those pages below, so that you can review them. (don’t read the pictures, there’s actual text, those are just there for decoration) 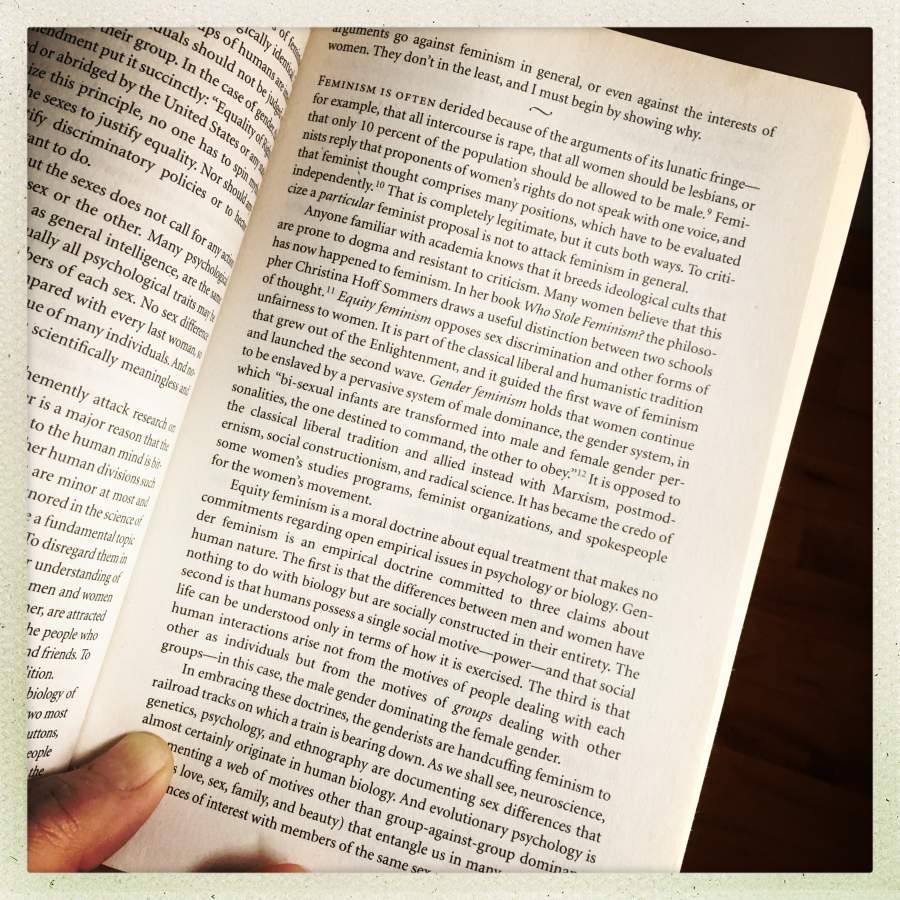 One more observation then we can start to look at what Pinker’s saying: there are substantial differences between the text (which I pulled and reformatted from a PDF of a more recent E-book edition) and the 2002 version. It shows some effort that I interpret as an attempt to shore up his argument, or tone it down, in various spots. For example, in the 2002 edition he writes:

It is not just gender feminism’s collision with science that repels many feminists. Like other inbred ideologies, it has produced strange excrescences, the the offshoot known as difference feminism.

It seems to me that there is a great deal of well-poisoning and strawmanning going on, here. Also, some appeals to dubious authority Christina Hoff Summers and Camille Paglia being two that I would be cautious about labelling at all.

We must also note that Pinker is using Christina Hoff Summers’ labels “gender feminism” and “equity feminism” which are, I would say, well-poisoning right there. The form of feminism that Pinker seems to be describing as “gender feminism” appears to me to be an outright caricature of an amalgam of extreme feminist/separatist views. It seems to me that often, when men write about feminism, they fall for the trap of caricaturing an extreme feminist viewpoint as – basically – Andrea Dworkin. But, they don’t want to come out and say they are using Andrea Dworkin as a strawman caricature of radical feminism. Why not? Because, if they do, it’s pretty easy to dismiss the whole argument by pointing out that Dworkin (though she made some very interesting points, I must say) was hardly mainstream.

It seems to me that Pinker is doing a sneakier version of a form of anti-feminist maneuver that consists of saying “well, there are some really extreme feminists, and, uh, cultural marxism, political correctness, and therefore these people are anti-science.” That maneuver also depends on Pinker’s fallback that, you know, speech is being suppressed by radical thinkers who are yelling at people about things:

It has became the credo of some women’s studies programs, feminist organizations, and spokespeople for the women’s movement.

Basically, what Pinker is doing here is like saying that Alex Jones is a great example of the republican base. Anyone saying that would be dishonest – Jones is a great example of the lunatic fringe of the republican base but when Pinker is obliquely referring to Dworkin he’s saying, in effect, that the person jamming open one end of the Overton Window defines the window.

What’s most bizzare about this, to me, is that Pinker’s trying to pretend to be all sciency but instead he just charges in and starts waving his hands and supporting his hand-waving with assertions supported by dubious authority. I think that, somewhere in his mind, he is trying to say something profound about feminism, but he has failed to understand even the most basic problems of labelling: that people lose track of your argument because they start using your labels – and labels aren’t an argument.

Men and women have all the same genes except for a handful on the Y chromosome, and their brains are so similar that it takes an eagle-eyed neuroanatomist to find the small differences between them. Their average levels of general intelligence are the same, according to the best psychometric estimates, and they use language and think about the physical and living world in the same general way.

Did he just throw Evolutionary Psychology under the bus, so he could take a halfhearted poke at feminism?

Now, I remember why this piece of Pinker made me go “huh?” and keep reading: I’m not sure what he is trying to accomplish with this bit other than to poke at a caricature strawman of feminism, and show that he understands damn little about feminism. Feminism is not some great post-modern cultural marxist WTF that comes in with a book of rules for proper thought and torments everyone who doesn’t think right. It’s a very big, broad, belief system that is fractally complex and which absolutely does not caricature easily; I remember asking a friend of mine, a professor who teaches gender studies at a notable university in Massachusetts, about Dworkin – because the things she said sure seemed a bit radical to me – and I got what I thought was a fairly good answer: it’s complicated, like all belief systems, even a single individual who is part of an overall movement can hold views that are all over the place, in terms of that movement. I’ll also say that that friend thinks Camille Paglia is an attention-seeking contrarian who is attempting to be a glittering pseudo-intellect but hasn’t got the chops for it. That’s about my assessment, too.

Pinker seems to be pointing at this radical fringe, as defined by Christina Hoff Summers who is also a dubious character who is more or less a radical fringer, in her own right. That’s not how to define the landscape of a field of thought.

What do you think?

The Closest He Ever Got to a Blast Furnace… » « Ask the Strategic Genius: Honesty Under Pressure