Depending on how you want to count it, the US Government killed about a half million Americans using nuclear weapons. That’s a half a million more than the North Koreans, or anyone else, have.

That’s also not counting all the American lives that were shortened by working with radioactive material at Hanford and Oak Ridge, or Idaho Falls, Los Alamos, and other places. These are US citizens who were on the receiving end of nuclear weapons.

The US Government had plenty of knowledge about the effects of nuclear weapons. But that wasn’t enough: they played with them like they were toys. And they did human experiments without the informed consent of their subjects – it wasn’t quite “Mengele-esque” because Mengele’s subjects were simply compelled whereas the American test-subjects were just ignorant. “Hey we need a couple of volunteers for an experiment” was hardly informed consent, nor was dragooning a punishment detail into being test subjects. The experiments, however, were Mengele-esque in their pointlessness: the US Government already had a very good idea what nuclear weapons would do to people; the energy release was predictable and the shock/thermal effects could be calculated – like Mengele’s experiments it seems as though they were done “because we can” and for no other reason.

If you gave a bunch of thoughtless and brutal teen-agers nuclear weapons, and delivery systems, you’d expect this kind of “hold my beer” ‘experiments’ – it’s sad to think that Kim Jong Un’s nuclear testing program is more focused, more disciplined, and far less damaging than the US’. I’d hypothesize that the reason the US is so upset about North Korea’s nuclear ambitions is because they’re afraid the North Koreans will make the same kind of mistakes that we did, except that would require a degree of self-awareness that the US generally lacks. The North Koreans have not killed a half million North Koreans, or anyone else, with nuclear weapons – so far.

When that footage was shot, there was already plenty of understanding of the various health-effects of various types of radiation, as well as the eye damage that was consequential to staring at a nuclear weapon going off. Of course these guys had no idea about it; they trusted the commanders to worry about their interests. That’s what leaders are supposed to do, right?

What kind of cancers did these people develop? Plenty.

What kind of cancers did all the people downwind of the explosions develop? Plenty.

Photographic emulsion manufacturers like Eastman Kodak knew about it [rj]:

In the 1950s and ’60s, the Atomic Energy Commission doused the United States with thyroid cancer-causing iodine-131 – and 300 other radio isotopes – by exploding atomic and hydrogen bombs above ground in Nevada. To protect the dirty, secretive bomb-building industry, the government chose to warn the photographic film industry about the radioactive fallout patterns, but not the public.

In 1951, Eastman Kodak Co . had threatened a federal lawsuit over the nuclear fallout that was fogging its bulk film shipments. Film was not packed in bubble wrap then, but in corn stalks that were sometimes being fallout-contaminated. By agreeing to warn Kodak, etc., the AEC and the bomb program avoided the public uproar – and the bomb testing program’s possible cancellation – that a lawsuit would have precipitated. The settlement kept the deadliness of the fallout hidden from the public, even though the government well knew that fallout endangered all the people it was supposed to be defending.

There were so many tests, that a huge fallout cloud rained across the entire midwest USA. 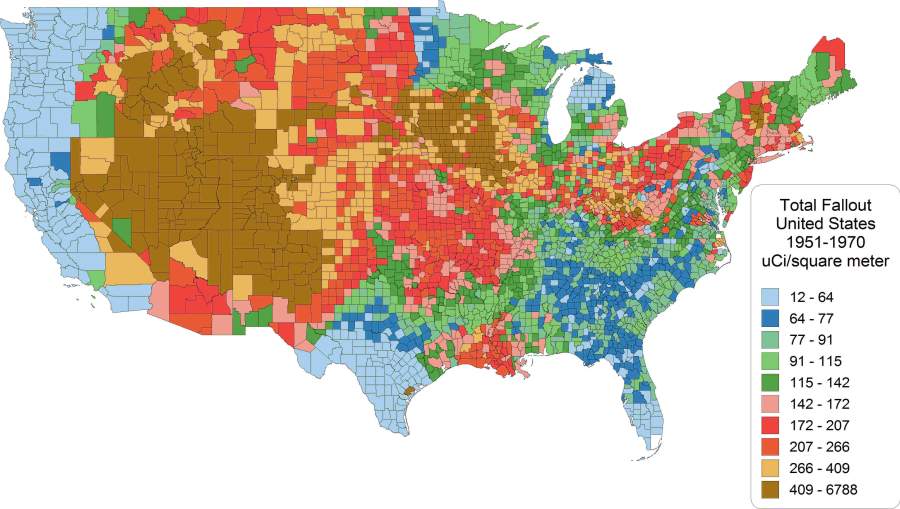 This, from a government that was supposedly doing this to protect its people. 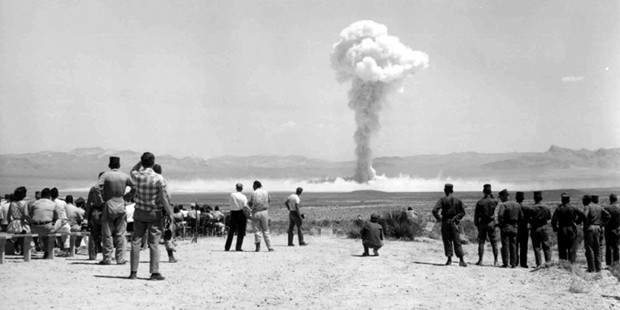 Most of this was unnecessary; once Feynman’s arrays of human computers, coupled with John Von Neumann’s monte carlo simulations and the two test-cases that were fired on Japan, the parameters of the shockwaves, thermal energy, etc – were all calculable. Having a bunch of people sit there and witness it was pure, messed-up fun.

Where does the half million number come from? It’s difficult to model the exposures, areas, populations, and mortality rate increases, but modern science can do that: [Meyers]

The Cold War saw the rapid development and deployment of nuclear weapons. To expedite its nuclear weapons program, the United States started to conduct atmospheric nuclear tests at the Nevada Test Site (NTS) in 1951. This deliberate policy decision created immense quantities of radioactive debris and much of this material rained down across the U.S.. One estimate places the total atmospheric release of radioactive material from the NTS from 1951 to 1963 at 12 billion Curies. In comparison, the partial nuclear meltdown at Chernobyl released approximately 81 million Curies of radioactive material (LeBaron, 1998). Knowledge regarding the impact of this pollution is limited to scientific and health studies conducted in the regions surrounding the NTS. Nuclear testing had large pollution externalities associated with it, but the magnitude and extent of the nationwide harm caused by NTS activities have yet to be measured. This paper quantifies one dimension of the external costs of these activities by studying the adverse effects of radioactive fallout on U.S. agriculture.

What Meyers does is look at the methods by which fallout would be absorbed into cattle and diary production, then consumed by Americans. That corn that was fogging Kodak’s emulsions? That was dinner for citizens all around the country.

After radiation was dispersed across agricultural fields, plants absorbed radioactive material and animals consumed contaminated grass. This radiation then might have caused sickness in animals and have been secreted in animal milk. Anecdotal and legal evidence suggests that nuclear test fallout harmed ranchers and farm animals living in the vicinity of the NTS. Note that this region is closer to the test site than the areas examined in this paper and the exposure mechanism differed because radioactive material was deposited through radioactive dust blows and not scavenged through precipitation. In 1954, ranchers in Iron County, UT sued the U.S. Federal Government asserting that their animals had died because of radioactive fallout from 1953 tests at the Nevada Test Site (NTS). These animals fell ill after consuming irradiated pasture in northern Nevada. In 1979 the U.S. Interstate and Commerce Committee opened an investigation into reported incidents of animal deaths from radiation poisoning because of the 1953 Upshot Knothole test series. The report discussed the fact that thousands of sheep and lambs belonging to the Iron County farmers died during the spring and summer of 1953. Around 12.1% of lambing ewes and 25.4% of new lambs dying (or were stillborn.) The report also details independent veterinary assessments identifying radiation poisoning and birth defects in the animals and the subsequent government cover-up conducted by both the Atomic Energy Commission and Public Health Service (US Government Printing Office, 1980). Further corroborating the story of the Utah ranchers, General Electric scientists Bustad et al. (1957) ran experiments on the biological and health effects of radioactive I-131 in sheep. Starting in 1950, they fed groups of sheep varying daily doses of I-131 from .005 nCi to 1800 nCi and followed the effects across years and generations. Starting at 15 nCi animals showed growth retardation and deformities, thyroid damage, reduced fertility, trouble nursing, motor difficulty, and patchy skin/balding.

Give or take 1,000 times worse than Chernobyl, except nobody was evacuated. 300,000 people were evacuated from Fukushima and 150,000 from Chernobyl, and there have been massive ongoing clean-up efforts. The US Government just let its citizens eat shit and die. 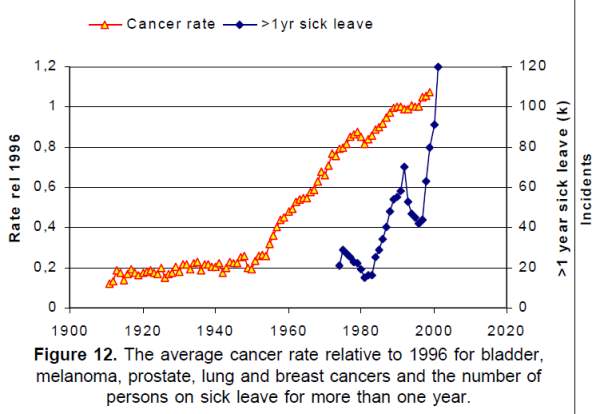 Why did cancer rates start rising linearly after 1945?

[Edit: the previous chart is one of many like it that you can find if you search for ‘US cancer nuclear testing’ – the problem is that many of them are woo-woo, some of them are not, many of them are cherry-picked data, and others are not. There are conspiracy nuts, “cleansing” fetishists, and legitimate medical professionals all slicing into whatever data they have, with various results. I want to caveat all such charts as “may be B.S. but interesting.”]

A key enabler of these events is government secrecy: the US military was able to do these things, and classify them, so that they never had to confront questions about their wisdom or competence. They never had to answer any questions because they were able to hold the answers secret. Now, just to make sure you are thoroughly depressed: this is the method that the US Government still takes regarding anything of questionable wisdom that it wants to do. All that facial recognition and tracking stuff? Classified. The surveillance? Classified. The torture program? Classified. The cyberwars against every nation in the world and the US’ own citizens? Classified. The surveillance aircraft overflights along China and the Russian borders, that might spark a shooting war? Classified. The time the Air Force dropped 2 armed H-bombs on North Carolina?[cnn] Classified. The Submarine encounters between US attack subs and other nations’ subs? Classified. These useless and destructive “experiments” are a perfect example of why the people in the government that want to act in secret absolutely should never be allowed to do so.

Naturally, the British had to have their fun, too. This video is unintentionally revealing. At 0:05 it says “servicemen were ordered to witness the drops, from the farthest side of the island.”

Other than “ooh, look, it bloody worked!” what did the British expect to learn? This is a stupid waste of resources and it was damaging to the people who had been entrusted to its own military. At 3:00 one of the interviewees says, “we’d seen others, but this was the biggest we’d ever seen.” Nice, so they gave multiple doses? What is wrong with these people?! I don’t see it in this particular clip, but the shockwave is so intense it blows some of the troops off their feet.

Review: The Sexy Brutale » « Monday Meslier: 32 – It is a Prejudice Which Has Been Handed From Father to Children