Icelandair, the original “hippie express” used to offer flights between the US and Europe for about half what the other air carriers charged. Their strategy was pretty cool – they used less expensive jets with shorter range, and did a brief stopover to refuel at Keflavik Airport in Iceland.

Depending on the time of day, you usually get a great view of the southern tip of Greenland. 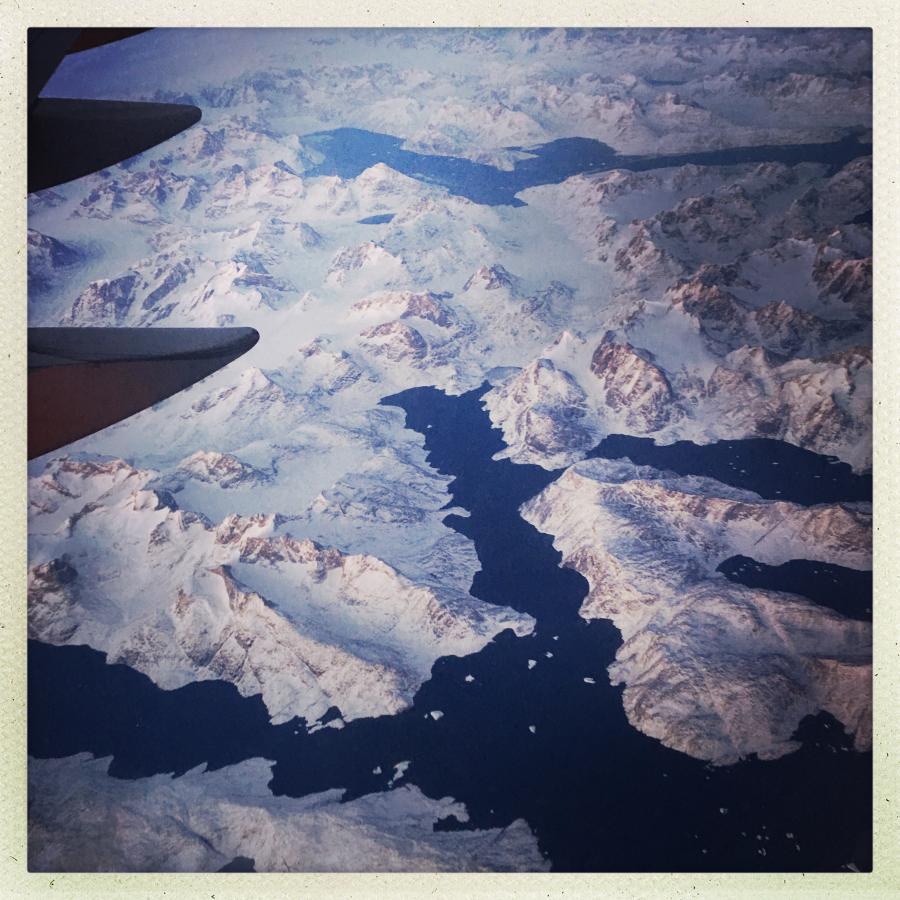 Greenland is pretty inhospitable-looking. From 5 miles up, my sense of scale gets messed with a bit – obviously, those are big mountains. How big are those chunks of ice floating in the inlets? Probably about the size of the one the Titanic hit.

You can see the pattern of the wind and snow, which also makes the sense of scale get confused: 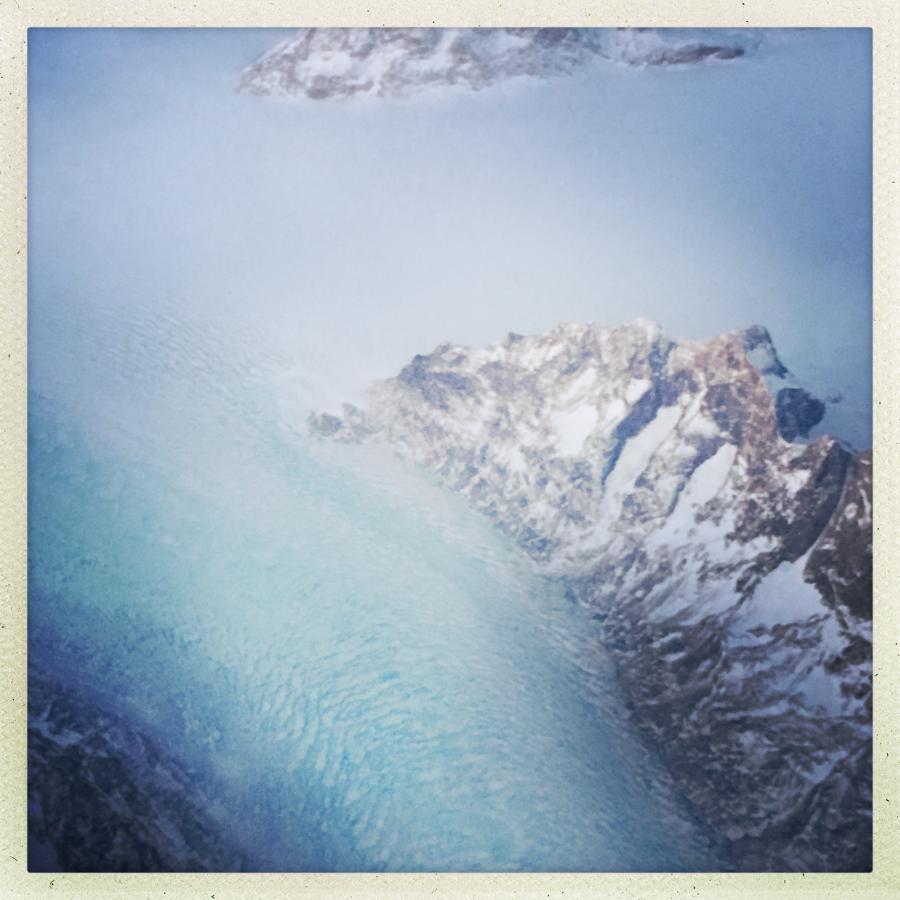 From 5 miles up, a “glacier” looks a lot like that spot on my driveway where the bank and the open field cause the snow to pile up, making it pack down and get impassible. I know it’s not the same thing, because the physics don’t scale up and down perfectly symmetrically, but it looks like it. And, basically, yes, that’s a big slush-mass heading for the road. 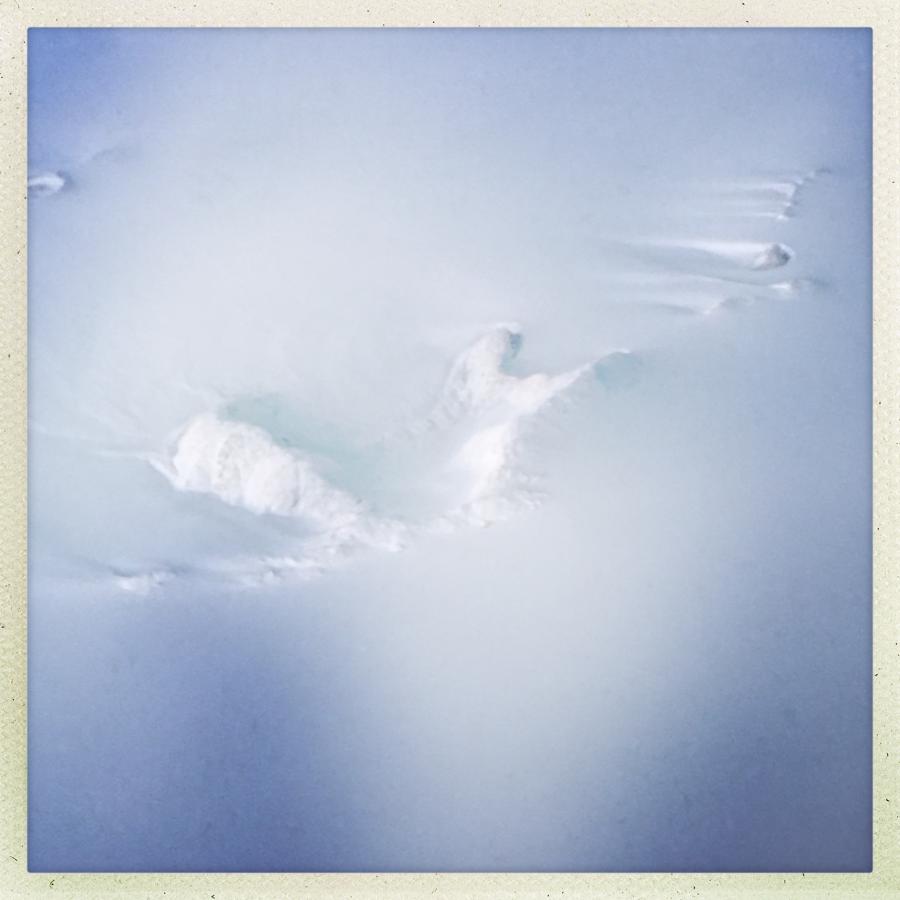 My iPhone camera had some trouble with that one, because of the lack of things to focus on, but that’s a region in the central highlands of Greenland. Once you get past the edges, it’s just a solid wad of snow with occasional things sticking up above the surface. I assume that what we’re looking at here is a mountain-top. Look at the way the snow blows across and makes the same kind of forms that snow makes on a smaller-scale! If I put a snowball down in my driveway in the winter, it will soon look like that pattern in the upper right (except the prevailing winds go the opposite direction) – however, I imagine that, if I were standing down there, it’s a huge snow-cliff that I have absolutely no desire to be anywhere near.

I see similar patterns when I fly across Arizona and Utah, where the water has run off across the mountains and sandy valleys and it looks a lot like the silt in the ditch alongside my driveway. It makes me wonder if I could grab my camera and get some close shots of snow or silt, and maybe photoshop in a few signs of human life, and suddenly our brains would recognize it as being at a whole different scale.

Back in 1999 I did a trip to Korea, and the plane went up over the Bering Sea for what seemed like hours and hours. I experienced a cool illusion: there was nothing that indicated scale at all, so my brain couldn’t tell how far the gigantic sheet of cracked snow was from the tip of the plane’s wing. Sometimes I’d look out at it and my brain would go “whoah, we’re skimming the surface.” I made it a game to try to spot any sign of human activity and saw nothing for hours. I know there are people who wander around down there, but – nope, nope, nopeitty nope.

My memories of Greenland, from my childhood, are that it was all white – there was no visible rock at all – not even on the leeward side. Maybe this is climate change, maybe it’s my bad memory. I didn’t see icebergs floating down toward Labrador, which I used to see a lot of. 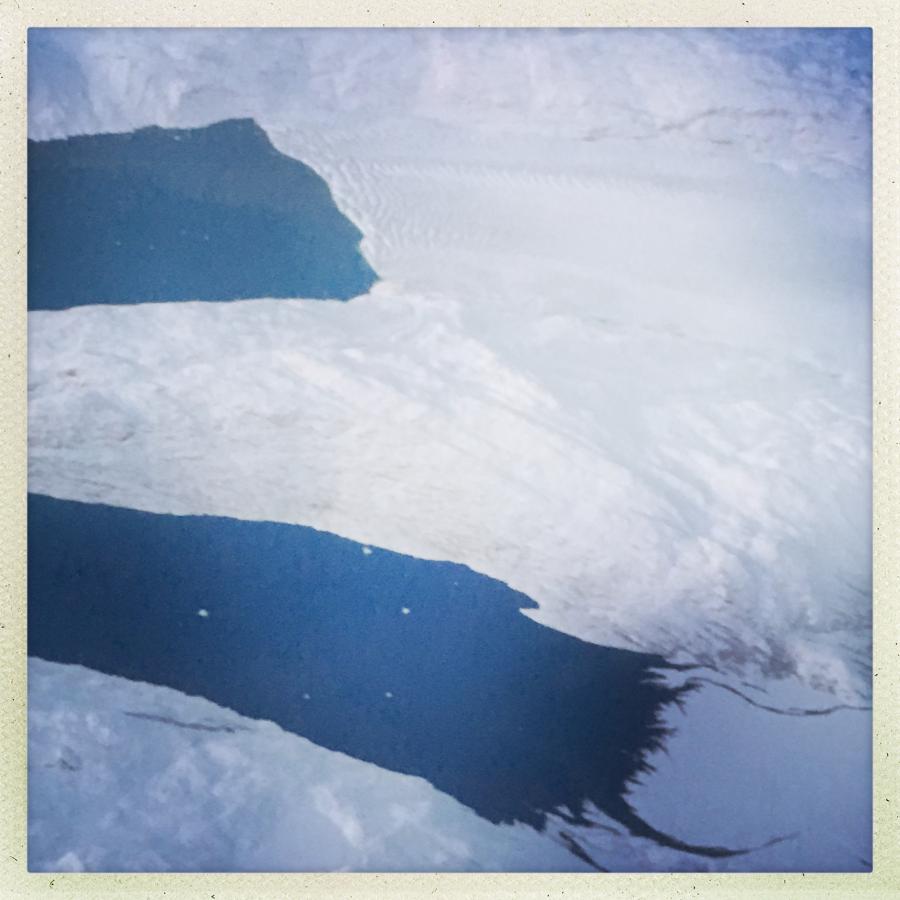 On the windward side of the island, there are more glaciers but I guess the icebergs are just blown back up against the face of the glacier.

I’m a bit embarrassed by the low quality of these photos, but I refuse to haul my good camera around – mostly because putting it through security is a big pain, and carrying a camera bag screams “steal me!” so I got in the habit of hand-carrying my camera everywhere. That’s good exercise for hand-strength. Hey, someone needs to make a “tactical camera” that can double as a bludgeon and that has a built-in spork. 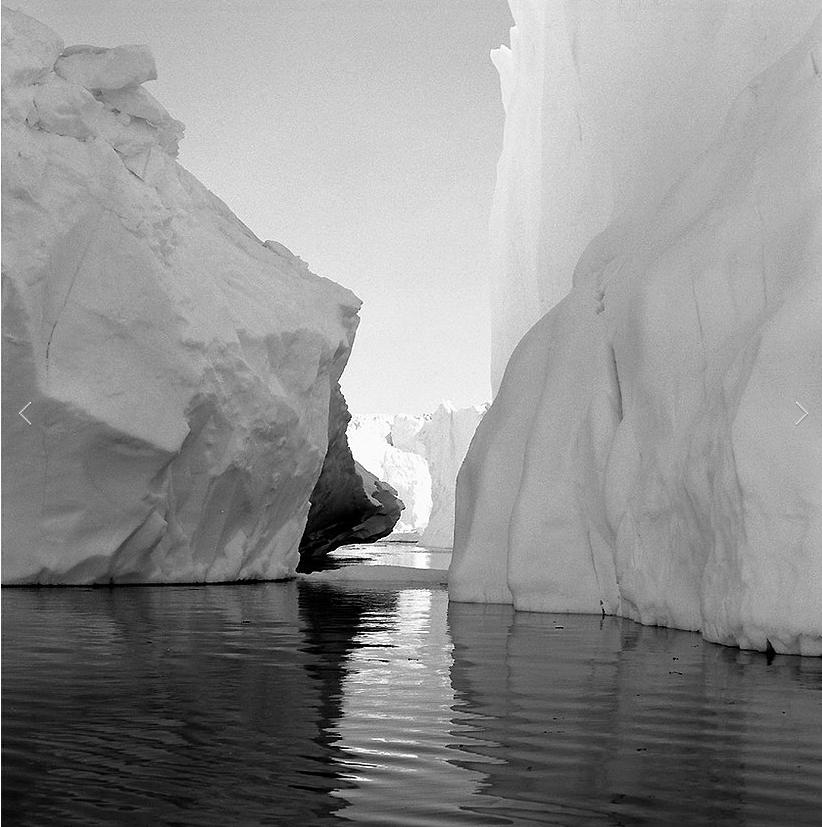 Sorry about the fwd/back indicators, this is a screenshot. [source]

I have a print of Deneyer’s icebergs hanging on my office wall, right next to a print of lower Antelope Canyon that harmonizes perfectly with it. In black and white, the ice and rock look the same, the textures are the same, the bends and folds and strata are similar.