My friend Aaron T. suggested this book to me.

Usually I read military history in an attempt to extract a big picture of events from the details.

Victor Davis Hanson’s new book is a strategic view of WWII [amazn] treating the war as a set of overlapping strategic problems that are discussed individually. To put it mildly, I find this fascinating. At first I felt a bit put off because some aspects of the war appear to be viewed repetitively – I was wondering “is this a bunch of articles that have been bound together?” before I realized that the intent was to make his arguments stand on their own, in each area. When I read something critically, I am constantly weighing whether the author is pulling any tricks or putting his thumb on the scale and even with my skepticism sensitivity knob on “11” I don’t catch anything in Hanson’s analysis that seems unfair. There are parts that make me uncomfortable, such as frank discussion of the value of the strategic bombing campaign and the question of how much it shortened the war (Hanson’s answer: it shortened it enough that it was probably a wash, trading dead Japanese and German civilians for dead Jews and Russian and other European civilians). 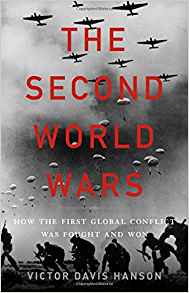 I’m used to reading military history that focuses on a narrow area – for example: the North Africa Campaign – and the various events and trade-offs that theater commanders had to deal with. From that, I try to draw some conclusions, usually “Wow, that was badly run” or “Rommel was overrated.” Then, I check those conclusions against my memory and other things I’ve read and see if they hold up. My experience reading this book is very different – Hanson drops the conclusions and the facts from which they are drawn, and sometimes digs down to a necessary level of detail, but otherwise maintains his attention at the level of the big trade-offs: the axis did not coordinate its grand strategy effectively because Hitler was an impulsive gambler prone to sneak attacks. Reading an account of the Russia campaign, it’s pretty easy to see that Hitler’s decision-making was bad, but I’m not used to thinking about how Hitler’s strategic blunders affected Mussolini’s – which, of course, they did.

When World War II broke out in 1939, Germany did not have a serious plan for defeating those enemies, present or future, that were positioned well beyond its own borders. Unlike its more distant adversaries, the Third Reich had neither an adequate blue water navy nor a strategic bombing fleet, anchored by escort fighters and heavy bombers of four engines whose extended ranges and payloads might make vulnerable the homelands of any new enemies on the horizon. Hitler did not seem to grasp that the four most populous countries or territories in the wolrd – China, India, the Soviet Union, and the United States – were either fighting against the Axis or opposed to its agendas. Never before or since had all these peoples (well over a billion total) fought at once and on the same side.

Not even Napoleon had declared war in succession on so many great powers without any idea how to destroy their ability to make war, or, worse yet, in delusion that tactical victories would depress stronger enemies into submission. Operation Sea Lion, Germany’s envisioned invasion of Britain, remained a pipe-dream – and yet it offered the only plausible way to eliminate Britain from the war that Hitler had started. Grand Admiral Raeder, then head of the Kriegsmarine, repeatedly warned Hitler that an amphibious invasion of Britain in 1940 was quite impossible.

When your head is down in the tactics, reading about the Battle of Britain, operation Sea Lion sounds like a possibility – because it was a concern – people would have fought and died and it needed to be taken as seriously as Hitler’s invasion of Russia; ultimately, it was doomed to failure and if it had happened it would have had the effect of shortening the war considerably.

Hanson makes a fascinating point: appeasement was partly responsible for Hitler’s willingness to be so aggressive; there is a good chance that had other powers threatened to stand up to him more aggressively, he would have realized that his strategy of attacking everyone was not going to work. Another point Hanson makes that is forehead-slappingly obvious in retrospect is that Hitler was re-fighting WWI in his mind – France being a power that had resisted Germany tooth and nail in WWI, and Russia being a power that collapsed when it was handled roughly. When France collapsed surprisingly quickly, and the British Expeditionary Force had to retreat and was nearly lost, Hitler may have come to believe in his own blitzkrieg a bit much. But more importantly, he mis-calibrated and thought that since France collapsed easily, the Soviet Union was going to be even easier. He appears to have learned the wrong lessons from France: in spite of knowing the French had better tanks (at the time) Germany crushed them, so he ignored that the Soviet Union’s T-34s were also better and expected a repeat of the French collapse. Hanson’s point is that the French collapsed because of bad command/control and poor coordination with the BEF – a problem that the Soviet Union did not have. At the strategic level, the Axis was uncoordinated: Japan took the pressure off in Manchuria just in time to let the USSR re-deploy Georgi Zhukov and a huge force of men and armor to Stalingrad.

Hanson also makes his argument about logistics – throughout the book, he points out that the Germans’ approach to conquest made them weaker the more they took: they had to garrison more troops to hold more ground.

By any fair measure, Germany in 1939 – in terms of the number and quality of planes, armor, manpower reserves, and industrial output – was not stronger than the combined French and British militaries – or at least not so strong as to be able to defeat and occupy both powers. The later German-Italian-Japanese axis was far less impressive than the alliance that would soon emerge of Great Britain, America, and Russia – having only a little over a third of the three allies’ combined populations, not to speak of their productive capacity. After all, the United States by war’s end in 1945 would achieve a wartime gross national product nearly greater than that of all of the other Allied and Axis powers combined.

Hanson’s point is that WWII looked vastly different from past wars, because of the new innovations in technology, the ruthlessness of mechanized slaughter of civilians, and its size, but in the end, it’s all a matter of numbers and the Germans were doomed to being stretched thinner and thinner by a compulsive gambler.

This book was released in 2017, in the era of Trumpolitics, and Hanson cannot avoid making a few oblique points about how surprising it is to deal with a self-absorbed, paranoid, nihilist like Hitler. His message is subtle but the warning is deliberate:

By the late 1920s, the victors of World War I were still arguing over whether the disaster had been caused as much by renegade international arms merchants as by aggressive Germans. Profit-mongering capitalists, archaic alliances, mindless automatic mobilizations, greedy bankers, and simple miscalculations and accidents were the supposed culprits – not the inability in 1914 once again to have deterred forceful Prussian militarism and German megalomania. British and French statesmen dreamed that Hitler might be an economic rationalist, and that new trade concessions could dampen his martial ardor. Or that he might be a realist who could see that a new war would cost Germany dearly. Or they downplayed Nazi racialist ideology as some sort of crass public veneer that hid logical German agendas.  Or they saw Hitler as a useful – and transitory – tool for venting the frustrations of soberer German capitalists, aristocrats, and the Junker class. Or they believed National Socialism was a nasty but effective deterrent to Bolshevism.

Consequently, when Chancellor Hitler acquired absolute power and was ratified as Fuhrer on August 29, 1934, Allied statesmen assumed that the Germans would soon tire of their failed painter and Austrian corporal. Elites sometimes equate someone’s prior failure to gain social status – or receive a graduate degree or make money – with incompetence or a lack of talent. Yet the pathetic Socialist pamphleteer and failed novelist Benito Mussolini, and the thuggish seminary dropout, bank robber, and would-be essayist Joseph Stalin – traditional failures all – proved nonetheless in nihilistic times to be astute political operatives far more gifted than most of their gentlemen counterparts in the European democracies of the 1930s. The British statesman Anthony Eden lamented that few in Britain had ever encountered anyone quite like Hitler or Mussolini:

You know the hardest thing for me during that time was to convince my friends that Hitler and Mussolini were different from British businessmen or country gentlemen as regards their psychology, motivations, and modes of action. My friends simply refused to believe me. They thought that I was biased against dictators and refused to understand them. I kept saying, “When you converse with the Fuhrer or the Duce, you feel at once that you are dealing with an animal of an entirely different breed from yourself.

Skepticism knob on 11: Hanson appears to be more impressed with Montgomery and Patton than I am. My interpretation of that is that, from a level of grand strategy, they were adequate. Battlefield commanders make a difference but not that much of one, really, unless they are spectacularly incompetent or amazingly skillful or lucky. Hanson makes this point repeatedly. In one example that particularly resonates with me he mentions Michael Wittman’s legendary panzer-charge at Villiers Bocage – and then dismisses it as irrelevant to the outcome of the battle, let alone the war: at the scale of global conflict, the actions of individuals are almost always muted.

Hitler an impulsive gambler prone to sneak attacks: Knowing that Hitler was smashed on oxycodone and amphetamines [stderr] helps me understand that in context.