Friday I finished pulling down the drop ceiling over at the studio.

In 1958 when they were inventing dropped ceilings, they did them differently. Nowadays they hang on recessed rails suspended by wires. You can take them down by just stacking the tiles, then snipping the wires and putting the rails away. In 1958, the tiles were stapled to 2x4s that some poor construction worker ripped lengthwise into 2x2s in order to save wood. The 2x2s are bolted through the support beams with washers, and nailed together. They don’t just come down. 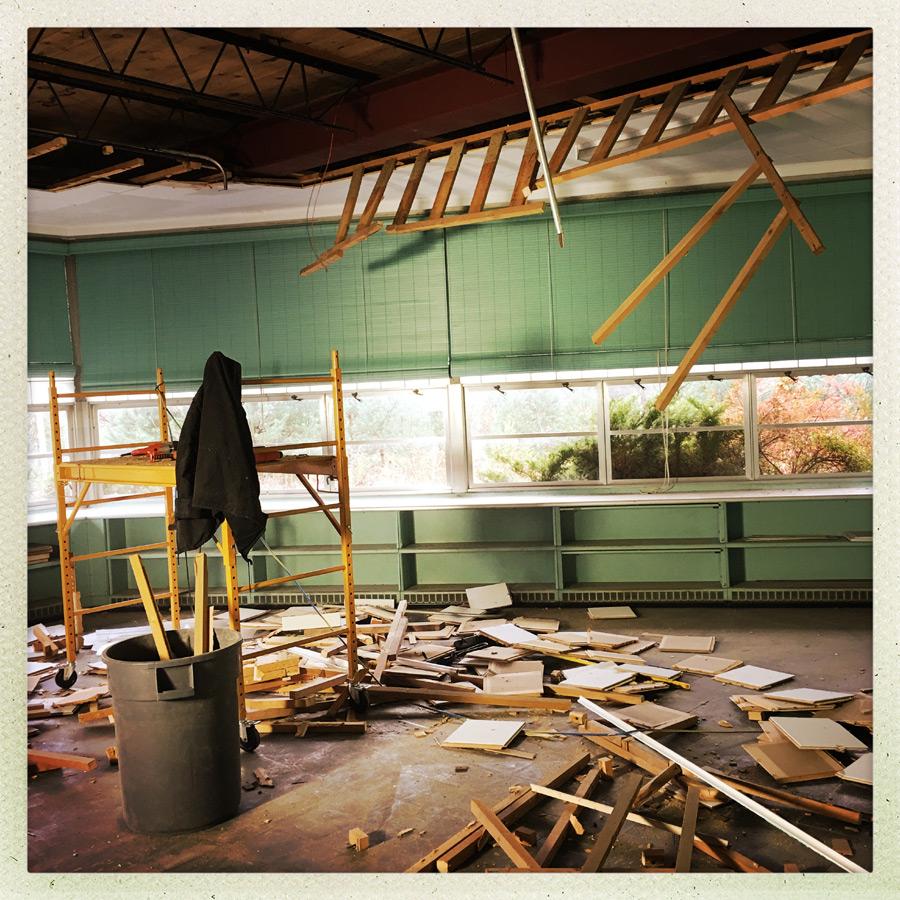 Closing in on the end wall

To make it more fun, there’s conduit carrying power to the lights, which are all, also, bolted to the lattice of 2x2s. The first time I did one of these demolitions, I unbolted everything, unnailed it, and disassembled it carefully. It took me a week. This time, I used a great big sawz-all and made lengthwise passes across the room, shredding and destroying, then stopping to pick up the pieces and haul them to the dumpster. Because of the layout of the building, that meant filling the garbage can (illustrated) and carrying it 100yd and down some stairs to the dumpster. It’s all good: I need the exercise. 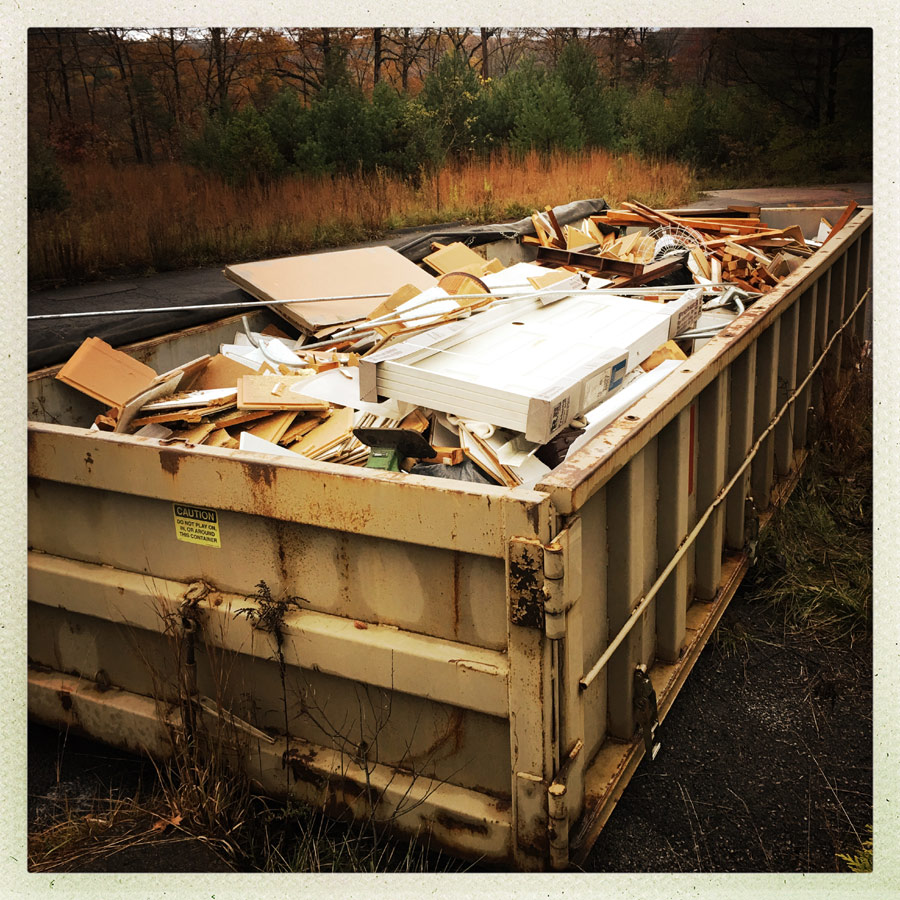 The 2x2s make up a lot of volume, as do the tiles. This is actually the second dumpster I filled. Since I had a dumpster, I thought, “why not get rid of some stuff?” which meant it was time to purge my old theatrical flats, construction materials, broken machinery, computers from the 1990s, and whatnot.

I’m a packrat. You probably figured that out. But I’m a “high functioning packrat” – I don’t keep most of it at home (well, except the basement…) – I keep it in my extended 5,500sf closet 10 miles from home. 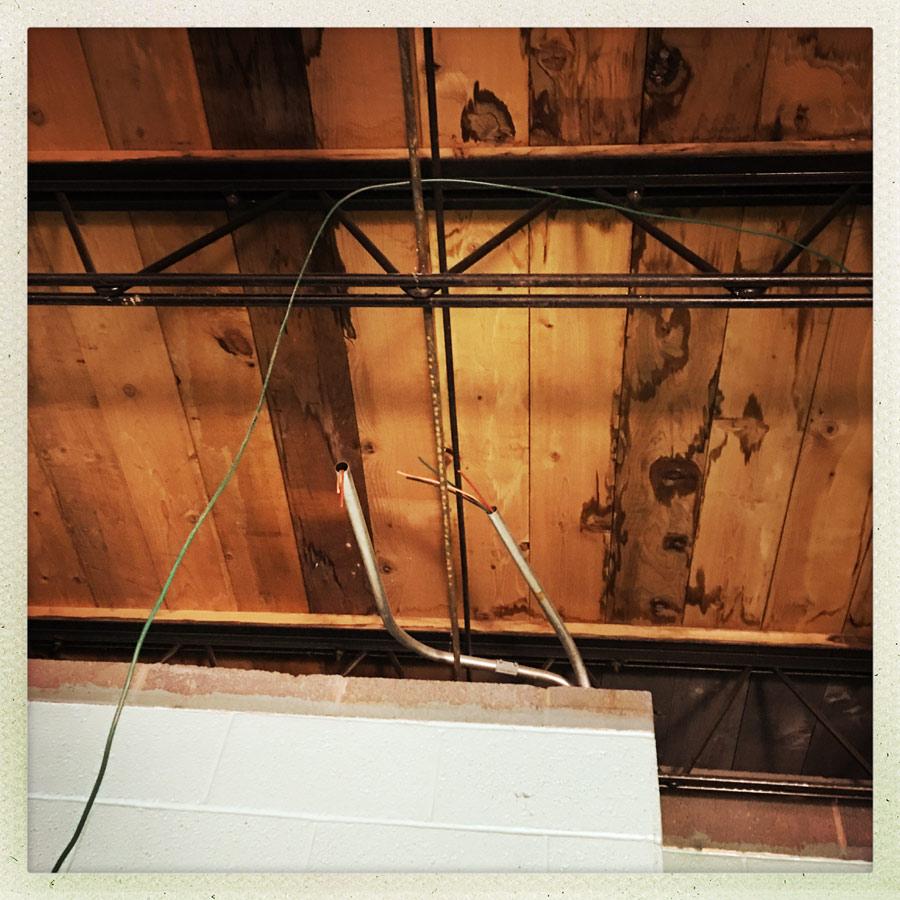 The way they ran the electricity was odd, too. the main power for each room comes in through conduits in the concrete slab (I bet that’s a doozie to fix!) and up into switch-boxes, then conduits up to the ceiling. But the builders used individually stranded wires, no grounds, and ran them in ways I still do not understand. Normally, you’d pull circuits to the switch panel and use the switches to interrupt the circuit to the mains. For some of the light circuits, they ran the power to the light, then made a loop back to the switch box to interrupt the circuit – it’s the same principle as a giraffe’s Phrenic Nerve. I.e.: it’s a relic of evolution.

I was reminded of this when I used the sawz-all to chop one of the conduits, and there was current running through it, even though all the light switches were off. For the rest of the power, I dissected it carefully, pretending I was defusing a bomb (the circuit breakers are old enough that I don’t want to trip them and have to try to identify them and un-trip them).

Once the ceiling is down, it’s pretty nice up there. Some signs of leaking where the roof leaked for about a decade, but the wood is all right. There is an air-space across the entire top of the building, which will help diffuse the heat when the forge is running. I expect the forge will also help dry the whole building out: win, win, win.

By the end of the 3rd day of chopping, unbolting, and hauling, I had the room broom clean. It’s an incredibly satisfying feeling. 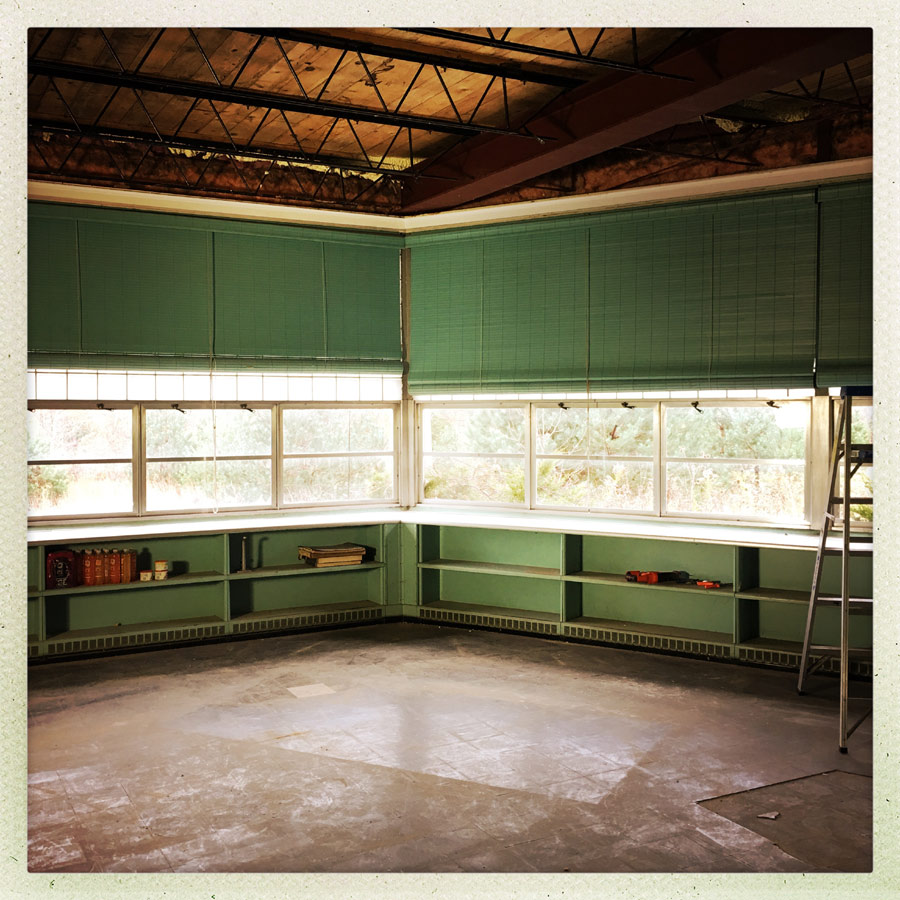 The old schoolhouse is packrat heaven (did I mention that I am a packrat?) Each classroom has a large walk-in storage closet, a small storage closet, and the outside of the room is metal shelves that also house the copper pipe and fin radiator system. It’s a really nice design, except the 1958 furnaces are doubtless incredibly inefficient, and the pipes are probably burst from freezing.

Those storage shelves are going to be so nice! I’ll use one for metal bars, one for abrasives, one for drinks, one for… etc. The big windows can unlatch and drop out, and I chose the westward-facing room because that’s where the prevailing breeze comes from. I won’t have to worry about suffocating (though I will set up at least 2 CO alarms).

There, and to the left are where I am going to build the benches for the grinder(s), metal cutting bandsaw, vices, and who knows what else. I expect I’ll build the benches next week, once I have the electrical system up and running so that I can use the metal cutting bandsaw to chop up the conduit I’ll be using as a bench-frame. One of the things I love about projects is getting everything done in the right order – my brain just automatically does that and it’s pretty good at it. Actually, it’s better than “pretty good” it may be “world class.” It sure comes in handy. 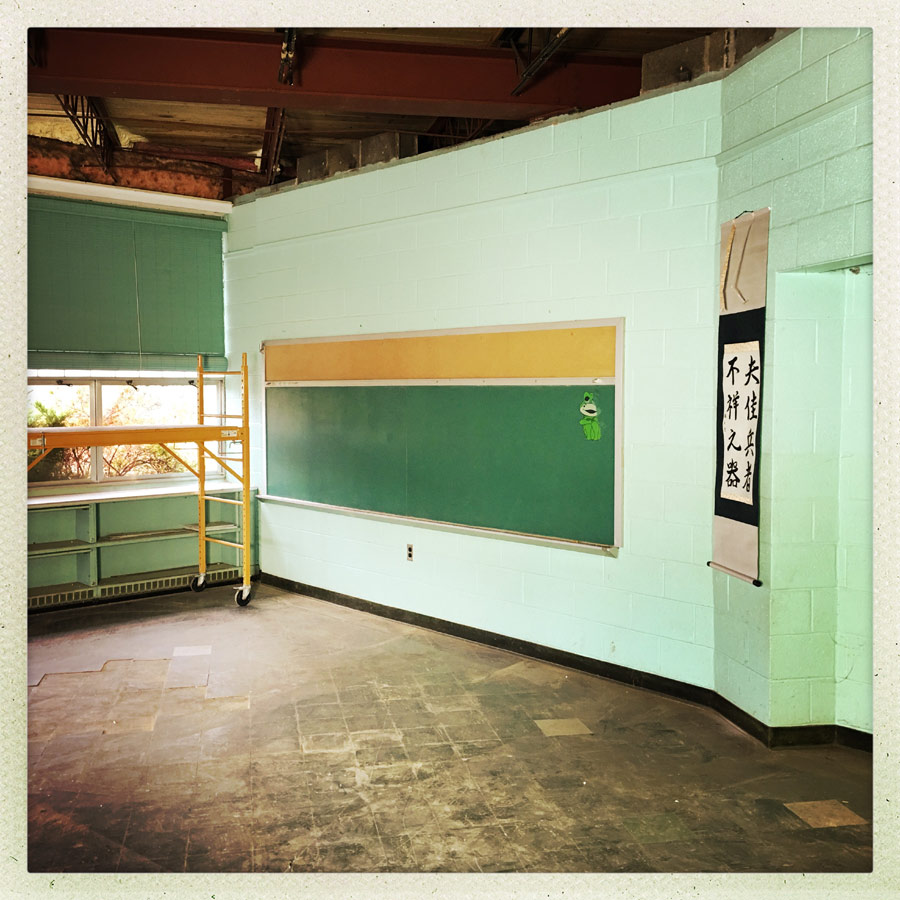 That’s where the forge, anvil (need to make a stand) and press will go. I’m going to leave the blackboard up to deflect heat off the wall.

The hanging scroll is by a friend’s wife, who is a Japanese calligraphy master. Occasionally I have an idea for a “scroll that must be done” and commission them to do it. I’m never in a hurry. This one, she started studying for last year, when I asked about it, and by some quirk of fate, he mounted it up in perfect colors to match the wall. I am going to have it there to remind me of an important thing:

The weapons of war are unfortunate instruments. – Lao Tze

I will probably make some weapons, eventually, but I intend to avoid producing “tactical” instruments; they are the most unfortunate of all.

You can’t see them from these angles, but I’ve also installed other important things: two fire extinguishers, a first aid kit, and a rack for brooms and dustpans. There is another blackboard/bulletin board on the other side of the room and I am going to make some blade-racks to mount on the upper part, and will thumbtack ideas and notes on the corkboard. 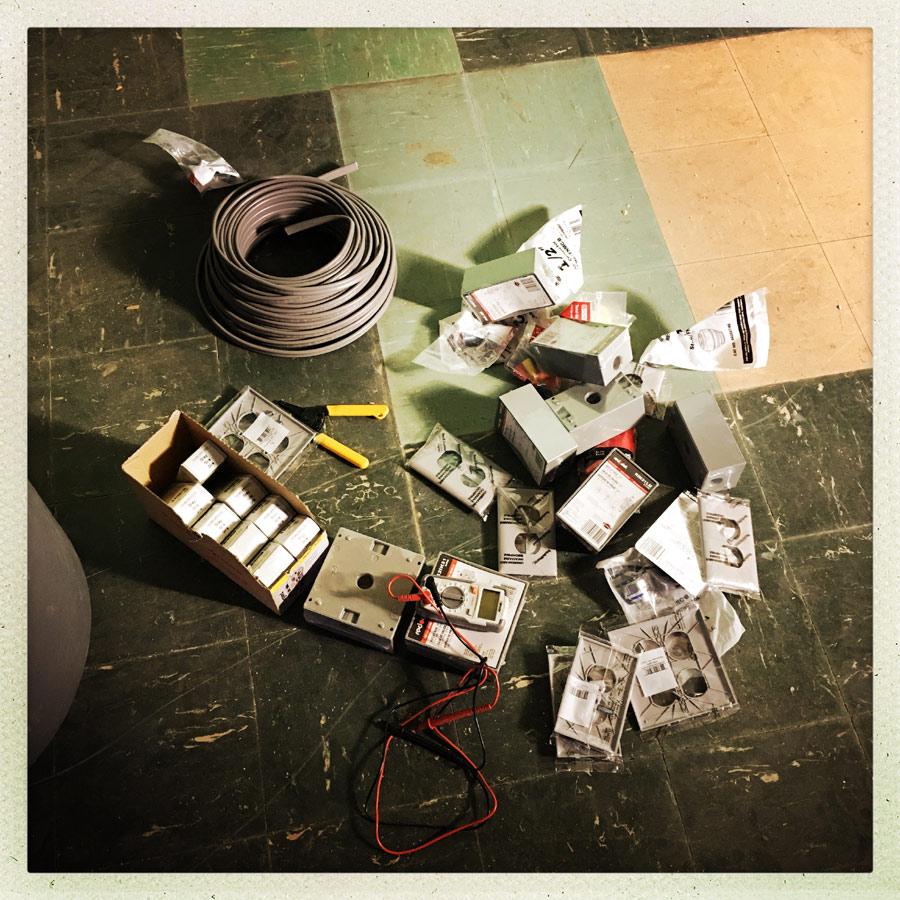 It won’t install itself.

Next up is electricity. Today I carefully dissected the entire power system and cleaned up all the wires. I’m going to need more gang-boxes for outlets, and new switches, and a few things but now that the old wiring is out, I ought to be able to string this pretty quickly and then power down the whole building, hook it up, and see what happens when I power it up.

Every time I go to buy wire, I am shocked anew at the cost of copper wire. The breakers in the panels are 20amp, so I am using heavy wire, and it’s $1/foot – that hundred foot roll was $110.

I got a bunch of hanging flourescent shop lights and I plan to hang them low on chains, so it looks like some kind of gothic dungeon in there. I did a similar trick in my photography studio: I put gang boxes on the ceiling and then hung LED spotlights in aluminum work-light fixtures, so there are little sharp pools of light and big areas of darkness. It makes the room look much bigger and gothier: win, win. I will have another switched circuit that controls LED studio spotlights on specific work-areas where I may want to shoot video.