I do a lot of public speaking; usually a couple of conference keynotes, and a dozen or more invited talks every year. During conference dinners and meet and greets, there is sometimes alcohol, and it’s hard to pass up a free drink, especially when it’s sometimes quite excellent.

Since 2013 I’ve pretty much stopped drinking at conferences; I had a run-in at a gig in New York with a sales guy from one security company, who’d also had a few too many and started liberal-baiting. I’m not sure if I’m a liberal, exactly, but I wound up leaving before things got ugly, and it gave me a lot of reasons to reconsider the wisdom of getting potted. Normally, I’m hard to anger, but with a couple of glasses of wine in me, I was seriously thinking about just flattening him. I took that incident as a warning sign. Then there was AUSCERT in 2013, when I split a few bottles of wine with Whit Diffie at the conference dinner and the next morning, when I showed up for a panel, the kindly Australians had given me a glass with 4 shots of tequila in it, instead of water. I took that as a comment on drinking and decided that I did not want a reputation for being unprofessional – that’s a sure-fire way to make sure you suddenly have a whole lot of free time on your calendar. 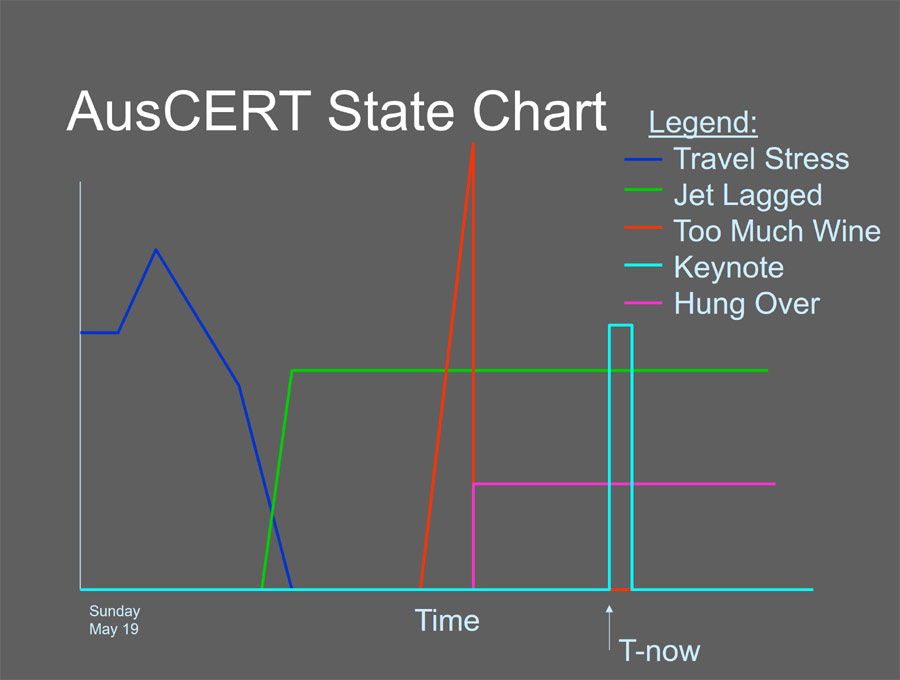 AUSCERT did inspire me to open my talk with this infographic, of which I am duly proud

Now, let me back-fill a bit: my degree is in psychology and the University where I studied is attached to a famous medical school, and the department was split between neuroscientists and old-school pop psycho-babblers. One of the topics I remember being really interested by was the affect of various things on memory. When we learned about how amphetamines boosted short-term memory I tested it by taking a hit of street benzedrine and cramming for my stats final (which I aced, N=1)  I also learned about the effects of alcohol on memory. At that time, I was not experimenting with alcohol, though as I have aged I notice a distinct difference between what I remember when I’ve had a couple of glasses of wine, and when I haven’t. Let’s not even get into talking about Ambien; I got some of that for long flights to/from Asia in the late 90s, and there are whole flights that are completely blank spots to me. When I broke my jaw in 2013 they dropped me under a general with some Fentanyl and there are two whole days missing from my memory. 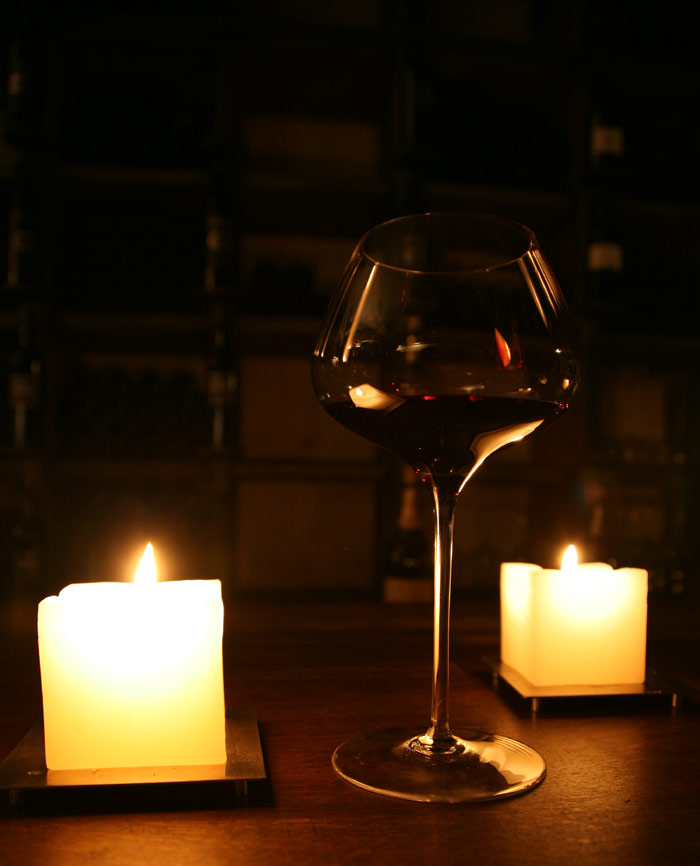 Just an illustration, from another dinner, IDC security conference, Ljubyana 2008

That wine interferes with our memory shouldn’t be news to any of you. But, as the conference dinner went on, I had a truly striking experience: most of the others at the table were speaking Quebec French, which is different from the French I learned as a kid in the south of France, and in Paris. When the dinner started, I could understand them just fine, and was able to dredge up bits of French to reply with in turn. By the time I had finished the first glass of wine a weird thing began to happen: It was getting harder to understand the Quebec French, and I was really having trouble assembling French of my own. It took me a few minutes to figure out, because I don’t even think in terms of “one glass of wine affects me” and I’d never experienced alcohol inhibiting what I’d consider ordinary speech. It was fascinating and, of course, I remarked on it to my dinner companions; I said “I have had one glass of wine and now I am having trouble assembling a sentence in French!” Their response, of course, was to pour me more wine.

As the second glass started to hit me, I felt a distinct un-meshing of the gears in my head. That’s the only way I can describe it. I had the distinct sensation that there was a translation engine running that had to interpret Quebec French into the French I knew, and that it was struggling to keep up. I’ve been very drunk before, and never experienced anything like that with English, presumably because my brain has gotten a lot of drill with that language. My French was melting away from me, perceptibly, and progressively. I was struggling to keep up with their French, and had to switch to English when I wanted to say something. Please don’t get the impression that I was bleary-eyed and potted on just two glasses of wine – that’s a pretty typical “no problem” amount for me (though I will not drive a car if I have had more than a half a glass of wine) the remarkable part of this experience was the explicit sensation of losing my ability to speak a language.

Of course, you probably know what happened next: my cheerful hosts gave me another glass of wine, in the name of science. By the time I was done with that, I was unable to understand Quebec French, at all, and I noticed – because I was now paying attention – that my English vocabulary had simplified slightly and I was using shorter sentences. I thought then, as I do now, that we probably think of our use of language as a unit, normally, and don’t pay attention to gradations of quality in our speech. Dessert came, and I excused myself, went to my room, took a long hot shower, and went to sleep; I had a long drive the next morning.

I’m 54 now and I notice that my memory is not what it used to be, in many ways. I’ve asked my dad, who’s 85 and as sharp as ever, and he says it’s pretty much what happens as we age. Dad, a university professor, was one of the hard-drinking academics of the 70s and 80s, I remember many wine-fuelled dinner parties with his colleagues, where I sat quiet and listened to drunken historians swapping stories of revolution and analyzing politics. He says that that slow erosion is typical and it’s probably nothing more; both of my paternal grandparents died with Alzheimers’ so I monitor my brain.

Have you ever experienced a comparable thing? Where a skill that you have a fairly good understanding of, begins to go away? I’ve lost certain manual skills through disuse, but this was sudden, and very perceptible.

When I was at NFR, we used to have an annual holiday get-together, engineering team meet, and feast. Some of the group didn’t drink, some enjoyed the Demon Weed(tm) and some drank. One of the engineers, Mark S., was a former NASA rocket scientist who loved measuring things, and entertained himself by going around the room before the party started, and had everyone do a “drop test” on a yardstick. The “drop test” is where you hold your fingers 2″ apart at the bottom of a yardstick that someone else is holding, then, when they drop it (ideally giving no cues) you pinch your fingers together and try to catch it. The drop distance is usable to measure reaction time; Mark made up a lookup table, and he did 3 samples of each of us, then as the drinking and smoking began he did another measure an hour later, then tried to record our consumption (self-reported!) we’d usually stay at the hotel across the street from a steakhouse, so nobody had to drive, and some minor drinking to excess was undertaken. I don’t have them anymore, but on monday, when we all crawled in to work, Mark had personalized response-charts that measured the effect various substances had on each of us. It was interesting that being high did affect response times, but (predictably) nowhere near as bad as alcohol, which was linear for some of us and on a curve for others.

Whit Diffie: I’ve known Whit for a long time. We seem to perenially wind up sitting next to eachother at various dinners going back to the 1991 RSA conference in San Francisco. I was “that annoying kid that is doing firewalls that break stream encryption.” I don’t think I’ve ever had a conversation with him in any other context! It’s the life of a professional conference-goer. There was one memorable dinner at Higashi West in 199?6 where Whit and I were sitting together and Dan Farmer pulled out a truly fine bottle of vintage Port from the 1970s and started slamming it down like it was Coca-Cola. Diffie began pouring other people large amounts of the stuff, cautioning us to treat it with respect; I managed to rescue quite a bit but he rescued a whole lot of it.