The Russian military preference leans toward huge artillery-parks and massive suppressive fire, then the soldiers march in through the rubble. I was afraid that Mosul would turn into a field of “kill them all and let god sort them out.” It’s headed that direction: Mosul is under siege and the forces investing the city are destroying anyone who appears to be trying to leave except through checkpoints where they are being searched and disarmed.

In case anyone doesn’t understand what that means: “surrender or die” and running means you didn’t surrender. This is a tradition of sieges that goes back to the dawn of warfare with little change, though some besiegers like the Mongols had a policy that was “if anyone resists, everyone dies.” Mosul is a city, or was a city of about 2.5 million people – now down considerably – around 1/2 million. Why did they stay? Perhaps they did not want to become refugees living in a camp somewhere, perhaps they couldn’t flee, perhaps, perhaps, perhaps. It doesn’t really matter: they ought to have the right to stay, to live without being bombed because of decisions made by nationalists concerned about power, appearance, and posture. They aren’t pawns in some big game of chess, they’re people – but they’ve been placed between a bunch of gun-toting yahoos that they hate and another bunch of gun-toting yahoos that they hate. I doubt very much that national identity, the advantages of free-market capitalism, or what president has the biggest hands really means very much to them at all. I can’t imagine what it’s like to be a civilian in a city that has been turned into a shithole of rubble, and not to be so filled with anger and hatred that I’d reflexively support whichever side was trying to hurt the winner – on the basis that the “winner” was the meanest and most lethal bunch of gun-toting yahoos and I was going to be left having to deal with them. 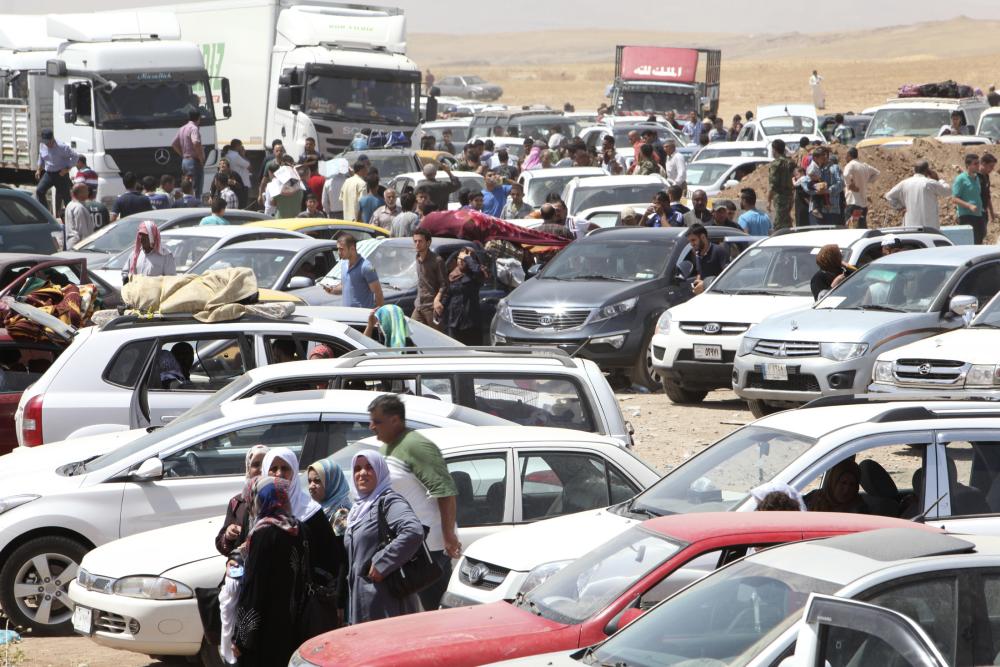 While London is reeling from the death of six people, and forty injured, that would be “a good day” in Mosul.

“Credible reports indicate that more than 231 civilians attempting to flee western Mosul have been killed since 26 May, including at least 204 over three days last week alone,” the U.N. human rights office said in a statement. [reuters]

What makes the situation worse for the civilians in Mosul is that ISIS will kill them if they try to leave, and the anti-ISIS alliance will kill them if they don’t show up, disarmed and clearly unthreatening, at a checkpoint. So, imagine what a civilian faces trying to decide they’re going to run for the checkpoint: they get shot in the back or in the front, but either way they get shot. It’s safer to stay in the city and hope the fighting swirls through some other part of the city.

The Russians haven’t been plastering the city with thermobaric rockets (though apparently they are using them in the Syrian countryside) but the Americans are using white phosphorus artillery shells.

The US fig-leaf is that it’s Iraqi government troops that are calling in the artillery, so it’s not Americans firing area-effect pyrophorics into a city. Never mind that the guns that are firing the shells are American, it’s American hands loading the guns, and the shells were made in America, and paid for by the US Taxpayers. As you can see from the pictures, white phosphorus shells burst above the target and scatter ferociously burning chunks of metal in a blast-cone underneath. Anything that can burn, does, when it gets white phosphorus on it. You can’t put it out – a veteran friend once told me that the only thing you can do is dig it out with a knife, if it gets on you, because the fat in your meat will ignite and you’ll burn like a candle. The US has decided that white phosphorus is acceptable for military use because it’s not exactly a “chemical munition” and it’s just artillery. Similarly, the US has decided that depleted uranium is acceptable for military use because it’s not being employed because it’s toxic, it’s being employed because it makes good ammunition.

COL. DORRIAN:  Well, I’ll start with the white phosphorous one.  Those are being used in accordance with our rules, they’re being used in accordance with the laws of armed conflict and we always attempt to do the very best that we can to use any of our weapons, be they white phosphorous or any other, in a manner that has a minimal or as little as possible impact on civilians.  So, what you’ve cited there is some allegation, I’m not aware of any allegations against U.S. forces for their use of white phosphorous at all. [us dod]

Here’s a key to decoding that: “I’m not aware of any allegations against…” means that Col. Dorrian deliberately lives under a rock, like a proper DoD spokesperson, so he’s not aware and thus he can say that. Oh, did I mention that Dorrian was giving his briefing at Baghram AFB in Afghanistan, and not anywhere near where he might be aware of what is going on in Syria? The bit about the weapons being used in accordance with our rules – that’s the same argument that the CIA torturers used (and continue to use) – the rules they were following were the ones that were rewritten to be ‘legal’ because that’s what it says in the rules.  Does anyone doubt for a second that it would be extremely against the rules if that flaming metal was igniting rooftops in Baltimore, Maryland? Or Seattle? Meanwhile, take a look at those cones of flaming shit falling into a city: that’s what “precision bombing” looks like. I’m sure that the DOD would first say it was a smoke barrage requested by the Iraqis, and – if that didn’t end discussion – it was Iraqi spotters that called the fire and we were just following orders.

Of course, there have been attempts to regulate the use of such weapons. There are Geneva protocols against incendiary weapons, which the US is signatory to. But the US did something sneaky: it included a “signing statement:”

Upon Consent to be bound by Protocol III
Reservation:
“The United States of America, with reference to Article 2, paragraphs 2 and 3, reserves the right to use incendiary weapons against military objectives located in concentrations of civilians where it is judged that such use would cause fewer casualties and/or less collateral damage than alternative weapons, but in so doing will take all feasible precautions with a view to limiting the incendiary effects to the military objective and to avoiding, and in any event to minimizing, incidental loss of civilian life, injury to civilians and damage to civilian objects.”
Understanding:
“It is the understanding of the United States of America that any decision by any military commander, military personnel, or any other person responsible for planning, authorizing or executing military action shall only be judged on the basis of that person’s assessment of the information reasonably available to the person at the time the person planned, authorized, or executed the action under review, and shall not be judged on the basis of information that comes to light after the action under review was taken.” [untc]

Shorter US: “This does not apply to the US.”

Meanwhile, I admire the many other nations that also included signing statements, such as Ireland:

It’s instructive to read through the list of comments. Israel waffles, the UK waffles, China semi-waffles. All the civilized countries that included a signing statement, include something like Ireland’s, i.e: “we don’t agree with you.” Remember this when you see someone like Col. Dorrian, who says that weapons are being used in accordance with our rules – because our rules are “there are no rules.”

I am so sick of talking about war crimes. It’s all a crime. Imagine if ISIS wrote a “signing statement” that driving cars into crowds and slashing people with knives is acceptable because blah blah blah..  Think that’d wash with the British? Think the families of the victims would say, “oh, that’s all right, then”?

It seems that the best that humanity can do is “it could be worse.”

This is the kind of news we’re going to keep getting: [dod] “Many of these watercraft were being used to ferry ISIL fighters and equipment across the Tigris River from East to West Mosul in an attempt to escape the Iraqi Security Forces as they continued to clear the remaining portions of East Mosul.”  It’s our pal Dorrian again.

There won’t be parades with happy locals scattering rose-petals under the tank treads. Those celebrations only happen at the conqueror’s safe capital cities, far away from the bleeding and the smoke and the dust of powdered concrete. There will be a lot of picking up, digging out, starting over, and trying to figure out what happened to friends and family and what’s left of life that can be reassembled. It is always thus. Does anyone harbor realistic fantasies that a unified Iraq with a democratic government is going to emerge from this mess that the Bush administration created?

When you hear American politicians talk about “no boots on the ground” and “precision strikes” and “supporting local forces” it’s all propaganda and lies.

PS – if some media talking head starts rambling on about the beauty of our weapons, please just punch them for me. It’s OK, when I consented to US law, I signed a statement that says I’m allowed to deploy or designate the deployment of fists when I deem it’s necessary.