I was struck speechless to read that the Iraqi army has brought its handful of TOS-1 “Buratino” thermobaric rocket launchers into the field at Mosul.

(The Sun’s article) The Buratino is a weapons system I first encountered playing Steel Panthers World at War, when my usual opponent, “fose083” caused an entire wing of my force to disappear into thin air – I logged in to play my turn and my troops were … gone. 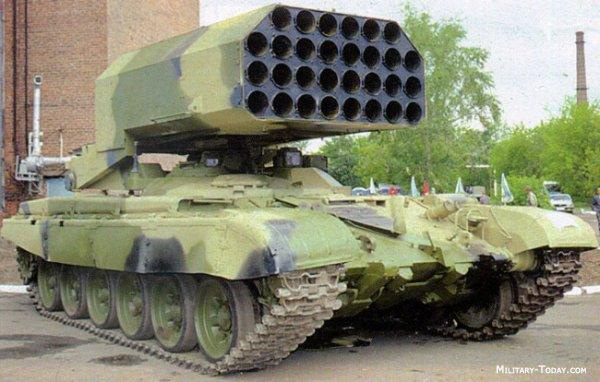 The TOS-1 is is a terror weapon, an area weapon, a blunt instrument. And it sounds like the Iraqi army is going to be deploying them against a city full of civilians. The Russians used them to obliterate the city of Grozny, in 1999. If you look at the pictures of Grozny during the battle, it’s reminiscent of Aleppo, or Hanoi after a B-52 strike.

A vintage T-72 chassis supports a rocket-launcher cluster of 220mm rockets that fire fuel/air explosives. When the whole cluster is launched and detonated, everything in a 300 x 400 meter area is destroyed. It doesn’t matter if you’re in cover or whatever – fuel/air explosives create a tremendous pressure-wave that instantly kills anything that has lungs. The Iraqis obtained a half-dozen TOS-1 shortly after the US “pulled out” of Iraq; they’ve been getting weapons from everywhere. I’m really surprised Israel didn’t step in and make sure Iraq didn’t have anything like these; they must be watching them very closely.

This is emblematic of the utter shambles that US foreign policy in the middle east has become: US special forces (barefoot, so as not to put “boots on the ground”) are marching in an attack on a city of between 1/2 million and 1.5 million people (including a relatively tiny number of ISIS!) alongside of cold war terror weapons originally designed to eradicate them; area weapons that obliterate 2 by 3 city blocks at a time – hardly the kind of precision that the proponents of modern warfare like to lie about achieving.

The TOS-1 is not a scalpel, it’s a sledgehammer. Fielding them against Mosul, like Grozny, is punishing the civilians of the city for not resisting ISIS – basically, it’s the same insane logic totalitarian warriors have always used: if you’re not for us, you’re against us and if you didn’t resist the enemy to the death, you must be on their side, so we’re going to kill you. Either way, in other words, the civilians get killed: because ISIS would kill them if they resisted, and now the Iraqi army with its US “trainers” and “assistants” is going to give them the other side of the coin. Heads you lose, tails you lose.

By the way, the US government has been promoting the lie that “no boots on the ground” means, you know, special forces advisors and trainers and some intelligence assets and maybe drones and an occasional airstrike. That’s a lie. There are several US-owned, US-crewed batteries of 150mm artillery – Paladin self-propelled guns and howitzers. When the US starts building “fire bases” with all the logistics they entail, that means we are active participants in the war.

Also: Mosul is largely Sunni. The Iraqi government is largely Shia. Looks like some ethnic cleansing’s about to happen.