The unpredictable flounderings of the United States have opened some opportunities for other leaders who want to make a move. One that I predicted “eventually” appears to be starting “real soon now.”

I doubt Turkey is ‘concerned’ as much as frantic – they’ve recently seen their tank forces brutally munched by anti-Syrian-government insurgents using Russian-made ATGMs, now they’re expecting the US will be arming the Kurds to the point where they’ll represent a credible national army. Which is about right. And, the next step after that will be calls for an independent Kurdistan. That won’t be for a while, but the lines that the British and French drew on the map when they carved up the Ottoman Empire: they’re written in crayon.

In a functioning US government, all this would have been vetted through the Secretary of State, but instead the Kurds probably told Jared, “We asked Ivanka and she said it was OK” and Jared said “I’ll let dad know.”

Officials in Iraq’s autonomous Kurdish region have announced that the northern territory will hold an independence referendum on September 25.

Masoud Barzani, the president of the Iraqi Kurdish Regional Government (KRG), announced the vote on Twitter on Wednesday. [al jazeera]

Of course, international diplomacy is what Twitter is for. 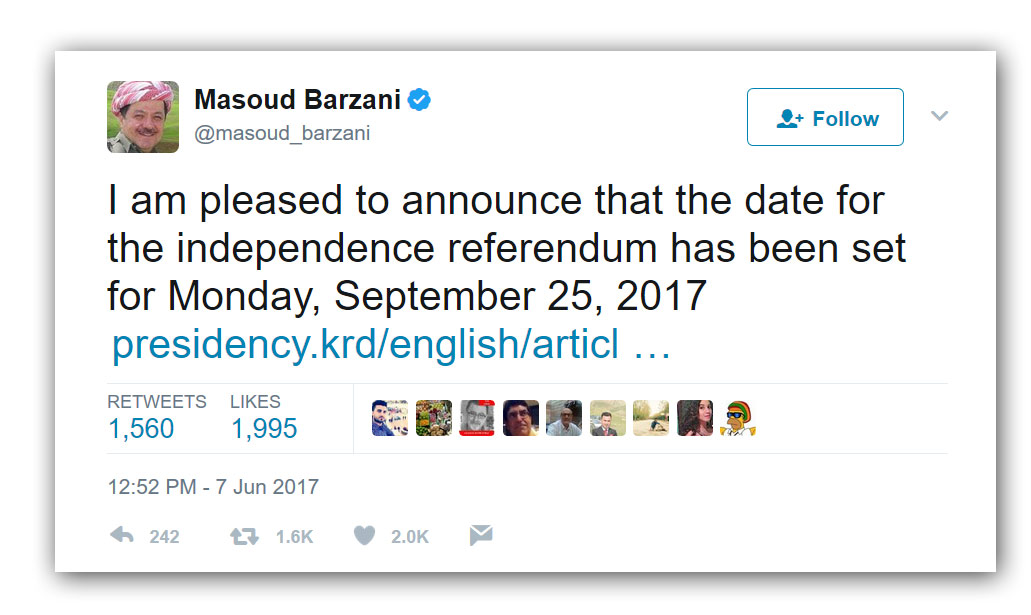 There are various interpretations of whether the Kurds are serious, or whether it’s just a maneuver to extract concessions from the Iraqi government, or what. I didn’t manage to find a comment from Turkey’s Erdogan but if I did, it would probably be unprintable anyway. Presumably, this is part of the pay for letting the US build secret bases in what will be independent Kurdistan, and for helping take Mosul back from ISIS. The Kurds have already positioned military and dug in in northeast Syria, so the question will be how much land the independent Kurdistan will claim, whether it includes Mosul, and whether anyone will do anything to stop them.

By the way, in case any of you missed it, Turkey’s bid to join the EU has been indefinitely and quietly shelved [nyt] – that’s probably at least partially why Erdogan has been more overtly assuming a dictator’s role: he no longer has any reason to pretend. If Turkey responds by making a grab at northeastern Syria President Trump will have a dicy diplomatic situation on his little hands – which means he’ll probably have Jared take care of it while he plays a couple more rounds of golf.

So that may be a partial answer to the US’ “regime change” ‘strategy’ for Syria: fragment it (and Iraq) into smaller satrapies. It’s a ‘strategy’ that worked fantastically in Korea and Germany.

I see nationalism as generally bullshit, but I realize people take it seriously. I am happy for the Kurds that they are finally going to get their homeland back, after having been stomped by the Ottomans back in the 16th century. If there’s any value to nationalism, it’s when a region’s people have had their self-determination taken away by a superior power – so I guess I generally favor more self-determination, which means if we’ve got to have nations, they should be small and non-aggressive.

Anyone want to bet against the proposition that the US will funnel Kurdistan a great deal of money for massive military bases there?