If you’re going to make one of my soap recipes, this is the one. It’s easy, too. Would I lie about something like this?

I am pretty sure that this would sell amazingly well if someone wanted to whip out batches and sell at craft fairs. In fact, one daydream I had would be to make “weed brownie soap” – make this stuff in a tray with some skunky weed in it for scent and just rub it all over all the things.

I’m not going to post this as a full walk-through for soap-making, if you want that, go look up my other postings on soap, and get geared. It’s not hard. [stderr][stderr][stderr] 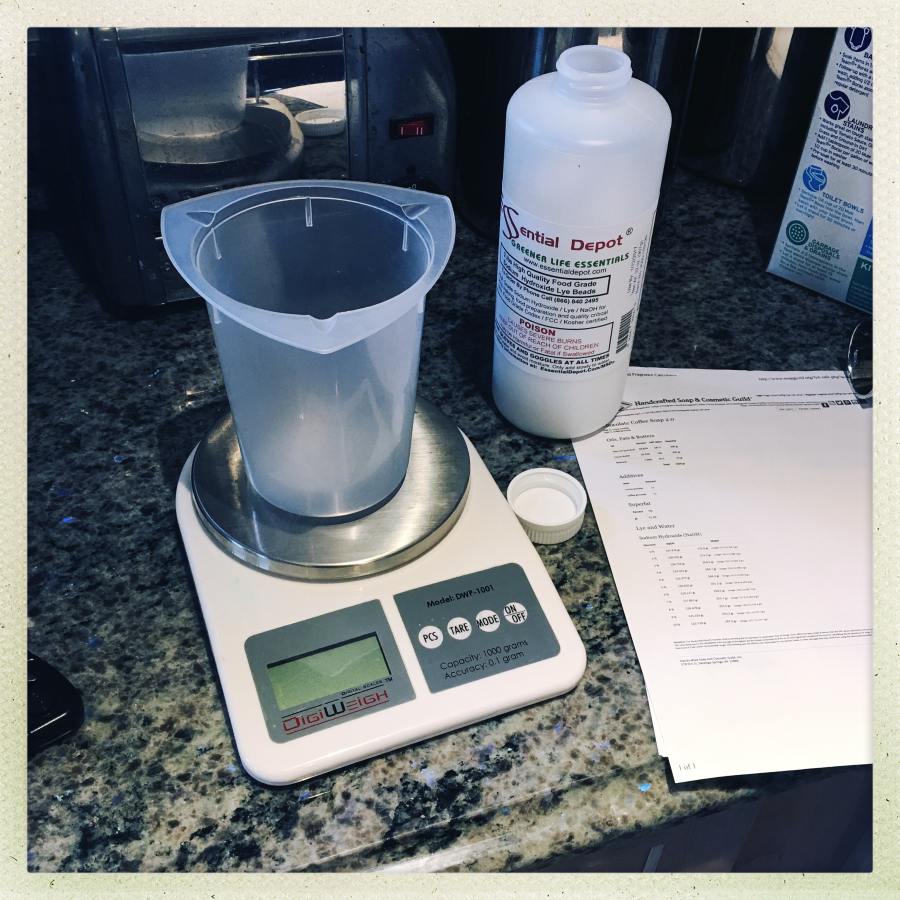 First step is measuring the lye and water. Use a soap calculator like the the Soap Guild’s Calculator [sg]

And you’ll want 1 cup of ground coffee. Because I like a bit of exfoliating effect I use medium grind – don’t use coffee you’ve already brewed with: you’re going to want it to give scent and texture to your soap (and the acids in the coffee and the bases in the soap will neutralize eachother very nicely over time)

You can get all the oils and butters on Ebay, though if you’re planning on going full production and saving money then buy your stuff from the Essentials Depot. [ed] 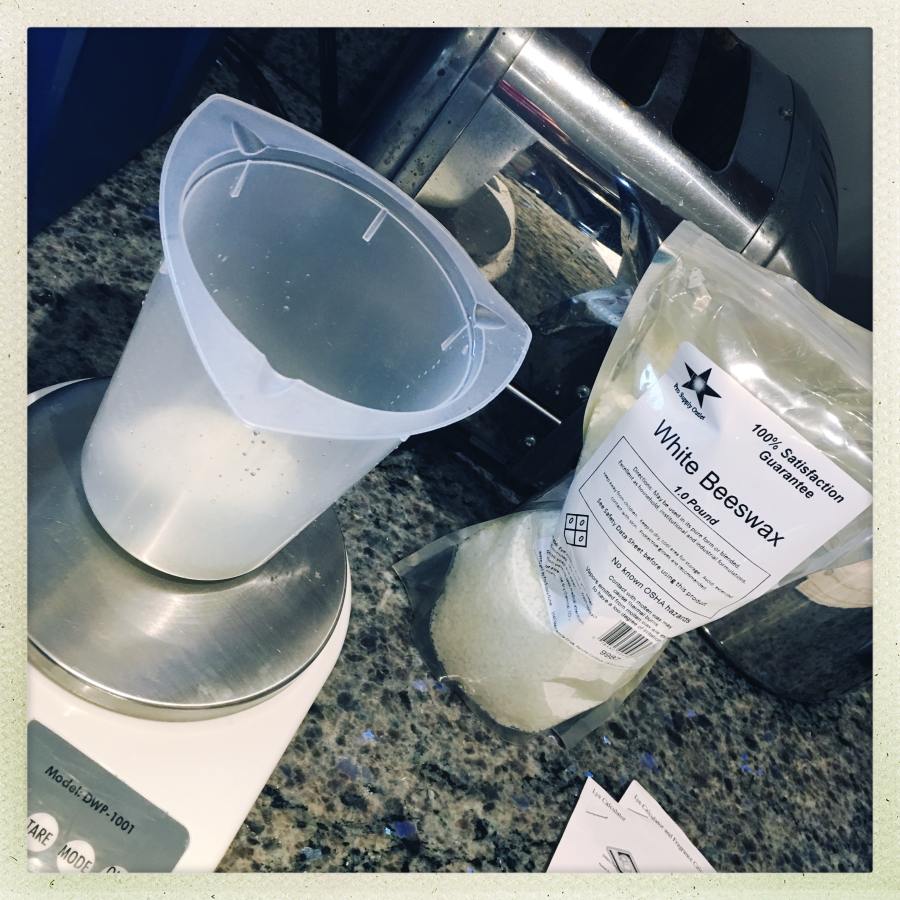 I measure the beeswax and the cocoa butter out, then put them in a pyrex pourer and pop them in the microwave for a couple of short pulses until they melt. Depending on your cocoa butter you may need to filter the whole melted thing through some cheesecloth or a paper towel (I’ve had a few batches of cocoa butter that come complete with bugs – that’s how all-natural they are!) 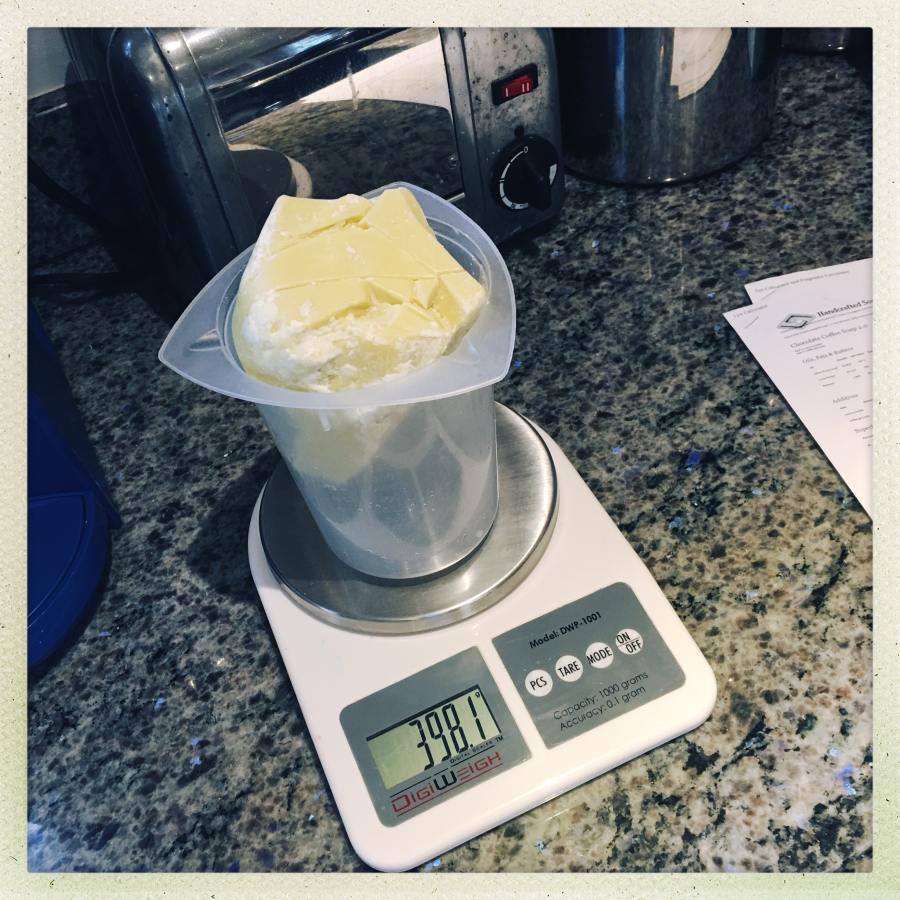 A decent digital scale like the $30 DigiWeigh (available on amazon) is worth its weight in measurement. 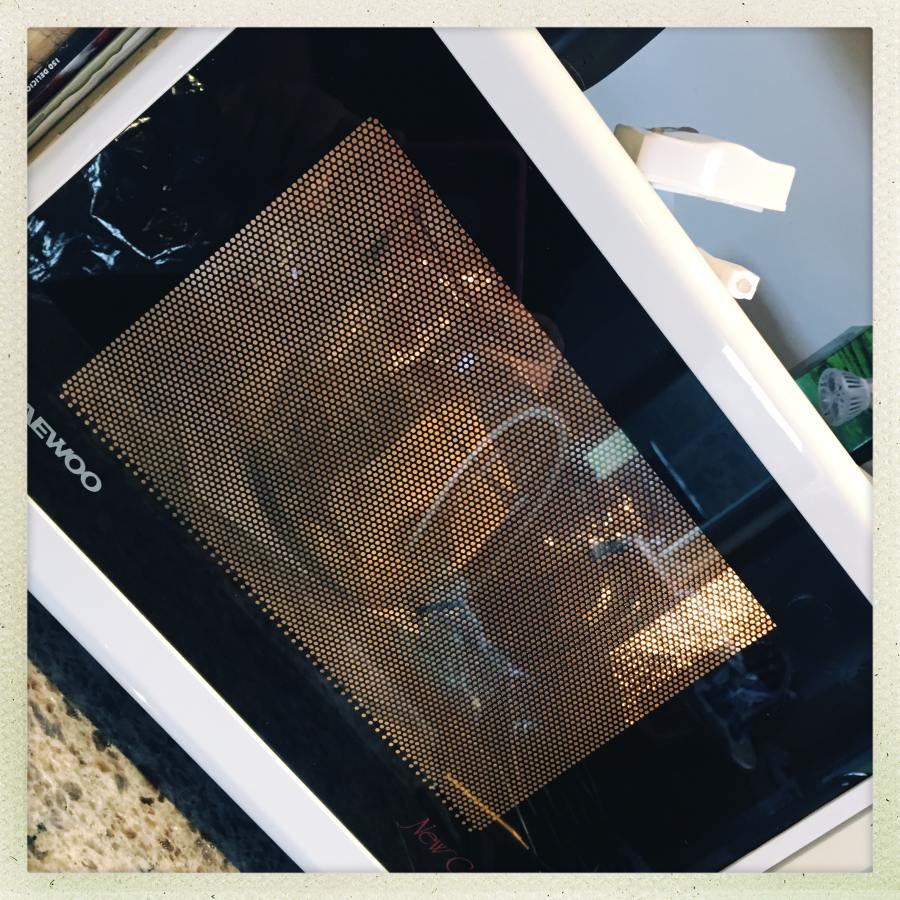 You do not want to get your cocoa butter and beeswax super hot. Let it start to melt then stir it periodically as it continues to melt. While it’s doing that, mix your lye and water and give it a chance to cool.

The lye/water ratio is flexible; mostly your mission is not to put too much lye in. Avoid that and everything else is fine. 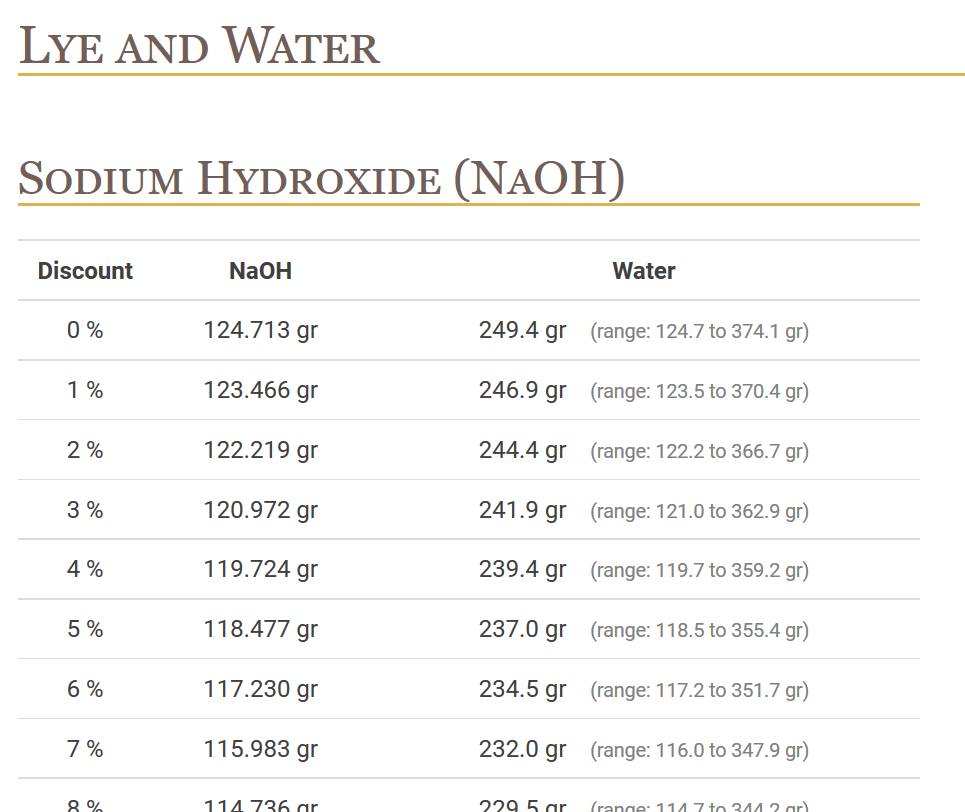 The lye calculator will give you a bunch of ranges. The “discount” is a way of making sure that there’s less lye in the soap, which means it’ll be fattier and creamier. There are 2 ways to do this: use more oil, or use less lye. I usually use more oil – when I measure the cocoa butter and other oils out, I don’t care if I put more in. So it may be I use 420g of oil. It’ll be fine. The main thing you need to avoid doing is getting too much lye in. I have made one batch where I inverted the lye and the water: I made the soap with twice as much lye as water. That was a ruined batch.

Mix the lye and water, holding it so the cup is not angled toward your face, using a stainless steel or silicone spoon. Then put it somewhere safe where it won’t get knocked over. If you’re cautious about the lye, you may want to have a bottle of cider vinegar handy to neutralize it if you spill any. Lye is not as dangerous as it was portrayed to be in Fight Club – if you pour dissolved lye on your hands they’ll get slippery and you’ll lose a bunch of dead skin and that’s about it.. unless you have a cut on your hand. You’ll feel that. I work with stuff that is vastly, ridiculously, more dangerous than lye so I admit I am pretty casual about the stuff.

I usually put the lye in a pan of cool water to bring the temperature down. Lye gets quite hot when it dissolves, and the heat can cause the oils to boil into what’s called a “soap volcano” – you don’t want those. Take your time – the longer you take at this point, the cooler everything will get and you want it all to be lukewarm or cooler than lukewarm. 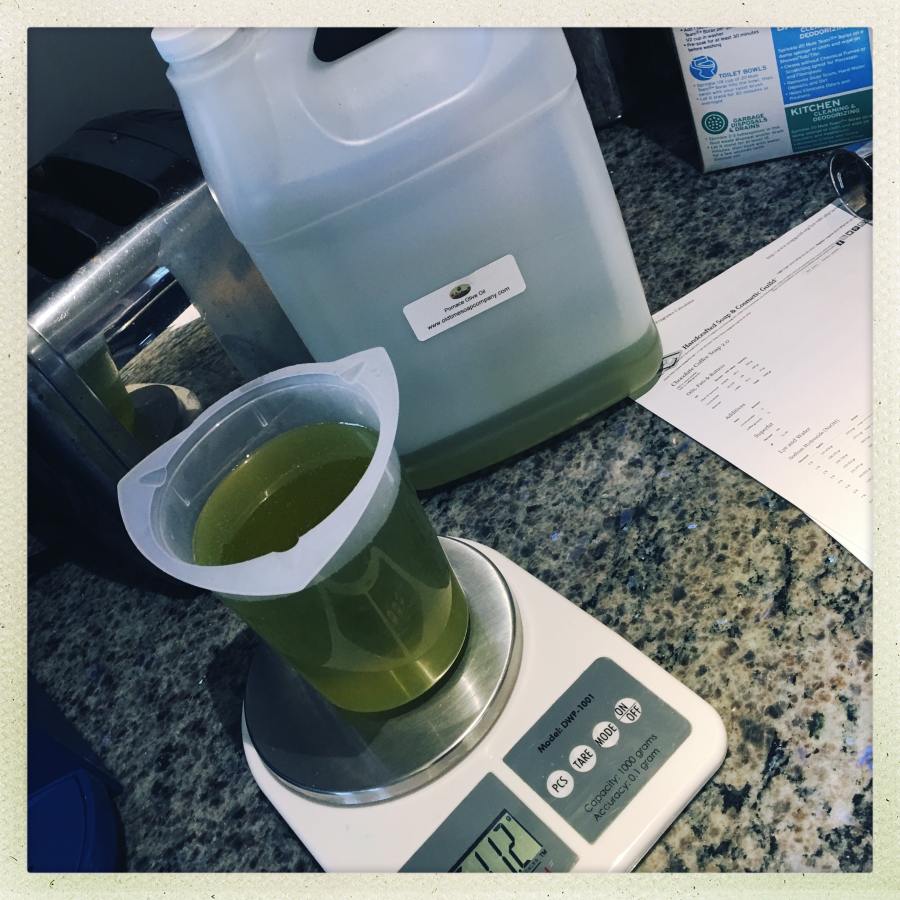 Measure out the olive oil, and add that in with the melted cocoa butter and beeswax. That should bring the temperature of the oils down a bit. Don’t let it congeal, though. 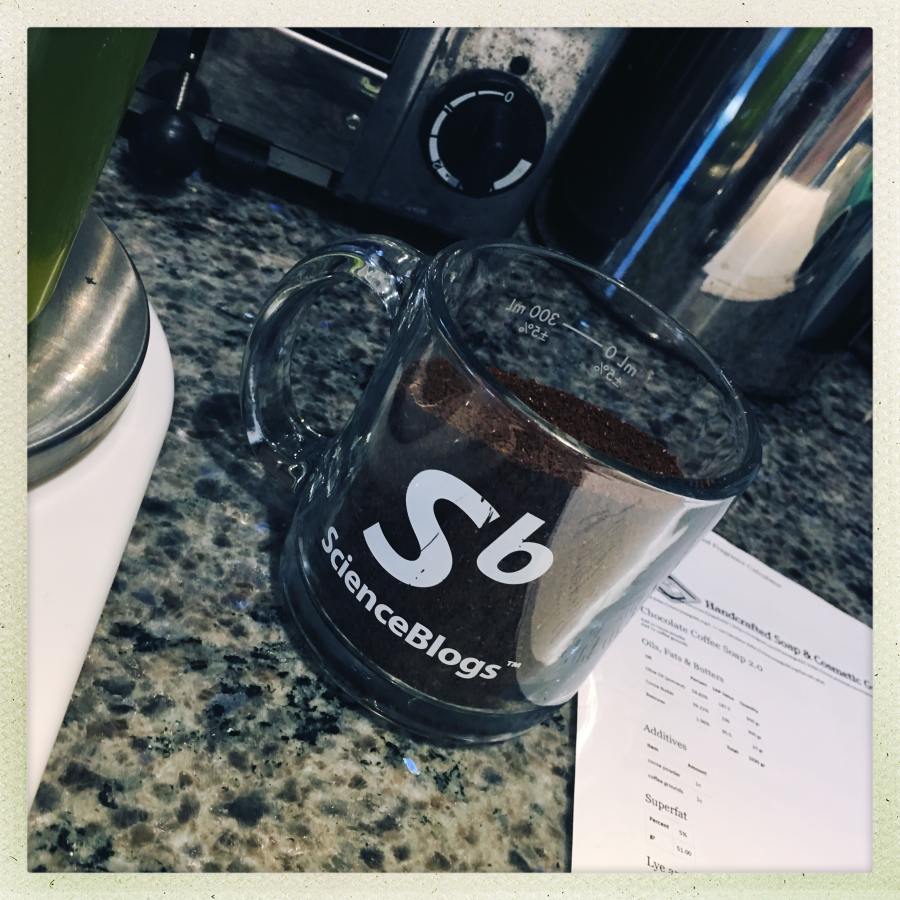 Now is a good time to grind your coffee and have it ready! 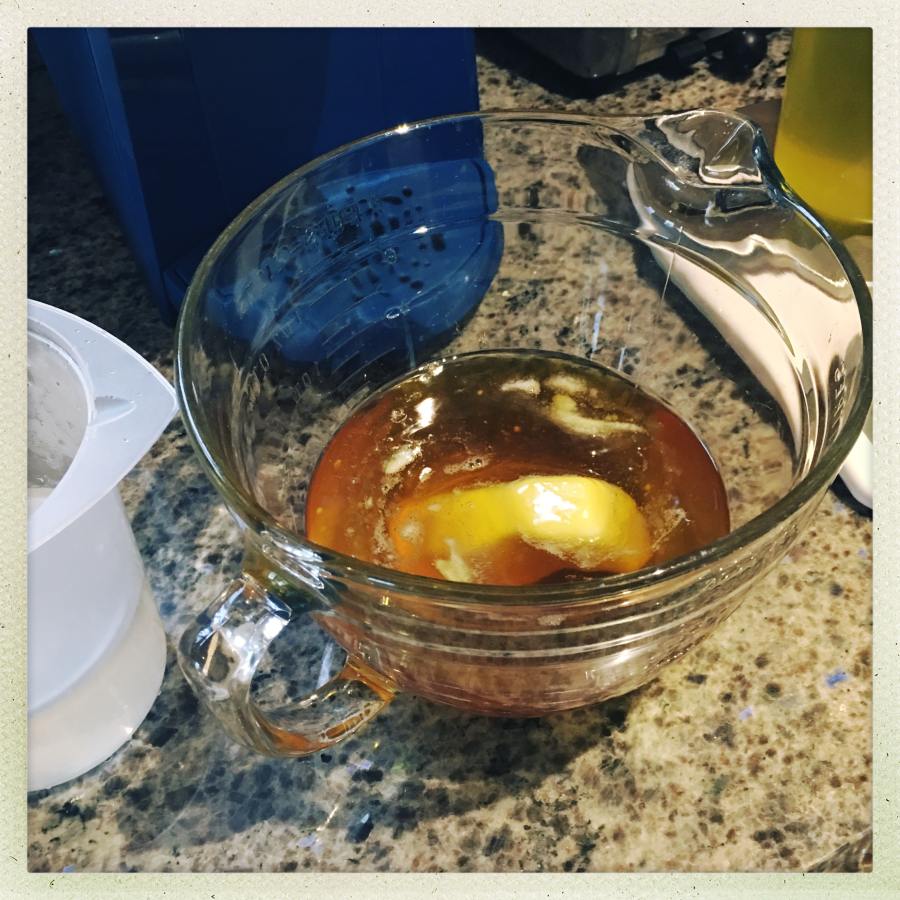 Hot partially-melted cocoa butter will continue to melt under its own heat while you prepare other things. 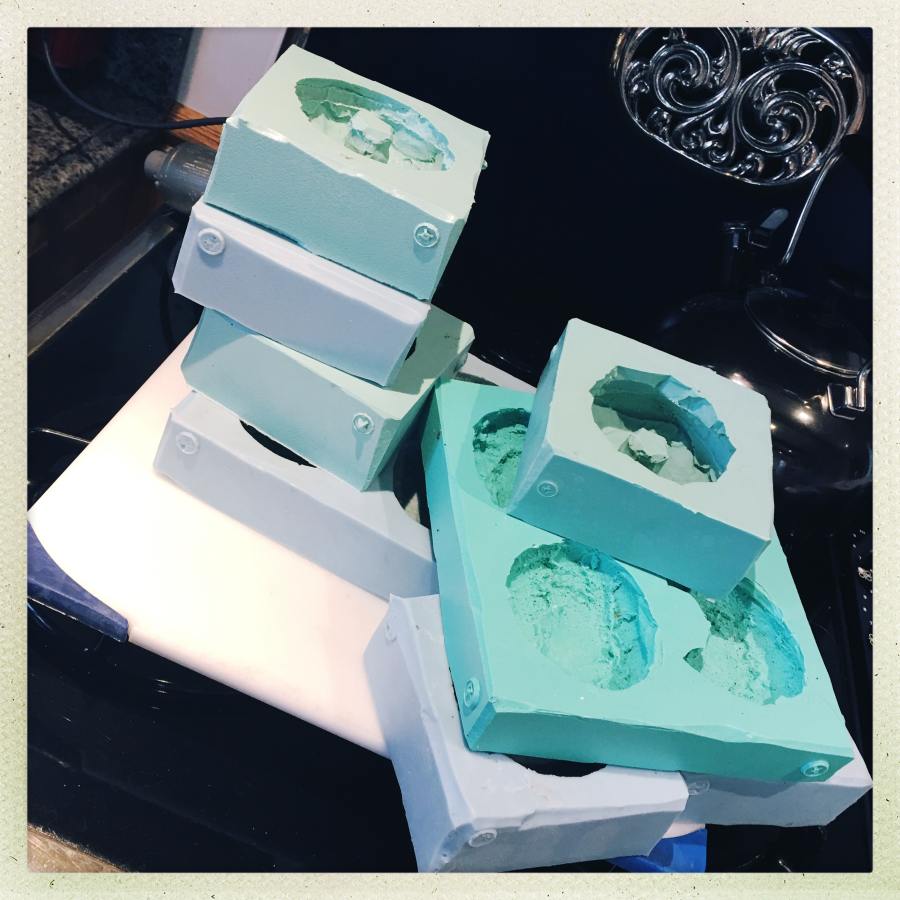 Get your molds ready!  These are my preferred molds for making this soap. I made them using the ancient “lost cookie process” and “lost donut process” – you hot glue a cookie to a cardboard sheet then pour silicone mold material over it, then – when it’s cured – scoop the cookie out with your fingers and wash the remaining cookie-bits out with hot water. It makes a great mold.

One thing to be careful about with any recipes involving chocolate or coffee or cocoa butter: chocolate contains vanillin which stains brown in lye. So if you use these molds for white soap, you’ve got to really really really clean them well – lots of soap and hot water.

Usually when I make this soap, I make soap frosting – a small batch of a thin version of soap with yellow dye and titanium powder, that I pour into the donut molds to fill the areas where the frosting is. I let that cure 5 or 6 days then make the cocoa soap and do another pour. This time I was being lazy: I had a trip coming up and wanted to get the soap curing before I left.

If you don’t have a lot of cool molds to use, just get a silicone baking tray for brownies and pour the soap right into that, then cut it up into squares with a sharp knife, just like brownies. It makes a great guest soap! 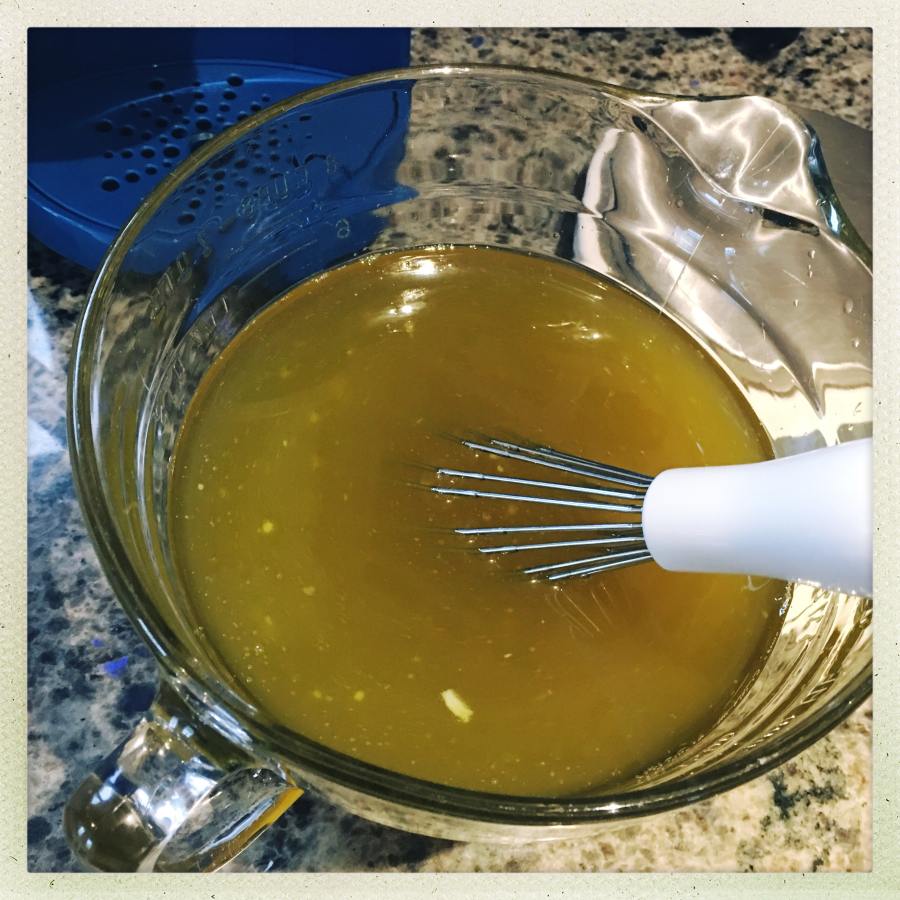 All the oils, mixed. The molds are laid out, the lye is cool, we’re almost ready to go! 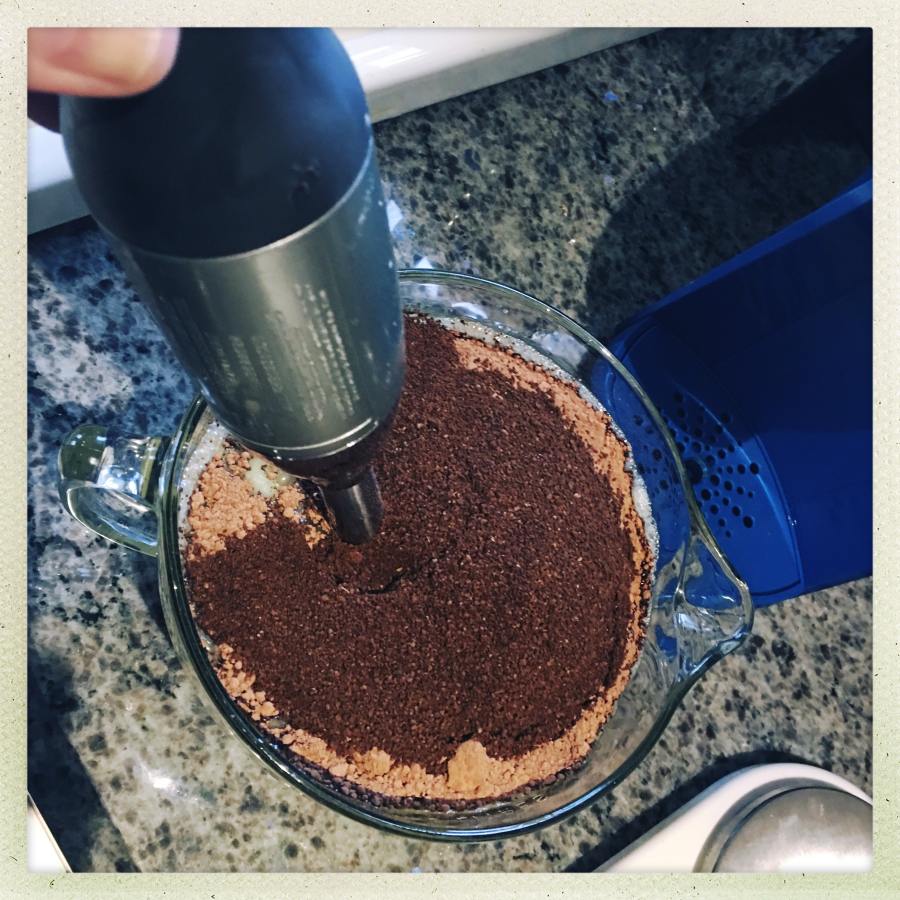 Next, a bunch of stuff happened that I didn’t illustrate because my hands were too full to hold my iPhone and snap pictures.

First, I added the lye to the oils and mixed them briefly with a stick blender. I normally don’t use the stick blender except to mix the oils – and for this recipe I sometimes add a spoonful of titanium dioxide to the oils to make them a bit brighter. I stick blend all that, then add the lye, and stick blend the cocoa and coffee in really briefly – for a few seconds – then switch to a whisk. If you blend your oil/lye too fast with a stick blender it can saponify very quickly – the dreaded “soap seize” – you wind up with a block of gunk that you can’t pour. If that happens: next time, don’t mix so fast and use more water in the lye mix.

So the picture above is what it looks like right before I switch to whisking. 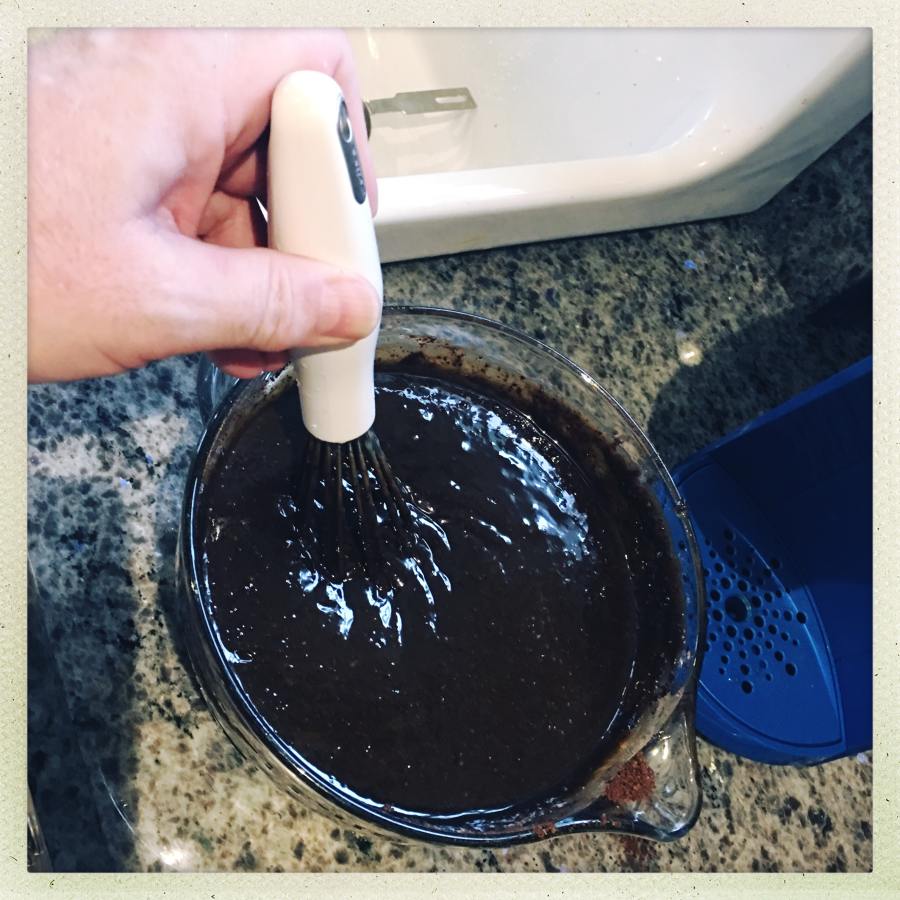 Looks good enough to eat, doesn’t it!?!?!   It’s not. It smells incredible, and it’ll feel great.

Sometimes (again, I forgot to take a picture) I’ll add 4 or 5 drops of ‘cocoa absolute’ that’s pure natural chocolate scent distilled out of the left over husks of cocoa beans. It smells amazing and makes the soap smell even chocolatier. It’s not strictly necessary.

I don’t have pictures of what the molds look like when I put them up to dry (my hands were kind of busy and messy and I don’t want to get my phone full of gooey chocolate soap) but all that was left to do was pour that into the molds, spatula off the tops if the molds needed to be even, and then I put them in the oven to keep the mice away from them. I leave the door slightly ajar at the top so the light in the oven circulates the air – it’s an inadvertently perfect soap drier.

I’ll post some pictures when I demold them. I’m in San Francisco right now and I’ll be home in a couple days and we’ll see what they look like!

Now that that’s all done, I suddenly realized I need a chocolate easter bunny soap mold. Dang it, I missed a trick! Maybe next year for easter I can make some pink soap eggs and chocolate soap bunnies and maybe an adorable little cthulhu bunny. One of the things that’s very frustrating about this stuff is: I can’t sculpt to save my life, so I’m pretty much stuck with making mold masters in my shop out of found objects (no, I will not make a soap urinal) and working from them. If you’re interested in some of the mold-making process, I’ve done a walkthrough here: [stderr]

I am going to probably have a fair amount of Fight Club soap and Chocolate fudge soap available in the next couple weeks. If you think you’d like some, email me an address and I’ll send some along!  If you don’t get a reply from me, you can post a comment here; I have pretty aggressive spam filters on my email box.