Hot weather is a good time for soap-making. It makes it easy to mix the oils: leave your shea butter and coconut oil on the porch in the sun and they are liquid in 10 minutes. Molds dry quickly in the heat, and the soap doesn’t have any problem gelling – in the winter I have to leave it in the oven overnight (risking a soap volcano!)  Summer soap just sits on the counter overnight and it’s ready to go in the morning. 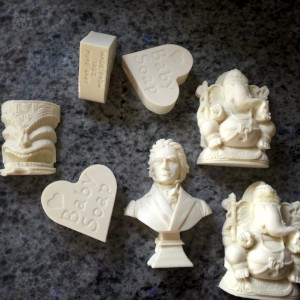 A few years ago I started making soap because I was learning mold-making in silicone and urethane and I thought “Now a FIGHT CLUB soap would be a thing”   I know a guy with a CNC machine and I had him make me a master out of delrin, which I used to make silicone molds, and – off I went!

It was so fun that one day I had the idea of entering “resin sculpture” on ebay and I discovered the joy of remixing other people’s castings into soap molds. I sanded Ganesh’s back down and he made a great mold. The Tiki is an aquarium ornament I filled with clay and siliconed. Beethoven was bonded marble but the bandsaw bisected him beautifully. Beethoven was followed by Mozart, Mao, Caesar and Epicurus.

I think my favorite molds aren’t pictured here: my Soviet-era Lenin mold, and my hippie-era John Lennon mold. Lemon Lenin Lennon soap FTW!  (I also have a great Trotsky mold: rub a fascist on your butt!)

I never could get my pope on a rope soap to work because the statue I had of JP2 has its arm out. For soap molds you need a large surface area for moisture to evaporate out of – you can’t do a 2-part mold. Unfortunately. I made some 2-part molds for “fancy ass soap” (a piece of wood with nails and screws and a label hammered onto it in steel) and they didn’t work – I had 2-piece slime collectors. I need to make a one piece mold from them come to think of it…

The Baby Soap (“Made from 100% pure baby”) was my design, beautifully executed by my friend’s CNC skills. We co-designed some Bates Motel guest soap bars, which I usually cast with a deep red gel in them so they make red runoff in the shower…

This batch is my “Great White”* recipe, coconut oil, cocoa butter, shea butter, and castor oil, scented with Lemon Balm (thanks Caine!) and Lemongrass and Lemon Verbena. It smells much lemonier than lemon, and doesn’t have citrus oil’s tendency to damage your skin.

It’s not too hard to talk me into throwing some soap in a box and shipping you some if you want. But first you have to review and sign my attorney’s safety waiver and promise not to eat any of the soap. If you’ve ever smelled my fudge coffee soap you’ll know that’s actually a danger.

(* Named after the shark, NOT the Donald. And it’s white. And great. I named the recipe 3 years ago…)

Email Security 101 » « Monday Meslier: 205 – We Could Not Repeat Too Often How Extravagant and Fatal Religion Is