Making liquid soap is daunting because it’s a weird process. But it’s also pretty simple. In fact, the full description of the process takes longer to read and understand than actually doing the work.

I’ve produced this as a single recipe with quantities for a member of The Commentariat(tm) who wants to give it a try. So where I put specific quantities, you can use them and make exactly what I did, or there are links at the bottom for how to compute your own quantities based on different oils.

This process takes about 4 hours start to finish, but you’ll only actually do a little work. But you have to be there to deal with it; you can’t just leave your soap on the stove like you would a cat or a child or something…

So, the first step is to break out your scale, a container for measuring the oils (use something that won’t go over your scale’s limit), a stirrer spoon, a big-ass pot, your oils, your potash.

If you’re paranoid, you can have a bottle of vinegar handy in case you manage to get potash in your eyes, but it’s better not to do that. This process is fairly safe: the worst thing that you can do is have a soap boil-over on your stove and that’s an ungodly mess to clean up. Keep your temperatures low; it’ll take longer but you’ll have less clean up! 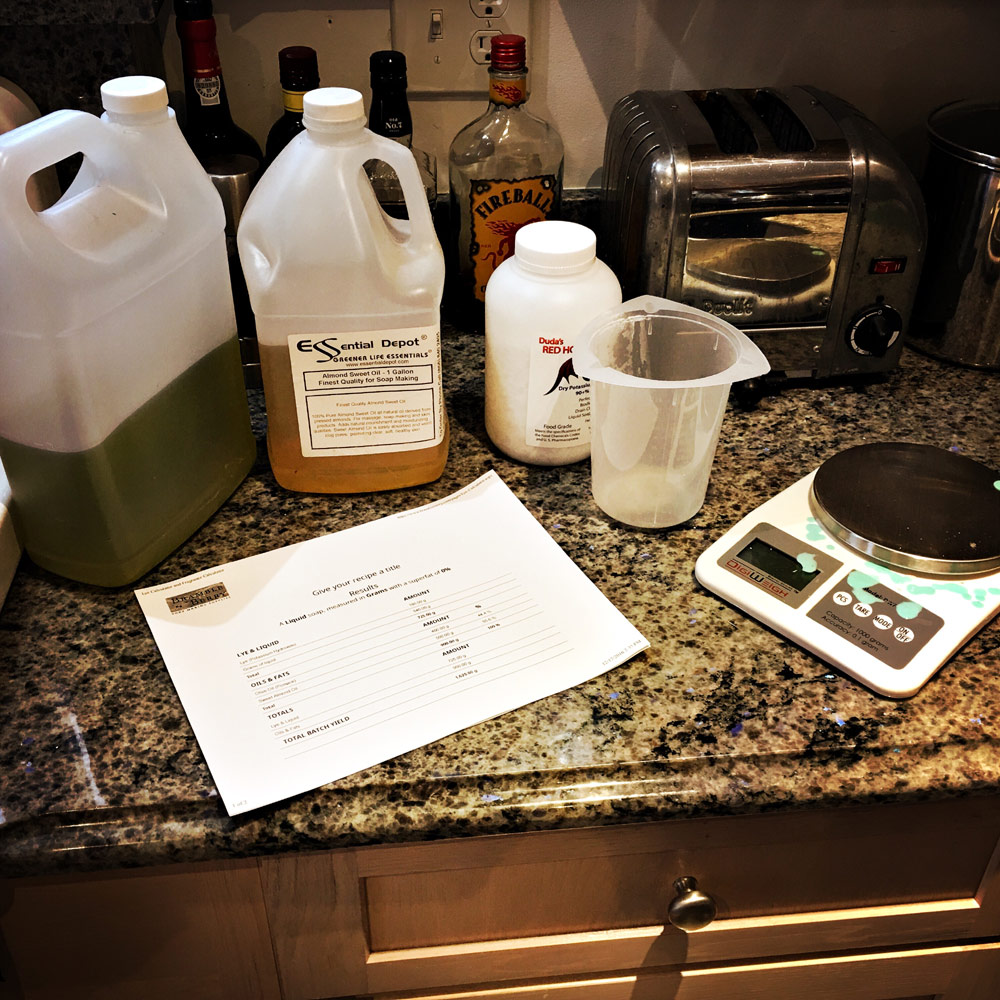 For some reason the LED lights in my kitchen make my hemp oil look very green!! (I actually pictured different oils here than I have in the recipe. That’s because someone forgot to take a picture of the right oils) 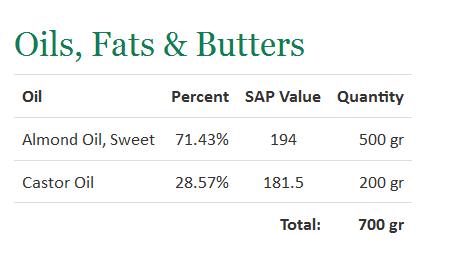 Step 1: Measure the oils. Set the scale for grams and pour 500g of almond oil, then hit “Tare” on the scale and add 200g of castor oil. 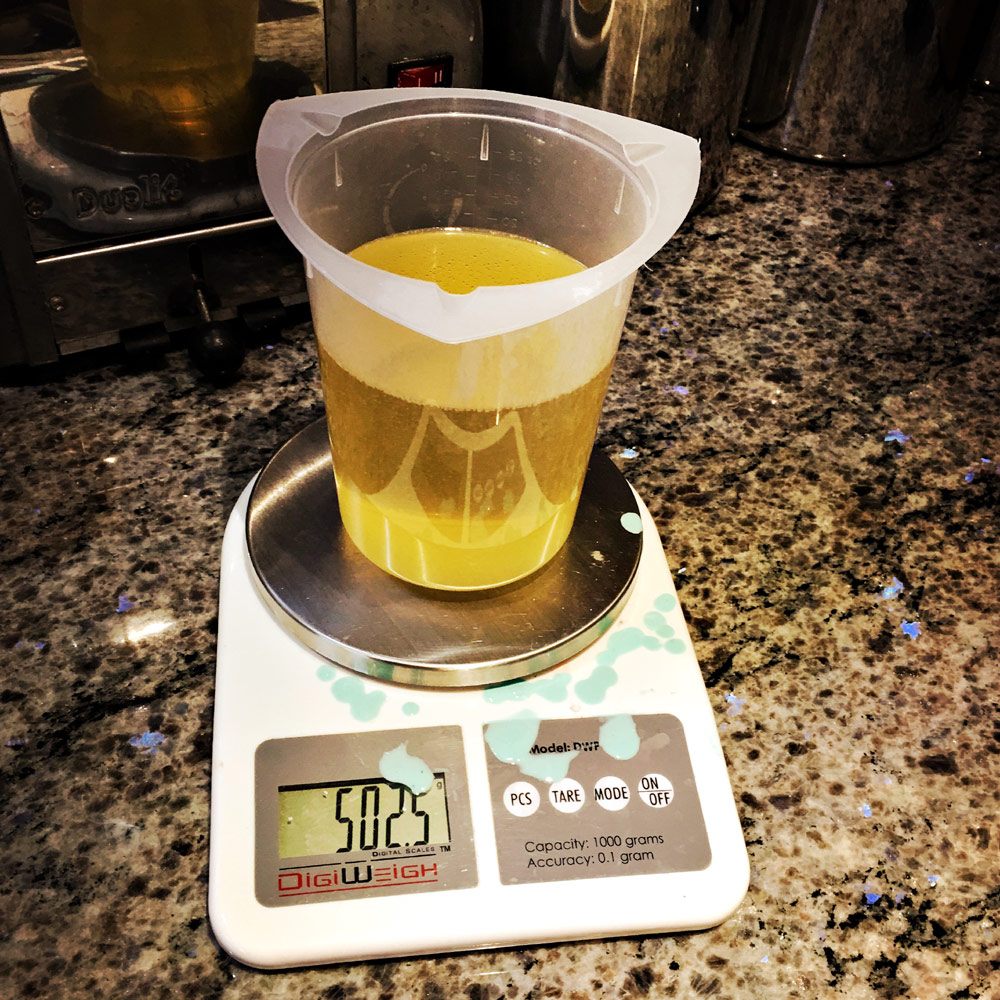 Don’t worry if you go a bit over; it just means that there’s a slight chance all the oils won’t saponify, but it also means you’re less likely to have the soap come out more caustic. In soap-maker-ese this is referred to as “superfatting” – putting more oil in than you need. Some soap-makers go as much as 5% superfat. I just pour sloppily. 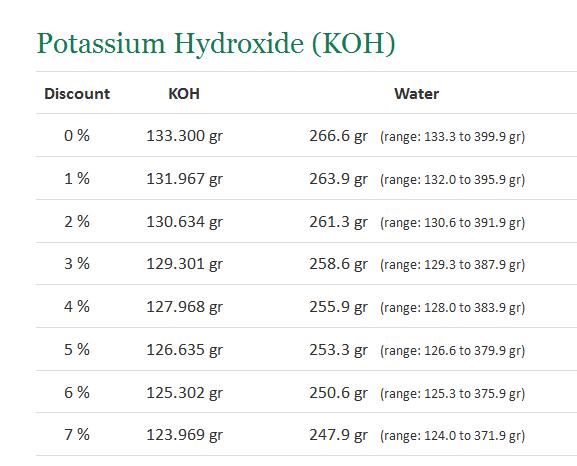 The “range:…” shows there’s a lot of latitude in the water. A good rule of thumb is: at least 267 grams of water and nevermind if you’re a bit over. 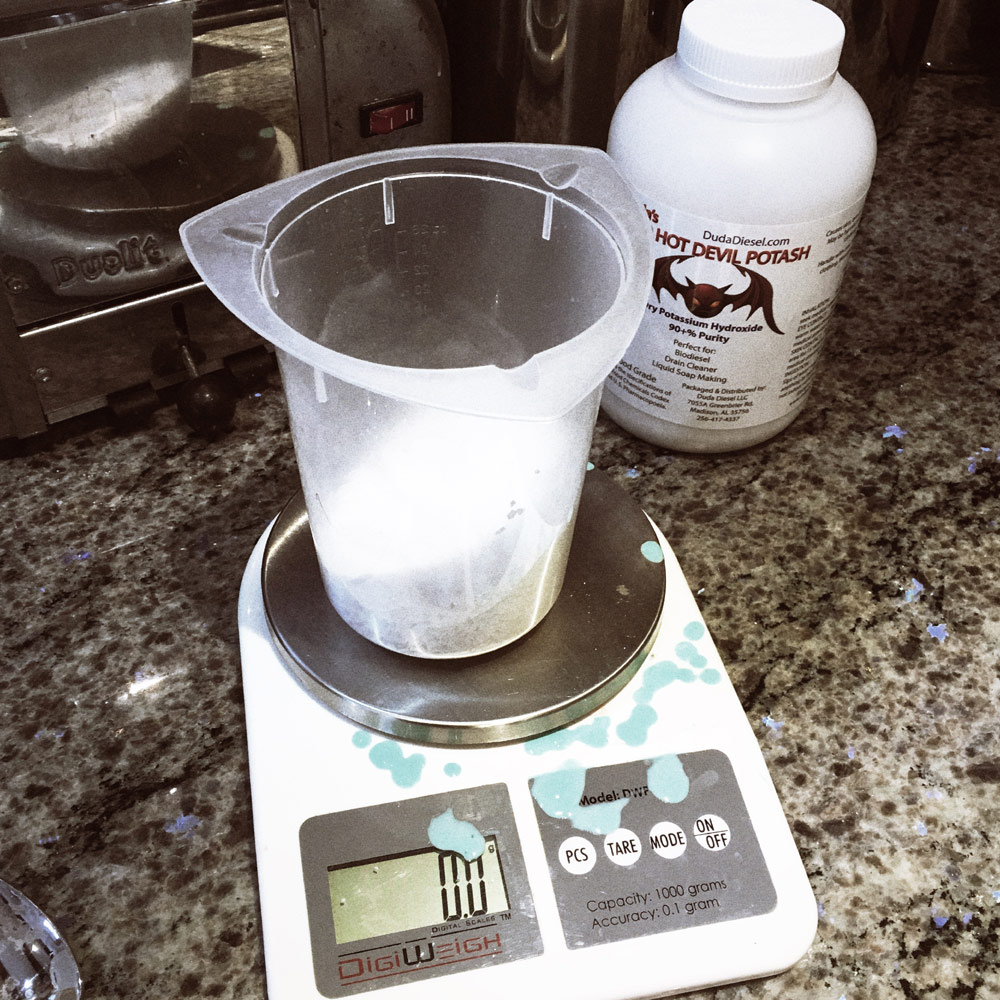 measure out 133 grams of potash, then hit “Tare” and add (slowly, not splashing!) 267 grams of water to it. Stir with a stainless steel something or a spoon. The potash/lye will get hot as it dissolves in water. Set it aside and stir it until it’s clear.

You may see some vapor coming out of the potash/water mix. Resist the urge to sniff it. If your kitchen is remotely well-ventilated it won’t cause you any problem, but if you snort a good breath of that, it’ll make your nose hairs curl. 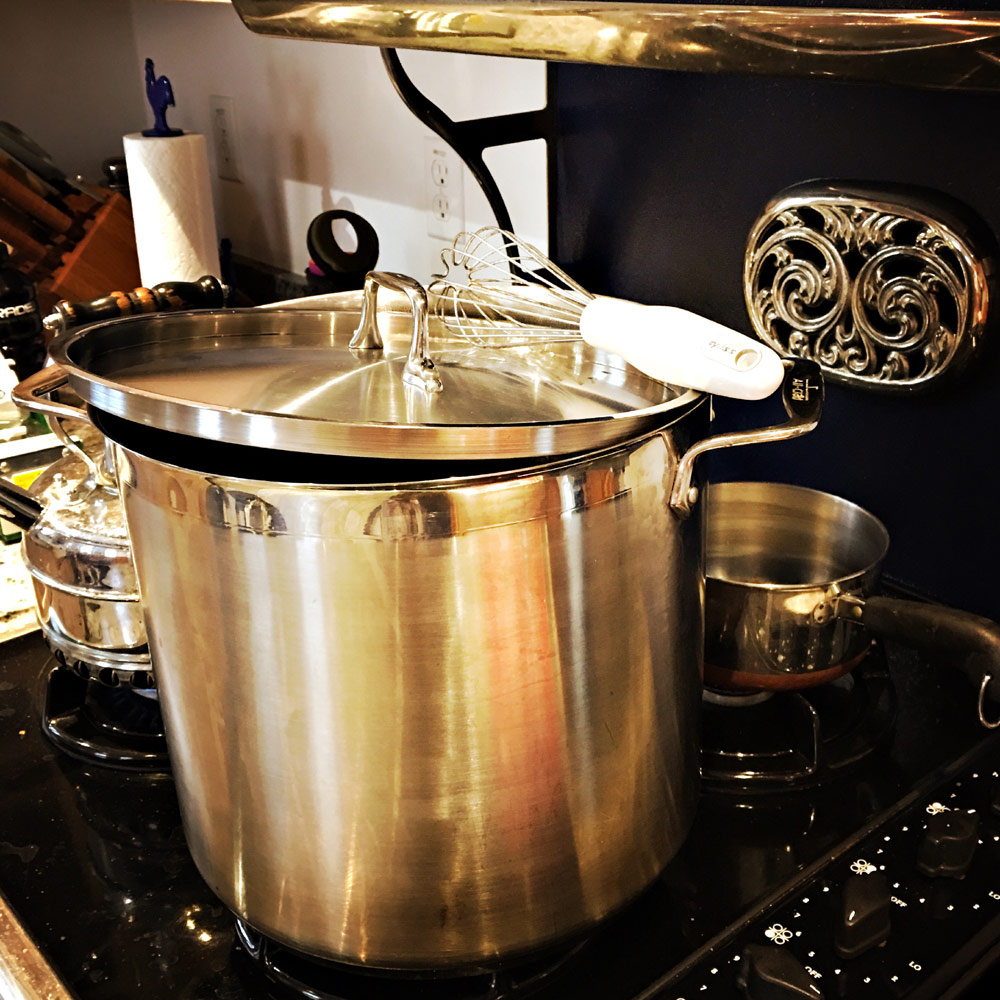 You’re going to need a biggish thing to simmer the soap down in. I used to use a crock pot but they boil over and it’s safer to use a big pot like this. Keep the lid ajar as shown so water doesn’t steam out, but heat can escape and it won’t boil over. 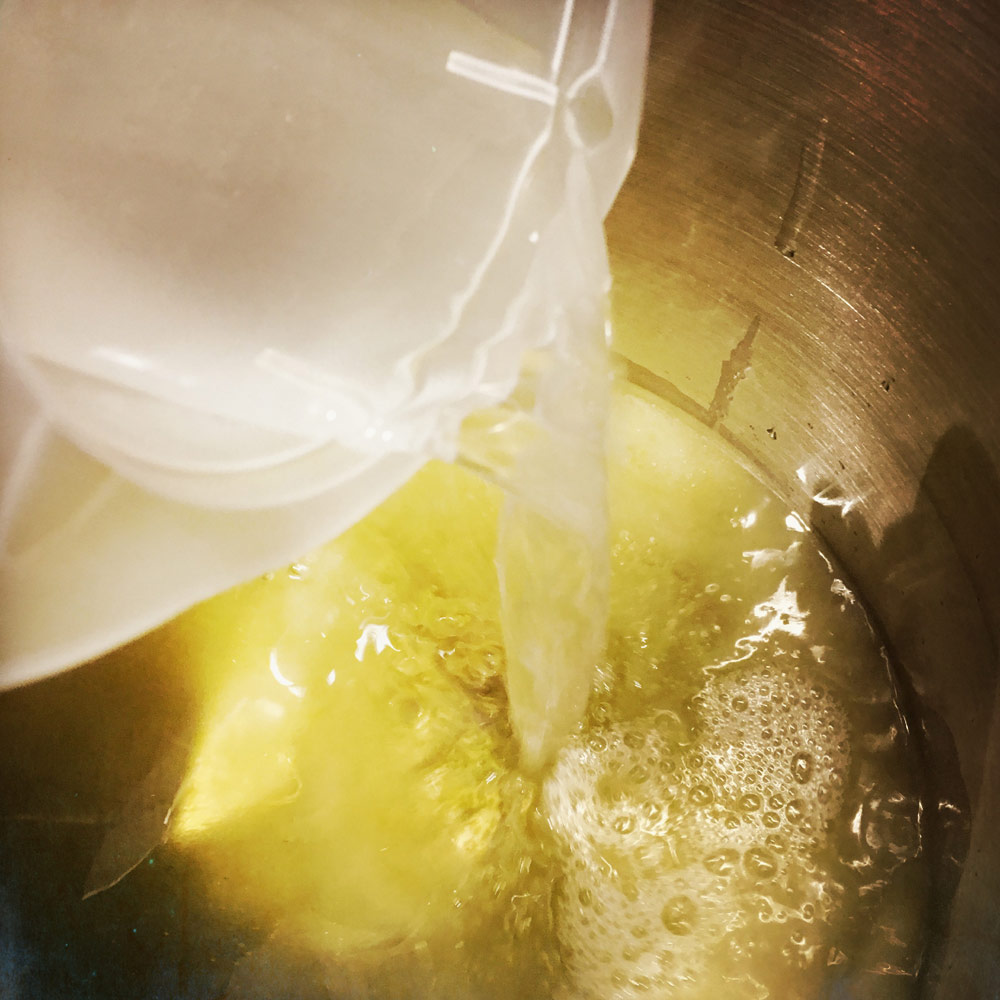 Now you pour the oils into a big pot, and add the potash/water mix. It’s hard to do all that and use an iphone camera so the picture’s not very good. But you’ll see it immediately begin to turn pale where the oils are saponifying. 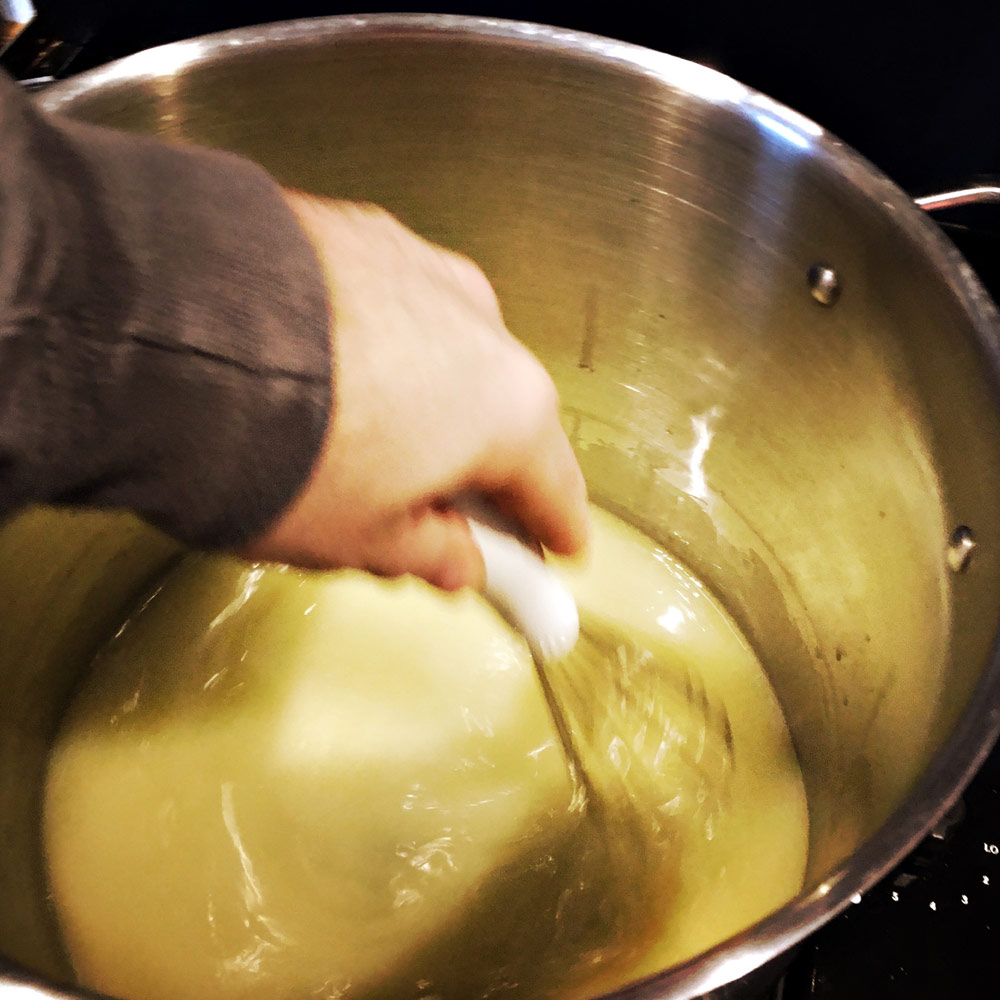 As you stir it up, it starts to get funny – it thickens a bit, heats up some, starts to smell a bit, and gets to be about like honey. That’s called “trace” and is the point where it’s starting to gel. Don’t worry, it won’t gel up – yet. 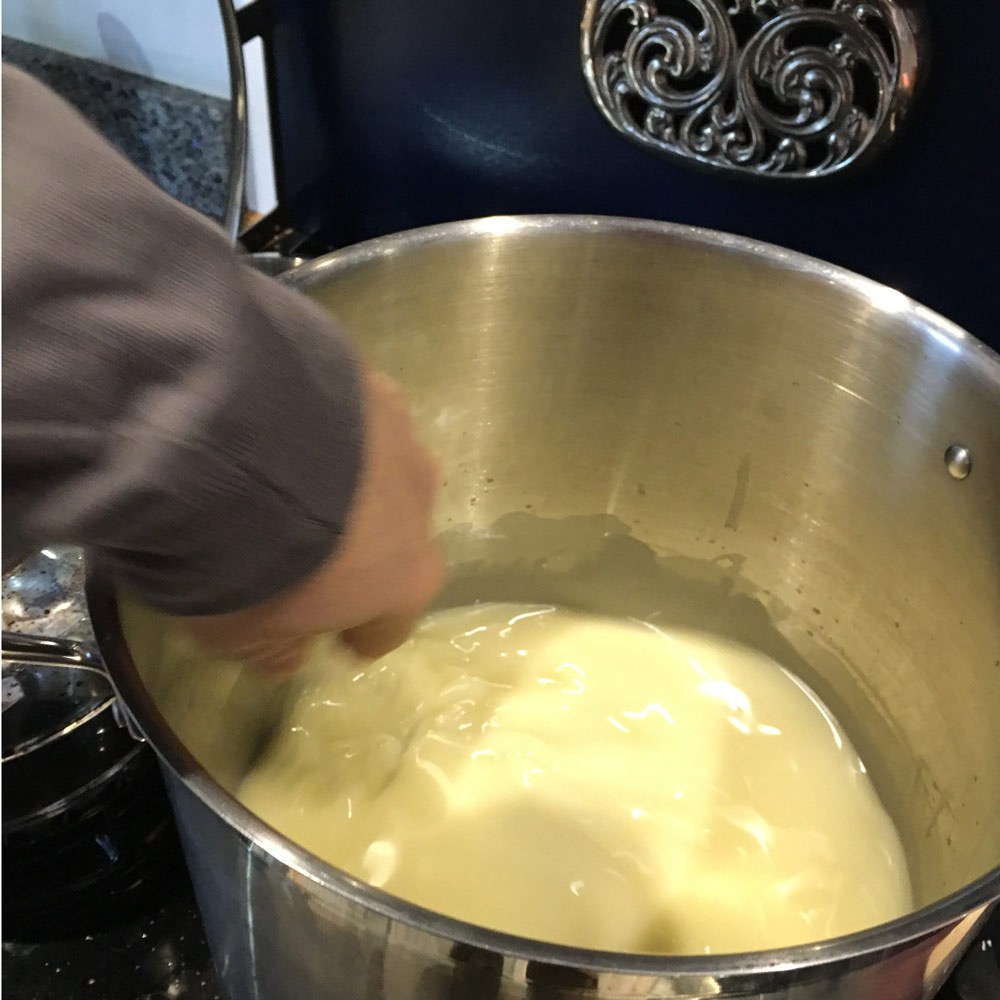 Now, put it on the stove, low setting. Let it sit a while and check on it periodically. It ought to start to bubble eventually. That’s a good sign. You want to stir it every 15-20 minutes and it’s going to undergo some remarkable state changes. 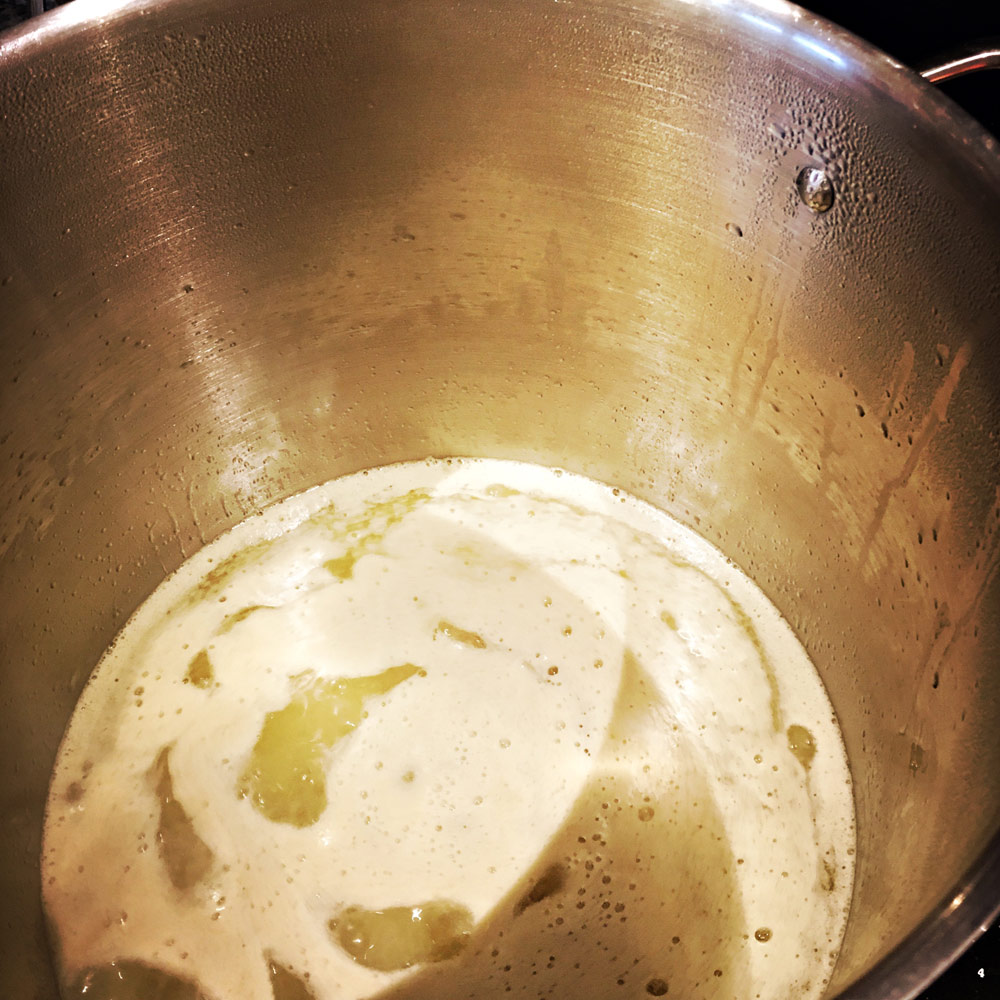 Just started simmering. A few bubbles here and there. You do not want it to boil hard; just simmer like this. In about an hour it’ll change. 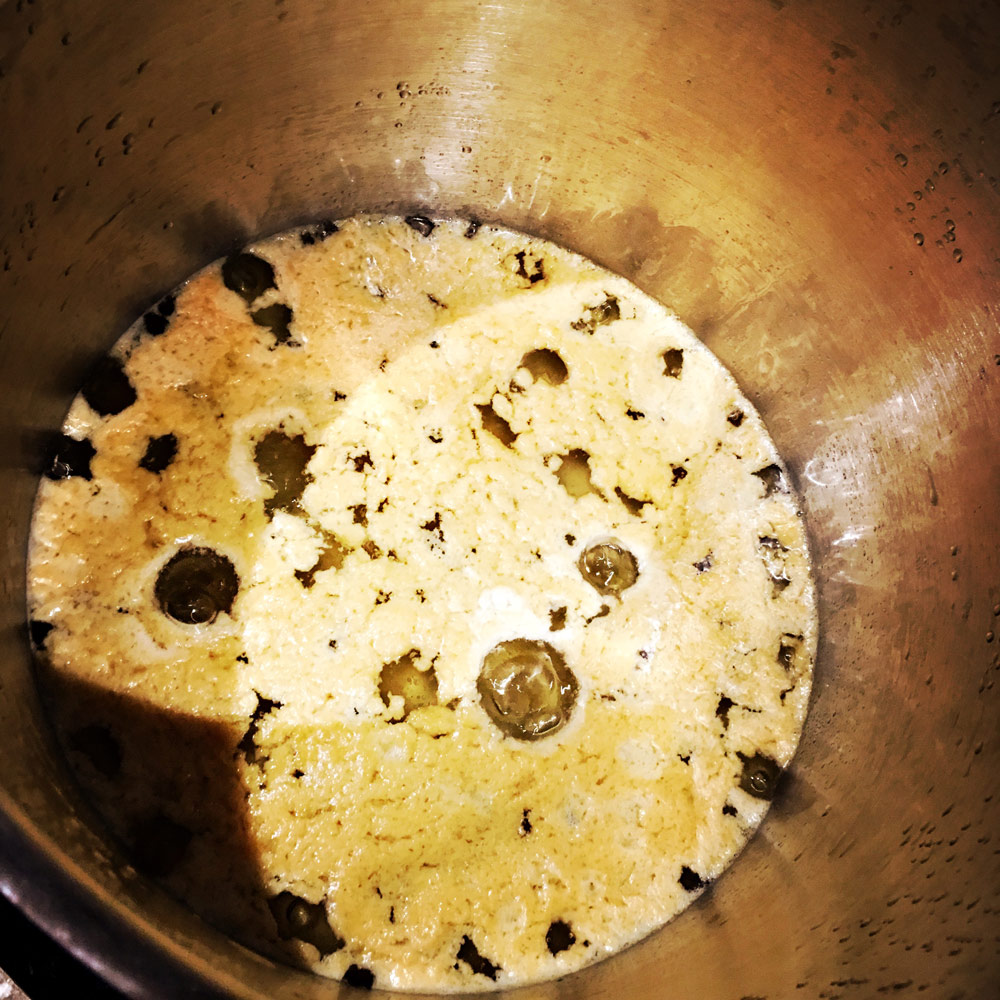 “Scum stage” Here what you see is the stuff that has fully saponified is the clear yellowish liquid, and the remaining solids are fats that haven’t saponified and have curdled. That’s OK – just let the whole thing keep simmering, and keep stirring it periodically until it’s all saponified all the way through. That’s the next stage! 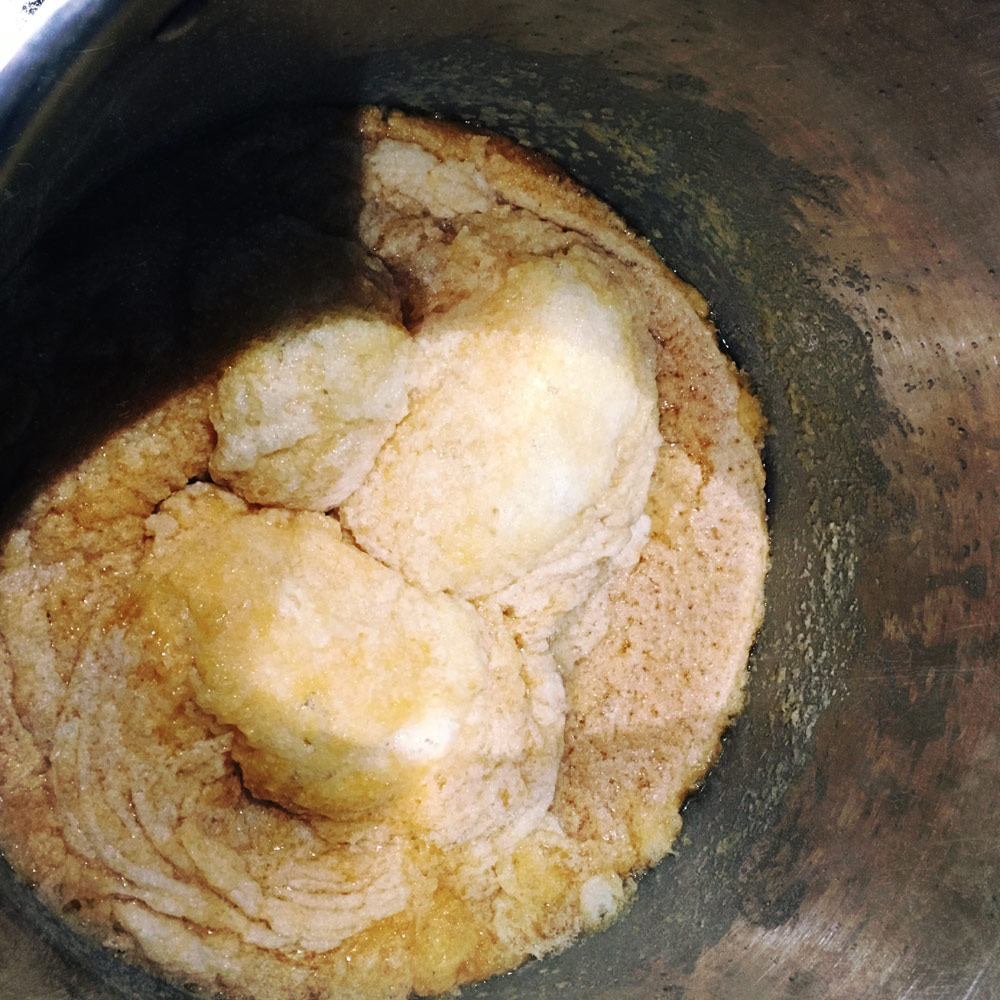 This is the “cottage cheese” stage. It’s basically done about now. But keep the stuff on the stove and keep it warm.

Now, you want to take another pot and put about 1gal of water in it and start bringing it up to a boil or near boil.

If you were to turn it off at this stage a rather horrible thing would happen: it would collapse down into a solid mass that’s strangely impermeable to water. And you’d have one hell of a time getting it out of your pot. Keep stirring periodically while that water’s heating.

Add two tablespoons of borax to the hot water and stir till it dissolves.

Then slowly pour that into the big pot of soap, keeping the heat still going under it. It’s going to congeal into a lumpy goo no matter what you do at this point, but if you put cold water and borax in the pot you’re going to have a lump of gel soap, not a liquid soap. 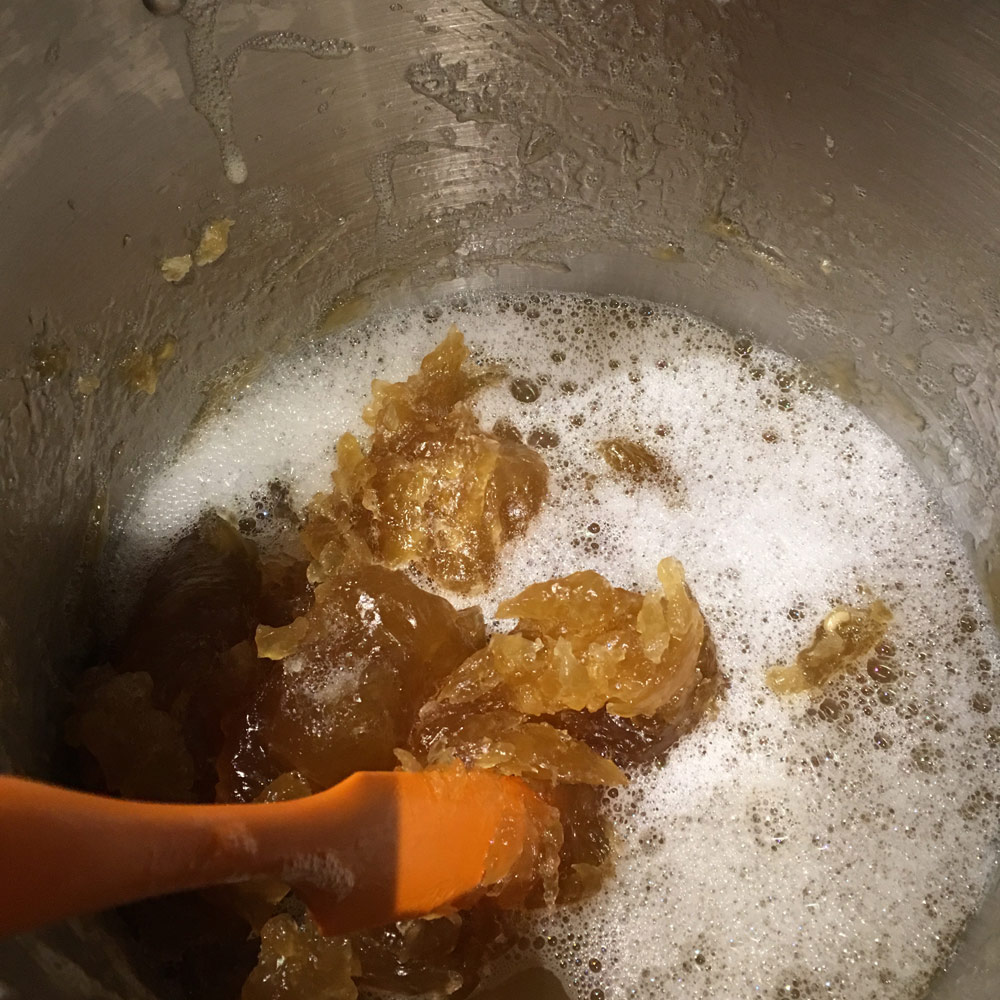 Once it’s dissolved let it cool until it’s hot but safe to handle.

A couple optional steps you can make here – If you measured correctly you can ignore this part:

To finish off, what I usually do next is take a couple bottles and swish a bit of rubbing alcohol and water through them (in case there are any fungi or bacteria in the bottles) then dump and shake them, put a funnel in and fill them with the warmish liquid soap, cap them off, and let them sit on a shelf in a dark place for a couple weeks. If the soap throws a sort of creamy “head” on top (looks like a pint of Guiness’) that’s unsaponified oils; pour the soap gently into a pot, use a spoon to skim the “head” off and throw that away, then re-bottle the clear yellowish liquid. 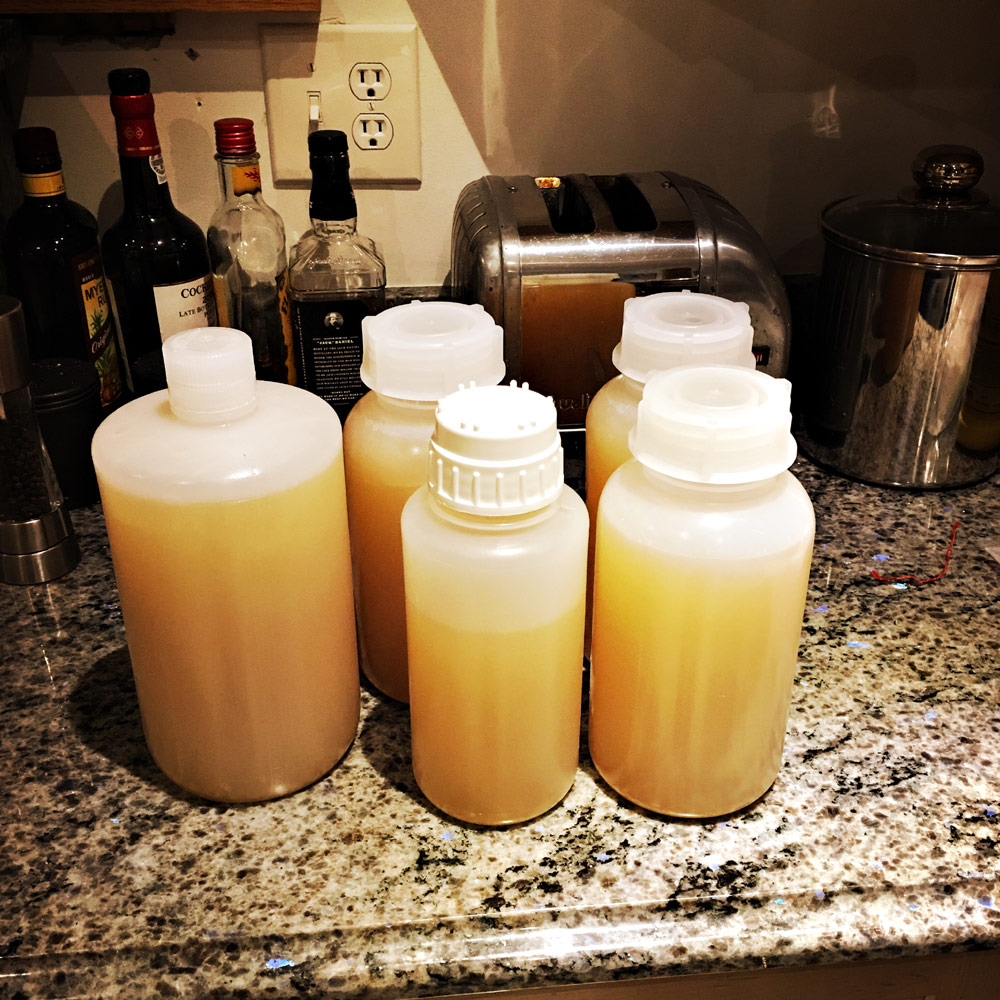 I do not add scent or anything like that to the soap on the shelf. When I’m ready to use it, I usually take a 2 liter bottle, put the soap in it, add scent and whatnot, then dilute it further, and use it!

You wind up with about 1 and 1/2 gallon of ultra concentrated soap. And I mean ultra concentrated. I use about a thimble-full for a load of laundry. When I use it as shampoo, I use a lab dispenser bottle to squirt about a teaspoon worth on my hair and it’s enough for my whole body. So, each of those bottles, which is about a liter, can easily be expanded to a whole gallon of liquid by just adding water. In other words, depending on how you dilute it, that 700 grams of oil makes you about 4 or 5 gallons of liquid soap. I used to feel bad when it was present-time for friends and I’d take a liter of concentrate, cut it into 2 gallons of water, re-bottle it, add scents, and give it out. And the recipients would go “wow that stuff is so concentrated!” Muahaahaa you know nothing!

I buy my bottles here. If you like containers, Freund is gonna blow your screw-top off. Great service and they have pretty much any container you could ever want. They also have foamer pumps. I like to use industrial strength nalgene LDPE bottles because I ship them around and the postal service might think I am a terrorist if I ship packages that start leaking a clear soapy liquid. (Actually, the postmistress washes her hair with my shampoo, so … if anything did start leaking, I’d probably get a call, not a visit from armed men in black suburbans. Clever, huh?)

Soap should not go bad. The more concentrated it is, the less likely anything will come along that can live in it, but soaps that are heavily super-fatted have oil and water, and bacteria can live just fine on oil and water. A fully saponified soap won’t have any edible oil left in it. But if it smells funky, get rid of it, do not pour it out and reuse the bottles.

Once you do this, you’ll realize what an incredible ripoff laundry detergents are. If you use woolite, at $7 a bottle, you’re paying for about a capful of concentrated soap in a bottle of water. I use the ultra-concentrated stuff, straight, without scent, and a liter lasts me almost 6 months (and I’m heavy-handed with my soap because I just make more) This stuff is super gentle on your clothes and you can smell like frankincense and ginger, or whatever you like!

By the way, another incredible ripoff is commercial shampoo. It’s almost always detergent and the main thing that gives your hair bounce and shine is liquid siloxane. I.e.: silicone. There’s nothing wrong with that, except it kills fish and stuff, but it’s basically adding sticky polymers to your hair. It’s going to help repel moisture, I suppose. Realizing that I probably sound like a soap-kook, I use the same liquid soap base for laundry, shampoo, body wash, and hand wash: the only difference is the scents and concentration I use.

I have a batch (see above) sitting on the shelf! I suppose if any of you would like to try some of my soap, I can send you a sample bottle. You know how to reach me.