A few weeks after I sent my reply [stderr][stderr], affirming my citizenship on pain of perjury, I got a response from the CIA. It’s some of the most beautiful bureaucrat-bafflegab I’ve ever tried to parse. 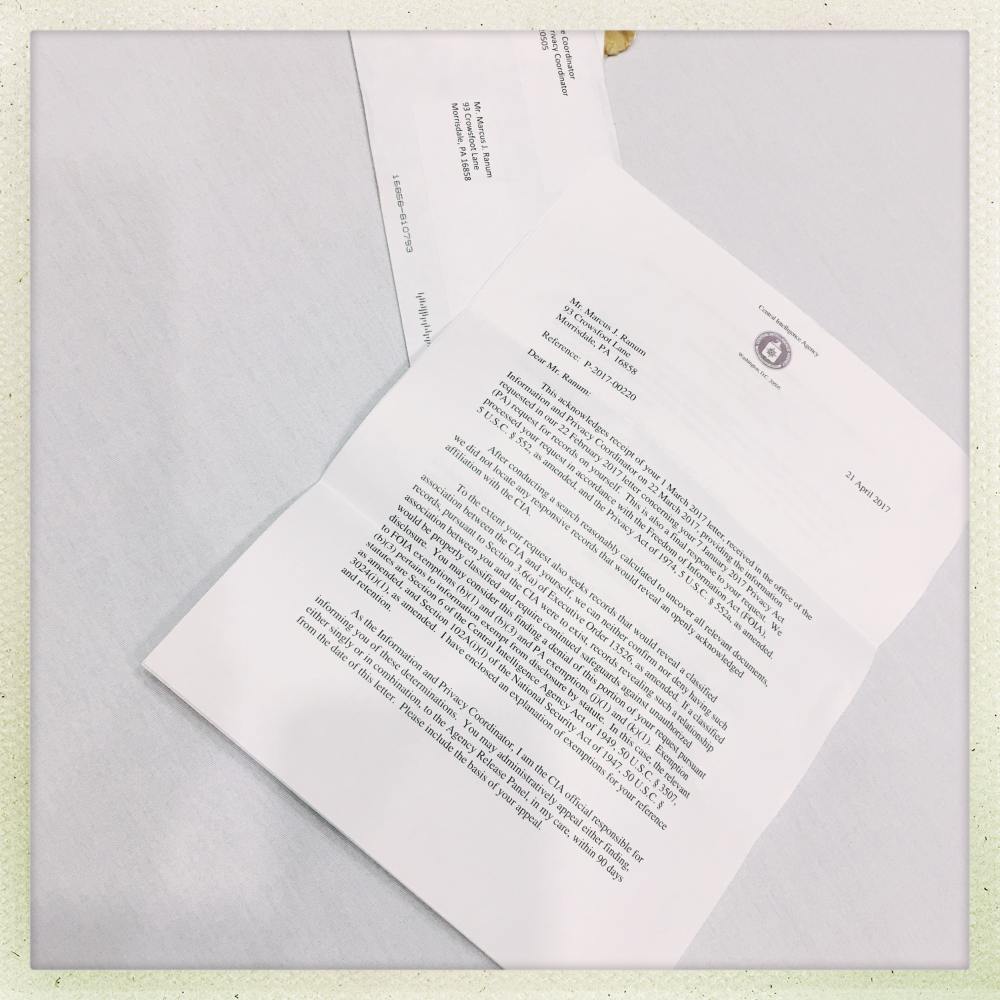 I mean that sarcastically, of course.

After conducting a search reasonably calculated to uncover all relevant documents, we did not locate any responsive records that would reveal an openly acknowledged affiliation with the CIA.

Wait … I did not ask for “openly acknowledged affiliation” I asked for:

Copies of all information, including but not limited to files, correspondence, reports, surveillance or any other records concerning Marcus James Ranum.

There’s quite a difference. “All information” is not “openly acknowledged affiliation.” It makes me wonder if the ‘search’ they did was using Google: “Marcus James Ranum CIA lol lol”  (actually, that search returns 216,000 records on Google)

If I wanted all the openly acknowledged information, I wouldn’t have had to do a fucking FOIA request, now, would I?

To the extent that your request also seeks records that would reveal a classified association between the CIA and yourself, we can neither confirm nor deny having such records, pursuant to section 3.6(a) of Executive Order 13526, as amended. If a classified association between you and the CIA were to exist, records revealing such a relationship would be properly classified and require continued safeguards against unauthorized disclosure. You may consider this finding a denial of this portion of your request pursuant to FOIA exemptions (b)(1) and (b)(3) and PA exemptions (j)(1) and (k)(1). Exemption (b)(3) pertains to information exempt from disclosure by statute. In this case, the relevant statutes are Section 6 of the Central Intelligence Agency Act of 1949, 50 U.S.C 3024 as amended. I have enclosed an explanation of exemptions for your reference and retention.

The enclosed list of exemptions describes the set of all data. Shorter CIA: “FOIA does not apply to us! LOL!”

When you’re a classification authority, it’s simple to just say “everything is classified” and then you don’t have to respond to any of these pesky requests. That’s what appears to be going on here. I’m going to have to send another letter and copy it to the National Archives Records Office requesting clarification, because of the fact that, in 1994, I taught CIA staff a series of classes on how to build internet firewalls, so they could collect ‘Open Source Intelligence’ (i.e.: spook-troll the internet) I’m sure they’ve got visitor logs and project documents regarding that class – I know, because I wrote the documents.

There’s no big conspiracy here; this is just bureaucratic inertia in action. The police state is bureaucracy; its product is more bureaucracy. Secrets breed more secrets until everything is secret. That’s a problem because inevitably, the first thing that gets made secret is government corruption and incompetence: the more secrets a government gets to keep, the more rotten it will become.