Some things about Trump’s apparent disclosure of secret information.

First off, the anti-Trump faction are trying to turn this into a Benghazi!-style Big Deal. It’s not. Sure, Trump is ignorant and that’s a big deal. And he has less sense than a Beagle dog, and that’s also a big deal. However, his supporters already knew that – that was why they elected him – and none of the current kerfuffle is going to change anything.

Reading between the lines, it sounds something like that Trump told the Russians, “our Israeli friends say the bad guys are working on more energetic explosives than usual, with an eye toward producing laptop bombs that can take down a plane.”  And the Russians probably said, “Ah, thank you.” Trump probably wasn’t that articulate, but you can translate it into Trump for your own amusement.

This is actually exactly the kind of international high-level counter-terror information that you want to have shared. It’s possible that Trump’s comments will make the Russians be a bit more careful about laptops (remember: they just lost a planeful of people scattered all over Sharm El Sheik because of an ISIS bomb that was snuck onto the plane.) 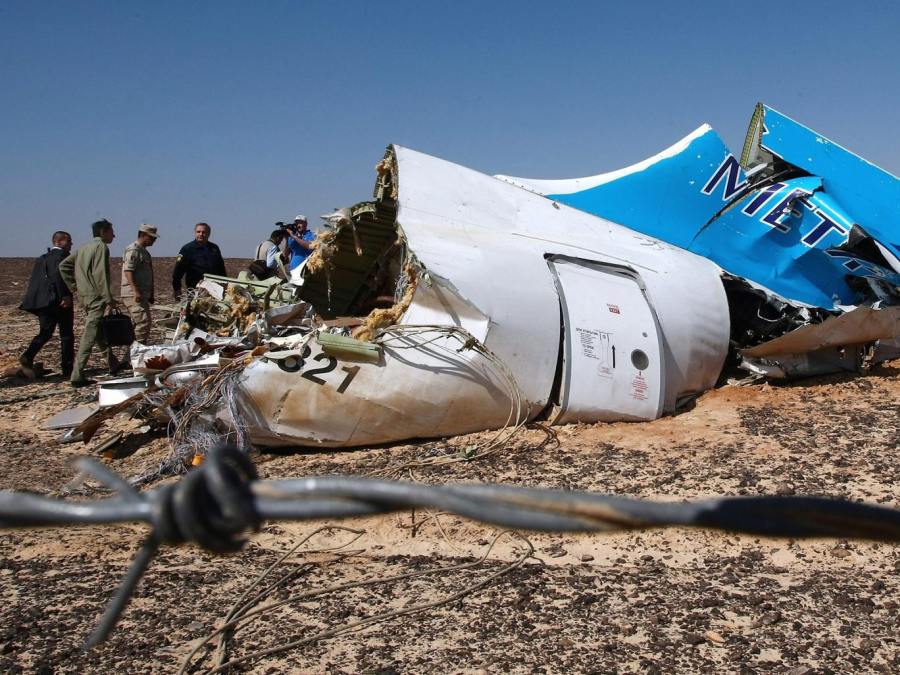 This is no fucking joke people [source]

There is a lot of blatheration going on about “sources and methods” etc., and it’s disgracefully partisan and generally ignorant. This morning I was captivated in the hotel lobby for a few minutes watching an interview with Nancy Pelosi talking about what a big Benghazi!-like Big Deal this is, and I was horrified. I was horrified not by the blank credulity of the network talking head that was ‘interviewing’ her by asking her her pre-positioned talking points, but by how ignorant Pelosi appeared to be about anything to do with intelligence and counter-intelligence. As former ranking member of the Senate Intelligence Committee I expected better of her. I was to be disappointed. Not only was she trying to portray this as a Benghazi! Big Deal, she couldn’t even explain to the talking head what protecting “sources and methods” means and so she resorted to – lying – that’s the only word I can use – by trying to imply that Trump’s stupid leak was going to maybe get service people killed.

Reality check: when the TSA started restricting international laptops from certain companies, the cat was out of the bag and dancing across the table-top. And that’s fine. Imagine that you’ve been working on a laptop bomb and now you’ve just discovered that “oops they’re on to me” – what are you going to do? For sure, you’re not going to try to take that laptop bomb to where you can get arrested and wind up in Guantanamo getting tortured by the CIA. Releasing that information (which happened as soon as the laptop ban went into effect) may have saved lives.

More reality check: when the laptop ban went into effect, perhaps some jihadis went “shit, they’re on to us!”  And then what? Contrary to Pelosi’s stupid lies, they did not immediately shoot an American soldier or intelligence operative. They assumed that some of their communications have been compromised, or that they made a tradecraft mistake, or maybe that there’s a Mossad agent in their operation.

Pelosi was at a CNN town hall hosted by Chris Cuomo on Monday evening as a Washington Post report circulated about Trump’s disclosure of highly classified information regarding ISIS to the Russian officials visiting the Oval Office.

She quickly addressed the report, saying, “We cannot have the president of the Untied States being casually loose-lipped about confirming something, even if it’s in the public domain, to an adversarial nation.”

“It undermines the trust that we would have with our allies,” she added. [time]

If some Russian diplomat had said “hey, there’s word some people are working on learning to fly airplanes, but not land them” before 9/11, everyone would have been thrilled to death including Nancy Pelosi. Pelosi is a lying, horrible, partisan, manipulative political weasel to be a) assuming Russia is an ‘adversarial nation’ regarding protecting citizens of any country against terrorism b) pretending the information is ‘highly classified’ when the laptop ban already effectively declassified it. If you hated the Benghazi! nonsense the Republicans were pulling against Hillary Clinton you should hate the nonsense Nancy Pelosi is dishing, too. Either she’s just a manipulating political carnie, or she’s too ignorant about intelligence to be on the Senate Artificial Intelligence committee let alone any role involving oversight of the US’ runaway intelligence community. 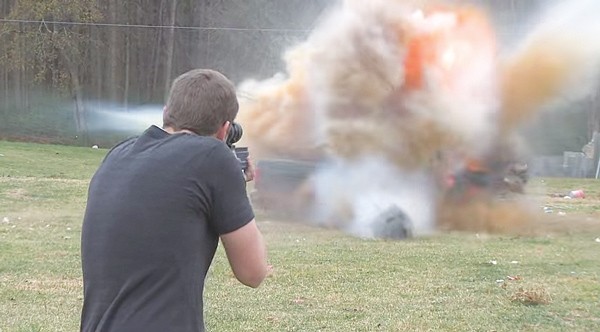 4 cans of tannerite shot with a rifle [source]

Furthermore, it’s a lie that this is some great new bomb-making technique that the jihadis have invented. There is a relatively small number of safe, portable, binary explosives, and it appears that the plot (which is now thoroughly aborted) involved sneaking ammonium nitrate onto a plane in a laptop, in the battery compartment, and then it was going to be detonated against the airframe at a window seat above the wing. That’s how the Russian plane at Sharm El Sheikh was brought down: a schweppes can full of ammonium nitrate [reuters] with a bit of aluminum in it (aluminum powder makes the ammonium nitrate more sensitive) – it’s sold commercially in the US as “Tannerite” [tanner]  There is no great secret intelligence being disclosed: they’re talking about a bomb-making technique that everyone has known about for ages. And now suddenly the media is promoting it as an ‘invisible’ explosive that can’t be detected: more bullshit. If you’ve ever had one of those chromatography swabs: they are very sensitive to nitrogen compounds. Ammonium nitrate would light one of those things up like a christmas tree. If there’s a secret new innovation going on here, maybe the jihadis are thinking about using a glove box and good clean-room techniques to seal the stuff into a laptop battery so they’re not walking around covered in the stuff.

Maybe some Mossad agent who’s embedded with ISIS dropped a note to his handler that he saw someone packing aluminum and ammonium nitrate into laptops. And maybe that agent took a look at Google news and decided his cover was blown and got the hell out of there. Or maybe it was signal intelligence. Or maybe it was just obvious – after all, ISIS did just bring down a Russian plane using that concoction.

I’m sitting here at the airport and the TV is droning… “It was completely reckless”  and “it was top secret” and I’m yelling at the departure lounge monitor so everyone is glaring at me.

Trump is an embarrassment as a human being, never mind a president. But this manufactroversy is revealing how shallow the press’ understanding is. It’s showing how manipulative and shallow the ‘opposition’ like Nancy Pelosi are. It makes me so angry and frustrated to see how openly ignorant the media are; they’re so stupid they just read whatever talking-points they get given by whoever’s trying to manipulate public opinion. And they do it because they know their consumers are so ignorant that they’re not going to question the lies that are being shoveled at them. If the Russians were thinking anything when Trump told them about the jihadi bomb intelligence it was probably, “Why are you telling us this? Our agents in DHS already told us, but we figured it out immediately after Sharm El Sheikh, you stupid child, you!”

The Schweppes bomb was a clever piece of work. It would have weighed about the same, and would have looked like a can of liquid on a scanner (the powdered aluminum would have been invisible against the aluminum of the can) The bomber had to pop the can top and stuff a blasting cap down it, then put it against the side of the plane and put the wires across a battery. It’s one of the reasons that US security practices don’t allow cans of liquid (and you can bet the Russians aren’t, anymore, either!) through security. And it’s one of the reasons that US security checkpoints have random nitrate swipes. The nice thing about high explosives is that most of them involve nitrogen changing state suddenly, which means you’ve got nitro-something compounds lying around that you can look for. [derek lowe]

“If some Russian diplomat had said “hey, there’s word some people are working on learning to fly airplanes, but not land them” before 9/11″ — that actually happened. If you recall, Egyptian intelligence informed the CIA that there was an operation in the wind, at least 6 months before 9/11. The CIA, because they hate the FBI didn’t share secrets with the FBI. The FBI, of course, had its own indicators about the plot, which it also ignored. If some Russian diplomat had informed President Bush a week before 9/11 and the plot had been dismantled, we’d be pointing to it as an epic success in international cooperation.

Listening to horrible lying political weasels like Pelosi saying that counter-terror information should not be shared with an “adversarial nation” means she is saying “fuck the Russians, let the terrorists blow up a few more of their planes.” Memo to Pelosi and other 2-party-systemists who want to oppose Trump: don’t do it by getting down in the gutter with him.

They tell you these lies because they think you’re that stupid. Are you?