The US has committed unknown numbers of ground troops into Syria,[stderr] and has placed them in position between Turkish and ISIS forces near Manbij to act as some sort of buffer zone. 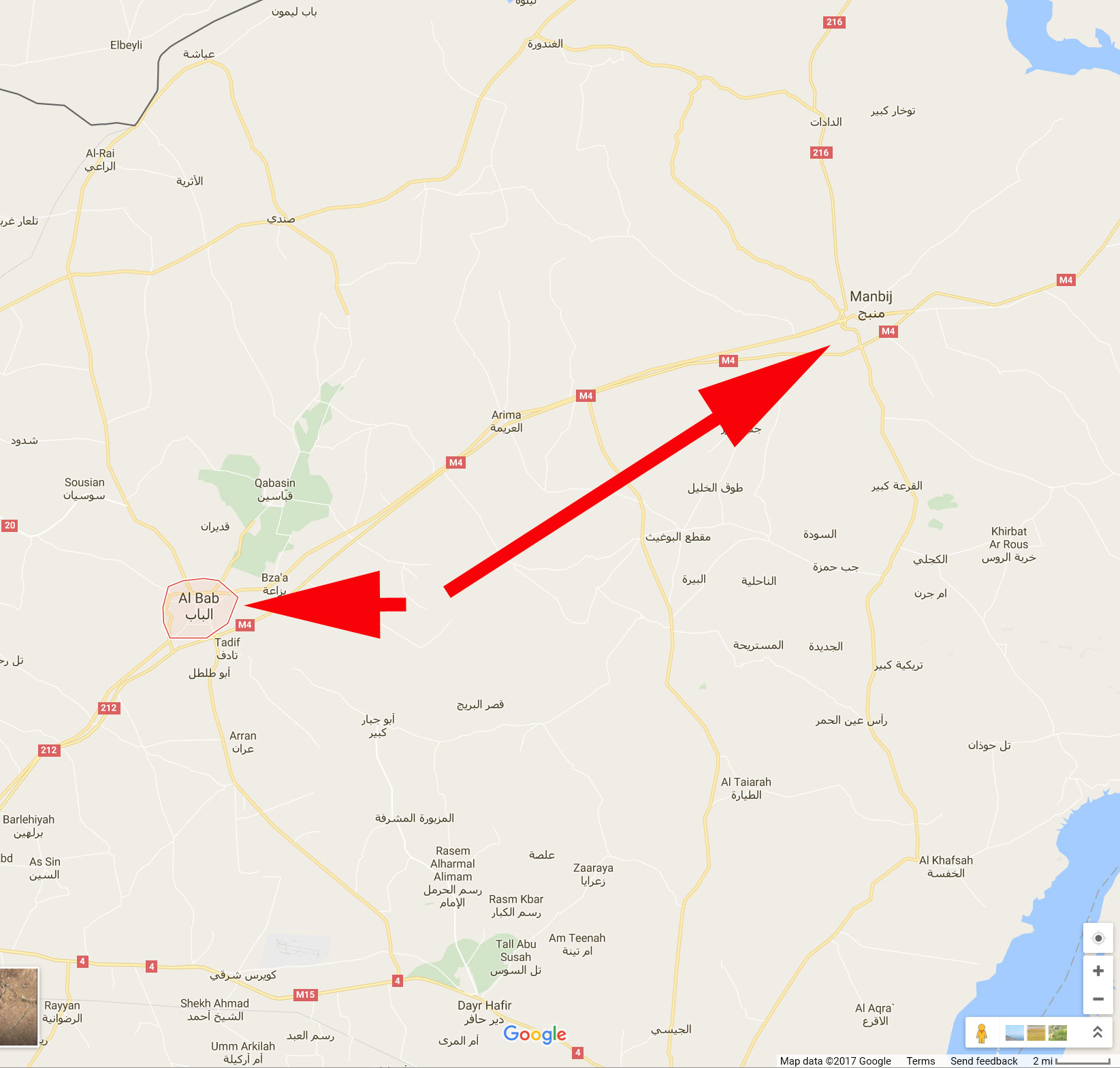 Meanwhile, at Al Bab, which is 10 miles down the road from Manbij, insurgents have been using Russian-made Kornet Anti-tank guided missiles (henceforth: ATGM) to destroy Turkish army tanks. The turks appear to be having a rough time of it. They have lost several German-made Leopard II tanks, in fact, which are considered to be as battle-tough as US-made M-1 Abrams tanks.

This is not a small thing: ISIS has destroyed over ten of the Leopard tanks. That would probably put the US Army to flight; the US Army is not accustomed to taking casualties like that since the Korean War. To refresh your memory, it was a Big Deal when a US Abrams tank was set on fire during one of the “thunder runs” through Baghdad during Gulf War II. Those, by the way, would not have been happening at all, had the Iraqi forces had the kind of anti-tank capability ISIS has now. The US would probably have failed to occupy and hold Baghdad, unless they had followed the Russian model and flattened it with artillery, then marched in over the bombed rubble.

The reason this is happening is because the Turks appear to be overconfident or fatally stupid. (Edit: could be both!) Observe below: (you can start at 1:03 if you are impatient)

We see two tanks silhouetted on a crest-line. Their turrets are traversed, exposing the maximum turret surface area and the thinnest armor. They are not moving at all, other than traversing their turrets around a bit. Another friendly armored vehicle (looks like a light tank or an old M-60) crosses, silhouetted on the crest-line, offering a slow-moving target. The ISIS kornet gunner takes one tank down, and the other remains sitting there, its only reaction to the explosion of its compatriot is to … sit there. In fact the rest of the Turkish tanks: sit there. The sudden violent explosion of one of your squadron is a sign from god that you are in range of something that can kill tanks – it doesn’t take a strategic genius to realize it’s time to get the old bus in gear and get hull down behind something that something can’t go through.

The second Turkish tank traverses its turret some (still sitting there) as the second kornet ATGM bears in on it and blows it to hell and gone. Meanwhile, one of the other tanks starts maneuvering so as to maximally expose its flanks. My assumption is that the only reason any of the Turkish tanks survived is because the ISIS gunners were out of ammo.

Excuses for the Turkish tanks’ performance are somewhat bizzare. [1] The Leopard is designed as a tank-on-tank dueller (no, it’s not) and it’s not designed for urban combat (this wasn’t).  What it wasn’t designed for was for some gomer to park it on a crest-line flank-on within a mile of someone with an ATGM. That’s what it wasn’t designed for. And, judging by the reaction of the rest of the Turkish tank squad, the tank wasn’t designed to be driven by the Turkish army. Perhaps they didn’t get the memo, and thought they were on a parade and they were going to be driving down a street covered with rose petals thrown by heavy metal groupies. Just to give you an idea: a kornet ATGM can punch a hole through practically a meter of steel; the way to survive something like that is not to get hit.

So, that’s the environment that those Americans in their strykers and up-armored humvees are maneuvering into, with their stars and stripes flying from the radio antennas.

There’s an old military dictum that tanks cannot survive without an infantry screen to protect them. That’s especially true nowadays but it was bad enough in WWII when a single holdout with a panzerfaust had a good chance of stopping a column of tanks. In today’s environment, you’d want to have a very deep infantry screen indeed. Something like a kornet can hit pretty reliably out to a mile and a half, so that means your infantry need to be out that far so they can suppress anyone firing missiles and yell for the tanks to move if they see a launcher (or worse: a launch). Those ranges shorten tremendously in urban terrain, of course.

Monday Meslier: 15 – All Religion Was Born of the Desire to Dominate » « No Boots On The Ground