I started writing this as a sort of open snark-gram to Caitlyn Jenner, but I just couldn’t do it. As I started to think things through from different angles, I just got more and more depressed. So, I hit “Move to Trash” and tried again.

Root cause analysis, for me, always comes back to privilege, which is an instance of exceptionalism.

Exceptionalism becomes the idea that one person or group of people is special – they deserve to be treated differently (better or worse). That idea, to me, seems refuted by the absence of gods or any kind of inequality that is not a condition of our birth or imposed by society. And that brings me back to Rousseau and Kant.

So, in my mind I began to lecture Caitlyn Jenner about how she needed to think a bit more clearly about Rousseau and Kant and – yeah, of course I’m wasting my time. But I feel like I understand where Jenner’s coming from: she’s rich, she’s white, she’s famous – so that’s a couple of big check-marks in the privilege chart. And she feels betrayed by her class: rich white people, who the republican party serves to represent. Her complaint against Trump (“Call me!”) sounds like buyer’s remorse, not a clear political view. In other words, I think she completely misunderstood the situation: the party for the rich (motto: “cut your taxes!”) had a bit of a pile-up at the intersection of LGBT rights and “service to wealthy white guys” and Jenner didn’t quite realize that she had moved to a slightly more dubious position on the game-board – a more dubious position than she was already in, that is. I was curious and did a bit of research about some of the other intersections on LGBTQ rights in America, and it turns out that (based on [wikipedia]) you’re not very likely to be killed for being trans if you’re white. Of the fifty-odd incidents of murdered transpeople in the reference, there were a few hispanics, and one white person: the rest were black.

Jenner’s complaint was privilege and buyers’ remorse: she likes the party of “cut your taxes” because taxes are probably important to her, because she’s not as worried about “not having your skull smashed in.” It seemed odd to me that any adult couldn’t think their way through this – yet a lot of women vote for a political party that’s promoting the white male agenda, which isn’t afraid to use racial demonization and sexism as part of the ‘divide’ in its “divide and conquer” messaging. My analysis seems to leave me that Jenner was divided on the taxation/privilege for the wealthy issue, and conquered on the LGBTQ rights issue. The final (and most unkindest cut of all) would be when Trump made her choke on her own words:

When asked if he would feel comfortable letting Caitlyn Jenner use any bathroom she wanted at the Trump Tower, he replied: ‘That is correct.’ [1]

Of course he would! Message to Caitlyn: “you’re still in the rich people’s celebrity club, you still matter.”

Kant comes into the discussion because of his argument around The Categorical Imperative, that our actions create the world we must live in, so we have a responsibility to imagine the sort of world we’d live in if everyone acted as we did.  In the case of Trump’s response about Jenner, “why, yes, we’re happy to throw your black trans-sisters under the bus, because they’re never setting foot in Trump Tower anyway, so … fuck them!” And Jenner appears to be all right with that. My world gets a little colder and a little darker when I think of this. Because it seems so obvious to me.

If we’re not living in a world under control of some great imagined divine teleology, then we’ve got no say in anything prior to our coming online and beginning to make decisions within the context we happen to find ourselves in. (This is not going to become a posting about Free Will!) Whether those choices are real, or constrained, or not, it’s unavoidable fact that we will not all experience the lives we would ideally want: some of us will be rich but most of us (99.9% at least!) will not. Some of us will do well, but most of us will do what we can. Some of us will be reality TV stars or successful athletes, but more – vastly more – will not have the lives we would wish for, if we thought about it. We each live the lives we are injected into, and unless we believe in a god that has placed us here with special blessings or curses, that’s all there is.

Some things about living still weren’t quite right, though. April for instance, still drove people crazy by not being springtime. And it was in that clammy month that the H-G men took George and Hazel Bergeron’s fourteen-year-old son, Harrison, away.

It was tragic, all right, but George and Hazel couldn’t think about it very hard. Hazel had a perfectly average intelligence, which meant she couldn’t think about anything except in short bursts. And George, while his intelligence was way above normal, had a little mental handicap radio in his ear. He was required by law to wear it at all times. It was tuned to a government transmitter. Every twenty seconds or so, the transmitter would send out some sharp noise to keep people like George from taking unfair advantage of their brains. [Vonnegut]

Kant argues that we create the world we are going to have to live in, so we had better think about the universality of our actions. Clearly, when he wrote that, he was trying to establish “The Golden Rule” on a solid basis – and I think it’s one of the noblest attempts to cross the is/ought chasm that any philosopher has ever made. So, if we listen to Kant and try to weigh the universality of our actions, it seems obvious that one should not increase unfairness toward another, because you create an increasingly unfair world and eventually you will also come in for your own share of unfairness. Likewise, if you support a political party that has consistently favored racial unfairness, unfairness toward LGBTQ, income inequality and unfairness toward women: you oughtn’t be shocked (as Jenner was) when they turn on you and throw you casually beneath the wheels of the bus. Jenner then shows an utter lack of philosophy by accepting Trump’s acknowledgement that she’s still in the rich white people’s celebrity club, and it’s OK. After all, rich white celebrities can tell a president “call me” without everyone simply laughing at them. What Jenner doesn’t appear to realize is that Mark Zuckerberg[1], Peter Thiel [2] or Jeff Bezos [3] will always, always, always, be in line ahead of her. And, because that’s the kind of world she chose to support, through her support for that political party, that’s the way it’s going to be.

I wonder if we’ve heard the last of this affair; if Jenner is going to be mollified by knowing that she can use the bathrooms in Trump Tower. I suspect that’s how it’s going to play itself out, because someone who thinks about this wouldn’t be a republican at all, wouldn’t have reached out to Trump with the “just between us oligarchs” appeal, and would never have made the mistake of thinking that the politicians she supported gave a flicker of thought for her, or anyone else. 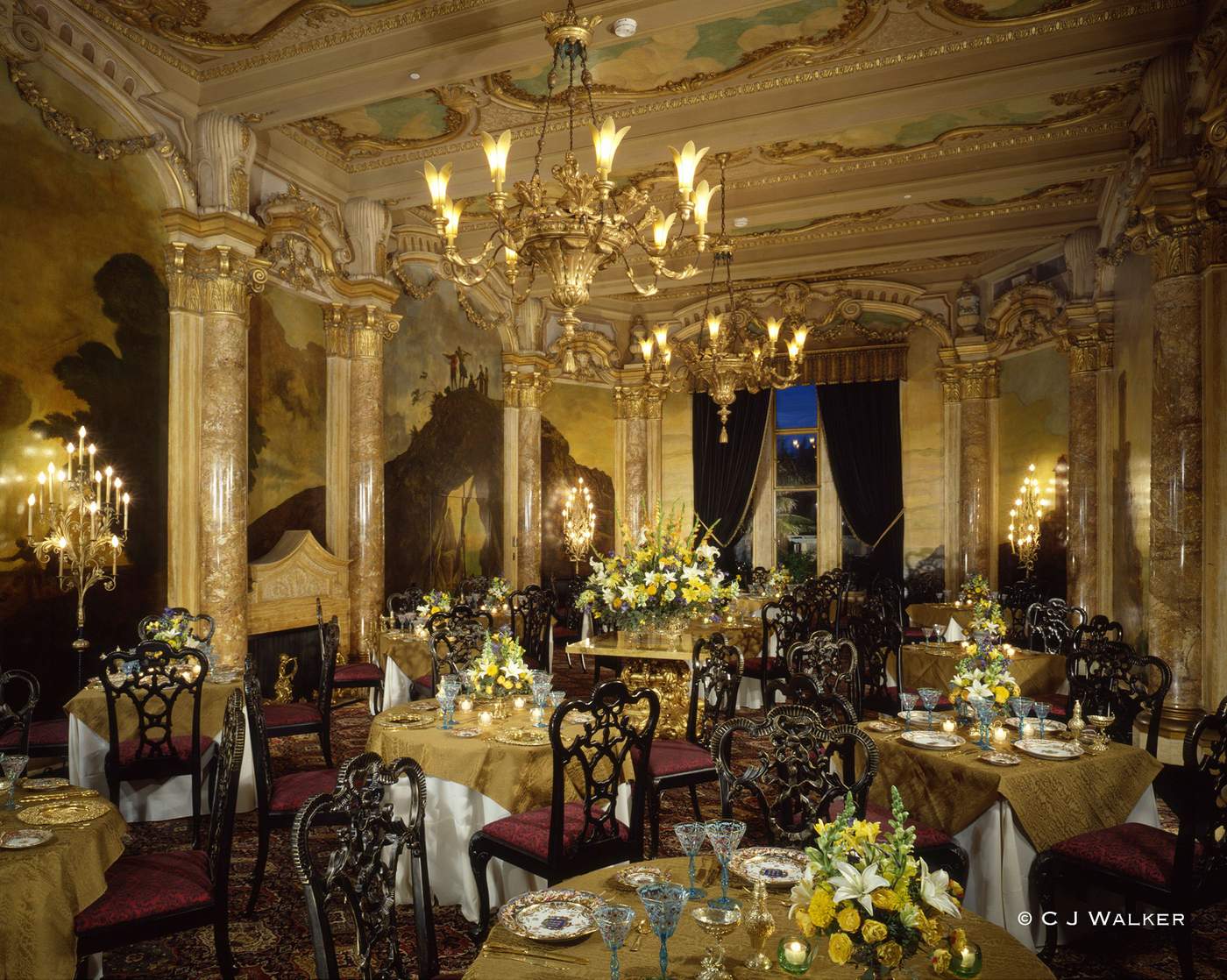 If you were Trump, this would be your god.

Here, I will ask you to reflect for a moment and consider whether you wish you had Donald Trump’s life, or not. It’s doubtless a life of misery: a thin veneer of self-satisfaction over a deep undercurrent of bad taste, insecurity, and the awareness that you’re still the kid who got pushed around on the playground and you’ll never be as popular as you want to be. If you could have Donald Trump’s life, you wouldn’t be able to lead it any differently than he did, because you’d be Donald Trump, and you’d lead that life Trumpstyle: you would be unable to spend that money doing something interesting or worthwhile; your idea of ‘worthwhile’ would be patting yourself on your shoulder for being able to hire workers to put a new layer of gilt over a shockingly crass display of nouveau richesse. You’d be rich, of course, but you’d be a rich piece of shit, writhing in your own insecurity and narcissism. I would rather die.

The Golden Rule is not about covering every possible surface of your surroundings with gold leaf. And Wikipedia [wik] gets it profoundly wrong in combination with Google search, returning:

The “Golden Rule” has been attributed to Jesus of Nazareth, who used it to summarize the Torah: “Do to others what you want them to do to you. This is the meaning of the law of Moses and the teaching of the prophets” (Matthew 7:12 NCV, see also Luke 6:31).

The article itself points out that there were many other philosophers who formulated that dictum hundreds of years before jesus allegedly did.

Monday Meslier: 4 – Of the Falsity of the Christian Religion » « Things That Delight Me: Things I Won’t Work With