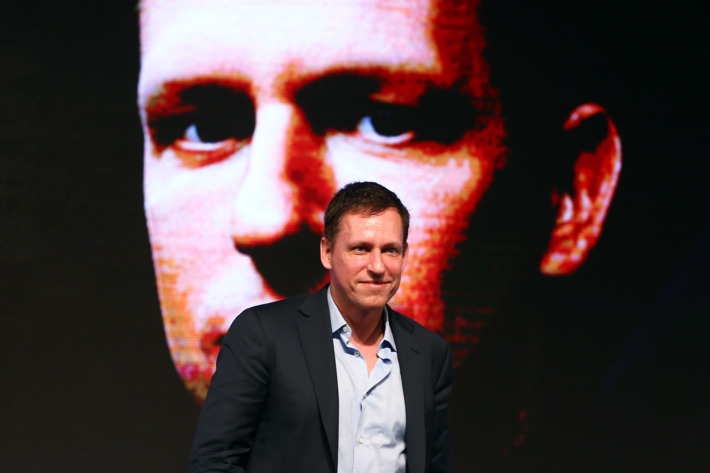 The outspoken Silicon Valley billionaire and Trump supporter has been discussing a prospective run with advisers. [politico]

See how gently the media lays its virtue down before the new oligarch? He’s “outspoken” – not “raving asshole.” Remember the old saying “Poor people are crazy, rich people are ‘eccentric’?”  Thiel, apparently, is rich enough that he’s not even eccentric, he’s just outspoken.

Adding fuel to the speculation: Thiel raised eyebrows this week when he granted a rare interview to The New York Times’ Maureen Dowd. In the interview, he outlined his political worldview and explained his support for Trump. (At one point, Thiel said, perhaps jokingly, that he’d be “fine” with California seceding. “I think it would be good for California, good for the rest of the country. It would help Mr. Trump’s re-election campaign,” he added.)

Aaaaa, haaa haaaa haaaaa He’d be “fine” with California seceeding because it wouldn’t hurt him. In fact, he’d be one step closer to being King of California. By the way, Mr Thiel, I have an alternative suggestion for America: Give California Back To The Indigenous Tribes. Or Mexico. Remember Mexico? Did you see the breathtaking, callousness of his quip? He’s willing to throw the entire state of California under a bus in order to improve Trump’s chances of re-election! I sure hope that if he runs, voters remember that.

He isn’t the only billionaire who may run. Environmentalist Tom Steyer, a prolific giver to Democratic causes, is also seen as a possible contender.