A few years ago, I read a book about the big terrorist bombing in New York. You know, the one in 1920. And it got me interested in the turmoil of the time – a time when, largely due to the depression, Americans were realizing that capitalism wasn’t quite their friend after all. So I wound up reading about the bonus army and how they were suppressed with cavalry and tanks commanded by heroes. 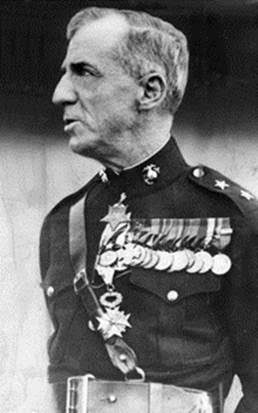 In one of the accounts I read, I came across the name Smedley Butler. I’d already heard of Smedly Butler because I’d read his pamphlet “War Is A Racket” and registered him as “another old soldier who opened his eyes after a lifetime of killing people.”*  So I bought a biography of Butler and inserted it into the queue. Reading it, I felt like I had fallen through the bottom of one world and woken up in another. I grew up during the time when the US was interfering with politics in Central America – supporting the contras in their attempt at “regime change” in Niceragua, invading Grenada, Panama, etc. Of course it seemed obvious that the US has been doing that sort of thing for a long time, but the depth and scope of it blew me out of my chair. Butler was in the thick of it, along with  John Lejeune were “founders of the modern Marine Corps” – i.e: the transition from the marines being soldiers attached to a naval vessel, into a political arm used to repress and overthrow governments worldwide.

Butler seems to have been a remarkably self-actualized person. He did what he did and he didn’t appear to care very much about anything beyond doing it well. There are pictures of Butler, grinning, with other marines, “observing” while the president-puppet signed directives. Woodrow Wilson had sent the marine corps in to take over Haiti in 1934, and Butler did what the marines do best: killed a lot of people.

From “War is a Racket”

WAR is a racket. It always has been.

A racket is best described, I believe, as something that is not what it seems to the majority of the people. Only a small “inside” group knows what it is about. It is conducted for the benefit of the very few, at the expense of the very many. Out of war a few people make huge fortunes.

In the World War a mere handful garnered the profits of the conflict. At least 21,000 new millionaires and billionaires were made in the United States during the World War. That many admitted their huge blood gains in their income tax returns. How many other war millionaires falsified their tax returns no one knows.

Out of war nations acquire additional territory, if they are victorious. They just take it. This newly acquired territory promptly is exploited by the few — the selfsame few who wrung dollars out of blood in the war. The general public shoulders the bill.

And what is this bill?

For a great many years, as a soldier, I had a suspicion that war was a racket; not until I retired to civil life did I fully realize it. Now that I see the international war clouds gathering, as they are today, I must face it and speak out. 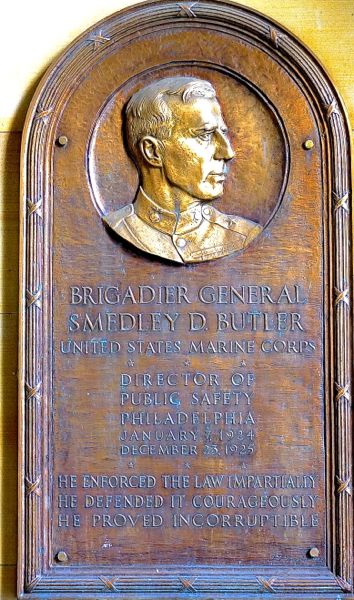 He kicked their asses, they put up a plaque to him

When Butler left active duty** he continued to be involved in adventures. One of his post-military adventures was taking the job of chief of police for Philadelphia. The prohibition of alcohol was in full swing, and Philadelphia had gang and crime problems related to alcohol smuggling and illicit consumption. Several large speakeasies operated quite openly – including the Ritz Carlton. Butler’s response was to treat Philadelphia the way he treated Haiti and Cuba: they dropped a shock-and-awe style campaign of ruthlessly smashing speakeasies (and their owners) until the criminal population quieted down and went underground. It was a classical repression operation: boots and clubs, not hearts and minds. The people of Philadelphia – those that hadn’t had their teeth smashed in – i.e.: the wealthy and powerful, cheered Butler as “incorruptible.”

All of that is set-up for the “blip” I referred to in the title.

1933: The depression, labor’s war against capitalism, the bonus army, fascism in Germany looming on the horizon, prohibition and gangsterism – here’s where history gets murky. Here’s where Butler either goes off the rails, or continued to be a matter-of-fact truthful bastard, and something horribly wrong got swept under the rug: Butler claimed that wealthy bankers and capitalists approached him through an intermediary to lead a military coup and take over the US.

And, pretty much immediately, became Butler the crank, instead of Butler the incorruptible.

The story goes that Butler called J. Edgar Hoover, Hoover called Roosevelt, and then things get hazy. Basically, it sounds like the president and the FBI asked some discrete questions and decided that the answer didn’t make sense, so they fobbed it off on the newly-formed House Committee on Un-American Activities and decided to let them investigate. Butler testified that he had been approached by two men, operating through The American Legion, supposedly backed with large financial resources by Brown Brothers, Bush, Harriman, and Dupont (corporate), U.S. Steel, Montgomery Ward, Goodyear Tire. When listing “key shareholders of…” that means “the families that own the majority of those companies.” Basically, the capitalist overclass.

The whole thing was dismissed as a gigantic hoax.

It may well have been. What’s incredibly weird about the whole thing, to me, is that it’s dropped down the memory hole and someone hit the flush lever. The House Committee on Un-American Activities veered sharply away from the coup story and started investigating communists, instead. Butler had known that any investigation would have to take him at his word, and, apparently, that just wasn’t enough.

Curt Gentry’s biography of J. Edgar Hoover describes Hoover’s reaction to the whole thing – the FBI investigated and nobody knows what Hoover thought: did he believe Butler? Did he think a bit of fascism might be good for the country? Did he think it was a hoax? What I’ve always found to be utterly odd is Hoover’s apparent obsession with communists undermining the country, and jews (who invented communism, after all!) teaming up with labor and the civil rights movement. Clearly that was a bigger threat. Hoover, like all good cops, knew to kiss the hand that pet and slapped him.

I see all of this as part of a skein running through US history – the same people who were behind the American Legion were the same people who were adamantly opposed to Roosevelt’s “New Deal” the same people who supported white supremacy and derided it as the “jew deal” and they remain in the same spirit today – ready to “make america great again.” It’s the same consistent anti-union, pro-capital politics that prefers to use the boot and the fist, that militarizes the police, that favors “regime change.”

The nasty political thread that favors toppling governments abroad, as Smedley Butler did so ably, may have been planning on running their same playbook in the US. One more puppet president, with a grinning Smedley Butler standing over his shoulder while he signs decrees.

I helped make Mexico, especially Tampico, safe for American oil interests in 1914. I helped make Haiti and Cuba a decent place for the National City Bank boys to collect revenues in. I helped in the raping of half a dozen Central American republics for the benefits of Wall Street. The record of racketeering is long. I helped purify Nicaragua for the international banking house of Brown Brothers in 1909-1912. I brought light to the Dominican Republic for American sugar interests in 1916. In China I helped to see to it that Standard Oil went its way unmolested.

You should read all of “War is a Racket” – he calls out Mussolini and Hitler as likely to start a war, and quotes Il Duce’s writings in International Conciliation,” the publication of the Carnegie Endowment for International Peace.”

We don’t learn the history of a time until after all the bodies are buried and the truth can come out. By now, the truth about the coup/hoax ought to be beginning to surface. In the meantime, I believe Butler was telling the truth as he saw it. He may not have been incorruptible, but he was exactly the kind of heartless bastard that would let the chips lie where they fell, and damn the consequences.

There’s one other thing: Butler said that the conspirators wanted him to lead an army of 500,000. That’s always stuck in my mind because that’s about the size of a force that I think you’d need. Either the people backing the conspirators had actually done some thinking about the complexities of a coup (i.e.: they did not have Donald Rumsfeld working the problem) or that came from Butler.

The logistics of coming up with 500,000 men, though… That’s daunting. Unless the leader of your coup was a war hero and could pull away pieces of the military.

It’s kind of interesting how political scandals today are things like: “Hillary Clinton’s email server” or “Benghazi!” or “David Petraeus’ naughty txting with his girlfriend” that the FBI investigates so enthusiastically. Think what would have come up, today, in the emails of the alleged coup-plotters (all of which could be retrieved the same way that David Petraeus’ txts were) We see, again and again, that the powerful knew and concealed things that were inconvenient. You’d kind of expect “us, the people” to figure that out and turn the scrutiny on the wealthy and powerful, rather than letting them put us under a microscope.

Smedley Butler: War is a Racket

Wikipedia on The Business Plot

About Haiti and the US Occupation and interference: “L’Occupation”

Butler’s stint as chief of police in Philadelphia

Timeline of events relating to Butler and the coup

(* Hackworth’s “About Face” being the quintessential example of that genre)

Russians Manipulating The Election » « The Hardcore of Yore – Margaret Hamilton