Elections have always been manipulated. To this ageing anarchist, elections are nothing but manipulation: they’re trying to convince you that you actually have some say in the political process, which is absurd since your opinion or vote is diluted to a near-homeopathic degree.

Let’s see if I’ve got this right: a political system in which the influence of money in campaigns is a topic of constant conversation, to the point where the campaigns brag about how much money they are bringing in – is complaining about “manipulation.” Is the issue that the Koch brothers aren’t Russian, or something? Oh, wait, I got that backwards – is the issue that the Russians don’t have a PAC? A political system with voter suppression, gerrymandering, lobbying, selective information leaking, doxxing, and revolving doors at every level of government is actually complaining that the Russians are attempting a little bit of “regime change”? Maybe we should just be thankful they’re not using high explosive, like the US does when it wants to influence an electoral outcome.

Even when we don’t resort to high explosive, is the government that’s complaining about possible hacking attacks on voting machines the same government that encouraged Twitter to maintain service so that protestors could help organize following the elections in Iran, or to disable their service to help suppress riots (aka: “voter unrest”) in London? The government that is complaining about the Russians possibly interfering with the vote is the same government that is captured by a two-party system that utterly dominates the vote, disenfranchising at least 15% of a population of 318 million. The Russians fondest dream would be to be able to have a fraction of the impact on the US election that its own internal corruption has. Let me give you Russians a hint, in case you’ve not been watching the news: BRING MONEY. If you want to influence the US election, you need Koch Brothers capital, not hackers. You need to be like the US, parachuting people into Texas with suitcases of greenbacks, like CIA did in Afghanistan, Libya, Iraq, and Syria.

Russia cannot possibly make a mockery of the US election to the degree to which Donald Trump has; the only way I would believe that Russia was interfering with the vote would be if Obama doxxes Trump’s birth certificate and reveals that Trump was born in Leningrad and has been a KGB prank all along. 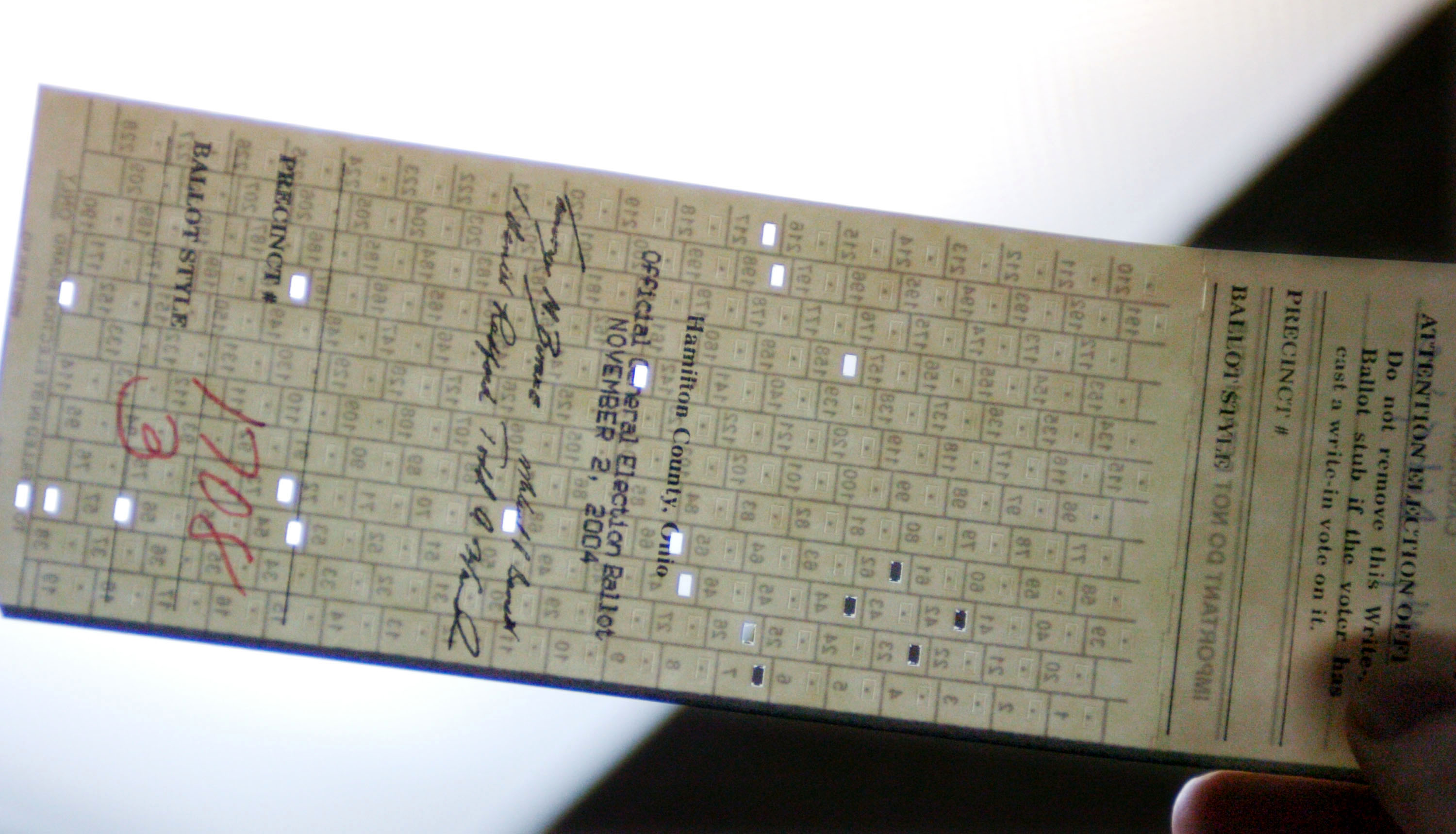 Chad is not just a hipster

My old colleague Avi Rubin has been hammering at the security of voting machines for over a decade. And, it turns out, that they suck. Are you shocked? Some of them are made by big-name companies that make automatic teller machines. But, because the flow of money in voting machines is taxpayer->government->voting machine company, rather than bank->robber, the systems are built to less exacting standards.

Cheer up! It could be worse: the voting machines could be made by the companies that made the F-35.

With significant U.S. federal funds now available to replace outdated punch-card and mechanical voting systems, municipalities and states throughout the U.S. are adopting paperless electronic voting systems from a number of different vendors. We present a security analysis of the source code to one such machine used in a significant share of the market. Our analysis shows that this voting system is far below even the most minimal security standards applicable in other contexts.

In other words, this is not a new problem. And various state governments are just now getting excited because Russian hackers are going to jigger the votes, instead of racist politicians gerrymandering them. Here’s what’s really going on: they’ve realized that they bought crap, and that to un-crapify their systems they’ll need to spend money, and if they complain loudly enough about Russian hackers, maybe they can get the money. Because it’s easier to say “Russian hackers coming after our voting machines!” than “We spent your money foolishly and thoughtlessly! Fire us!” 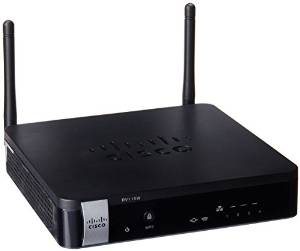 Besides, there are certain ways that voting machines can easily be made more secure: don’t connect them to a badly-managed network. Or connect them to a purpose-built network, or (least optimal) set them up on Virtual Private Network (VPN) tunnels to some well-secured operations center. This is all stuff that anyone with basic computer security experience can understand, design, and implement. The Cisco RV110W wireless access point/router/VPN firewall costs a whopping $49 on amazon.com, although whoever stirred the operating system release that runs in the voting machine ought to have turned IPSEC on as a mandatory only-option, then designed some trivial enrollment and configuration management atop that. I’m not saying those are super simple problems to overcome; they’d take a mediocre systems programmer a couple weeks.*

The Help America Vote Act created the Election Assistance Commission with a charter to spend congressional largesse in order to build a cargo cult voting system following the ridiculous 2000 electoral deadlock. Following the creation of the commission, in 2002, it was without a commissioner until 2011 in spite of $3.5 billion in congressional appropriations to, uh, do something. Maybe they had a bonfire with the money, or something. Articles about the EAC soft-pedal, i.e.: “there was some criticism that EAC was slow and ineffective.” Instead of, “What, are you fucking kidding me?!”

Meanwhile, cryptographer-of-practical-genius David Chaum holds patents on several key innovations for electronic voting. He’s actually thought about this stuff and has defined the way a voting system should behave (beyond: “swim in a barrel of pork”) that: 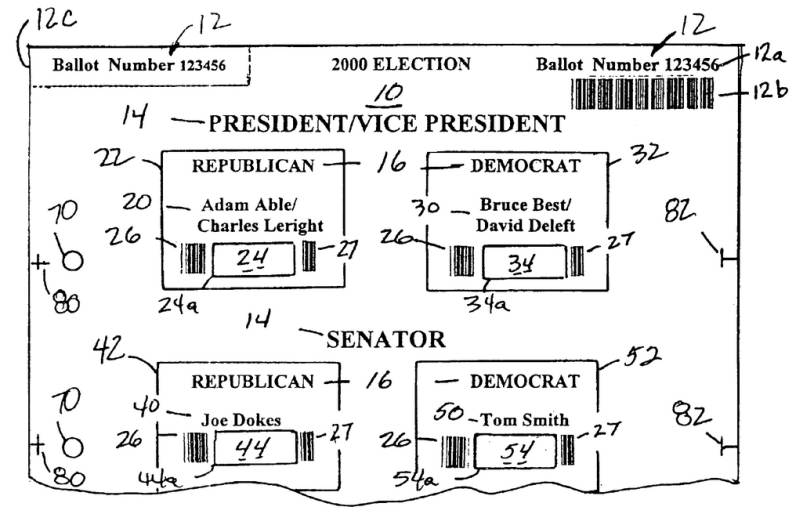 Researching Chaum’s patent portfolio is not something you want to undertake lightly; he’s a very busy person and has patents covering huge swaths of digital cash and secret-splitting, as well. That makes sense, because they’re all related problems. Chaum’s digital cash systems, and his voting systems, are typical of cryptographers: they don’t have the most attractive and simple user interface, but that’s a matter of overall system design: his cryptography is genial. I just sort of picked the illustrative patents at random, that one dating from 2009, but Chaum appears to have focused his attention on voting following the 2000 election, for some reason.

I’m quite sure that Chaum wants a great deal of money to license his patents. He wanted so much money for the digital cash patents that the online payments industry evolved into an ass-backwards mess of SSL, passwords, and credit cards – though the threat of anonymous digital cash, like bitcoin before bitcoin, may have terrified governments. But given the amount of taxpayers’ money that appears to have been thrown at voting machines in the US, it seems like it would have been a good idea to just offer Chaum the cost of one engine for an F-35, or something. Here is a radical idea: with $3.5 billion of the taxpayer’s money, the EAC should have decided that voting machines are a part of critical infrastructure that the government should develop, control the development and management of, and provide a baseline standard system that works, immediately centralizes the data (using reliable delivery and cross-counting) and so forth. They could have hired a bunch of engineers, had them build it, had the NSA validate the implementation, red-teamed the hell out of it, developed a standard deployment doctrine and certification, and …

Gosh, then we wouldn’t “need” gerrymander-able districts, or electors or representatives. The problem is that only the “right” people are allowed to tamper with the US vote. The problem is political hacks not Russian hackers.

Hey, America, stop trying to blame the Russians for your failures. 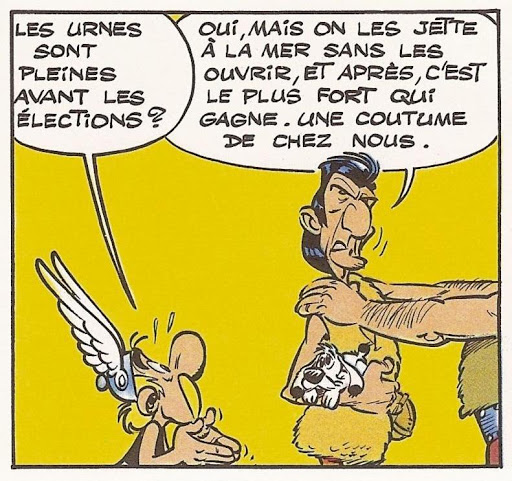 I grew up reading Asterix comic books, and the whole time I was writing this, I kept remembering the bit from “Asterix in Corsica” where they talk about voting: the candidate chieftans collect urns full of votes, then have a knife-fight to see who wins. At one point, two leaders are squaring off to fight and someone plaintively asks, “quelq’un a une urne pleine?” (Does anyone have a full ballot-box?) I tried to find an image of that scene to decorate this posting, but couldn’t. I wonder if that book of Asterix got suppressed – Asterix is basically one great big ethnic joke. (I didn’t realize that when I was 11!)

Asterix: “The ballot boxes (urns) are full before the elections?”

Corsican: “Yes, but we throw them in the sea without opening them, and afterwards it’s the strongest who wins. It’s the custom where I come from.”

(* One problem: the the NSA farms Cisco exploits. So the Russians might not be able to get into the VPN, but the US intelligence community, could. Of course, the exploits leaked; thanks, NSA. I guess maybe it’s better to use dedicated links and trust the phone company, hahahahaha.  )