While chemistry was being invented, anaesthesia was also invented, rather by accident – with great effect on art. Priestly was busy discovering oxygen at that time and the scientists of the day were unhindered by concerns about human subjects boards, lawsuits, or comprehension of what they were doing.

Davy’s experimental approach appears to have been to produce bags of various gasses, then he inhaled them to see what they did. Lucky for him, he didn’t manage to get a big lungful of nitrogen or cyanide.

One of the gases Davy tried was nitrous oxide. Those big balloons they used to sell at Grateful Dead concerts? That stuff. 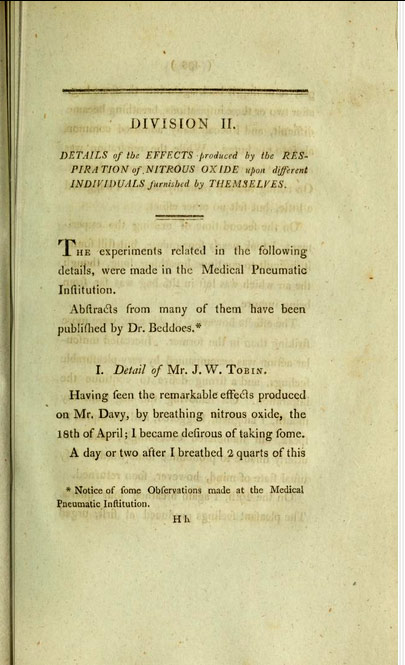 Davy’s text: “Researches, chemical and philosophical : chiefly concerning nitrous oxide, or diphlogisticated nitrous air, and its respiration” includes 600 pages of details about production and discovery of the “most excellent gas” and its effects on various people who tried it.

Usually, when people talk about Davy and N2O they stop there, and maybe segue into Beddowes, who realized that it could have benefits as an anaesthetic. Prior to Beddowes, if you needed a painful surgery performed, you had two options: 1) get really drunk and suffer it  2) not get really drunk and suffer it. With N2O you could knock someone out and apparently block their short-term to long-term memory uptake for a brief period – the subject would forget experiencing having their tooth yanked (or whatever)   It seems fairly miraculous, to me, that nobody was killed in this manner.

Davy did some things that were outright foolhardy: he caused to have constructed a private gas-chamber, in which he could sit and trip balls while having nitrous oxide pumped in. Nowadays we’d understand that as the CO2 level in the chamber built up, he’d suffocate. One of the analgesic properties of N2O is that you might be so cheerfully wasted that you don’t notice you’re dying until you pass out – and then it’s too late.

Beddowes had some crazy adventures with nitrous – he raised money from Josiah Wedgewood (grandfather of Charles Darwin and early anti-slaver) and founded the “Pneumatic Institution for Inhalation Gas Therapy” – which sounds suspiciously like “personal stoner palace” to me. This was about 50 years before the introduction of opium to England, so N2O really was a significant step forward in surgical pain-management. Scientists also experimented with knocking themselves (and Queen Victoria!) out with chloroform and ether. Nitrous Oxide doesn’t give the kind of agonizing headaches you get with those two substances, so it’s still in use as a quick way to knock a patient out gently.

It was also a significant step forward in party drugs. And that’s where we come to the romantic poets and others. 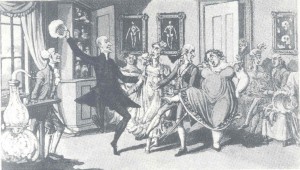 It became a popular demonstration of science’s power for travelling professors to give guests a couple big huffs on a nitrous bag. Speaking from personal experience, it must have been mind-blowing indeed for someone who didn’t grow up with the understanding that drugs exist. You go from feeling normal to feeling like you’ve drunk 1/2 bottle of tequila, in the space of a breath. Powerful and often memorable hallucinations result. Frequently they are fragmentary. Many people who have huffed nitrous will describe having an important idea that eluded them, like a word on the tip of the tongue. My personal interpretation of what’s happening is that they are experiencing the hallucination of having an idea: we know what having a good idea feels like, and we just experienced the feeling, without actually having the idea.

As an aside, during my days of self-experimentation, I also experienced passing out from the gas, which often results in the perception of the “glowing tunnel” that many believers identify as the passage to heaven in near death experiences. In one memorable case, I saw the glowing tunnel and all that, and at the end of it was a Rammstein concert and Amy Lee was on stage with Till and it was awesome. Therefore, god is real and if you think you’re going to heaven, take your earplugs and wear your Doc Martens’.

Tripping appears to have an effect of “opening minds” – by which I mean that having your brains scrambled just a little bit makes you more comfortable with intuitive leaps that may result as a side effect of ordinary “brain fart” or partial-dreaming. When I discovered about Davy and Beddowes I immediately wished I had a better understanding of the degree to which “trip think” may have improved/affected/distracted early victorian science.

Because, it certainly did.*

I haven’t managed to come up with a canonical list of romantic poets that tripped on nitrous, but at the very least we have:

That’s an impressive list, right there. I got started on this thread back in the late 1990s or so, when I was high on nitrous and a fragment of “Xanadu” popped into my head and I immediately thought it sounded like a fragment of trip-think brought back by a fast pen. At the time, search engines didn’t include full texts of books such as the Davy book, so it’s been a low-level research interest of mine.

“Then I first inspired the nitrous oxide, I felt a highly pleasurable sensation of warmth over my whole frame, resembling that which I remember once to have experienced after returning from a walk in the snow into a warm room. The only motion which I felt inclined to make, was that of laughing at those who were looking at me.”

After another trip, Coleridge apparently concluded that the material world was only an illusion projected by the mind. From your pen to buddha’s ear, Samuel!

The one I thought most interesting was not a rock-and-roll romantic poet, but rather a philosopher: 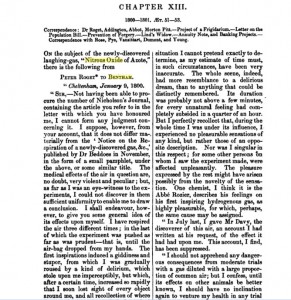 We can’t be sure of how much experience Jeremy Bentham may have had with tripping. That Peter Roget guy who’s writing Bentham about it? He’s the guy who wrote the thesaurus.

Bentham was one of the inspirations of utilitarianism, a branch of ethics that was further fleshed out popularized by John Stuart Mill. I have no basis on which to anchor this, but Bentham’s philosophy, of reflexively looking at situations from others’ perspective in order to achieve fairness, as well as his rather odd idea of having himself preserved and stuffed – that’s pure trip-think. Bentham was also deeply fascinated by surveillance culture, and invented the panopticon – sounds like he had a bad case of the ‘noids.

Victorian drug use in the arts

Romantic poets write about their experience with laughing gas

William James was also a tripfiend

(* In a future posting, I hope to go into the effects opium had on the arts in the 1890s. Dickens, Stoker, Rosetti, Browning, and the entire French dadaist movement were pretty much fuelled by opium)