A few months ago I mistakenly grabbed a box of “light butter” instead of regular butter. Since I was using it as an ingredient in popovers, it completely ruined my breakfast. “What is this evil substance?”, you wonder.

My history with butter substitutes goes back to when my grandparents and parents started using margarine in the 1970s. Margarine was one of those food products that marketing foisted on people as “healthier” (for unspecified reasons) than butter. And good consumers bought the stuff like crazy. Me? I put jam on my bread, instead.

What Is This Stuff? 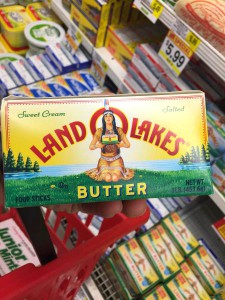 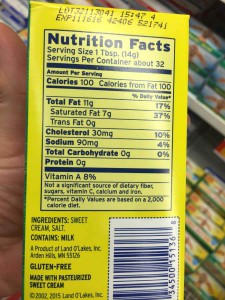 100 kCal/Tbsp – it’s practically metric. This is going to be easy. The salt has no food value; the calories are 100% from the cream. Now let’s look at the light butter: 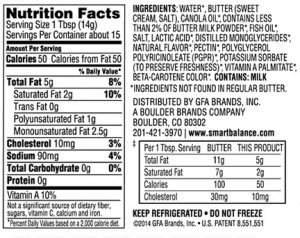 Ingredients are: Water, butter. Note the calorie count: 50 kCal/tbsp – exactly half of the real butter.

Hypothesis: It’s butter, cut with half water, sold at the same price.

Supporting that hypothesis is the warning: DO NOT FREEZE. Why not? Because it’s an emulsion and it’s going to break apart into water and soggy butter foam if you freeze it. Butter, being fat, is going to freeze and thaw just fine. Also supporting that hypothesis is that fat, in the presence of water, becomes a good home for bacteria. Unlike real butter – which will more or less keep forever as long as you keep it away from air and water – this stuff will rot. When the Vasa was raised from Stockholm Harbor after sitting on the bottom from August 1628 until April 1961, they discovered sealed tubs of perfectly edible butter in her hold. So: that’s another point in favor of butter.

Returning to our analysis of ingredients: the light butter has 5g of fat, the real butter has 11g. That also aligns with our hypothesis that the light butter is slightly more than 50% water. It’s slightly less than 50% butter, too, to make room for the canola oil, fish oil, polysorbate (which is not merely “to preserve freshness” it’s also an industrial surfactant that doubtless comes in handy in emulsifying all that stuff with the butter and water).

The final evidence supporting the hypothesis that light butter is just water and (mostly) butter is the way it ruins your breakfast: try frying some eggs in this shit and what you’ll see is a great deal of steam coming up off your pan. By the time the steam is gone, you’ll be able to fry your eggs. But if you’re trying to bake with this stuff, you’ve significantly increased the water content of your recipe and you’re going to wind up with bricks of fail.

My first encounter with this substance was a decade ago, in which I had one of the worst meals of my life, which heavily depended on “I Can’t Believe It’s Not Butter” as an ingredient. 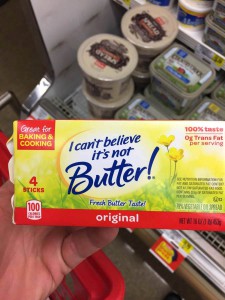 If you try to feed me this I will hurt you

This is the “Original” formulation. I fear the Advanced formulations, I really do. Note that it has “Fresh Butter Taste!”  It’s 75% vegetable oil spread: the rest is probably water and/or butter, right? 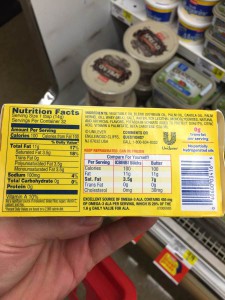 You knew what was coming

Well, it’s not butter blended with water. It’s margarine blended with water. Here’s what’s interesting: it manages to have the same caloric value per serving as actual butter. Without being butter! Who’d’a thought that palm kernel oil, and soybean oil, and coconut oil, plus … water and milk – could, well, it doesn’t taste very much like butter at all, actually. I have no trouble believing it’s not butter because it tastes like crap. But at least it’s just as fattening and – if I’m a vegan – it’s still got milk in it to make sure it’s off the menu.

“Great for baking and cooking”? Uh, no. If you’re making a recipe that calls for corn/soybean oil and water, I suppose you could use this stuff as a substitute. But if you’re baking anything that’s even slightly water-sensitive, it’s going to ruin it. If you’re inclined to waste some money, take a bit of “ICBINB” and put it in a frying pan on high and watch what it does. Then do the same thing with butter.

What blows my mind about this glarp is that people cheerfully accept the “light” packaging and use it, without thinking for a fraction of a second whether the claims are anything other than literally true. Marketing assholes would not hesitate to sell you a product as “low sodium” if it dropped from 9g/tbsp of sodium down to 8.9g/tbsp. Oh, no! Shall we look at “low sodium salt” next?

We see this all the time, marketing weasels push a product like gummi bears as “low sodium” and “gluten free” – well, I totally expect my pure sugar candy to be gluten free, as long as the GMO gnomes haven’t devided to make a transgenic version of sugar that has gluten in it (in which case, why not just put wheat paste in the sugar candy and be done with it?)  Another trick you’ll notice is the “ICBINB” has zero trans-fats. So does fucking butter. In other words: We’ve bent over backwards to produce something that’s just as fattening as butter, with all the sodium and calories, but it tastes faintly like bat guano and will ruin your baking.

Here are my suggestions:

If you care about your calories and sodium, use half as much butter.

If you’re baking, say, cornbread, use the amount of butter the recipe calls for, and just eat half as much.

PS – the Land O’ Lakes is for illustrative purposes only. Use KerryGold or President. There is a significant flavor difference between imported butters and the wisconsin butter food product stuff.