Politics is probably the dominant field of surrealist comedy, since economics tends to be a bit less accessible for the common audience.

In 1973 René Viénet produced a delightful feature-length movie “Can Dialectics Break Bricks” in which he (and others) did voiceovers on a bad martial arts movie. 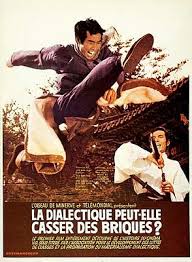 By overlaying the underlying conflict and drama (such as there was) in the movie with political cant, he made it kind of funny. 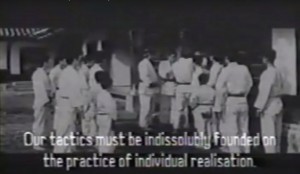 The villains, of course, are reactionaries supporting the corporate interests against the collective workers. It’s a jargon extravaganza that has moments that will make you laugh out loud.

The only problem is: those moments are few and far between. 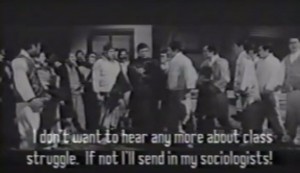 Send in the sociologists!

It’s sort of Monty Pythonesque. “Poke him with the soft cushions!”

I love the occasional tidbits like threatening to send in a sociologist.

Which reminds me of a joke.

One day, after decades of quiet work in a department of some agency of the British government, a civil servant walks in to their supervisor’s office, sits down, and announces, “That’s IT! I have finally lost my temper and I am HERE to COMPLAIN!”   The supervisor is taken aback and says, “Dear me, what is the matter?”   “I’ve been a solid performer for twenty years and I am afraid that my career here has been held back because I am a socialist.”  The supervisor stops polishing their glasses and looks up, startled, then pulls a manila folder out of their desk and examines it, flipping through a few pages, “Oh, dear me. There has been a terrible mistake. We thought you were a sociologist.”

Chocolate Rage » « I Can’t Believe It’s Not Whatever