I obtained a copy of the classic text by Paul Popenoe, published in 1918 by McMillan. Unfortunately, original editions don’t appear often on Ebay and I thought that it’d be better to spend my money on nerd toys instead of obtaining a beautiful old printing of an ugly old book.

When you want bad propaganda in the service of pseudoscience, this book delivers!! 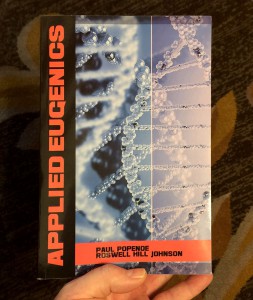 From the very first sentence onward, it gets it wrong, and then gets wronger. You are probably thinking “hyperbole!”  No, really, check this out:

The Great War has caused a vast destruction of the sounder portion of the belligerent peoples and it is certain that in the next generation the progeny of their weaker members will constitute a much larger proportion of the whole than would have been the case if the War had not occurred.

The author appears to be saying that all the good genetic material got itself blown to mush in Flanders fields where the poppies grow, and the weak cowards stayed behind to breed, breed, breed. But….  What if it was the stupid authoritarian followers that went off to fight and die, while their smarter and wiser opposites stayed home to breed? I don’t believe there is such a stat as “Wisdom” in humans but, if there were, the overall Wisdom of big populations of humanity might have gone up when the cannon started roaring. The author does not appear to realize that selection pressure doesn’t always work in the way that you, with your toxic masculinity(tm), think is “best.”

This is really a fascinating error (especially for a first sentence!) because it shows that the author is not even applying his own pseudoscientific theory correctly.

You can find your own howlers here: Popenoe on Project Gutenberg.

I Can’t Believe It’s Not Whatever » « Propaganda – Introduction