(Reuters) – A new law went into effect in Texas on Monday that allows certain students to bring guns into classrooms, with supporters saying it could prevent mass shootings and critics saying the measure will endanger safety on campuses.

The so-called state “campus carry” law allows people 21 and older with a concealed handgun license to carry pistols in classrooms and buildings throughout public colleges, including the University of Texas system, one of the nation’s largest with an enrollment of more than 214,000 students. 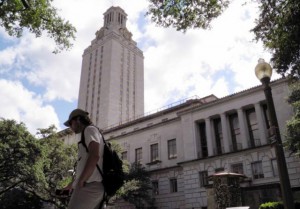 A student walks at the University of Texas campus in Austin, Texas, U.S. on June 23, 2016. REUTERS/Jon Herskovitz/File Photo

The tower in the background is the tower from which Charles Whitman, in 1966, shot and killed 16 people. You don’t need to look at the picture very long to discern the hidden message. Whoever chose that picture for the Reuters piece was being subtle. But I have a vivid memory for images, and I remember seeing that tower, when I was a kid, on the front of newspapers.

But the despicable creeps who passed the law have another message for you: they timed the passage of the bill for the 50th anniversary of the mass murder. What kind of minds are you producing, Texas!?

Texas Governor Greg Abbott, a Republican who supports campus carry, said a gunman could already bring a firearm on to campus, and the law could prevent mass shootings because someone with a licensed concealed weapon could be ready to confront a gunman.

Texas Governor Greg Abbot is clearly a profoundly clueless human being, who thinks that someone with a handgun is going to, what, shoot a sniper 300 feet up in a tower? Apparently he’s been playing too much Call Of Duty, or maybe he’s just got the NRA’s hand up his anus, and they’re using him like a floppy sort of meat sockpuppet.

Does Governor Abbot think he’s clever? When I think about his thought process, I feel like I just stepped barefoot on some dogshit and it’s squeezing up between my toes. I feel an irresistable urge to bathe.

Propaganda – Introduction » « What Do You Mean “We Don’t Know What We Did With The Money?!?!?”