As we charge forward to the quadrennial “Changing Of The Oligarchy” ritual, one topic that remains off the talking points is: ‘defense’ spending. Some candidates favor spending vastly more, others slightly less, but none of them appear to be serious about adjusting the money-valve from the ‘full on, locked’ position. 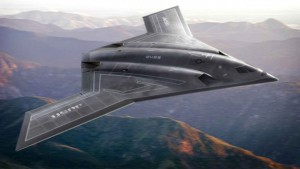 Defense spending is a zero-sum game: money funnelled to defense contractors is money not spent on education, social programs, or infrastructure. Congress enacts a bizzare form of butoh dance in which it wrings its hands about how there isn’t enough money for – well, for pretty much anything, while simultaneously purchasing under-performing, unreliable, overpriced, behind schedule advanced high-tech boondoggles.

Take, for example, one of the government’s great defense boondoggles: $65 billion dollars, annually, spent with extreme care and under intense scrutiny. Oh, oops – that was the Department of Education’s Budget. My mistake. Take, instead, the B-2 strike bomber, which absorbed at least $44 billion dollars and was pretty much un-needed: most of the bombing the US has done in the last decade has been using Vietnam-era B-52s. But, as Congress would tell you, the Department Of Education can Kiss Their Ass because the Air Force needs a bigger better boondoggle than the B-2, the B-21. The B-21  will  certainly cost the taxpayers much more than the Department of Education, because: reasons. Most of those reasons being: the B-2 isn’t really very good.

During the remainder of this change of oligarchs cycle, listen carefully and see if you hear anyone saying anything about telling the Air Force to have a bake sale because there really isn’t a purpose for the B-2, let alone the B-21.

That’s the crazy part about the whole thing: the Department of Education spends its money and has an open budget; it’s not really possible to lift a billion from the faculty coffee machine budget* and spend it on books, instead. That’d be illegal.  But not if it’s the Pentagon. The Pentagon does that kind of maneuver all the time – except they’re not lifting a billion from the air conditioning budget for Afghanistan ** – they’re lifting many times that, euphemizing it as “reprogramming of dod appropriations.” What that means is: “we told Congress we were buying a this but instead we bought a that but it’s classified.” In Department of Education terms this would be as if the DOE was able to appropriate $50 billion for the faculty coffee machine budget, then used that money to buy schoolbooks and pencils and A/V systems and computers with the money. If the DOE did that, there would be hell to pay. When the Pentagon does it, it’s just how things are done.

So, someone had an idea of getting the Pentagon to account for how it spent the couple trillion dollars it blew through during the Iraq war, Afghanistan war, Libya war, wars in Africa, and other wars we don’t know about.***

The “Audit The Pentagon” bill of 2015 requires that the Pentagon present audit results of how it spent the taxpayers’ money, and ties future reallocation to completing the audit. Read that back: you guys can’t shuffle around more money until you tell us how you shuffled around the money we already gave you. Sounds good, except that under legislation passed in 1990 the Pentagon is already required to be able to audit its books by 2017. The Pentagon’s response: “it can’t be done.”

I’m joking. The Pentagon didn’t say “it can’t be done.” They said “kiss my ass.” I’m not joking about that; that is basically what the Pentagon said.

When you encounter someone who claims to be “liberal but fiscally conservative” you can ask them why their conservatism doesn’t appear to extend to fraud, waste, and abuse in the Pentagon budget, or funds reprogramming, or the fact that the Pentagon apparently just can’t handle money.

Let’s not even talk about the “black budgets” – the classified ones. How do you audit a classified budget? Think there’s any fraud, waste, and abuse going on in those?

The US spends more on its military than the rest of the world, combined. When you factor out NATO countries, it works out to the US spending 10 times more on its military than any of the countries that we are remotely likely to go to war with. Germany, for example, spends a goodly sum, but we’re not likely to go to war with them again any time soon.

Let me put that in some perspective for you: during the Gulf War, the $500 billion/year US military managed to defeat the Iraqi $4 billion/year military.

Think about the strategic dynamics of the Iraq war: the US had uncontested control of the air, and wisely spent months bombing every formed unit of Iraqi military, then semi-competently invaded and swept up what was left. 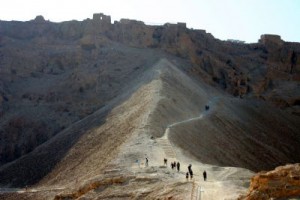 When the Roman Tenth Legion besieged Masada in 73AD, they used all the labor in the surrounding area to build a massive dirt ramp that could support siege machines that overtopped the wall. The way the US Pentagon does things, they would have used bags of money.

US society is increasingly unequal: fewer people have more of the wealth than ever before, and the greatest economy in the world is spending a ridiculous percentage of its GDP on its military. 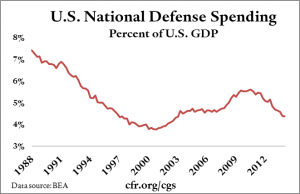 Meanwhile, social programs, which equate to social mobility, are being cut back.

One consequence – a particularly dire consequence – is that serving in the military has become one of the few remaining solid vectors of social mobility: It’s a trap. The military dangles education, on-the-job training (if you figure out what civilian job being a sniper qualifies you for, please tell me!) medical care – all the social services that many a more reasonable nation provides to its citizens as a matter of course. The wealthy’s kids continue to go to Princeton and Harvard because their parents’ names are on the endowment, while everyone else gets to hock their immortal souls with student debt.

If you’re poor, American society dangles the opportunity before you of becoming a janissary for the empire: if you survive the training accidents, IEDs, equipment malfunctions, boredom, PTSD and drugs – you may limp into the middle class.

Here’s What I Don’t Understand:

If the Pentagon doesn’t know how it’s spending our money, why is it always sure it needs more?

(* Because there isn’t one)

(** In 2011, the Pentagon appears to have spent $20 billion on air conditioning in Iraq and Afghanistan I have trouble believing that, to be honest: that’s 1/3 of the budget of the Department of Education…)

(*** The Libya war was no “boots on the ground” but they dropped $1b worth of munitions on people. The non-war against ISIS is costing at least $15b so far)

I See What You Did There!! » « Monday Meslier: 51 – It Is Not True That The Object Of The Formation Of The Universe is to Render Men Happy