“We should outlaw teleprompters … for anybody running for president” – Donald Trump

Cicero said Demosthenes “stood alone among the orators” and he may have been right. As a youth, Demosthenes had mild speech impediments, which he overcame by practicing 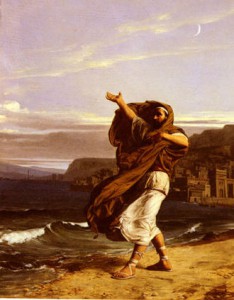 Demosthenes practicing oratory on the beach

his oratory as he ran, or orating with pebbles in his mouth. One can almost picture Demosthenes, Rocky-like, running up the steps of the museum in Philadelphia, while orating his refutation of some political point or other.
Demosthenes also sold his art for money, as a logographer – a speechwriter – or speaking on other people’s behalf, as a sort of “stunt double” speaker.  Imagine if George W. Bush, during one of the presidential debates, had stepped back from the podium and said, “Now, to present my views: Demosthenes of Athens!” And the great orator held the audience in his hand for a second, then dropped them into Bush’s pocket.

Does that little scenario sort of bother you?

And here’s why: we value oratory. We value a person who is articulate and who gives a great speech. Shakespeare’s amazing oratory still makes us shiver and Frederick Douglass’ speeches are still powerful enough to change people’s lives. I’m not sure what’s going on in the process of swaying a person by rhetoric and oratory, but that’s what it’s for: the speaker uses the passion of their delivery and the beauty of their words to sway the listener. I don’t want to risk being mistaken for an evolutionary psychologist, but maybe there’s some built-in behavior in people where we have a critical period in which we listen to our parents, and passionate and beautiful delivery taps into that instinct. I used to work with a guy who was deeply religious and was used to listening to modern southern baptist-style sermons, and I discovered that if I adopted a sermonic rythm in my speech I could convince him of nearly anything.

If we value something, and we act based on our valuing it, we are being cheated if that thing is misrepresented

Richard Feynman would say that’s marketing. He once referred to marketing as one of the few inherently immoral professions because in order to do it, you have to sell something as better than you know it to be. Marketing people may cry “unfair” at this characterization, but if you think that’s bad, try Bill Hicks’.*

If you didn’t feel Bush would have been cheating if he brought Demosthenes up to deliver his argument, would you feel Bush was cheating if Demosthenes wrote the argument, and delivered it? In which case, you know, Bush would be just like some kind of sock-puppet gaining credibility and stature based on his ability to hire a great orator.** Let’s continue with our experimental scenarios: what if a political candidate stood up at the podium and said “I’ve posted my working group’s ideas on our website. Go read them. Kthx.”  Then we’d probably still expect them to be well-written, clear and articulate. I’ve worked in various executive roles long enough to realize that a bad idea, passionately and articulately delivered, will always beat a brilliant idea delivered in a mumble.

I find myself in the odd position of agreeing with Donald Trump about something: “We should outlaw 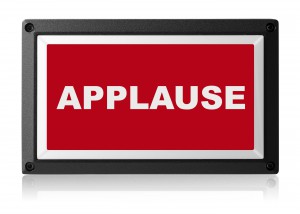 teleprompters … for anybody running for president”  Because the teleprompter attempts to hide, it is therefore acknowledging it’s deceptive. When we watch Kenneth Branagh performing Shakespeare’s lines, we are not admiring Branagh for being Shakespeare, we are admiring Branagh’s performance. When we watch a political speech, how many people are aware that it’s a performance? If you really want to contextualize modern political speechifying it would be more like: “And now, to read the speech written by my writer room, Demosthenes of Athens!” (loud applause from the studio audience because the “applause” light comes on). The difference between theater and politics is that we know theater is theater. Most people don’t realize they are both theater.

“Bad performance by Crooked Hillary Clinton! Reading poorly from the telepromter! She doesn’t even look presidential!”

So What Should We Do?

I consider speech-writers, writing rooms, teleprompters, and the other accoutrements of false oratory to be marketing: presenting the product as better than it is known to be. It’s a performance-enhancing drug and it’s had exactly the same effect on politics as performance-enhancing drugs do in sports: if you’re not cheating as well as everyone else, you don’t have a chance.

It’s too late to try to fix it. Oratory is dead.

We should assume that when a public figure is speechifying that they’re a hollywood special effect, an internet banner-ad, put up to manipulate us. Nothing more.

Once we acknowledge that the words of politicians are merely an artifact, and not necessarily anything they believe in, we are free to recognize them as such: performances. Which means that, like the words of Shakespeare, we can assess the performer and the writer separately.

(*I agree with Hicks)

(** This is also why we are unimpressed with Milo Yiannopolous, who had a “writer room” generating ‘his’ content. And they were mostly doing it ‘on spec’ – which is media for “unpaid”)

Monday Meslier: 205 – We Could Not Repeat Too Often How Extravagant and Fatal Religion Is » « No Tekken 7 Swimsuits in West Thanks to “SJWs”!!!!!