Fallout 76 has been occupying a fair amount of my time. In fact you could say my life is split evenly between crafts and gaming. If you had asked me a year ago what my ideal life was, I’d say it was this.

I’ve noticed some trends in the gaming world, which is that “base building” games are now popular. It makes sense – the tried and true way of getting a player to buy into their online world or character has been to allow them some customization. Then, what we saw in many games like World of Warcraft was that people would go to tremendous lengths to customize their characters. I don’t buy the facile view that it’s just a bunch of pixels, either – a lot of serious gamers are role-playing and it’s important to them, for their role-play, to be able to build a character that aligns with the back-story of the character. In WoW, we had the pandaria half-hill quests, character item transmogs, and eventually semi-custom bases (not custom enough!). And then there were games like Fallout 4 and Subnautica where building a base was an integral part of the game because it affected your in-game outcome. For example, in Subnautica I built an extremely deep base with a set of long habitrail-like tunnels that allowed me to get into some nasty parts of the map without having to make a risky voyage on foot in the prawn suit. Also, in Subnautica came the great pleasure of building out your submarine – either as a bachelor pad, art museum, pseudoscience lab, etc. I had as much fun building a sense of attachment to “The Sea Wossname” (my sub) as anything else in the game.

All of which brings me to the failure of Elite:Dangerous to accomplish one of the things David Braben pitched as part of the original gofundme campaign: walking around in our ships. Given the massive amount of code they wrote for stupid things that nobody liked (arena combat, power play, etc) I never accepted Frontier’s argument that “it would be hard.” Because, you know, a floor-plan editor, some standard multi-level floorplans, and a bunch of assets you can position – that’s hard? I spent much much time in ‘deep space’ exploring and had to imagine what the interior of M/V Longshot looked and smelled like after CMDR Surly Badger had been living in it for a month, throwing former pizza wrappers under the command chair because, who cares, he can have the port staff hose the cockpit out and detail it for a fraction of the millions of credits of exploration data he was carrying in the ship’s computer. All Frontier had to do was some hallways with big heaps of bins some reading “instant coffee” and others “frozen pizza” and I’d have cheerfully scrambled through the maze of hallways to periodically kick a jammed drone out of the dispenser, or whatever. What we’ve seen is that mini-games involving crafting and maintenance are fun so long as nobody is actually getting hurt. Frontier decided, for reasons that never made any sense to me, to turn Elite:Dangerous into a first-person shooter, brilliantly ignoring the fact that a lot of their gamer community had fled to space exploration and trading games in order to escape grindy first-person shooters full of sociopaths who want to pay to win or cheat to win, in order to shore up some very problematic, shallow, egos. 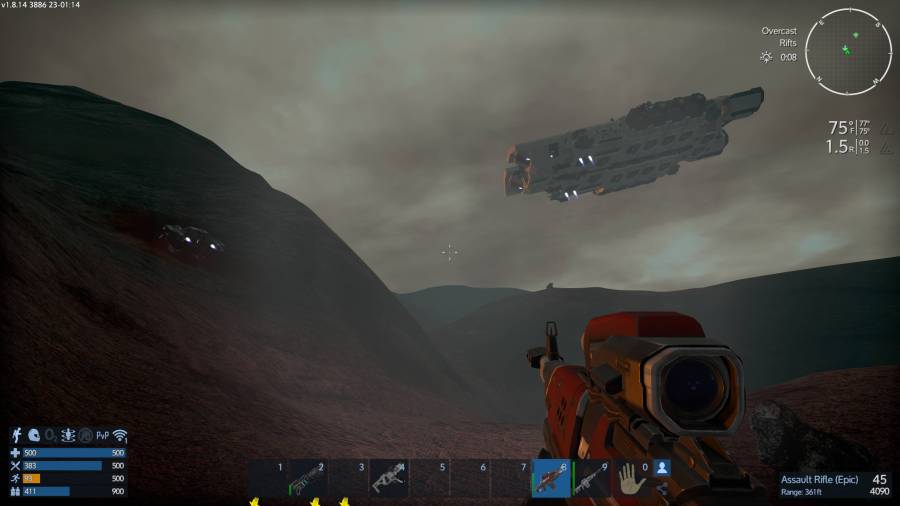 The Dun Moradin is parked in the air over the area I am mining. I got to the ground in the little ship to the left, the Shiv. I’m on the ground hunting for titanium.

Before I got into Fallout 76 I flirted hard with Empiriyon, Galactic Survival and I still believe it’s one of the greatest games that narrowly missed the mark. It’s got some really great elements but, unfortunately, the questing system is questionable, the game engine is sometimes shockingly bad, and the maps are repetitive and cheesy – which is a hard thing to do in a galaxy with a zillion suns. The problem is: they are all the same. But the basic plan of the game is: “all bases are made of blocks” and, in fact, “a ship is also made of blocks, its just some of them are engines and if enough of them are engines, it’ll fly!” If you’re patient, you can sit there and assemble a ship out of blocks and then it’s whatever you want – long corridors with shipping containers, or glass command bridges full of houseplants and art. Best of all (brilliant, why didn’t Frontier do this?!) you can design a ship and upload it to a shared blueprint pool and anyone else who likes the ship can collect the materials, throw them in a hopper, and wait a few hours and – boom! I did not design the Dun Moradin – someone else spent hours and hours making that ship look incredible and (best of all!) designed like an actual functioning trader warship. (as someone in E:D world once said: “a capital ship is a big gun, covered with little guns, and some engines) I used to feel like I was coming home to something, when I managed to claw my way into the hangar bay only to find that my houseplants had died because some zirax had punched a hole in the bridge window and let the air out. Empiriyon managed to effortlessly do what Frontier missed in Elite:Dangerous, which is sad but more importantly they showed that it could be done, and done very well.

And then there was Subnautica. That game didn’t have tons and tons of assets but they made you hunt for blueprints and suddenly that mattered. You get the blueprint for a coffee machine and suddenly my base looks like I actually live there. Ditto Fallout 4. I don’t want to name names but someone farmed lots of pretty cotton summer dresses and dressed all of their colonists in them. And top hats. Both genders; I’m not interested in people’s gender norms. I have pictures of that stuff elsewhere but I’m not going to load it off a hard drive right now. My bases in Fallout 76 are still modest so I won’t show those, either – but, again, Bethesda easily dusted Frontier by building in a whole mini-game where your builds are contingent on finding plans and blueprints, so you’re searching for money and plans and will pay anything to get the right one. For example, I am still looking for the glass greenhouse modules because I want to build a glassed-in outhouse, because.

So, I asked Midjourney to build me some Fallout 76 bases. And they came out pretty cool! 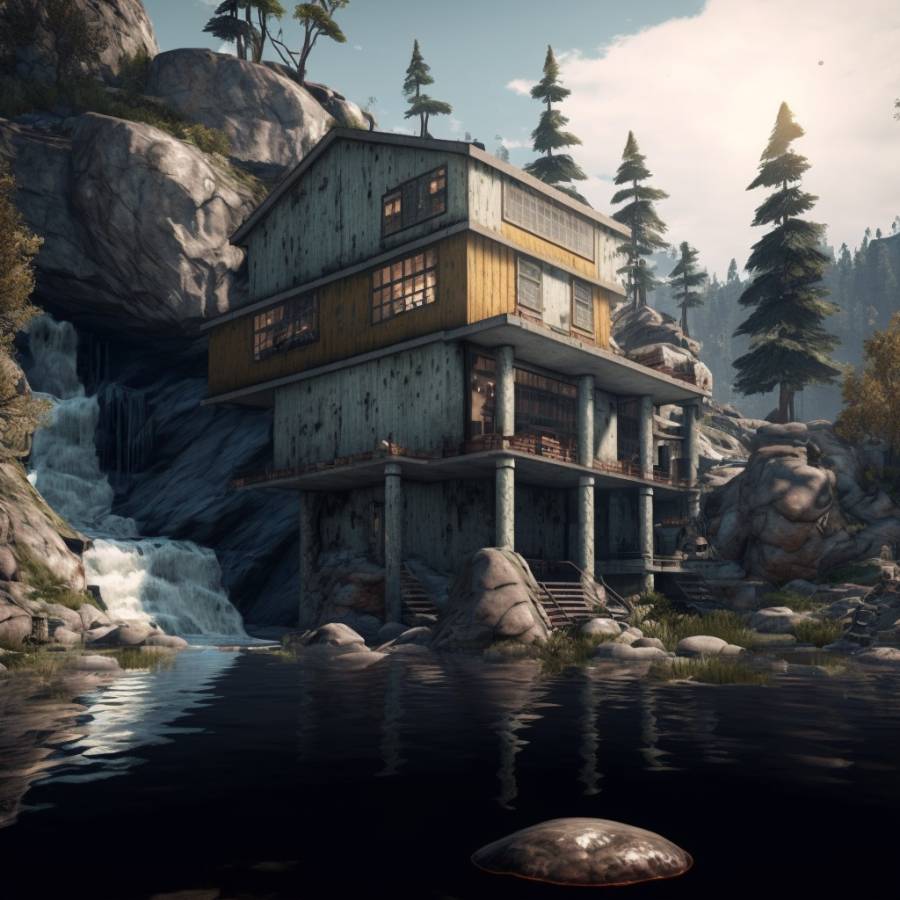 That would actually be buildable in-game, I am pretty sure. It’s not amazing, though. But, still, pretty cool! It’s better than this AI here has done so far. 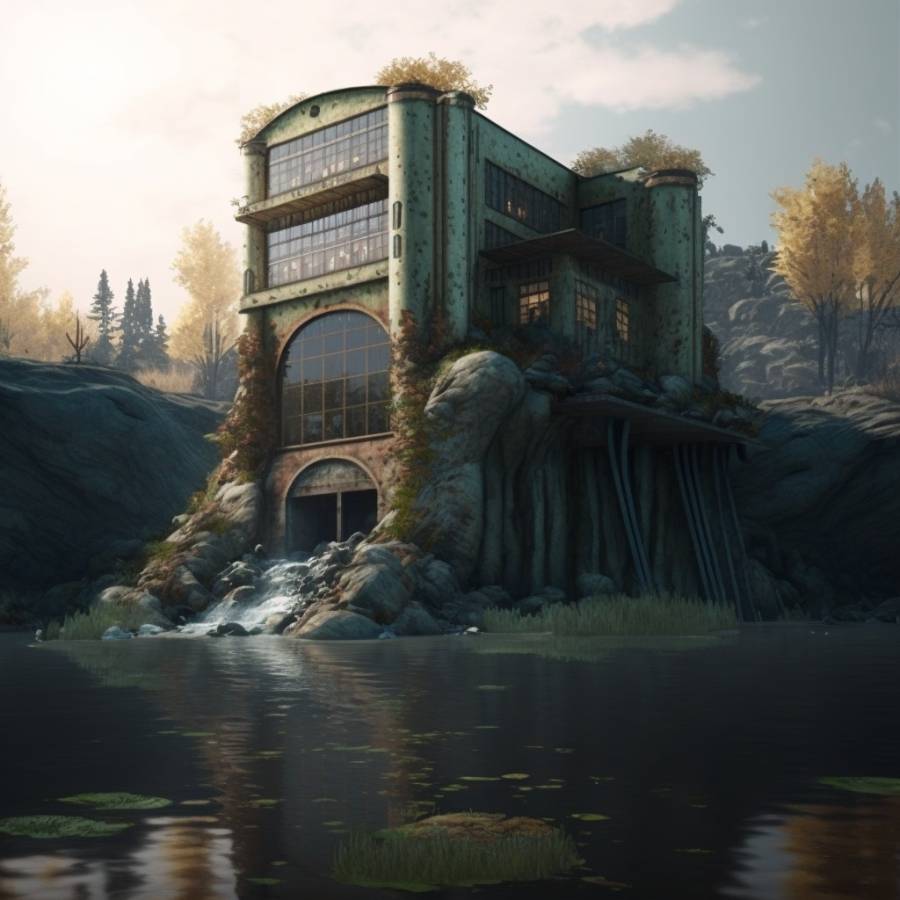 Midjourney AI and mjr, “a cool base built over top of a river”

I love the way Midjourney successfully apes the style of Bethesda’s art in Fallout. It’s remarkable and it makes me wish I could wander around inside that building. Or maybe own it, and put a few robo-gun turrets on the outside. After an hour or so of doing that, I thought to try a few other games, and gave Midjourney instructions to design Subnautica bases: 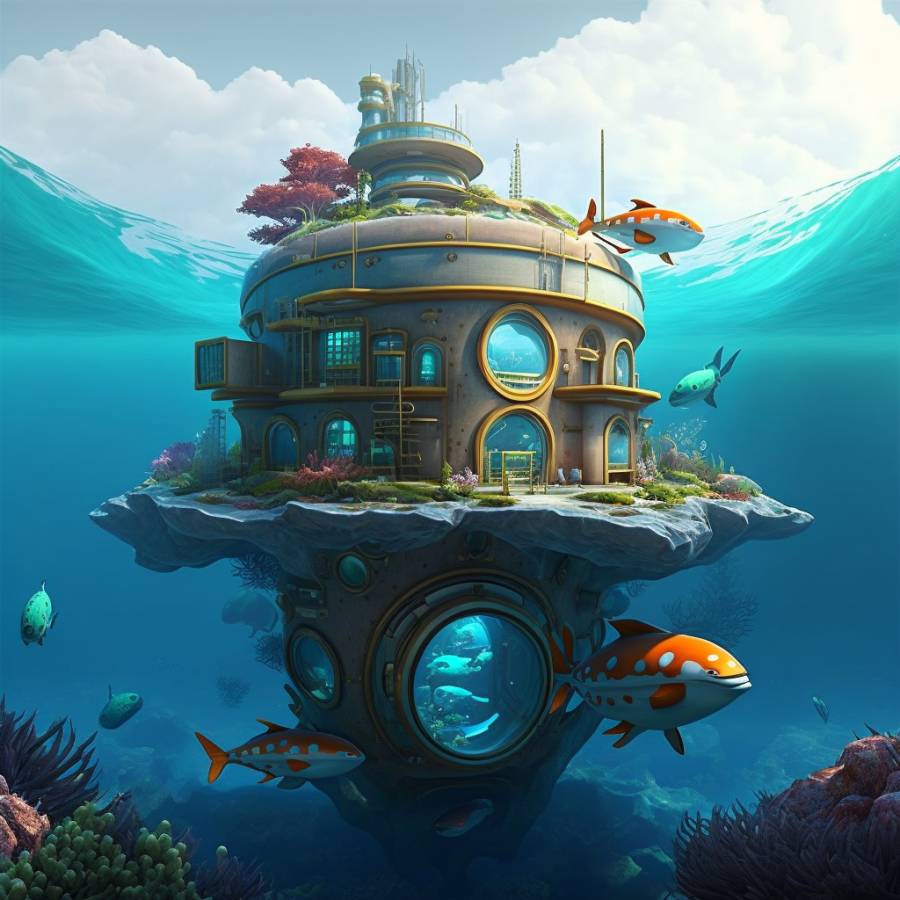 Midjourney AI and mjr: “subnautica base”

The color scheme in the Subnautica base actually tracks fairly well with the game! I guess that makes sense, since the game has a very distinctive look and there are tons of screenshots for the AI to feed from. 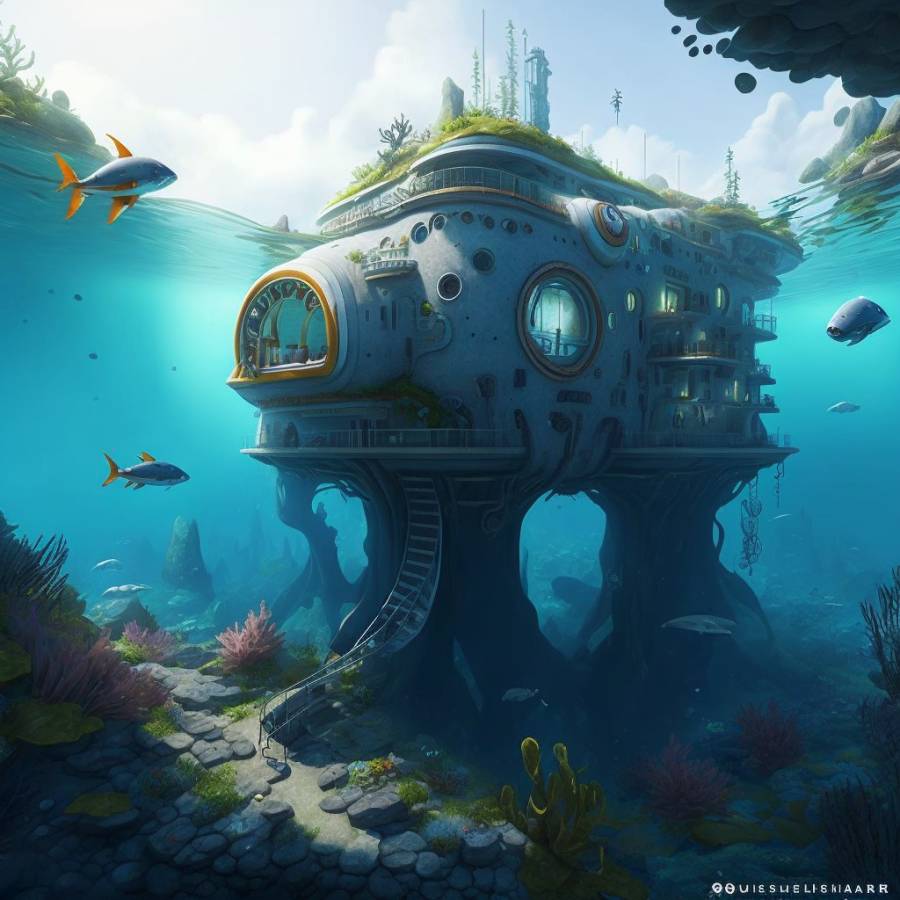 Midjourney AI and mjr: “subnautica base 2”

My general feeling in Subnautica as well as Fallout 4, and even Rimworld was, “I wish I could live in there.” Maybe not Rimworld because life there is about as messed up as it is here on Earth. Midjourney, by the way, didn’t do a bad job of bringing Rimworld bases to life: 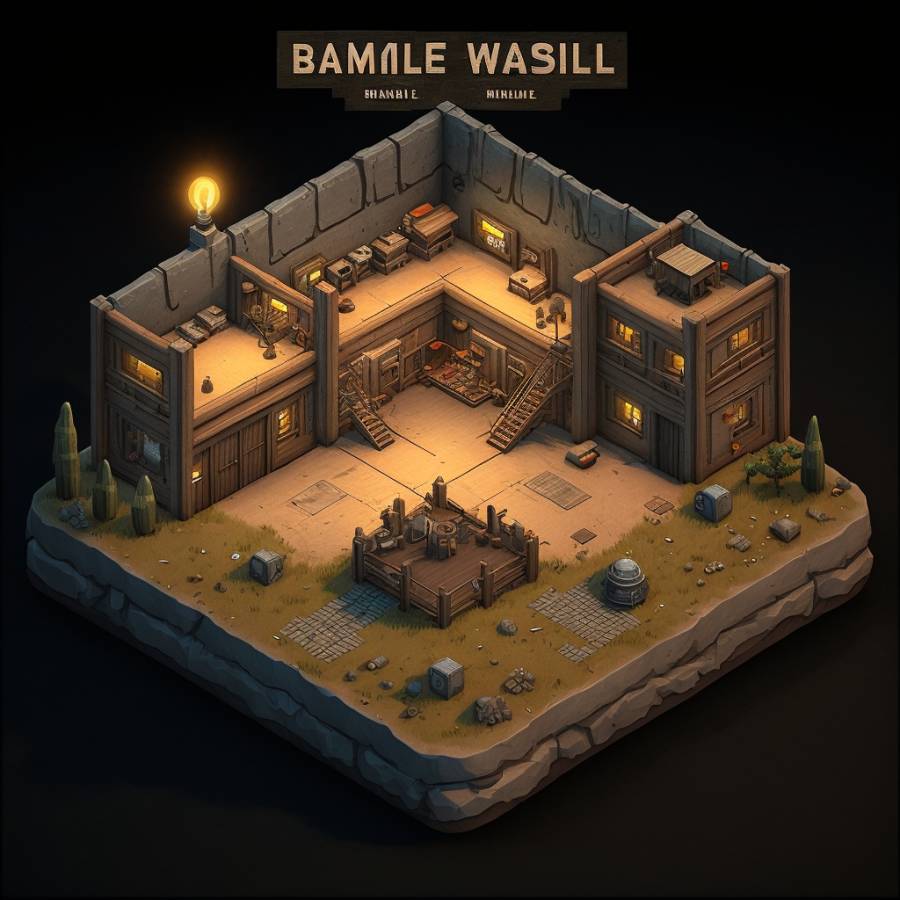 Midjourney AI and mjr: “rimworld base”

Given the cannibalism, massive bloody attacks from raiders, starvation, and fellow colonists going crazy, I do not wish to live in Rimworld. But if I could move to Dun Moradin and go far from human civilization, never to return, I’d be packing my stuff right now.  (To give a sense of scale: Dun Moradin is about 3 city blocks long and 6 stories high; there is room for a substantial amount of stuff on board) (An anaconda in Elite:Dangerous is about half that size and of course we have no idea about its interior layout because Frontier never figured out that a ship’s interior could be a small instance. Sad.

All these things are, in my view, giving gamers a chance to play with the least expensive and most fascinating form of creativity: infinite pixels. It’s stuff but it’s limitless stuff. And, if you think for a bit, you can go out somewhere, mine enough asteroids, and build a gigantic orbital base and a battleship. Why not? Who cares? There’s a point, here, which is that the people who wish to be left alone could fly 2,000 light years to someplace, find a nice ringed world with lots of metal and carbohydrates, and live out there until the frozen pizza and beer runs out. I sometimes pause to think of that, since the model of Empiriyon or Elite:Dangerous is that humans can fairly quickly build FTL-capable spacecraft and then you’re no longer beholden to anyone. Police want to talk to you? Good luck finding me. Tax man wants a cut of my ship’s cargo? What, huh, I’m on the other side of the galaxy. Want me to fight in your war? No thanks, I can make a war right here. FTL capable affordable space ships means the collapse of all governments that are unable to corral “their” people under a system of political control. I wonder if that ideology has subliminally infected gamer-bros and that’s why there’s a strong libertarian streak in the community. I’m not going to say “humans need other humans” because, FTL-capable spacecraft would allow humans to build exactly whatever size and type of community they want – but these are games. It’s OK to build your little art empire by ethnic cleansing all the super-mutants off a chunk of land, but in reality-land it’s more complicated than that. It seems to me as though techbro libertarians seem to want to forget the details, and it’s the details that mean other people’s survival and make our own lives worth living.

Subnautica had one mechanic I absolutely loved: battery management. You really needed to be pretty careful about batteries because if you were way down in a pit somewhere, and your batteries for your seamoth mini-sub died, you got to try to swim to the surface before your air ran out. Emergent gameplay! How fun!

Dun Morodin (pronounced “done maraudin'”) is a perfect ship for an ex-raider, who has gotten sick of the raiding lifestyle exemplified by the first-person shooter. One other note: the first time Dun Morodin was attacked by a non-player pirate ship, the ship’s automated guns had blown the engines and command bridge out of the pirate ship by the time I dropped whatever I was doing and raced through the ship’s corridors to the command bridge. There are echoes in that of Haldeman’s Forever War and C J Cherryh’s Downbelow Station books: space combat is something computers are very good at and your first indication you’ve been in a space engagement is you’re either an expanding dust-cloud, or you’ve won an epic victory.

A Tumbril Remark » « The Hot Cut