The game of tax avoidance is one of the corrupt scandals of the US’ ridiculous regime.

There are armies of tax advisors that you can hire, who will tell you cheerfully “tax avoidance is not the same as tax cheating – after all, it’s legal!” by which they mean there is a carefully constructed loophole in the tax code that they can help you drive a truck through. Depending on how “aggressive” your tax advisor is you can pay all/some or none of your tax debt and feel like a smart person for doing so. Remember when Donald Trump said loudly that hiring a good tax advisor was a sign that he’s smart? That’s basically the Gordon Gekko “greed is good” line from another angle – as my accountant used to say “a penny written off your taxes is 2/3 of a penny earned.” That’s true, depending on what tax bracket you’re in; if you’re Donald Trump and you’re not paying any taxes at all then a penny written off is a penny ‘earned.’

The way the game has been played is to figure out a clever way of putting a loophole in the tax code, then sneaking it past when nobody’s looking. Until the loophole is closed, rich people can get away without paying any taxes, at all. If they get caught, they may get a bill from the IRS and have to pay interest on the money, but generally that’s about it. What’s not allowed, and (unless you’re the president of the United States) is filing a fraudulent return – i.e.: you miss-state the value of ${whatever} in order to make it appear less valuable, then therefore the tax on it is reduced. It probably won’t shock you to know that this happens all the time it’s just a shocker for the president if someone starts sniffing at it.

The easiest form of flat-out fraudulent filing would be, suppose you buy a block of apartments for $1mn. 10 years later, they are now worth $10mn because property values went up, etc. When you file your taxes, you argue with the property tax assessment and say “no, they are worth only $3mn, because there are rats in the walls, asbestos, and leaks in the roof!” The local tax authorities might agree to split the difference with you – call it $5mn and you just saved a ton of money. So far, so good – nothing done is illegal – but then you go to get a loan and use those apartments as collateral, claiming that they are worth $15mn. Now, you’ve told the tax man one thing and your putative lender another; that is the fraud. The funny thing about that sort of fraud is that it’s really, really obvious in your tax filings and the loan documents – the whole thing relies on not being able to examine the two documents side-by-side. There are tons of variations on this simple scheme: I could let you live rent free in my penthouse apartment, where a normal person off the street would be expected to pay $5,000/month. In tax terms, I have just given you $60,000/year and you would owe taxes on that. But if I’m a fraudster, I keep two sets of books: one says the penthouse is $400/month and the other says it’s $5,000/month and now I am only giving you $6,000 taxable dollars – but then when I apply for a loan on the apartment bloc, I say that the penthouse is worth $60,000/year or maybe $100,000. 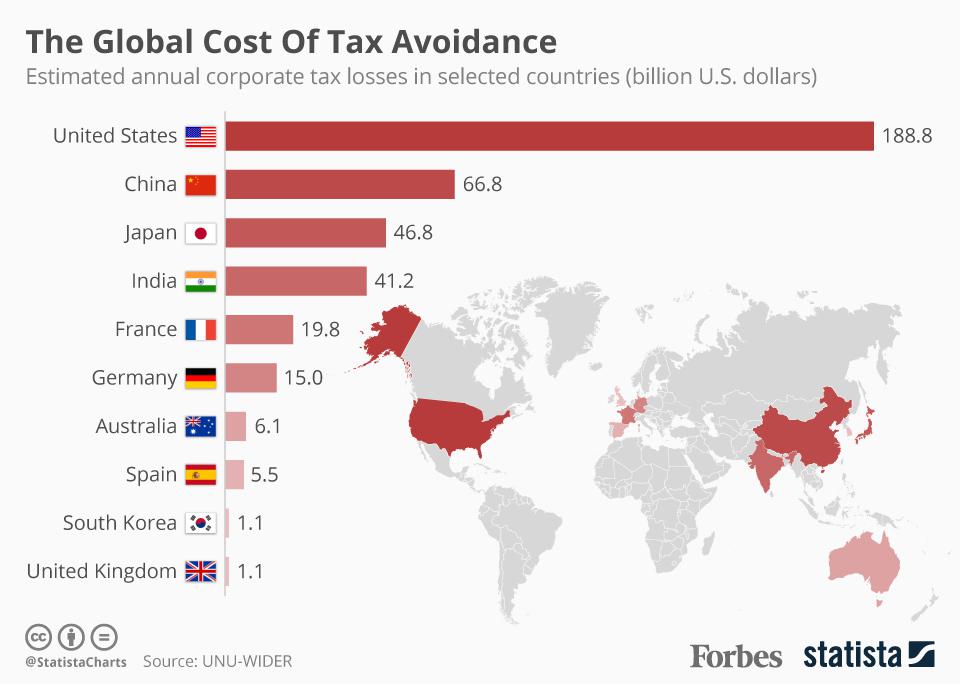 This ought to be a straightforward fraud to detect, except for two reasons: 1) the fraudster is going to leap through flaming hoops to keep the two documents from ever appearing in court and 2) the people responsible for prosecuting this stuff also do exactly the same thing so why on earth would they want to prosecute someone for doing it, it would completely wreck the game.

The craziest forms of tax avoidance are the ones that are designed to allow transfer of inter-generational wealth. There are tax lawyers who specialize entirely in that process, and they are constantly working to help their clients re-structure their finances so that they can pass on gigantic inheritances to their kids, without their kids paying taxes – “legally.” The way that the Trumps did it was basic flat-out fraud, but that’s another story; this is the currently hot “legal” way.

Let’s suppose I was an early investor in Tesla and I got insiders’ shares at founder’s prices: for the sake of this example, let’s assume they were more or less free – I paid Elon $1,000 or something for 100,000 shares back when the company was starting and Elon needed $1,000. I just made up that example but I looked at Tesla’s stock price today and that would be $80mn give or take – about right. Now, if I just sold that, I’d owe the tax man $22mn give or take, assuming a tax rate of about 23% under “long term capital gains” because I’d have held the shares for more than 2 years. OK, now, “why are long term capital gains a thing?” is a good question. The simple answer is: for the convenience of capitalists, of course. Capitalists managed to get that built into the tax code because, for reasons that are quite flimsy, they don’t deserve to pay the same tax rate as income because mumble mumble re-invest make economy sing, or some such bullshit. If I sold the $80mn and wrote the IRS a check for 50% of that, I’d have to write a check with so many zeroes it would cause me carpal tunnel syndrome so $22mn is much more reasonable. Long term capital gains are one of the ancient tax avoidance schemes that have been built into the tax code for so long that people think it’s perfectly normal when, in fact, it’s just another way for rich people to avoid having to pay taxes. Anyone who owns $80mn of Tesla stock can afford to let it sit idle or maybe sell some of those 100,000 shares and buy a mansion with the money left after they pay their taxes.

But that’s not good enough. If I have those $80mn in shares, I want to pass the full $80mn on to my useless frogspawn, so that the US can have another generation of expensive parasites latched tick-like onto the body politic. Who knows, with all that money, they might get into politics (with all of that money they’ll probably be republicans, too!) or maybe they’ll get a good job as talking heads on television if they’re not unattractive-looking. So, this is the current dodge: I go to a banker and take out a loan for $75mn against my $80mn worth of shares. Now, since it’s a loan for some reason I don’t have to pay taxes on that and I’ve got $75mn in my bank account to buy Lamborghinis and cocaine with. Naturally, I will have to pay a certain amount to service that loan but, I’ve also got $75mn to invest in other things – effectively increasing the money supply around myself. I could invest in Elon’s next company with $1mn of the $75mn and get even richer! Since I never sell any of the original shares, I never pay taxes on a cent of it, and I have $75mn to play with.

Sounds sketchy, and there are some problems with the scheme. Most notably, what if Tesla goes out of business. Oops. Well, all I can say to the bankers who originally lent me the $75mn is a Trump-like, “good luck getting your hands on any of that.” I’d immediately re-negotiate the loan (like Trump does) offering as collateral, perhaps, the fleet of Lamborghinis I bought with the $75mn, and the penthouse suite which is worth $100,000/year (right?) etc. Guys like Trump do this kind of loan “restructuring” all the time, and they call it “restructuring” but basically it’s another way of saying “we agree to pay you less than we originally said we would” and the shareholders of the bank notice a small blip in the bank’s profits but they don’t care because they want to do the same thing, too, someday.

Another trick would be – suppose I am Bob Dylan. I’ve got this property, which is the publishing rights for a ton of music that’s worth great big gobs of money. I can sell the publishing rights outright, and pay a ton of taxes, or I can take out a loan against those publishing rights, and have a field day in the meantime. If I’m old and I think that maybe the grim reaper has me in their crosshairs, this might be a perfectly sensible move, for one reason – which is the really dodgy part of this particular tax dodge: there is a thing called a “Step-up in Cost Basis.” The way that works is, suppose I have my $1,000 worth of Tesla stock (worth $800/share) and now I have $75mn in debt to pass on to my frogspawn, who will have to sell the Tesla stock to pay off the debt – but Step-up Cost Basis says that the “original share price” (also called “cost basis”) now automatically becomes, for them, $800/share or the current cost. Magically $30mn or whatever in tax debt is erased because mumble mumble reasons that capitalists find convenient. Basically, the step-up in cost basis is a clever thing that rich people got built into the tax code for exactly this purpose. I suppose the argument is that, since I am the one who bought the shares in the first place, and I’m dead now, the person who inherits the shares doesn’t inherit my tax debt, therefore the shares’ value has to change. It’s a stupid argument, really, but that’s how the tax code has been made to work.

If you’re a normal person, none of this matters in the slightest because most people don’t have investments at all and (watch the birdie!) step-up cost basis does not apply to real estate, which is most of what normal people own if they own anything at all. [By the way, that’s what an aggressive tax lawyer might try, if you inherit grandma’s mansion – the cost basis is the current value not what grandma paid for it anymore] For normal people, who aren’t worried about millions in taxes, none of this matters except for when the government says it doesn’t have enough money to pave your streets or help you with your health problems or child care. Remember: the government is constantly poor-mouthing that it can’t do anything for the citizens except have a massive military and F-35 and … are you still listening? Because they’re going to drone on about how horrible the debt is and end up whispering “fuck you” at the end.

Enter the tax lawyers who’ll say “this is tax-avoidance not fraud! It’s OK!” except that it’s obviously a stupid dodge that was built in to allow rich people to avoid paying any taxes at all, and actually to convert massive profits into small debts and pocket a ton of cash on the way. The key word in all of this is leverage – having control over money is, for all intents and purposes, having money – because you can decide where it goes and what it does; it’s a liquid asset (you can buy Lamborghinis and cocaine with!) instead of a long-term investment. Of course the final bit of stupidity is that once the step-up in cost basis is accomplished, your frogspawn still have long-term capital gains tax rates applied to the original Tesla stock, when they sell it.

The rich get richer, the poor get poorer and that’s written into law in the US. Meanwhile, the assholes in Washington play their game of “we haven’t got any money!” Well, now you know why.