This scared the shit out of me. And, worse, I subsequently figured out a better way to do what I was trying to do, anyway.

The details of what happened are not 100% certain, unfortunately. The short form is, I fired up the table saw and when the blade got up to speed suddenly there was a snap and something hit my glasses right over the front of my left eye.

Whatever it was, it hit so hard it knocked my glasses off my face. There’s now a largeish chip exactly where my left eye would be if it had been exposed. And suddenly, I felt like all the money I spent on impact-resistant lenses was a good idea. Naturally, I have shop glasses, too, but I was wearing my “daily drivers” which were still good enough to take a bullet for me. 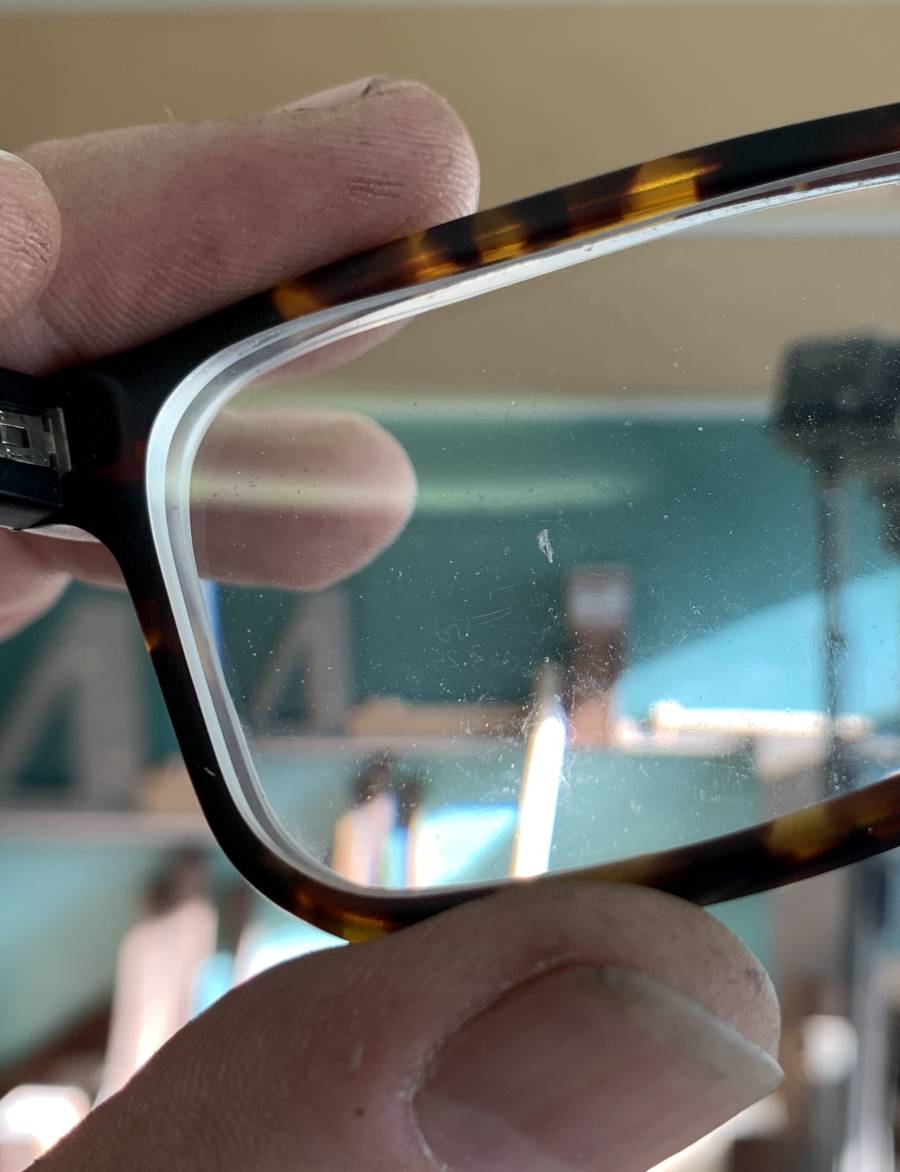 What happened? One possibility is “foreign object damage” – perhaps I left a screw on the table and it somehow came into contact with the blade. The trajectory was interesting – I am pretty much always off the axis of my table-saw or lathe – and whatever it was came flying at about a 20 degree angle. Another possibility is that a tooth chipped off the blade and decided to fly toward me. I had just changed the blade in the saw and it’s possible that the blade wasn’t fully tightened, though I checked that afterward and it seemed OK. [The theory there is that the blade wobbled on the arbor and hit something and knocked a chip of carbide off]

Yes, if I had been wearing my face shield (I usually wear a face shield with earmuffs while using the lathe) it would have absorbed the impact nicely. But, I wasn’t.

If I were a Texas republican, I’d make some comment about how it’s creeping nazism to require people to wear their face shields or safety glasses when using a table-saw! Bring back lawn darts and riding motorcycles without helmets. [I live in Pennsylvania, which has a huge population of deer, and it’s distressing to see motorcyclists noodling around with their remaining hair in the wind, no helmet, no goggles, etc.]

So, what was I doing? I was trying to make a finger-board for a box joining jig I’ve been making. It turns out that making a finger-board is not super easy (you can buy them for $25 but I was being stubborn) – I had been doing a lot of moving and clamping a piece of ABS plastic to a mitre, and measuring with a micrometer. That’s for the birds! Meanwhile, I stumbled across a completely different solution which is embarrassingly simple: suppose you want a 1/2″ fingerboard. Well, you carefully set the rip fence and cut a few strips of oak that you can mic to exactly 1/2″. Then, you cut a few lengths of that, cut them into 5″ chunks, glue and stack the chunks side by side, clamp them well and – boom! Fingerboard! It’s so easy I really feel like I ought to kick myself. Here, I had been thinking of doing something in aluminum using the milling machine and a 1/2″ end mill, but it doesn’t have a DRO and I’d be right back to cutting and mic’ing until my brain bled.