Leaking oil and gas wells are going to be the future’s asbestos crisis and lead paint rolled up in one.

It’s beginning to become obvious to any idiot (or, at least, this one) that the government completely dropped the ball on regulating post-extraction clean-up. We all kept motoring along, without figuring out what happens to an oil well that is no longer producing. It’s no longer producing, right? That’s good enough, right? Wrong. Especially underwater wells – the oil still seeps out as water presses down into the former well, so usually it’s capped off somehow but who maintains that? Often, the company that did the drilling went out of business or was bought by another business – it’s shell companies all the way down – and unfortunately, physical reality doesn’t care much about human corporate shelters. 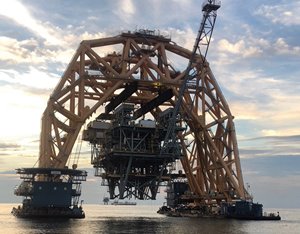 Decommissioning an oil platform is a huge undertaking, commensurate with building it in the first place, but it’s not productive or profitable – it’s just an expense. So decommissioning tends to focus on retrieving the expensive parts for future use or recycling for materials. The American Society of Mechanical Engineers has a good article about some of the actions necessary. [asme] These are big things and we’re talking on the scale of 25,000 tons of concrete and rebar to remove.

Offshore oil and gas platforms are among the largest structures humanity has ever built. There are more than 7,500 of them towering up from seas all over the world, according to some recent estimates. As wells dry up and pumping equipment wears down, many of those structures are growing obsolete.

But producers cannot just walk away from their creations. Those oil wells will have to be decommissioned and capped off and the platforms taken down. It will be a vast effort. In Europe’s North Sea, where production has declined to 1.5 million barrels per day from 6 million barrels per day in its prime, decommissioning could cost producers $150 billion, according to a recent report by Boston Consulting Group (BCG).

You know that $150 billion is going to come against profits for the extraction companies, and they’re not going to like that. Again, reality doesn’t care about what’s convenient for companies.

I’m willing to bet that the endgame, here, is that the companies will declare bankruptcy and the money they put into the remediation pool (drilling companies are supposed to escrow money for cleanup but the escrow is systemically under-funded because the estimates for cost are horribly optimistic) won’t be enough. The taxpayers will be asked to pay for it, in the end. And there will be huge politics around the issue, because the department of defense needs money and there’s somehow never money for necessary infrastructure. Right?

For example, certain structures in Shell’s Brent field, located in the East Shetland Basin of the North Sea, weigh 330,000 tons. That is the equivalent of the Empire State Building, according to Duncan Manning, decommissioning manager for Royal Dutch Shell’s Brent field.

Taking down something that large is a massive engineering project that requires state-of-the-art equipment.

Humanity’s ability to plan ahead is seriously in doubt. And I suppose it’d cost more to somehow re-purpose it for undersea hydroelectric power or something like that. And, of course, all this stuff was build back in the time when the energy companies were cheerfully lying about the consequences of fossil fuel exhaust – none of what is going to happen was ever considered, because the information was suppressed.

Establishment sockpuppet The New York Times has a pretty interesting article about how leaks in oil rigs are being tracked via satellite. [nyt] Unfortunately, the context is post- hurricane Ida. Apparently the hurricane did enough damage to the various wells and capped off wells that there’s considerable leaking into the Gulf of Mexico. 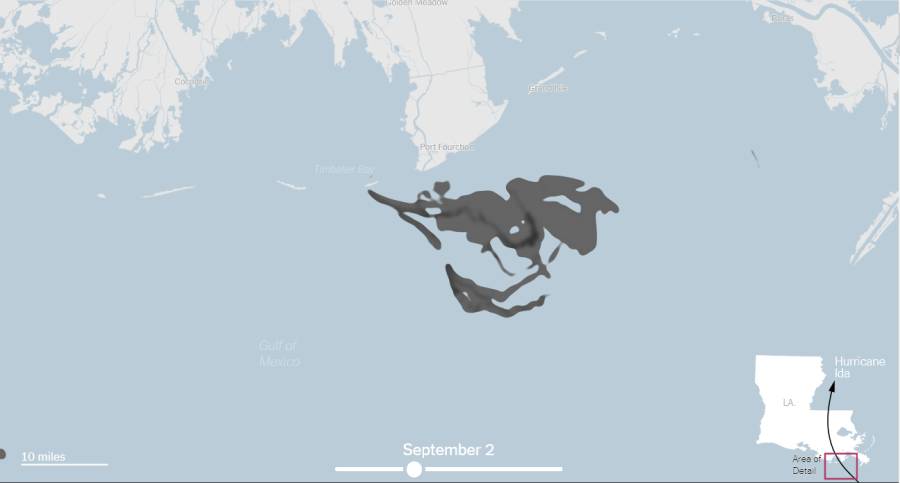 I don’t want to invite this thread into being mired in a pro-nuclear rant by the Gerrardian, but it’s important to remember that fossil fuels have byproducts that are as nasty as the byproducts from nuclear energy? I don’t know if “as nasty” is the right way to put it – I don’t want to get into an argument about what form of nasty is nastier – it’s all nasty. There are also the nasty combustion byproducts of coal, which are another problem. But, let’s stay focused for now on all those leaking oil wells.

Using satellite imagery, NOAA typically reports about 250 to 300 spills a year in American waters, including the Atlantic, Pacific and the Gulf of Mexico, a pace of about 25 spills a month. In the two weeks before Ida, NOAA spotted just five potential oil slicks in the Gulf. The program, the National Environmental Satellite and Data Information Service, uses satellite technology to detect important but hard-to-see events, like methane leaks, signs of deforestation and others, that affect the climate and environment.”

I’m surprised the republicans haven’t de-funded NOAA yet. Shooting the messenger is not an effective strategy but it remains popular.

On Aug. 30, even as the thick slicks spread their way across the water, the Biden administration moved to lease more than 80 million acres in the Gulf for new oil and gas production. The Bureau of Ocean Energy Management expects those leases to produce up to 1.12 billion barrels of oil, and 4.4 trillion cubic feet of natural gas, over the next 50 years.

The US government’s strategy on climate change is that we’re going to trigger an extinction event that includes humanity. They keep talking about reducing use of fossil fuels but their reductions are mostly scheduled to start sometime after 2050. The US government has gone on record saying that it expects CO2 emissions to continue to increase through 2050, when I suppose Jesus will return in all his glory and drop plans for a cheap CO2 extractor system and fusion powerplants or something goofy like that.

Imagine a junkie who is told “that heroin is going to kill you” but replies, “OK, I’m quitting. Starting in 2050 I’ll start reducing how much I use. Until then I’ll be increasing my dose, naturally.” I almost wrote: imagine a 70-year-old junkie, except there aren’t that many of those. Anyhow, our junkie continues to insist “I’ve quit.”