This is another of my inventions, emphasis on “easy”. The dish can be prepared in the amount of time it takes to boil some water and prepare rice noodles.

When I was developing this recipe, I experimented with doing things “the hard way” and “the easy way” and compared the results. It turns out that it doesn’t really matter, which means I do it the easy way. I’ll do a quick walk-through of the easy way, and follow with notes about how to do it the hard way, if you’re a cooking purist. I’ll also describe variations at the end.

This is, simply put, a delicious dish. It’s not sophisticated or high-brow, it’s just yummy, savory, spicy, and complex. It’s not derived from any particular tradition, though since I am using Thai spices, I suppose it’s Thai-style – which means, as I will explain in the variations, that any of the typical Thai local variations are fair game. I’ll note that it could just about as easily be made in an Italian tradition, by substituting Italian pasta, pomodoro tomatoes, balsamic vinegar for fish sauce, etc. But at the point where we talk about that, we’re hauling in the entirety of world cuisine. 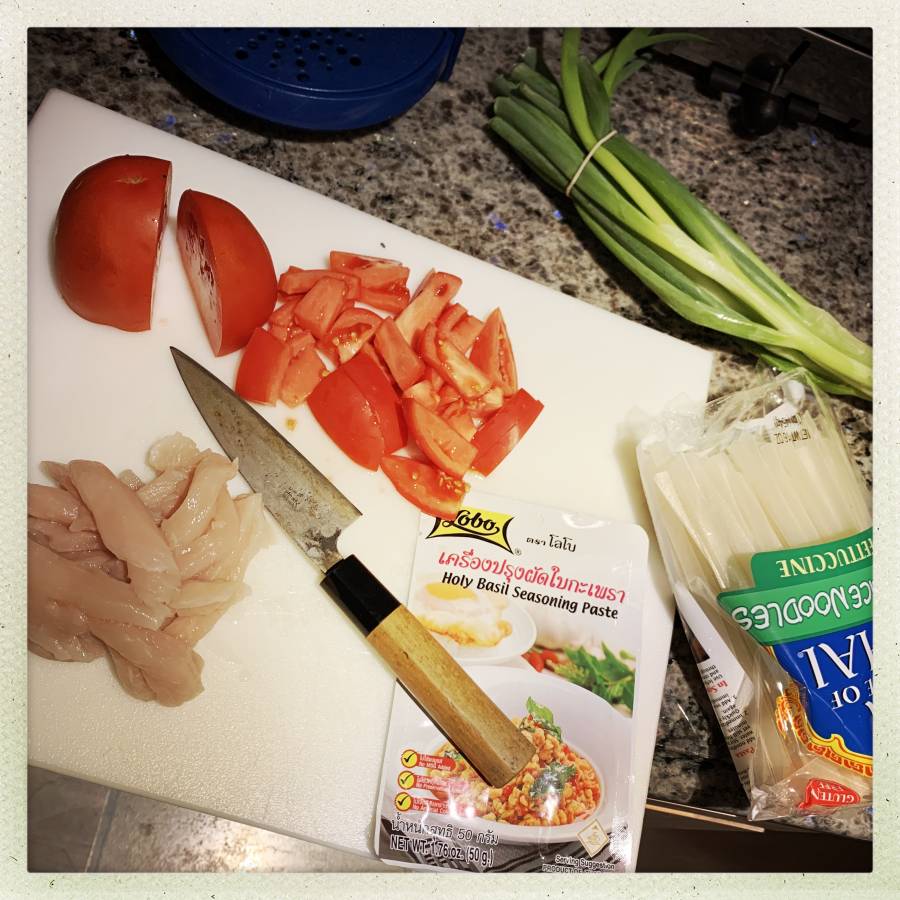 Those are the ingredients as the dish is typically made. First off, you’ll notice the Lobo Thai Holy Basil Seasoning Paste [amzn] [Available in 10 packets for $13] The Lobo spice packets are amazing, and if taking a well-understood shortcut to producing something delicious is all that stands between you making this dish, and going to a restaurant – by all means, use the spice packets. It’s a great option for those who don’t have their own supply of Thai holy basil. Lobo’s Laab spice packets are also wonderful: you sautee something, add the spice packet and stir fry it, and you have face-meltingly good Laab. I’ve used that to make tofu Laab, salmon Laab and, of course, chicken.

I usually use less than a whole chicken breast, cubed or shredded. There is a lot of latitude here. Also, one or two tomatoes depending on how big and juicy they are. In the US, it is very hard to get good, juicy, ripe tomatoes so if you’re a purist, grow your own.

The rice noodles are optional but recommended. If you’ve never made them, they’re made just like Italian pasta: bring water to a boil, add salt, throw the noodles in, stir periodically and drain when “al dente.” You can use rice or Italian pasta, if you wish. And the green onion stems are optional, too. They’re really a garnish, but they’re an important garnish because they add another layer of taste and they look great. 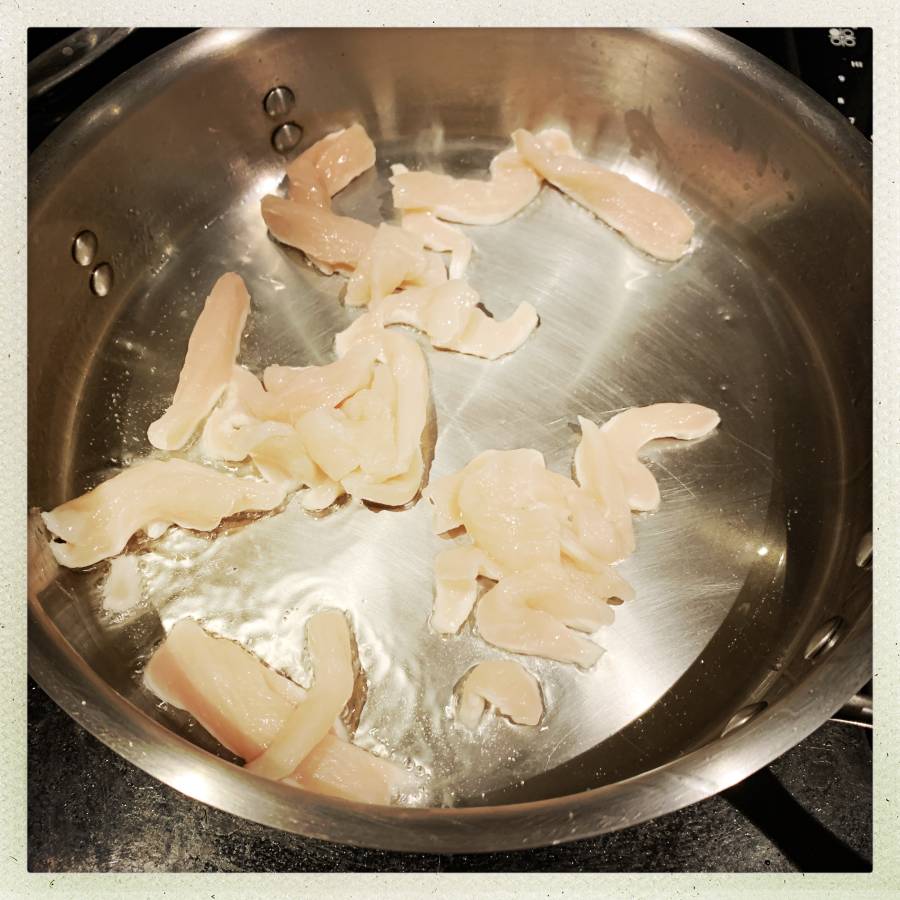 Put some vegetable oil in your pan or wok, and heat it until it’s just below smoking temperature. Scatter the chicken into the oil and let it sit for a minute before you stir it to flip it over. I like a bit of caramelization in the meat. 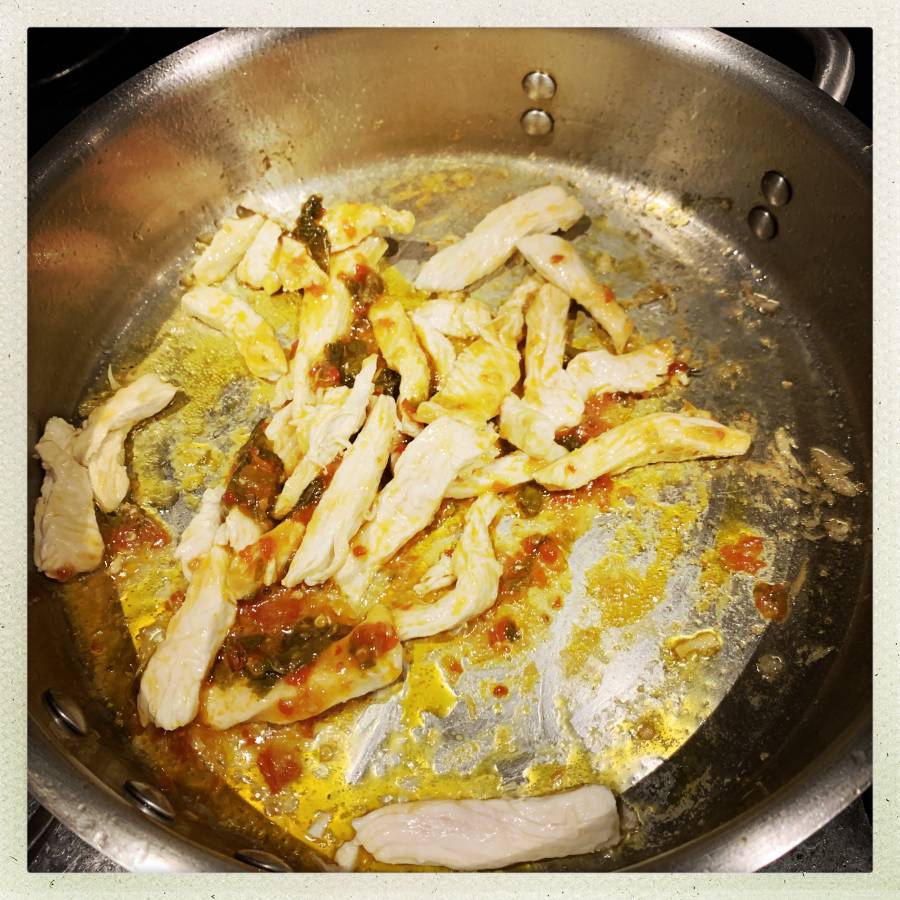 Don’t worry about cooking the chicken through – that’ll just toughen it. Open the spice pack and add that, stirring it all together. 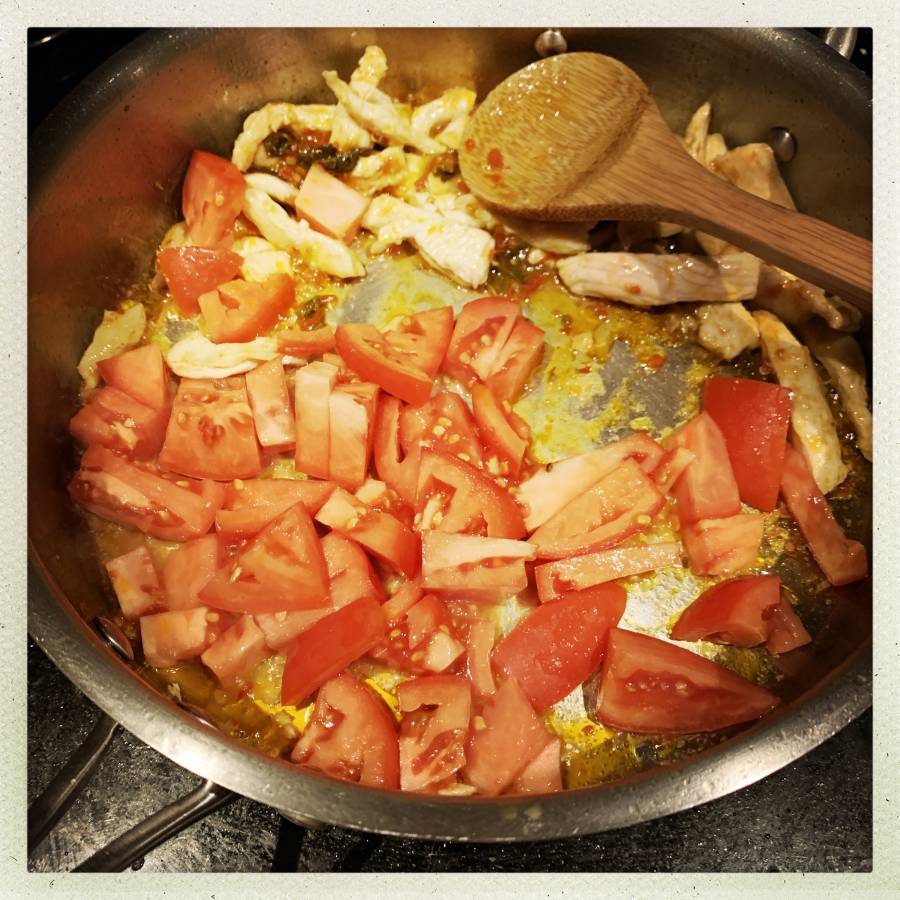 Push the chicken up to one end of the pan and let the other get good and hot, then toss in the tomatoes. If you think the pan is looking dry, add some oil and let it heat up. When you drop the tomatoes in you want the pan oily and hot so the tomatoes explode all over the place. Just kidding – you want the tomatoes to sear and release their flavors and juices, as good tomatoes will do. Those are not good tomatoes, they’re an example of the kind of plastic tomato-ish shit sold in US grocery stores. 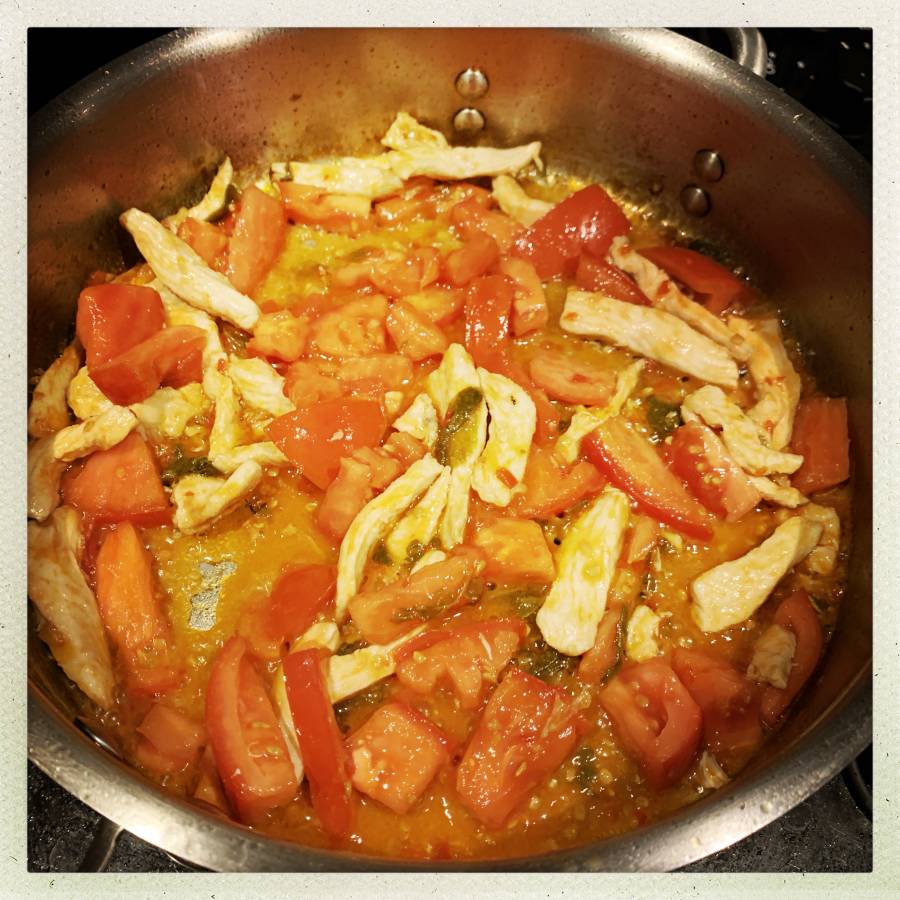 At a certain point, the tomatoes will start to break down and get mushy. That’s when it’s ready. Observe closely the photo above, and the previous, and you can see the change that happens in the tomatoes. You have achieved deliciousness. 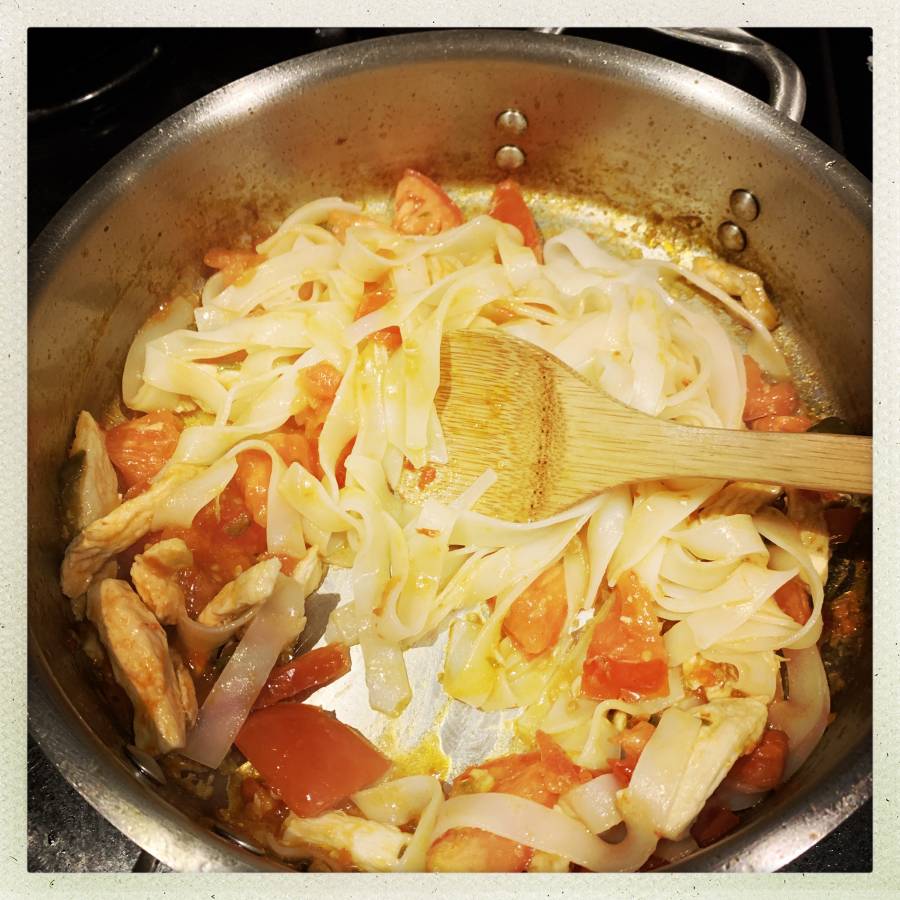 Drain and add the noodles, and stir them in, soaking up the delicious tomato spice goo. 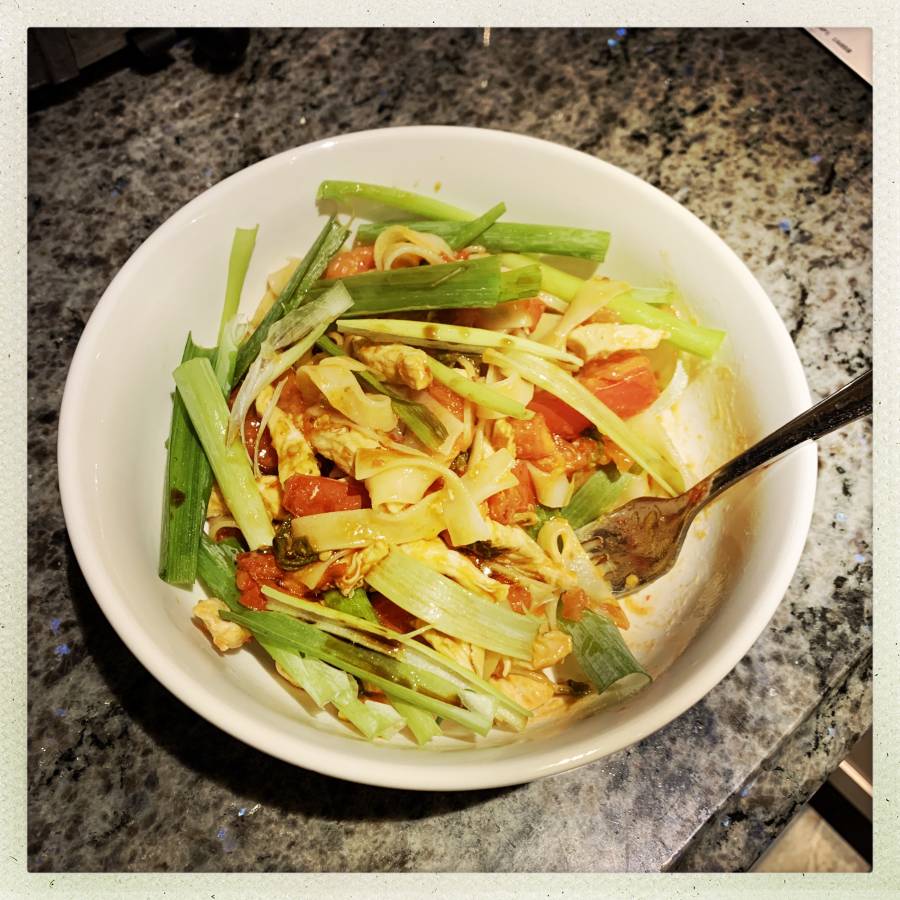 Tip it out into a bowl or two, and garnish with sliced green onion stem, if you like that. You can also add soy sauce, or fish sauce, or sriracha, or whatever. At this point, it’s your world and you rule it. Make sure you take a photograph and send it to me!

The sauce package is an example of a “fried sauce” which is a quintessential technique in Asian cooking. It’s a sauce you cook in a pan on its own and then add to another dish – for example, it’s how Szechuan shredded garlic pork is made: you brown the pork and cook the sauce (shau shing wine, garlic, cornstarch, dark soy sauce, sesame oil and a bit of red pepper sauce) until it starts to thicken, then stir-fry the dish and add the sauce. The fried sauce technique is critical to orange chicken, general t’so’s chicken, shredded garlic pork, muu shuu pork, etc. What I’m getting at is that the Lobo sauce packet is already more or less perfect and you can indeed just pour it in. Or, you can take a small saucepan ( <- hence, the name!) and put some fish sauce, garlic, red pepper sauce, dark soy sauce, brown sugar and a bit of cornstarch. Then combine and heat it slowly until it thickens slightly. You can use honey instead of brown sugar, red pepper flakes instead of red pepper sauce, you can use chicken or beef stock instead of fish sauce, etc. You can use Italian basil instead of Thai “holy” basil, if that’s all you’ve got. All of those options will change the flavor, of course, but it’s all along the same trajectory. My advice, because we’re all cynical adults, here, is to be lazy and use the sauce pack.

Let’s talk about basil. I have a little Aerogarden hydroponic spice garden, which maintains a steady supply of fresh cilantro, Thai basil, and Italian basil. It’s a great gift for nerdy food lovers, BTW. There is a difference between Thai basil and Italian basil, and it’s important – but it’s basil and it’s fantastic either way. Also, I like the fresh Thai basil. When I serve this sometimes I grab a few leaves of fresh holy basil and some cilantro and chop them into an “add-in” that can be sprinkled over the top. That’s a good garnish option if you’re one of those people who farts a lot when they eat green onions.

There are tons of other options for this dish. For example, you can take a yellow bell pepper and chop it in strips that aesthetically match the shapes in the dish. Add those late in the mix so they stay crunchy. You can microwave cook some carrots and cut them lengthwise like I did the green onions, and toss them in. You can use various meats other than chicken. You can use tofu. Whatever.

Another traditional set-up in stir-fry is to add spices to the initial fry of the protein. If you were making this dish like a cook from Szechuan, you’d add chopped green onion bulb (the white part) and garlic and ginger to the oil to “bloom” the flavors, then add the chicken (or whatever). That’s a classical technique that is fantastic and subtle. If you want to follow that path, by all means, go ahead. Typical stir-fry, you do the protein in flavored oil then pull it out of the wok and let it sit in a bowl, while you stir-fry the vegetables separately. Then, add the protein back in when you turn the heat down and add the noodles and drop the sauce on and combine the whole thing. That also works but it doesn’t make a large difference to the flavor. If you’re cooking a protein that will get tough: small shrimp, scallops, fish, then the separated steps is a better way to keep control over how long the protein stays in the heat.

This dish came about because I started philosophizing about stir-fry and experimenting with my own Szechuan-style shredded pork in garlic sauce. I began to feel that I was coming to understand the role of separation while cooking, and combining flavors with a separately cooked sauce. That was when I realized that separately cooked sauces are great for when you want to control the inter-penetration of the flavors, so if you’re making something like this, with its tomato sauce that goes everywhere, there’s no point in worrying about that.

Doing this write-up has taken much, much more time than making a bowlful of this yummy, lazy, dish. Please give it a try if you can.