It’s sad how American media carry forward the establishment’s line that it’s a surprise that Afghanistan is quickly falling to the Taliban.

I suppose that, to some degree, it refutes the long-term establishment line that Afghanistan was being turned into a modern “democratic republic” with a military that could control it into a Westphalian-style “state” – but, anyone who noticed what was going on knew that the Taliban had figured out, early on, how to prevent that by embedding people in the military and government. It takes remarkably few resources and it works pretty well – ask the Vietnamese who infiltrated Hue before the Tet Offensive. I was surprised, for a while, that the Taliban never tried a Tet-style attack, but that was because I didn’t estimate their patience. They knew they could just wait the US out, then roll up their country, again. That is exactly what has happened.

The news is full of stories about “Major town in Afghanistan falls to Taliban.” Then “7 major towns in Afghanistan fall to Taliban.” etc. I’ve lost count – but the reality on the ground is that the US had given up on its stupid “clear and hold” strategy and was doing Vietnam-style “search and destroy” missions from safe bases out in the back country. So, based on satellite and cell phone intercepts, some bunch of imperial troops would saddle up in helicopters and ride out and kill someone that someone had told someone was a Taliban leader, and head home for dinner. That’s the “clear” part. The “hold” part was omitted.

Local officials said insurgents had flooded Pul-i-Khumri and Faizabad in the north, and Farah in western Afghanistan, making it 9 fallen cities in five days.

KABUL, Afghanistan – Afghan forces essentially collapsed in three more provincial capitals on Tuesday, adding to an already alarming drumbeat of Taliban victories around the country and effectively cutting off the main highway connecting the country’s capital with northern Afghan provinces.

Oh, the NYT counts it as nine, this morning. C’mon, guys, so what? Insurgent wars are often a matter of momentum and the Taliban have it. You can be pretty sure that everyone north of Pul-i-Khumri is pondering their options and trying to figure out whether to run or sit it out. It should surprise nobody that the Afghan military collapsed – it was a Potempkin military all along. For all that I complain about US “defense” expenditures, I do agree that building a modern military is incredibly expensive and, if that’s what you want, that what you have to do. Afghanistan never had the money or interest or control to build a modern military. Their economy is too small, and besides, it was blown up by the Soviets and then the US. Why would anyone build a modern military when they’ve just seen their nation crushed like a grape by 2 super-powers in succession? It’d just lose anyway. And, now, they see that modern militaries lose to insurgencies, just like the US and USSR did – so, why bother? Of course populations don’t think like that, as a whole, but the general trend would reasonably be a bit defeatist. 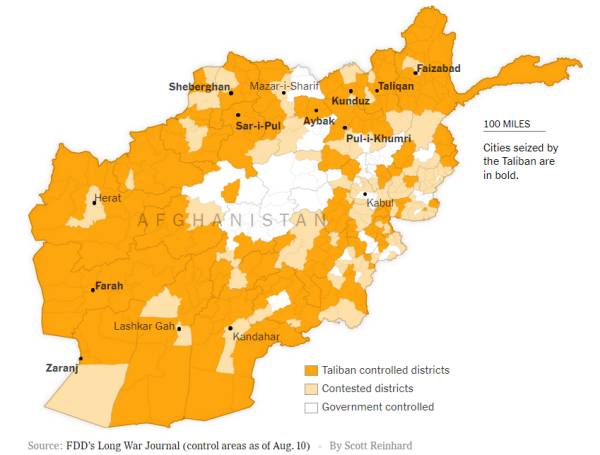 There are “contested districts” around Kandahar and Kabul, which means that the populations of those cities will be thinking about how to adjust their politics. The Taliban, by the way, aren’t stupid. I saw a photo from Kunduz of a police control-point flying a Taliban flag. That sends a message, “there is a new sheriff in town” that’s unmistakeable. Everyone who sees that will begin to adjust their politics.

Everyone, that is, except the US.

The United States has sent B-52 bombers and Spectre gunships to Afghanistan in a bid to stop Taliban insurgents who are marching towards three key cities.

The B-52s are flying into Afghanistan from an airbase in Qatar, hitting targets around Kandahar, Herat, and Lashkar Gah in Helmand province, sources told The Times.

Oh, look! When we’re losing, it’s time to do some crimes against humanity – “area bombing” – which is all B-52s do. How incredibly stupid: we’ve lost, and withdrawn, and still are trying to bomb the Taliban into submission – which is exactly what manifestly did not work for the last 20 years. Why would anyone expect it to accomplish anything, now? These idiots in Washington are pretending they are too stupid to understand what losing a war means. It means you stop fighting and start negotiating.

Meanwhile, China is negotiating with the Taliban. [counterpunch]

On July 28, 2021, in the Chinese city of Tianjin, China’s Foreign Minister Wang Yi met with a visiting delegation from Afghanistan. The leader of the delegation was Mullah Abdul Ghani Baradar, the co-founder of the Taliban and head of its political commission. The Taliban has been making significant territorial gains as the U.S. military withdraws from Afghanistan. During the meeting, China’s Wang Yi told Mullah Baradar that the U.S. policy in the Central Asian country has failed, since the United States had not been able to establish a government that is both stable and pro-Western.

As they say in Washington, “Oh, look, the adults have entered the room.”

Unlike the US, China actually has interests in Afghanistan. They share a (short) border and Tajikstan’s stability is also a concern. The Chinese aren’t concerned if there is a government that is “stable and pro-western” – they will settle for “stable.” They’re pragmatic people.

Presumably these war crimes get chalked up in the “Biden” column.

Tomato Noodles » « Something Something