Boingboing published a piece [boing] looking at US police budgets. 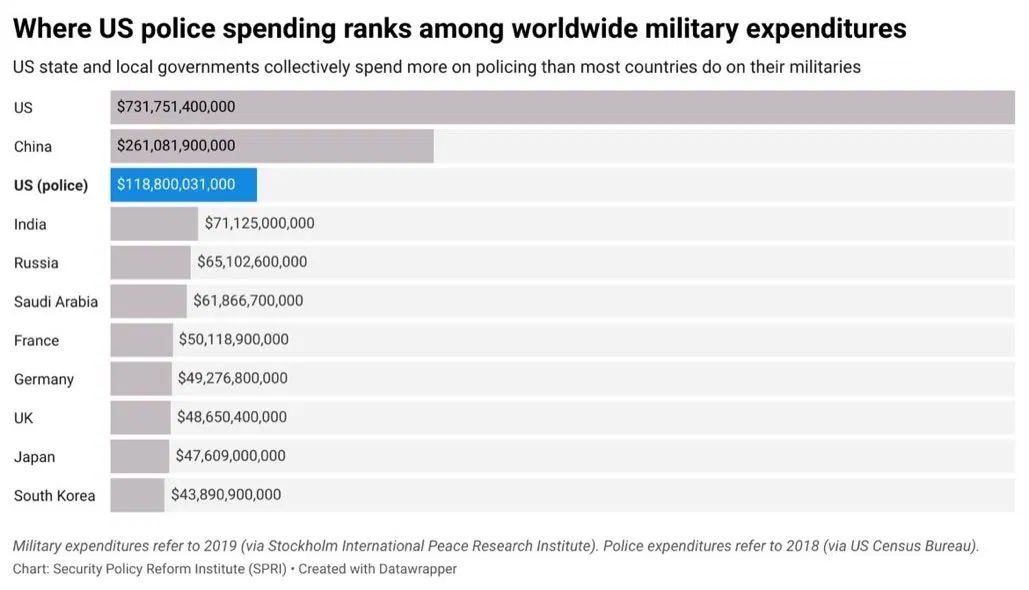 If the US’ expenditures on police were compared with other militaries, our police are the third largest “military” in the world. That sort of puts a new spin on Bismarck’s old comment on the British expeditionary force: “If the English should land on our soil, I shall have them arrested.”

I am absolutely certain that US cops are not the toughies that they think they are, but in budgetary terms they have a 2:1 advantage over the Russians. Perhaps the US should send the police to Ukraine to arrest the Russians. That’s not a funny idea, really – the Russian army are nobody to trifle with, and the police would not stand a chance against them.

That thought got me thinking about the relative budgets of certain municipalities in the US. The LAPD and NYPD both have budgets around $20bn/year. That puts them, combined, right around where Israel’s military budget sits. Israel, being the terror of the Middle East. Iraq, which the Bush administration sold as a great threat to the US, had a military budget that was 1/4 of NYPD’s. So does South Africa.

The military budget of North Korea is 1.2 billion. That’s it. LAPD’s $20bn budget means either that LAPD is really inefficient, or maybe North Korea is an over-promoted paper tiger. All that crap about them being ready to attack South Korea, which has massive US forces stationed there even though the South Korean government has asked the US to take them away – it’s just the usual attempt to create an excuse to start another war. The US would be happy to “reunify” Korea because it would mean that North Korea was going to be subsumed into South Korea’s market economy.

All of that’s interesting but what really bothers me is this: the US Police are a massive army, inward-facing, to control the people. That the US police tend to be fascistic and white supremacist thugs, who are used to brutalizing people under the umbrella of law – I’m not so happy that we’re spending so much on self-oppression. Anyone who has watched the “defund the police” movement will have noticed that the police continue to grow – politicians who were talking about defunding the police suddenly switch their stories to increasing police “training” budgets and buying them more cop gear. Because, being about as well funded as the Israeli army’s not good enough.

Now, the term “national security state” isn’t so funny. Repressive regimes like China and Russia have military that are dwarfed by our “freedom forces.” To be fair, China’s inward-looking security forces may dwarf their military; they don’t publish a lot about these things.

The boingboing analysis leaves out the FBI, which are cops, but not municipal. The FBI adds another $10bn. And, if you add the intelligence agencies: NSA and CIA, which are absolutely inward-facing in spite of their earlier charter not to be, that’s another $30-40bn depending on what’s classified off-the-books and what isn’t.