I planted a few bamboo by the forging shed, last fall. There were a few days of -4F weather in the winter and the bamboo (supposedly fairly cold hardy) died.

This spring I got some even more cold hardy bamboo, and planted it last week. All 3 of them appear to be doing fine, so they’ll have a whole summer and fall to grow before winter. I shouldn’t have planted the other ones in the fall. But, as I was planting the new bamboos, I noticed that last fall’s weren’t actually dead, either. Small green leaves were appearing on one. The other two, the stalks looked dead enough that I trimmed them down to ground height and nearly pulled them out, entirely. I’m very glad I did not do that. 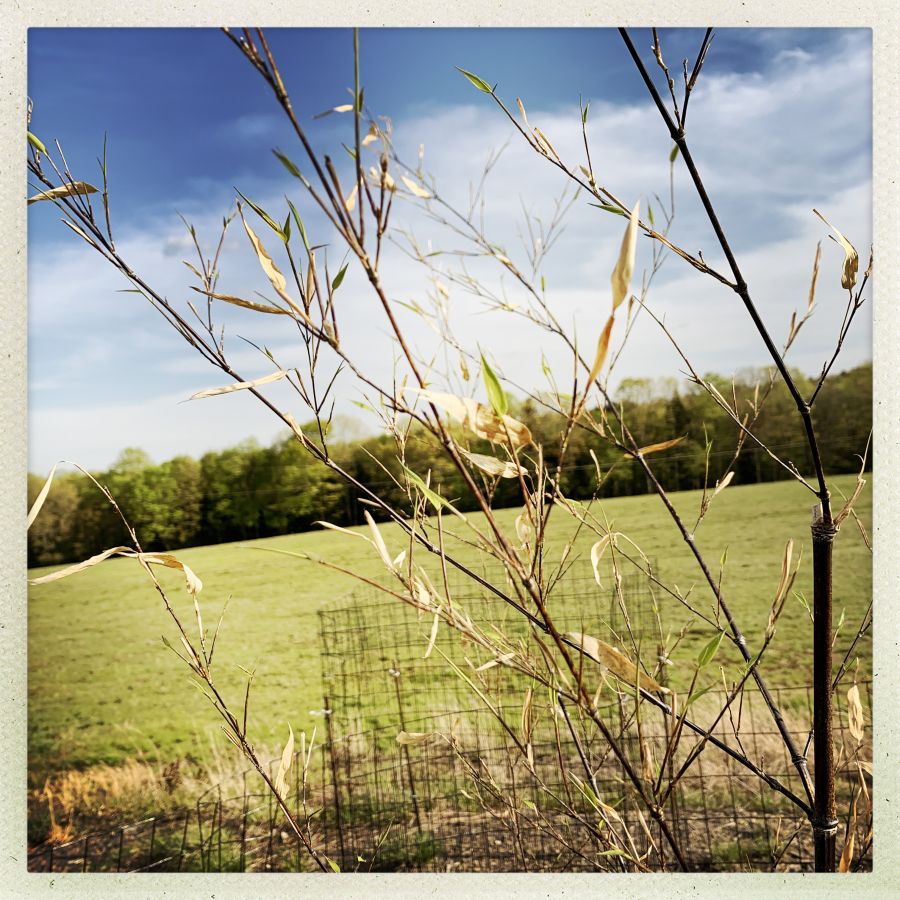 But, all three plants were alive under the ground, and have put up shoots. This is a breed of bamboo that grows up to 60′ high and makes dense forests, and – wow! – does it grow fast! 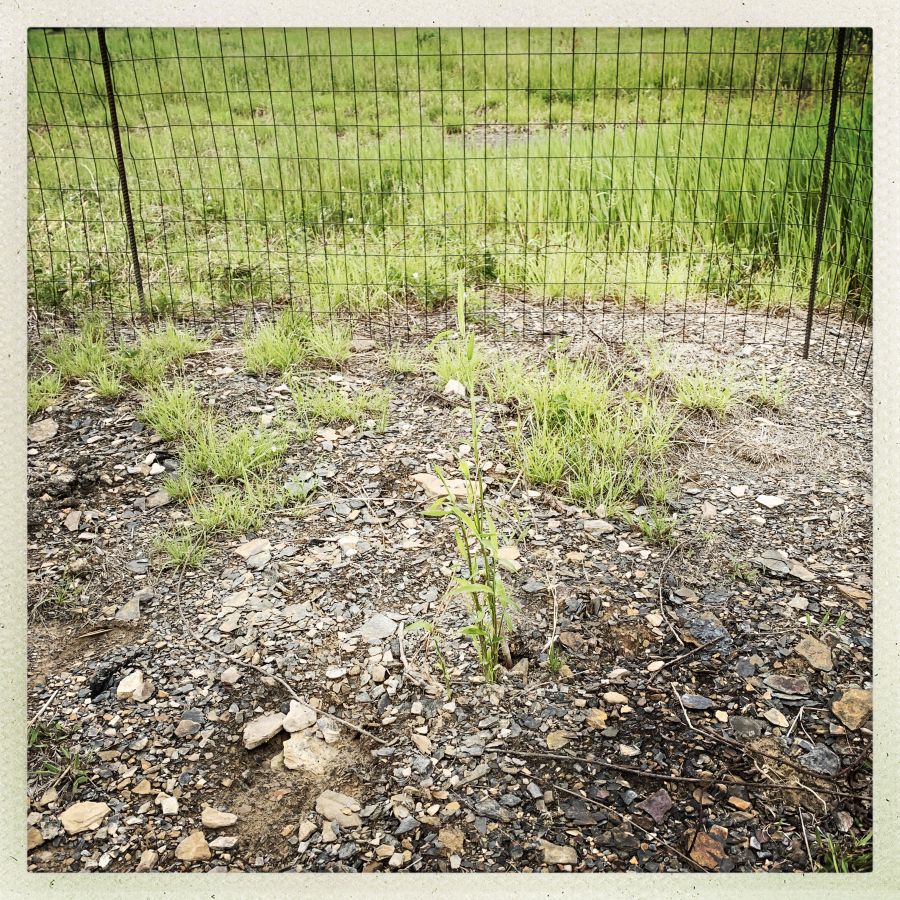 That is 3 weeks’ growth. I cut the old stalk off in order to encourage it to make more stalks. I don’t know if that was the right thing to do but it doesn’t appear to matter – the bamboo has its own ideas.

Apparently these are a nasty, invasive version and some jurisdictions ban people from planting it. In my case, it would take decades for the stuff to grow far enough to reach the borders of my propertly, so it’s just a question of suppressing it within my boundaries. It would be a not-unexpected irony if the state of Pennsylvania tried to prosecute me for planting bamboo, while refusing to do a damn thing to defend my property rights from trespassers.

One of the things I absolutely hate are the many ATV’ers who maraud wherever they want to go. Pennsylvania has lots of rules for how you can mark private property, no hunting, or not ATVs but everyone goes everywhere. The only property lines most Pennsylvanians will enforce are their own. I still occasionally wind up discussing this with some asshat on an ATV who has been tearing up my property, “hey, how would you feel if I come do some loops around your place in my 4×4?” they get all huffy and say they’d shoot anyone who did that. Which is my cue to point to the L1A1 leaning in the passengers’ seat – “So you approve of shooting trespassers, huh? You strike me as a rather stupid person.” Yes, I take a rifle with me when I go to confront hunters and ATV’ers because I have been offered threats on multiple occasions. I don’t like having people threaten me so I want to give them something to think about.

Before you say “call the police” I have, and I do. This is Pennsylvania. The police frequently don’t come. You call and they say “we’ll try to send someone by.” But when they do come they always say “nothing we can do, unless they attack you.” Yeah, that’s great. Out here in Clearfield county there are more ATVs than there are people; no kidding. The hunters are equally bad. Hunting is such a thing out here that some schools let the kids out on the first day of deer season so they can go to Marcus’ property and try to blast a deer. Usually the hunters learn not to come back, once they realize that you are going to ruin their hunt. But there have been times where I’ve had to turn my back and walk to my truck with 3 angry beerful jackasses holding deer rifles at the ready; I’m scared of angry beerful jackasses with guns, who have just had their first day of hunting season ruined.

Sometimes I launch a drone and do a patrol from the air, which completely terrifies all the deer and ruins the hunt for the day. One time an angry hunter started to try to draw a bead on the drone so I took it low and fast and started zigzagging right for him. A drone with carbon fiber propellers sounds like a flying table-saw. Because it is a flying table-saw. The hunters leave pretty quick, once they see the gimballed camera tracking them – they know that they’re on film. I’ve taken pictures of ATV’ers and hunters to the state police barracks and asked them to charge some of these people with trespassing but they basically refuse to do it. One time a cop suggested that if I really cared I should “get to know one of the local DAs and donate to his election campaign because that might get their attention.”

One way I tried to deal with ATVs, a few years ago, was by planting lines of bamboo at the places where they enter and exit the property, and some of the slopes that they particularly like to shred on. Unfortunately, the bamboo was crushed pretty quickly with only a few survivors. One of my plans, if the 60-foot stuff takes off, is to begin transplanting shoots from that. I’ve seen what the big tall bamboo patches are like, and I almost pity the jerk who tries to take a dirtbike through one of those – especially after I trim some at a 45-degree angle with a katana.

It’s tempting to put up wire fences, or nail-strips or things like that, but I’ve been advised (by the state police, no less) to not do things like that because ATV’ers who get a nail in a tire have been known to vandalize properties, in return. Nice, huh? It’s how folks “appreciate nature” out here. In Maryland, nobody would ever ATV on a property marked “No Trespassing” because there would be a lawsuit and damages. I know a guy in New Jersey who owns a farm and some woods and called the police on some ATV’ers and the SWAT team showed up. I have no idea what they do in Texas, but I suspect it’s stupid. But Pennsylvania basically does nothing. Pennsylvania is a typical messed-up US state: you can’t buy beer on sunday (thanks, christians!) but you can buy a gun and the state requires an instant background check – basically, you can’t drink beer but you can buy murder weapons in about the same amount of time it would have taken to buy a beer, if you wanted to.

The fences around the bamboo are to keep the neighbor’s cows (who I allow to graze in the field next to the shop) from eating them like they did the first round I planted. I guess when they get tall enough I’ll put a solar-powered electric fence around them.