I’ve been a huge fan of Indian food since I first tasted it.

Back when I hung out with “preppers” I used to laugh at their basement caches of MREs (US Military preserved “Meal, Ready To Eat”) and point out that I had cases of “Kitchens of India” curries and at all times a minimum of 50lb of rice. When TSHTF I’ll be eating Rajma Masala over jasmine rice, while I do all the other survivalist stuff I have to do.

By the way, what I usually do for rice is take a 5lb mini sack of basmati rice, and one of those big 25lb sacks of Kohuko Rose or some other short-grain sticky-ish rice, and mix them together in a plastic painters’ bucket. I have mice out here, like crazy, and I have to store rice somewhere where they can’t smell it. There is no place they can’t get to, but if they don’t smell food and don’t realize they’re walking right past it, they’ll never catch on. Otherwise, mice are remarkably persistent ninjas. So (I know this is bad) I usually have an open package of moth balls on my food shelves. Everything is air-tight so it doesn’t affect my food but it tells the mice “this is not your restaurant.” I like the mix of kind of sticky rice and drier basmati rice, and the taste and smell of basmati rice are intoxicating. So, that’s my standard food rice setup.

For what that’s worth, too, I have a cheap $19 rice cooker. I avoid the fancy ones that the Japanese prefer, because they’re harder to clean – just give me something simple without a computer in it. If, by some chance, you do not own a rice cooker for any reason, I suggest you remedy that. Rice is one of the important foods and there’s hardly any pick-me-up better than a bowl of rice with some soy sauce and mirin, and maybe a pickle and some chopped norigoma stirred in. I think of rice, my rice cooker, and my rice condiments as an investment in fundamental happiness – for me, it’s better than an antidepressant.

Back to our main scenario: I have the Kitchens of India and rice. What am I missing?

By the way, “naan” means “bread” so if you want to be correct don’t call it “naan bread.”

The best Naan I ever had was thrown on a portable tandoor in a parking lot by the seaport in Singapore. There was an old guy making the bread and rice, and woman-partner was mixing up tubs of curry that were simply sublime: buttery daal that danced on your tongue, slopped up with naan right out of the fire, dripping with ghee and garlic. I don’t remember the conversion rate at the time, but that meal was about $5s, which would be about $1.75 US. I’ve eaten in fancy Indian restaurants including a magnificent and heinously expensive place in Newport Beach, that cost 50 times that, and was comparable in terms of deliciousness, if not decor.

You gotta have naan. The other day I convinced Anna to make her own batch of chicken masala, and it was a success though it didn’t get ratings as high as the restaurant where we normally eat (Tamarind, in Pittsburgh). But being able to make your own curry while you’re playing a computer game and don’t have to wade into traffic – that’s a big improvement in lifestyle. This got me thinking about naan, so I did a bit of research.

First conclusion: it’s gotta be easy. I found recipes that used yeast, others that used baking powder, and even sourdough for the hardcore who are producing a lot every day for a restaurant. I also found naan where the liquid was water, or milk, or yoghurt, or vegan stuff. And flour and salt and that’s it. If you’re vegan and you don’t want butter on it, you can do really well with garlic-roasted olive oil. Usually when I am researching a recipe I look at a few dozen recipes online and factor out the common stuff. That gives me a framework for what I’m looking at in the food, and the non-common stuff is usually ornamentation. In those terms, naan is pizza dough without olive oil in it: it’s a very very basic bread.

People online said you don’t need a tandoor, you can just cook the bread in a frying pan. I admit I was skeptical but they are right. 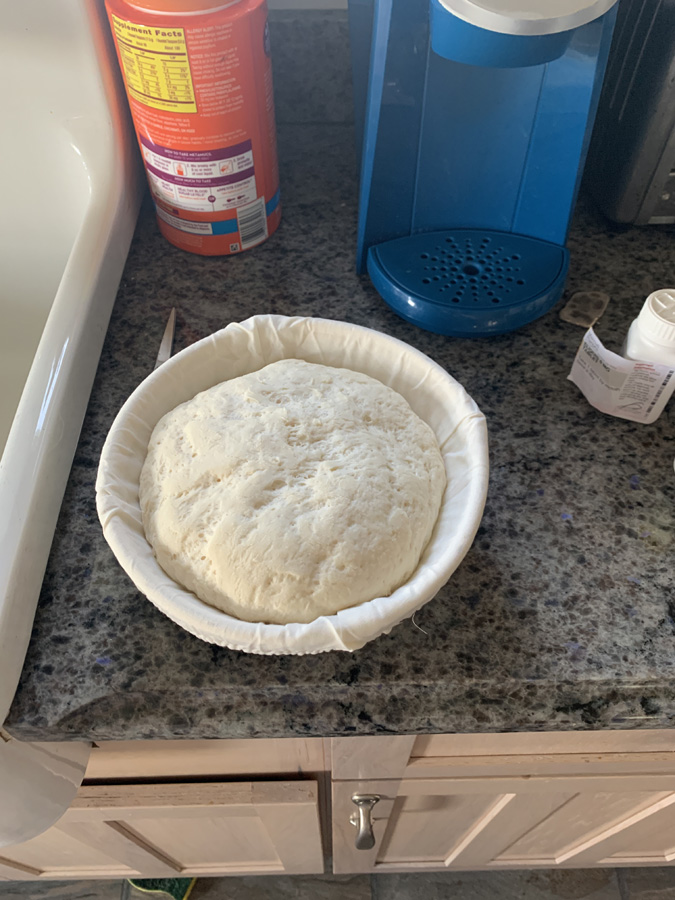 If you have never tried a basic flour/yeast dough, let me encourage you to give it a shot. It’s so easy that even an ancient Sumerian can do it. The recipe I used is this one: [jessica gavin] based on my familiarity with bread-making and ingredients. It’s basically yoghurt-bread.

Letting the yeast bloom: 20 minutes.
Kneading the dough: 15 minutes.
Letting it rise: 2hr while I mowed the lawn
Shaping it and frying it in a pan: 10 minutes 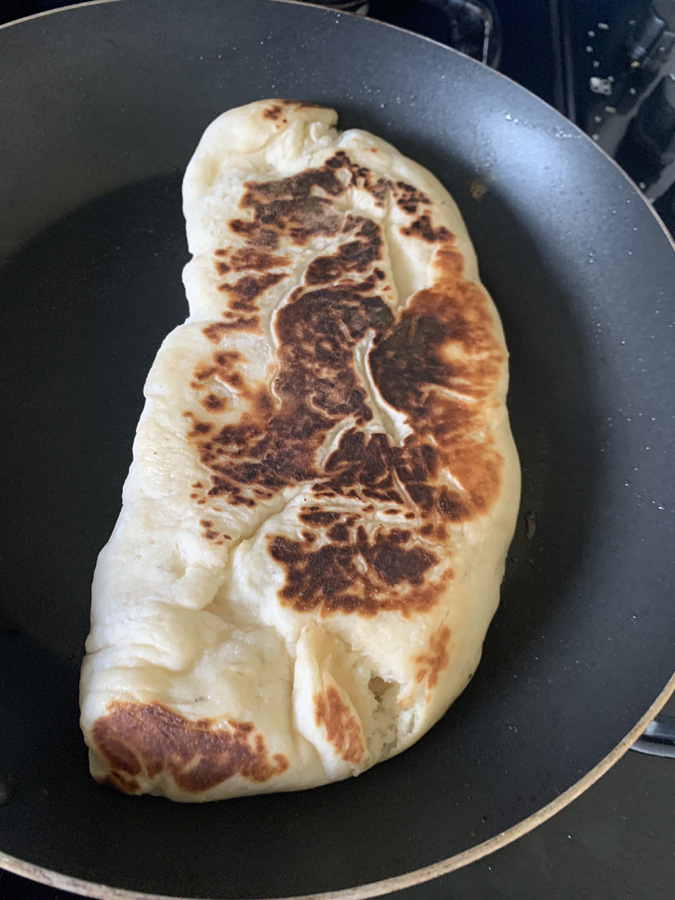 That’s a test naan. You can see it’s a bit thicker than it should be, but that’s why it’s a “test” – I really didn’t care if it turned out so long as the basic flavors and textures were there. When frying it was done, I dropped some chopped garlic in the frying pan, added some butter, bloomed the garlic, and poured it over the bread, then added some chopped cilantro. I don’t have pictures of the result because it did not survive on my plate long enough to photograph.

So let me conclude: what they say is true! Anyone can make great naan at home with virtually no effort. You should try it.

Another point: if you hang out with “preppers” 1) stop, 2) make sure that they understand your strategy is not to have more guns and ammo than you can carry, but rather to be the person who is so valuable mentally that the gun-toting goons will worship them as a tech-god. The person who can operate a lathe, repair small engines, build a generator, make a silencer for a rifle, cook naan and delicious curries, bottle pickles that won’t make you sick, or dry-cure pork – they’re going to be the valuable people. If you’re familiar with Mark Twain’s A Connecticut Yankee in King Arthur’s Court that’s what I’m talking about, and I’m pretty sure that’s where I adopted that attitude.  “Sir Boss” still ringeth rightly upon mine ear. I stopped hanging out with preppers because they got tired of my reminding them that they were disposable. [Am I the only person here who read Earth Abides [wc] by George Stewart? The main character, Isherwood Williams, winds up re-starting civilization after an apocalypse, simply by being a pretty sensible person who is interested in surviving rather than going around conquering things. It was really influential on kid-Marcus and it taught me that we are all disposable, our meaning is in our disposition.

An Unsettling Thought For Kids » « Hope