I get neo-fascist emails so that you don’t have to. Normally, I just delete them using my blisteringly fast keyboard skills – literally, I hardly notice that they appear and are gone, except I sometimes see a little subliminal flicker and think “I’m going to pull that out of the trash bin and have a look at it.” 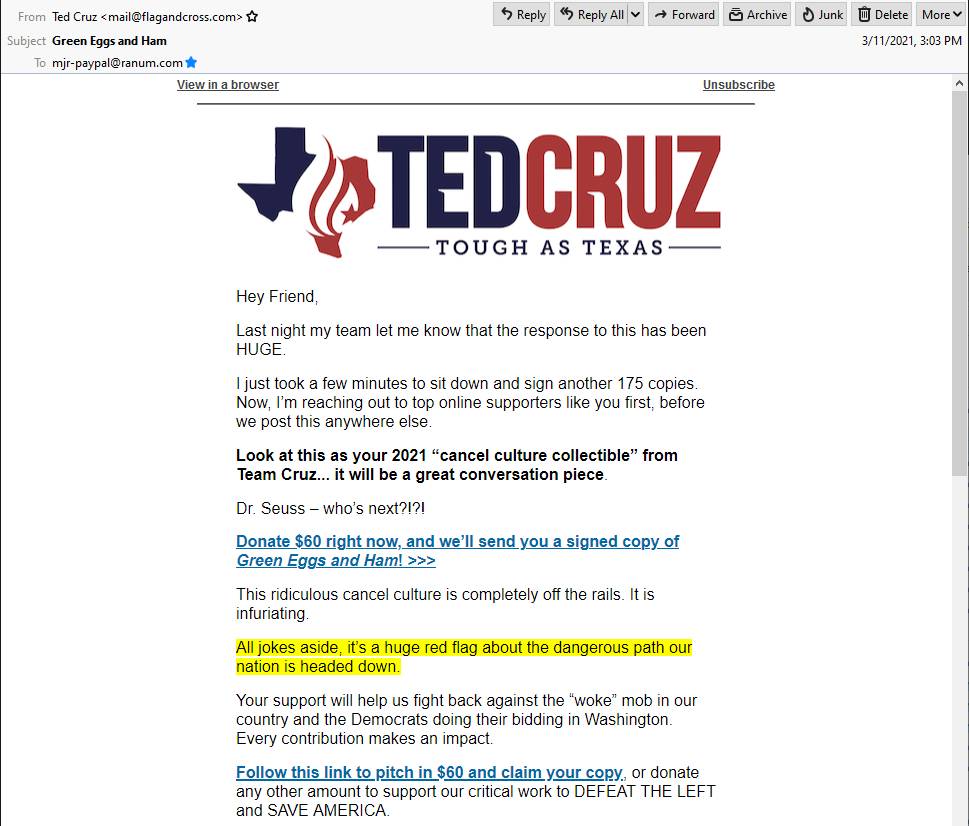 By the way: you may have noticed that Team Cruz used my mjr-payal@ranum.com address. That’s a “canary” address I set up years ago, using it as my paypal account – which is different from my Ebay and Amazon accounts (both of which are easy to find, if you care) – I did that deliberately so that there is no automatic linkage; if someone gets my amazon email at ranum.com they can try to brute-force that ID at paypal until hell freezes over because of all the bitcoin miners sucking energy out of the place. But, when I start getting email on the paypal account that tells me that someone sold that particular address to a spammer. In this case, that happened about a year and a half ago.

This is a good example of political propaganda from the neo-fascist media machine – i.e.: it’s a bunch of lies. Let me call your attention to the particularly yummy fewmet:

“This ridiculous cancel culture is completely off the rails. It is infuriating.”

The implication there is that there is an appropriate level of cancel culture, or something like that. Naturally, since I am a radical something-or-other, I support complete cancellation of certain ideas, i.e.: I think that overtly (even covertly, if we catch them) racist media ought to be shut down. Not because it’s going to stop racists from being racists – but it’s going to annoy the shit out of them (see above) and it’s going to make it a bit harder for them to get their message out. Only a bit harder, maybe not even at all – given that half of the US political system has openly embraced racism in its messaging, what they are really complaining about is that people like me want people like them to shut the fuck up. Not because it hurts our tender ears. Not because it wounds our feelings. But because the “opinions” they express (in the form of would-be ‘facts’) are wrong and stupid and it’s embarrassing to have to share a planet with them. Their version of “free speech” is farting in the elevator and giggling like stupid little boys that need to be spanked and sent to stand in the corner. [Note: I do not have children, and I am not in favor of physical violence against kids. I think punching Ted Cruz in the face is acceptable, even laudable free expression.]

What sucks, particularly, about Team Cruz’ email, other than that it’s merely fund-raising spam, is the bait-and-switch that the alleged Cruz is allegedly making: He wants more people to read Dr Seuss’ Green Eggs And Ham. That book is not one of Dr Seuss’ problematic racist propaganda pieces. I’m not aware of anyone trying to cancel that book, Sam-I-Am. No-one wants to cancel Green Eggs And Ham.

The thing that the neo-fascists don’t seem to understand is that the collective “we” aren’t trying to “cancel” Dr Seuss – we’re trying to rescue him from utter shame. Like Team Cruz, there are some of us who think that Green Eggs And Ham is still pretty cute drivel, appropriate for kids, and that we don’t want to flush his entire body of work down the drain just because about 25% of it is racist crap. And, I mean crap. Crap that was intended to promote ethnic stereotypes of Japanese-Americans prior to interning them in concentration camps. You know, real old-school “cancel culture.”

DEFEAT THE LEFT AND SAVE AMERICA BY BUYING A COPY OF Green Eggs and Ham for $60 instead of $5.98 on Amazon. Be Texas Tough!

This is how stupid they think their constitutents are. And, they’re right. Why isn’t Cruz showing the drawings by Dr. Seuss that have been cancelled? That’s what he’s defending against “cancel culture” – a bunch of overtly, crudely, racist shit.

Also: Ted Cruz’ autograph-signing machine is apparently being used to make ink-marks on some of the copies of the book. As a bibliophile (2nd rank, non-rabid) I have to ask “who the fuck does Ted Cruz think he is?” He’s got no business signing someone else’s book – he’s just lowering the value, which is a trick for a book that cost $6. A Seuss-signed 1st edition of Green Eggs And Ham appears to be fetching $7,000 – $9,000. So, the free market has spoken, Cruz, and what it says is “please fuck off.”

I used to teach classes at USENIX on spam-blocking, back in the early oughts. That earned me some inclusions on various spammers’ spam-lists (ha, ha, those guys are so clevurrr!) Tit for tat. I mentioned that to Some People who, at the time, were policy-promoters at ICANN, and was invited to write a paper on how spam was a security threat (spoiler: it is!) – which was published under ICANN’s imprimatur, resulting in my getting even more spam and a bunch of phishing attacks. The spammers just could not resist proving my point for me, it appears. I’m sure that this email actually had no input from The Real Ted Cruz because it’s not quite stupid enough, but it’s an interesting way-point on the evolution of spam-as-politics and political grifting. In other words, it is a vision of the future of the US political parties.

The Doors » « Photography in the Age of Photoshop