Shiro Ishii goes right in the book next to Josef Mengele; a “failed intellectual” in the description of William Shirer (The Rise and Fall of The Third Reich) who noted that many of Hitler’s nihilistic genociders were, like Hitler himself, academics and philosophically-inclined people who veered off the normal track and careened into the dark woods.

There is something especially creepy about these people who cover their nihilism and sadism under a veneer of curiousity. It as if they aren’t quite brave enough to come right out and just say, “because I like to hurt people” like Orwell’s O’Brien in 1984 – they have to come up with a semi-plausible intellectual framework that lets them claim it was curiousity. Or, perhaps, they were just following orders. I don’t hold much for psychological language, but these people are psychopaths, or sociopaths, or some other word denoting a very sick person, indeed. For one thing, it takes a complete lack of empathy. But, when you read Mengele’s notes, he’s enthusiastic – you can tell he’s really into it. These are men who bounced out of bed in the morning, and went to the office, their minds brimming with all the interesting things they were going to do today. We have to either reject them as monsters and dehumanize them, or accept that such people are all too common and are actually ordinary.

Shiro Ishii [wik] like his contemporary Mengele, was a trained doctor. His interest, as a student at the Imperial University in Kyoto, was bacteria. His fellow students remarked that Ishii was interested above all else in bacterial cultures that he made and grew. In 1925 he was promoted to Army Surgeon, First Class. In the early 1930s, Ishii continued a path of promotions, and began arguing that Japan should start a bioweapons program. Eventually, the Japanese military created Unit 731 and put Ishii in charge. Ishii began experimenting on human subjects, trying to learn how to weaponize various pathogens to create artificial plagues – the eventual intent was to de-populate conquered territories like Korea or parts of China.

Ishii was not discrete about his work. In fact, some of Ishii’s old facility have been discovered and analyzed. [guard]

Authorities in Japan have begun excavating the former site of a medical school that may contain the remains of victims of the country’s wartime biological warfare programme.

The school has links to Unit 731, a branch of the imperial Japanese army that conducted lethal experiments on prisoners as part of efforts to develop weapons of mass destruction.

The government agreed to launch a ¥100m (£741,000) investigation after Toyo Ishii, a former nurse, said she had helped bury body parts on the site as the US occupation forces moved into Tokyo at the end of the second world war. Officials said so far there was no evidence the site had been used for experiments.

Ishii, 88, broke her 61-year silence in 2006, claiming that she and colleagues had been ordered to bury numerous corpses, bones and body parts in the grounds following Japan’s surrender in August 1945.

I have to wonder at the mental gymnastics that allow someone to think “that old lady’s got to just be making this shit up.” Because, seriously, why would anyone make up a story like that, which implicates them in literally burying the bodies? 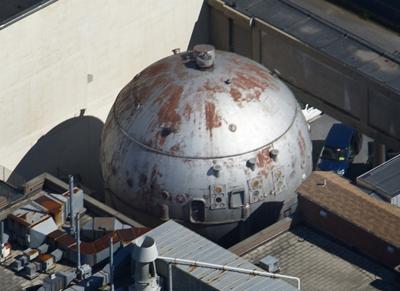 Ishii was brought to justice at the end of the war, of course. He was arrested and was supposed to be interrogated for the record, but – the US Government decided instead to grant him immunity and spirit him back to the US, where it emplaced him as a senior researcher at USAMRIID, the bio-weapons division of the US Army, at Ft Detrick, MD. Ft Detrick is an interesting place; I have two friends who grew up on the post, one of whom was the daughter of the commander of the medical unit there. When he was dying of a brain tumor, he began to hallucinate that the men in black suburbans were going to come silence him so he didn’t blurt anything out under the influence of the morphine. That’s a man with some skeletons in his closet for sure. Meanwhile, my other friend used to play around the giant steel ball on stilts that I believe is still there. [wik] The “One Million Litre Test Sphere” suitable for measuring aerosol dispersion. Just remember that picture when you hear the US press talking about bioweapons in the Middle East and how the US knows what bioweapons research looks like. My friend Jenna says that if you whack it with a pipe-wrench it makes an amazing sound.

Ft Detrick, by the way, is where the US maintains one of its BSL-4 (BioSafety Level 4) facilities, for handling the worst pathogens. That’s the pressurized room where people wear space suits, as has been featured in pretty much every movie about pandemics, ever. It is also where the US maintains its strategic reserve of smallpox virus – you know, in case they need to “experiment” with it again. When the Russians do that, we call it “biowarfare research” but we’re the good guys. Lovecraft might have been thinking of Ft Detrick when he wrote:
“That is not dead which can eternal lie, / And with strange aeons even death may die.” 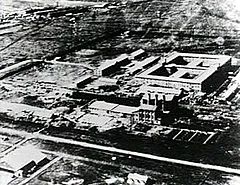 Shiro Ishii was like bio-warfare’s Wehrner Von Braun, the designer of the V-2 missile that the nazis attempted to use to flatten London. Like Von Braun, there were probably “widows and cripples in old Manchuria / who owe their large pensions to Shiro Ishii.” Except none of Ishii’s victims got pensions. Ishii’s Unit 731 facility in Harbin, China, had a prison built into it – like Mengele’s – for convenience. We don’t know anything declassified about whether they had human subjects at Ft Detrick, and it does not appear that Ishii or USAMRIID had any involvement with things like the Tuskeegee experiments. When will documentation about Ishii’s activities be declassified? Maybe never.

Ishii died of cancer in 1959. The Wikipedia page on him notes that he converted to catholicism right before his death, a typical brave christian who wanted to avoid the hellfire of retribution that would come his way if there were a god that was concerned with justice.

That’s the thumbnail sketch of Ishii’s story arc as a piece of shit. [stderr] I’m going to write a second part to this piece, eventually, which is more speculative. It seems a good idea to divide the well-established facts from the less certain things that come later. It appears that Ishii did get back to his old tricks. Are you surprised?

On the Receiving End » « A Lovely Article About Incipient Death