My theory of republican projection predicts that the reason republicans are so “worried” about vote fraud in mail-in ballots is because they’re frauding the hell out of things. We’ll see. Out here in Pennsylvania, on the rural back road, there is zero excitement for Biden; it’s all Trump signs. And confederate flags.

For the last couple of weeks, I have been getting txtspam – always from the same number, always incompetent bullshit. I’d have blocked the number except it’s interesting in the same way that watching a cruise ship hit a dock is interesting. Do Trump’s fans get inspired by this and send their money? I can’t imagine it, but I can’t imagine Trump as president and it has been nearly 4 years. 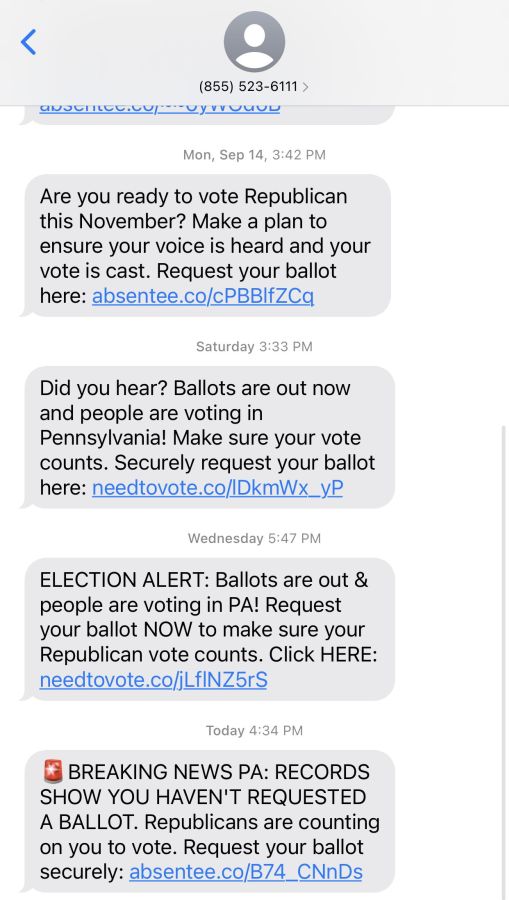 Those republicans sure do seem to love the absentee ballots! You know, those incredibly fraud-ridden, corrupted things? Anyone more intelligent than a house-plant ought to notice the contradictory messaging going on, here, but as a former security guy what blows my mind is the thought that someone is expected to click on one of those links and give up their voter information.

I did the experiment, on my heavily locked-down system I used to use to decompile phishing attacks, and the websites in question are malfunctioning. That, or they are trying to download malware to my machine but can’t learn enough about the software loadout to select the correct payload. I’m not going to invest any time trying to figure out what’s going on.

The last one bothers me a bit: “RECORDS SHOW YOU HAVEN’T REQUESTED A BALLOT.” I’m assuming that’s a bluff and that they actually have no idea. In fact, I have no idea how they got my phone number in the first place. This is another example of why, as a security guy, I complained when lawmakers left cut-outs in anti-spam legislation for important political messaging. Sorry, pols, it’s spam no matter who’s sending it.

Another thing I have noticed is some social media are now including “get your absentee ballot here!” links. Those aren’t postings by Joe Rando spammer, they’re built into the engine of the site:

I expect that such advice is going to have an effect. This election, more than any other, is going to belong to the young, and anything that motivates them to get ready to vote is a good thing.

The first sets of spam I got from that number were more like something penned by the great Alfred Jarry: 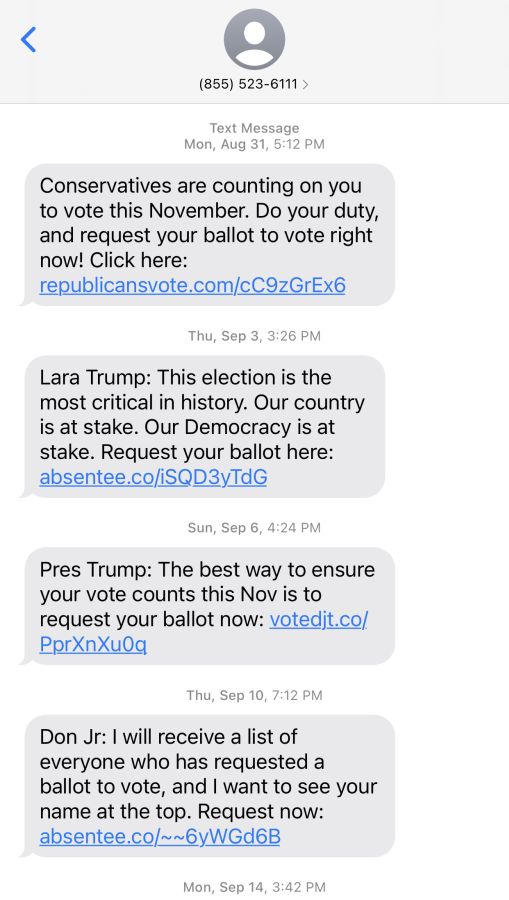 Am I supposed to believe that the message came from Don Jr.? Or Pres Trump? Who is Lara Trump? What the fuck? The randomly hashed URLs are so encouraging. Yes, I checked a few of those and the DNS resolved all to the same address (at the time) and the site was down, or couldn’t figure out what malware payload to send me.

The idea that Don Jr will receive a list of everyone who has requested a ballot to vote is … unsettling, if it were true. But I’m not worried, because Don Jr’s so coked-up he’ll have trouble focusing on the list and searching for my absent name.

Mostly what I am taking away from this is how terribly bad political marketing is. This is below incompetent; it insults the intellect of the very people they are (allegedly) reaching out to.

There is so much action going on around trying to get people to sign up for absentee ballots that I believe there are big opportunities for fraud – not by trying to submit double votes, but by trying to muddy the water to the point where voters go to some rando site, give their personal information, and are told, “your vote has been counted” – then they later find out they didn’t actually cast a vote at all. I’m going to drive the 4 miles up the road to the polling spot, just to see what’s going on (and vote); liberal nightmares include gun-toting rednecks outside of the polling spot, but I’ve yet to see anyone, not even a cop. And never a line. It’s tempting to walk in there strapped with cameras but I don’t think there’ll be anyone there to photograph. And I’ll leave my L1A1 (which I can legally carry in my truck) at home; I won’t need it but it’s only 4 miles if I have to run get it.