A fellow computer security hacker is going to be joining me for the next few days, while I teach him how to make a knife.

So, I expect I’ll be working in the shop pretty intensively. I’ll take pictures and post notes if I have any energy left in the evenings. It’s going to be a busy few days. Normally, I proceed at my own pace but (as some of you know) that sometimes is a bit bursty and something might sit on the bench for months while I try to figure out what to do, next.

The fellow who’ll be joining me will be referred to as ‘Q’ – like a character from James Bond, or something. I believe he got that nickname because he’s done some really amazing stuff with cellular phone protocols (which sound like a mass of swiss cheese, to me).

I’m looking forward to this; I enjoy teaching and – even though it wears me out – I think I’m pretty good at it. Well, I made a good living teaching security stuff for nearly 25 years so I can’t have sucked too badly. So I’ll be having a blast.

We’re starting tomorrow morning (sunday) at breakfast, while we eat some popovers and try to figure out what we are making. I mentioned this in my posting about options for forging Kunai [stderr].

And just for the sake of randomness, here’s a picture of a mini-yanagiba (leaf-shaped slicer, in Japanese) that I made on Thursday out of a scrap chunk of 4-ply cable damascus. That’s taking a chunk of cable welded into a bar, then cutting it and stacking it and welding it again – so it’s got a very dense grain. Which you can’t see because I mirror-polished it anyway. The bolster is more of that amazing synthetic resin ivory (I am tempted to make my own; I think I know how it’s done!) and the handle is bog oak soaked in linseed oil. 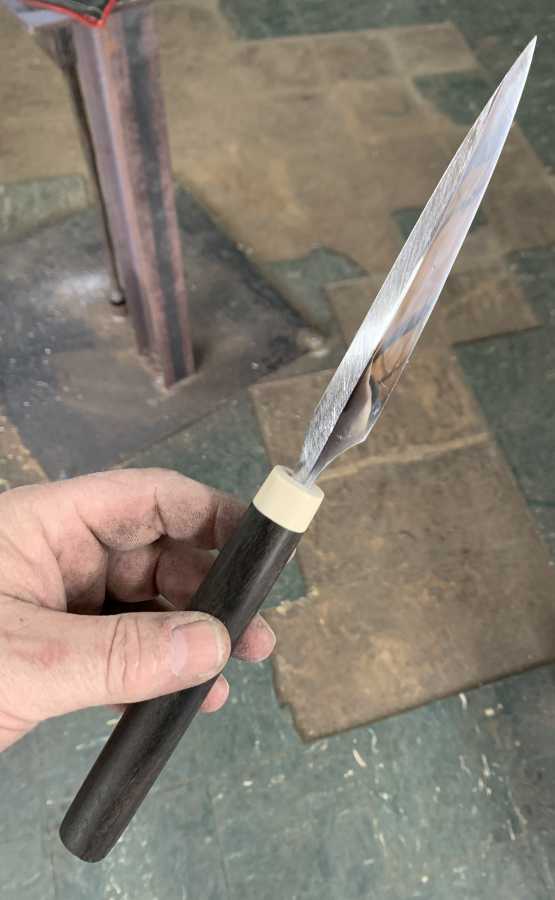 Because it’s small, it’s thin, so it cuts really well. The chisel grind also came out pretty clean, too, which makes me very happy. I’m also becoming fond of doing a mirror polish on the bevel and a hard rasp finish on the shinogi (upper flat). It’s a bit flashy but it contrasts nicely with the bevel and it’ll age well.

I may actually keep this one for myself; I like it a lot. It would be odd to be cooking using one of my own knives, though.

“Made on Thursday” – the steel was already assembled, so that saved me a great deal of time. Basically, all I did was rough shape it then start grinding. Small thin blades go fast because there’s not as much metal to remove. On this one I was very worried that it would bend when I quenched it, but the dense-packed cable seemed to be pretty dimensionally stable even though the blade was quite thin.

It looks like I may have another guest in late May, which means that I’m being a veritable social badger.