In the comments on my previous posting, someone mentioned deep sea oil rigs. Now, there’s a captive work-force. So, I was curious.

Sure enough, it’s a captive work-force. You are not allowed to bring alcohol or other drugs, naturally, onto the platform. I was surprised by the shift structure: on some rigs they run 12-hr shifts but then rotate the teams in and out of a rig 2 weeks on/3 weeks off. According to: [experience] 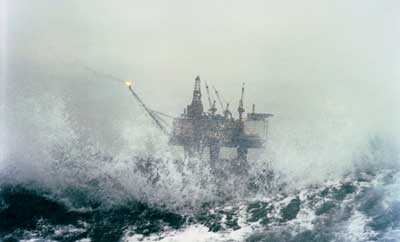 welcome to the world of “nope”

I guess with the long shifts that comes out to $25, for some hard dangerous work 120 miles from anything. There are plenty of advantages, though: you get good time off and some workers take grueling schedules in the winter months then spend the summer at a beach. It’s rough, tough, gig work. As always, being on good terms with the people who make up the schedules is important, so you can get the good rotations instead of winding up in the North Atlantic in the winter. I was surprised to see that many sites describe living on an oil rig as enjoying “4 or 5 star accomodations.” Whoever said that is probably not speaking from having experienced the executive lifestyle.

A lady I used to sometimes hang out with, who was (at the time) a journalist covering information security, used to work as a mud calculator on a rig down near New Orleans. She said it was pretty cool, really, except for the one time a guy got wrapped around the drill and went through the collar and they had to fish all the big chunks out and bag them up. But that, honestly, doesn’t sound as dangerous or stressful as working as an Uber driver in Los Angeles for $8-11/hr depending on how hard you work, without benefits.

It oughtn’t surprise you to discover that offshore oil rig workers are unionized. It might surprise you to know that the Obama administration put in place more stringent requirements for safety inspections on rigs, which the Trump administration rolled back, because they love the working man so much. [concerned scientists] It makes me wonder, if the coal jobs were brought back, wouldn’t Trump and his cronies try to make sure the coal companies were able to set up mining towns with company stores and Baldwin-Felts’ guards? It actually might be necessary, in order to make coal economically viable again.

So, capitalism can be 38% more efficient if it gets rid of unions and pockets the difference? <snark> I wonder if that has been driving any employment trends we’re seeing? </snark>